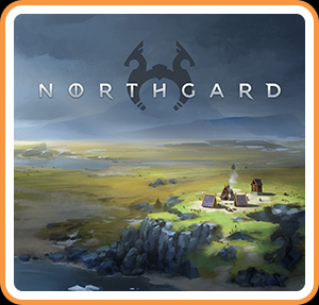 This Switch port has its shortcomings compared to the PC original, but portability makes the trade-off worthwhile.

Northgard is a real time strategy game based around Norse mythology. Originally released on Steam Early Access in February of 2017, and officially launching one year later on March 7th 2018, the game has now received a competent port to consoles. Not all elements of this RTS function as flawlessly on console as they do on the PC, however the transition is handled well enough to be a solid addition to the Switch library.

From the onset, this is a Viking tale of revenge. You play as Rig, prince and son of the high king. After your father and his men are slaughtered by Hagen, leader of the Raven Clan, you set out to avenge his death. This journey will lead you to seek out new land. Land filled with mystery and danger, crawling with dire wolves, giants, and the undead. A new world with winters so harsh even the boldest Vikings will shiver. Set sail to discover and conquer this new land, known as Northgard.

The idea of any RTS is basic enough. Colonize map tiles, expand your territory, and claim victory by any means necessary before your opponents do. The premise is simple. Accomplishing that task is anything but. In Northgard each tile requires Krowns (money) to purchase, usually dirt cheap at first. By the later stages of the game, though, it can break the bank to purchase even one more tile of land toward your expansion.

Individual tiles can only support so many structures, each of which requires resources to build. A Woodcutter’s Lodge allows you to gather wood, while a Brewery will produce the Happiness resource.  Picking and choosing wisely can make the difference between a successful conquest and failure. In addition to that, you'll need to build houses for your ever-growing civilian base. Each civilian can be assigned to structures to produce your colonies' resources; Food, Wood, Happiness, Lore, Krowns, Stone, Iron, and Fame.

Northgard has the traditional technology tree known as the Lore Tree, requiring Lore to unlock its many talents. Each unlocked talent will be a boon to your clan, like “Sharp Axes”, which produce 20% more wood production, or “Recruitment”, which increases population growth by 25%. Most talents are shared among all clans, but each clan has specialty nodes, allowing you to customize your playstyle further. The Lore Tree may not be as complex as in other strategy titles, but there is enough variety to make it your own. 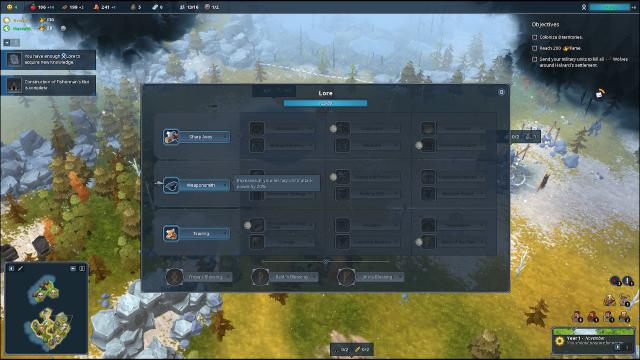 Claiming your crowning achievement of victory can be done in one of four ways. First and most popular, crushing your opponents beneath your mud-covered war boots, better known as Domination. For the less blood thirsty, Fame is a viable option. By gaining enough territory and completing different acts or objectives, you can earn enough Fame to obtain the title of King. A third route to victory can be realized through the art of Trade. Amass riches to become the greatest merchant in Northgard. Finally, there’s the Wisdom victory. A path for those practicing the way of the turtle. Hunker down, hold your ground, and gain as much lore as you can to become the wisest clan leader in Northgard.

Any one of these roads will lead to triumph, but you still have to do it all before your opponents. That and keep your resources in the positive. Oh, and keep your colony happy. And don’t forget to repel the enemy forces that are hell bent on claiming victory and the land for themselves. All while dealing with oppressively frigid winters (which add resource penalties), the ruin of earthquakes (which damage your structures that will then need repairing), and the plague of rat infestations (which can ruin food resources and make civilians sick), to name a few. Simple, right? 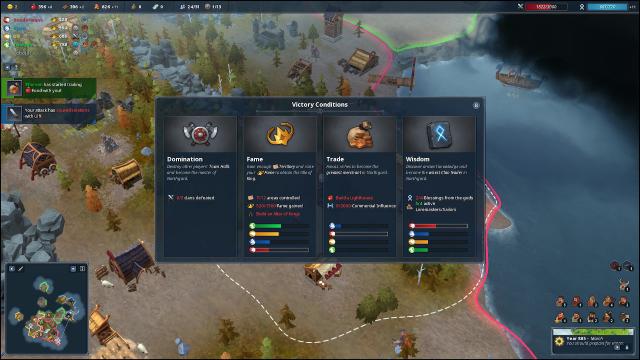 Northgard offers four different ways to play: Solo Story Mode, Single Player Skirmish, Northgard Ragnarok (survival), and Online Multiplayer (competitive and co-op). It’s usually a good idea to get familiar with any RTS and its game specific mechanics in story mode first. Single Player Skirmish allows you to setup the game parameters like map size, map type, starting bannerman, and number of AI opponents, amongst other options. This is a good starting point after getting your feet wet in Story Mode but prior to getting trounced in online multiplayer. Finally, Ragnarok is a survival mode that introduces new tiles and features centering around a volcano in the middle of the map.

I started my time with Northgard in Story Mode, which also acts as your tutorial. Broken up into chapters, it proves a solid introduction to the game's basic mechanics. These chapters start by assigning a bannerman (a leader of sorts) with unique Starting and Fame bonuses. You're presented with a new bannerman every few chapters, giving you a feel for their different perks and playstyles. Fenrir of the Wolf clan, for example, provides the Meat resource when killing wolves or brown bears. Huginn and Muninn, on the other hand, can colonize territories with Krowns instead of the food resource.

Story Mode’s victory conditions do a good job of prodding you to get out of your comfort zone and pursue victory in other ways. Bonus objectives are also hidden until completing the chapter for the first time and act as an incentive to go back and replay each map in different ways. 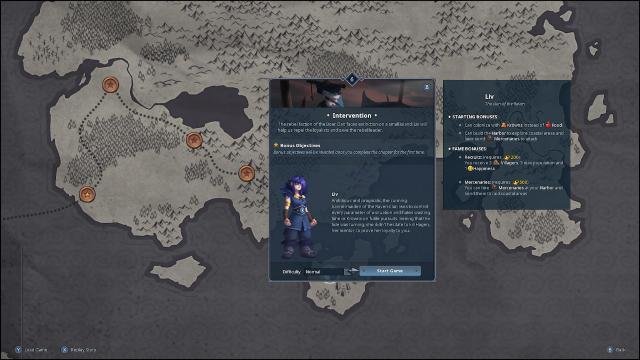 You can’t kick back and engage auto-pilot in Northgard, as the action can be rather fluid. Fine tuning the balance of your civilians is one of the main focuses here. Are you producing enough wood and food? If so, do you have enough militia to guard your borders? How about healers? After a nasty scuffle with a bordering enemy you’ll need to heal up. Having wounded in your population causes your happiness resource to drop, and in turn production falters. It’s this aspect of Northgard that you can obsess over and get lost in, becoming utterly absorbed by the flow of the seasons and the progress of your colony.

One minute things look demoralizingly bleak, as an extreme winter causes your food and wood resources to plummet at -20 each per second, but after scrambling to shift some units around you mitigate the damage to -7 and -2 respectively. Once winter finally passes, production is back up +16 food and +11 wood per second. With all your positive gains flowing in, you can redirect a few of your villagers to become Axe Throwers and Warriors. You head for your northern border and slaughter the adjacent opponent, who just last winter destroyed your defense tower. A swift and decisive victory. This land now belongs to you! Time to develop.

Lucky for you, this tile has a grain field and stone. With a few taps on the controller you erect a quarry to start mining stone to be used for house improvements and training camp upgrades. You plow the fields and assign your villagers to start gathering wheat. Productions up to +31 food and +22 wood. Next winter is still a way off, so where to next? 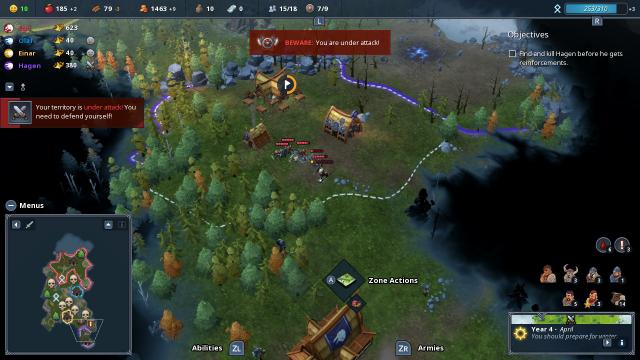 The more I played Northgard, the more I enjoyed it. It doesn’t always do a very god job of explaining things, but with time you gain familiarity with elements you were previously befuddled by. Some concessions are always made when bringing an RTS to consoles. Not having that point and click action of the mouse can make some tasks more cumbersome. The console versions use the icon wheel for selection and the face button cross menu for the most frequently used actions. It's rather limiting but passible.

Annoying little variations between platforms can get frustrating. Still, I’d rather have it available to play on my couch or on the go than not at all. Discrepancies are minor and generally tolerable. I was, however, very dissatisfied with the small text UI, especially knowing the PC version has options to enhance it. While playing in docked mode, I had to sit within a few feet of the TV to read the text. In handheld mode, though, it wasn’t an issue.

Northgard performs well in both docked and handheld mode. Unfortunately, I wasn’t able to find an online multiplayer match to test server performance. The graphics aren’t anything to write home about. You can zoom in and out, but usually you want a more zoomed out overview. When I did zoom in, say on the battles, it was rather rough looking. As for stability - save often! Hopefully it will be patched at launch, but I ran into multiple game crashes, always at the worst possible time.

Northgard is an excellent RTS. The Switch port has its shortcomings compared to the PC original, but portability makes the trade-off worthwhile. While I would have liked more map variety visually, the mechanics work well, and you’ll soon be focusing on the stats and not the graphics. With six unique clans and a variety of game modes, no fan of the genre should miss out on Northgard.

This review is based on a digital copy of Northgard for the NS, provided by the publisher.