Fell Seal: Arbiter's Mark looks to fill the void left by dormant series Final Fantasy Tactics and Ogre Battle. Altogether it's a rock-solid, if derivative take on turn-based tactics, with accessible gameplay, satisfying strategy mechanics, and an incredibly-deep class-based customization system. Most impressively, this handsome, content-rich production is a crowd-funded Kickstarter title created by only two people, Pierre and Christina Leclerc, under the banner 6 Eyes Studio. Considering the relatively small budget and team size, what the Leclercs have designed is mighty impressive—although it's not without a few small flaws.

Set in a high fantasy world with a dash of steampunk, Fell Seal follows a group of Arbiters, semi-autonomous law officers who report directly to the Immortal Council, a group of eternal rulers. Determined to avoid a great catastrophe, the likes of which saw them rise to power a thousand years ago, the Council has invested great authority into the Arbiters, who operate across the land as judge, jury, and executioner—think street judges from Judge Dredd. When corruption starts to spread throughout the Council and the order of Arbiters, a by-the-book Arbiter, Kyrie, moves to discover the source of the misconduct. 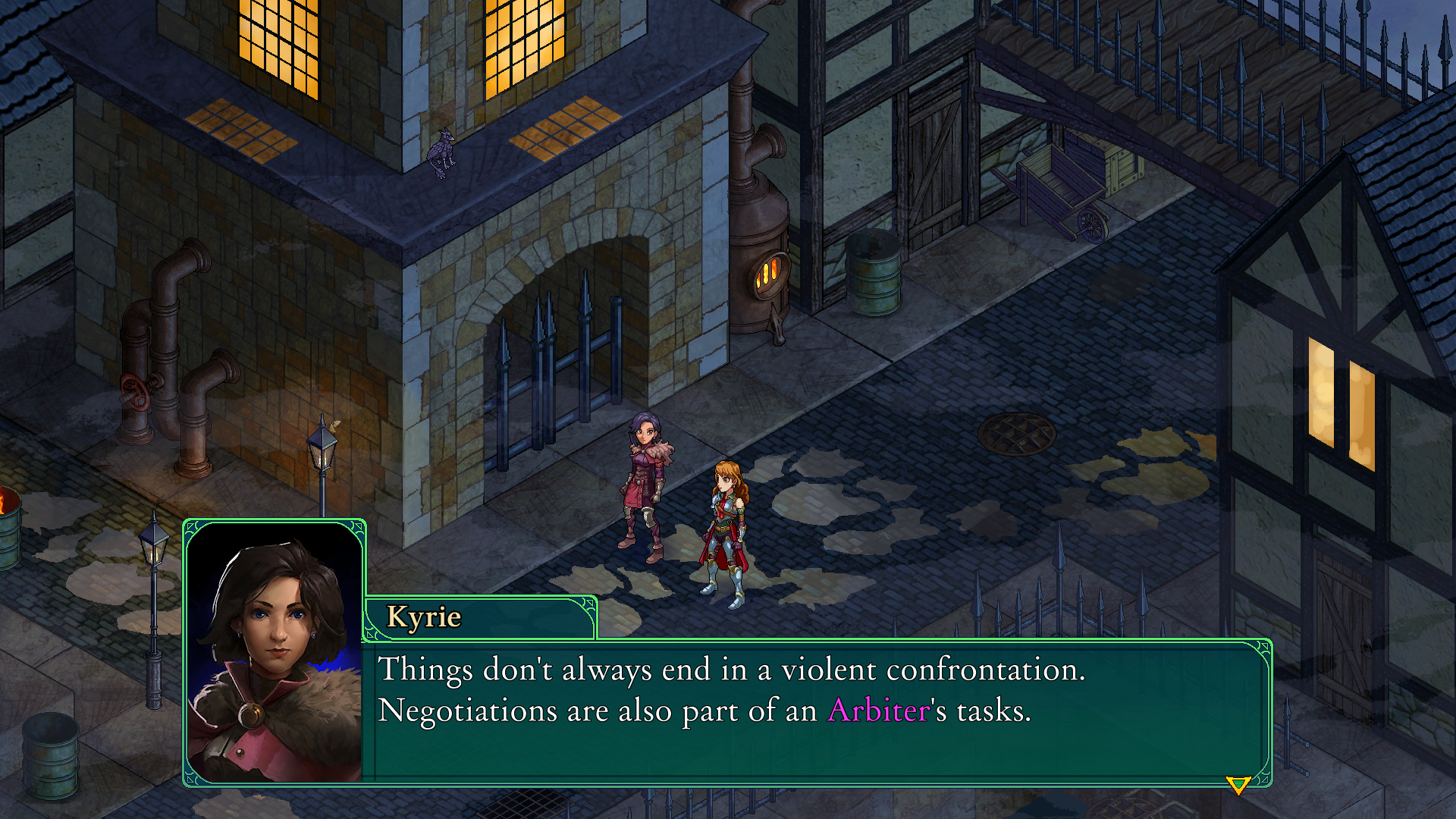 Although narrative is a large part of the game—the developers describe it as a "story-driven tactical RPG"—it mostly conforms to standard role-player archetypes and tropes. Kyrie is the no-nonsense captain; her protege Anadine a slightly-naive recruit; and her confidant Reiner a sarcastic chaotic neutral. There are some twists and turns along the way, but for the most part the plot in Fell Seal is your typical RPG fare.

Far more interesting are the nuts and bolts of the game: turn-based tactics, class-specific abilities, and the freedom to mix and match classes and sub-classes to form unique builds. Like the classics that inspired it, Fell Seal is an isometric, turn-based role-playing game where several character types move along a grid map, taking offensive and defensive actions; casting spells, buffs, and debuffs; and using topography and combatant position to create an advantage. From an overworld map, complete with flowing waterfalls and wispy clouds, players can move back and forth between dozens of nodes, each with a battle scenario, story event, or shopping opportunity. 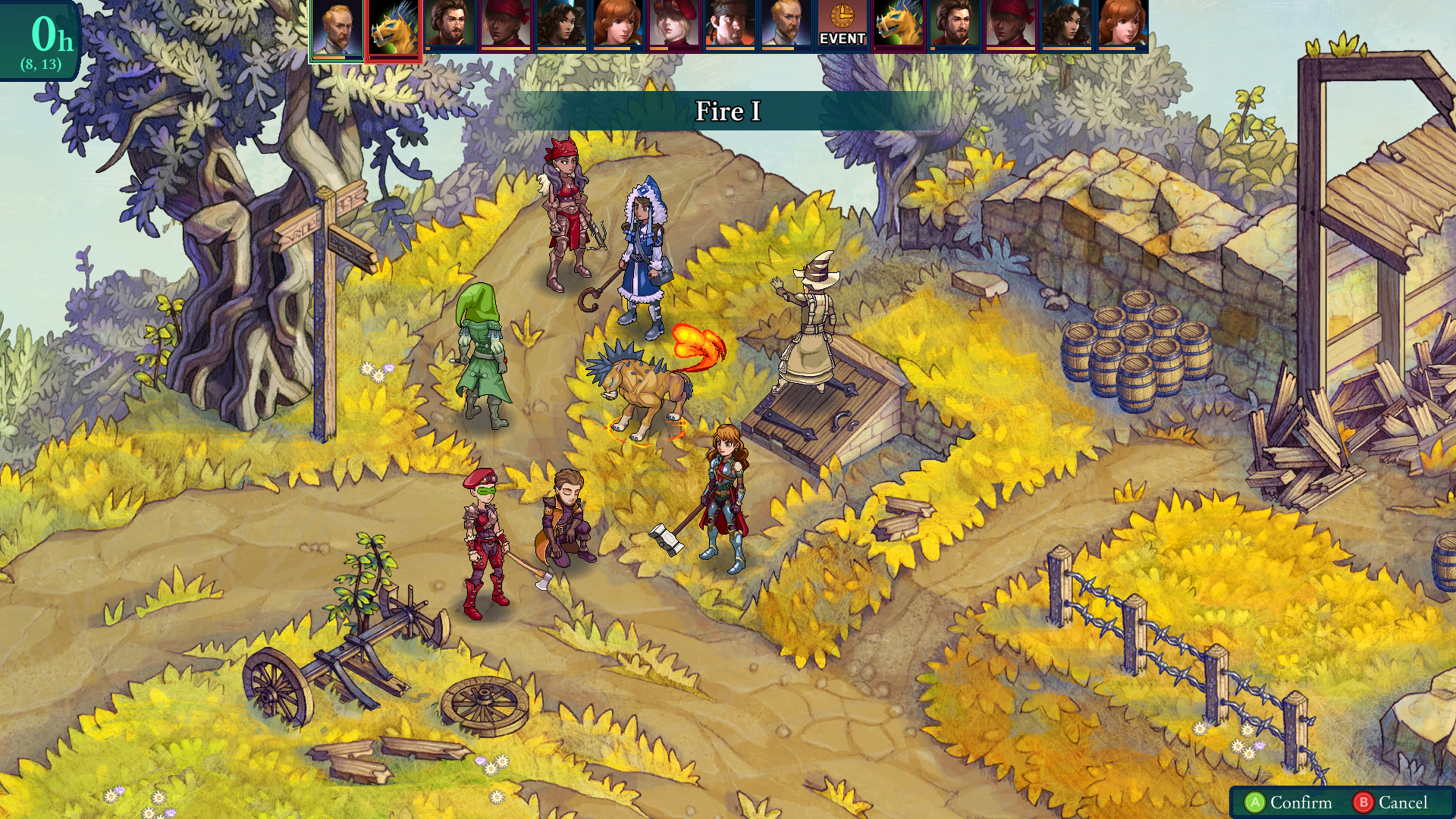 The flow of battle is rewarding and dynamic, although if you enter a fracas with the wrong party or classes you may be in for a war of attrition. You'll begin by choosing your allies and placing them in their starting positions. From there, each hero and enemy takes its turn, according to its speed stats. Each player character enjoys a range of moves and commands, inspired by its class. Mercenaries, for example, are good all-around fighters with several offensive maneuvers that either attack while negating any counters or push a character back one space—particularly useful when several monsters are lined up in a single file or when one stands on the edge of a cliff—while wizards control elemental magic. At the end of each move, you'll set the angle at which your character is facing; this is essential as blows from the side and back do extra damage. Pro tip: assign "No Flank" to your knight, so that all attacks against him or her are considered to be from the front.

Not only does positioning determine the severity of attacks, the topography and layout of each map will often determine who wins each skirmish. Each class comes with two movement stats—maximum horizontal movement per turn and maximum vertical distance it can travel from one space to the next. If you have several characters with low values for this latter stat (Jump) you may need to find the long way up a mountain, all while rangers and wizards rain arrows and spells downward. If an enemy gunner owns the ability "height advantage" then watch out - it increases damage done by 0.05x for each height value the character has over the target. 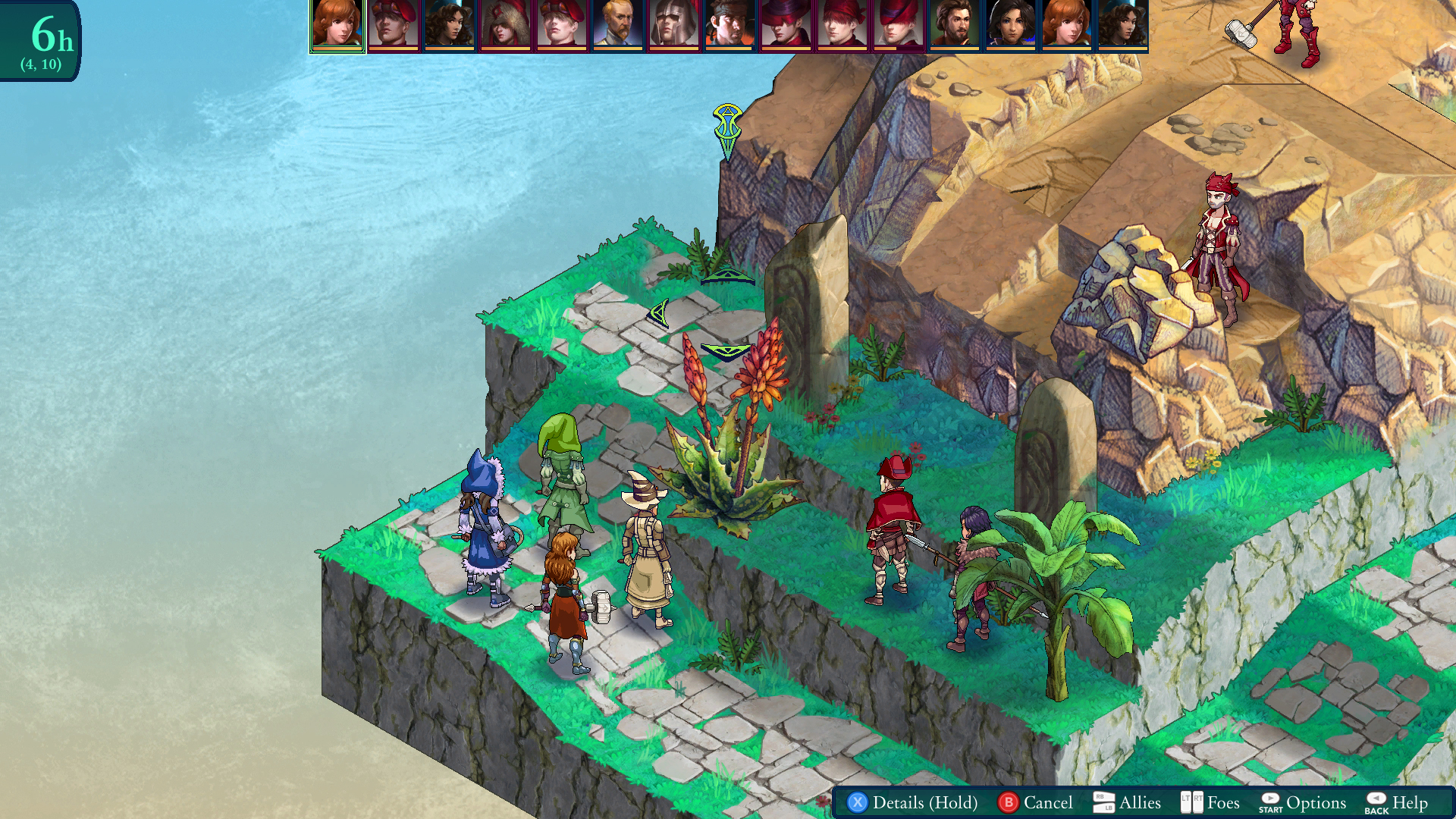 Even on easier difficulty levels, Fell Seal introduces some challenging enemy encounters, so allied characters can and will fall in battle. Unless you've selected the permadeath option, fallen heroes are not permanently lost; instead, they leave the playing field and suffer an injury, which lasts until they rest, i.e. sit out one subsequent fight. You could force them into the next battle, but their stats will be lowered. This punitive system compels players to create back-up characters via guilds in each town to stand in for fallen favorites. The only problem: unused characters receive only a fraction of the experience points awarded to active participants, meaning that when you do need to substitute a bench player he or she will be woefully underpowered. You'll need to do a bit of grinding to keep your entire entourage ready for prime-time.

To make the game more egalitarian, 6 Eyes Studio has added several conveniences for newcomers and turn-based tactics vets alike. The first is a range of difficulty settings, where players can install permadeath, weight RNG in their favor, alter raw stats scaling, and raise or lower the amount of gear and items enemies carry. The second is a "try and buy" option in weapons shops that allow you to equip an item—and therefore observe its effects on character stats and its quality compared to currently-equipped gear—before you spend your hard-earned coin. The third is an intriguing (and possibly polarizing) item usage system. In Fell Seal, items have a limited number of uses but they automatically restock after each battle. You can never purchase items, only increase the potency, per-battle uses, and types available via the crafting menu. 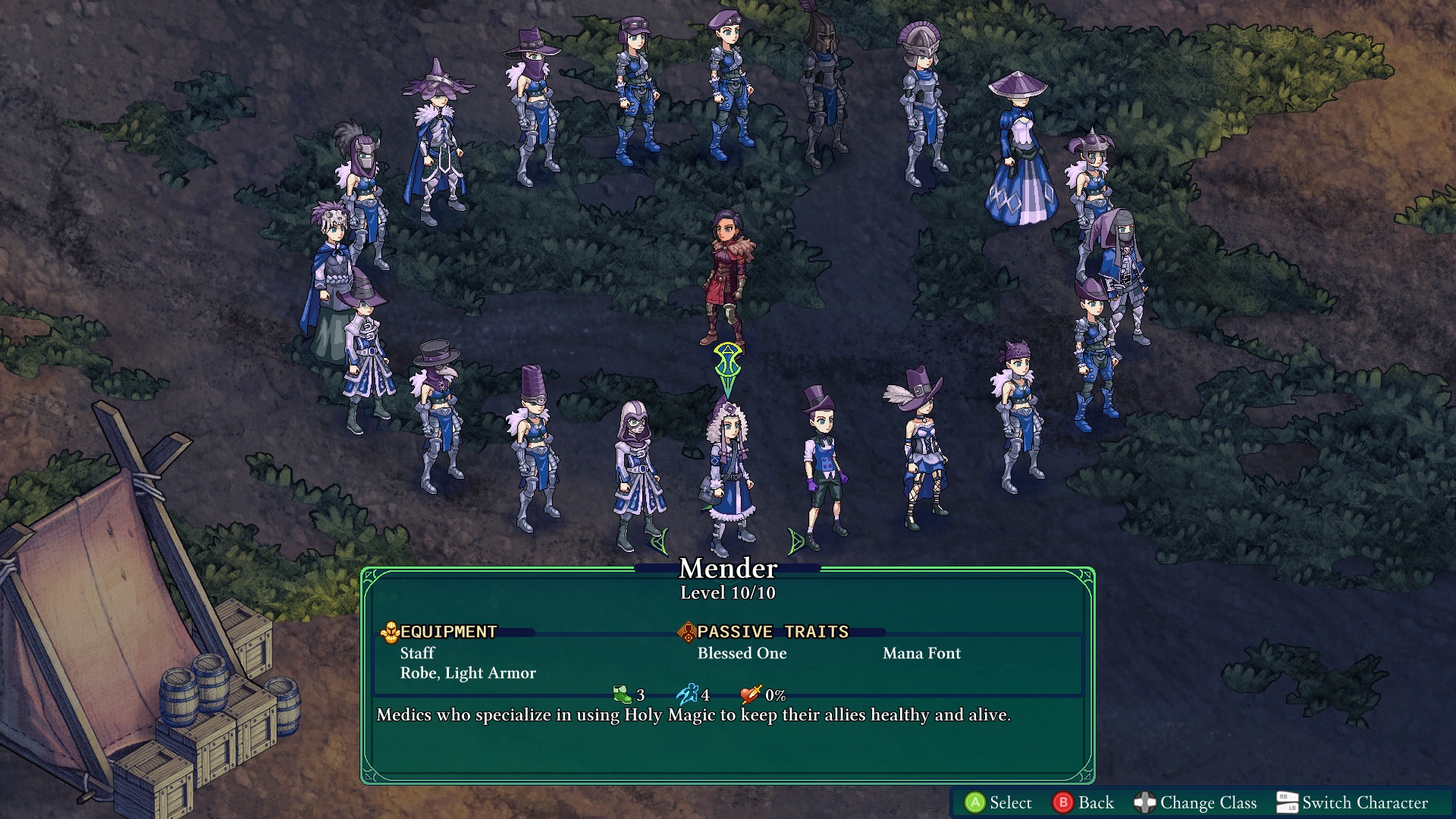 The best feature of Fell Seal is its class and ability framework. The game features over 20 regular and secret classes, each of which supports a list of special abilities that cover skills, passives, and counters. As you learn more abilities you'll unlock access to new classes, which, once assigned as a sub-class, will further texture each hero. In combat, a character enjoys all the abilities unique to its selected class and sub-class, creating scoundrel-menders who can back stab and heal, and wizard-alchemystics who can deal fire damage and cast buffs that raise defense and resistance. By experimenting with different counters, passives, and skills, you can create super-powerful combinations.

If there's a downside to all the ability and class customization options, it's that you can get lost in the details. As you march deeper into the game, collect more heroes, open up access to additional shops, earn more experience points, and access secret classes, you'll need to stop frequently to respec and rearm your characters. It's not uncommon to spend as much time in the customization screen as you do on the battlefield.

Graphically, Fell Seal is a strange game. All of its art styles are attractive in their own way but they never seem to fit together. Map backgrounds arrive in a hand-drawn storybook style, which contrast with doll-like, anime-inspired character models, which in turn contrast with realistic, westernized character portraits. It's as if each component was outsourced to a different artist.

While performance is steady, animations are weirdly wooden and choppy. Kyrie and her platoon often look like marionettes. Moreover, in handheld mode, character sprites have a pixelated appearance that doesn't show up in docked mode. Finally, the game's isometric camera, a staple of the genre, causes consternation as it's sometimes difficult to pinpoint elevation differentials or determine character movement in areas with dense vegetation. At times, thanks to the fixed camera, units are obscured entirely. The option to rotate or zoom out the camera would be a great help.

Fell Seal: Arbiter's Mark is a rock-solid successor to games like Final Fantasy Tactics and Tactics Ogre. It channels the spirit of classic turn-based tactical titles and adds a few ingredients all its own. Its vanilla story, graphical dissonance, and rigid camera angle are minor faults in a deep, versatile package that should keep players busy for weeks, if not months. That two people (with support from a group of contracted artists) made this adventure bodes well for the indie game market.

This review is based on a digital copy of Fell Seal: Arbiter's Mark for the NS, provided by the publisher.