Creature in the Well (NS)

Creature in the Well (NS)

Ever since I was a young bot, I've played the silver ball.

"It's what we don’t see which is truly frightening." So said director Steven Spielberg in reference to filming long stretches of Jaws without the malfunctioning mechanical shark. This truth of human nature—that our imaginations can conjure horrors more formidable than any onscreen creation—translates effectively to Creature in the Well, a pinball-inspired action-adventure game haunted by a monster that never shows its face. Designed by Adam Volker and Bohdon Sayre of Flight School, this genre-twisting title succeeds not only as an experiment in suspense and mystery but also as a hack-and-slash dungeon crawler.

Set in the midst of a giant, never-ending sandstorm, Creature in the Well follows an ancient BOT-C unit, recently awakened from a decades-long deactivation. The last in a long line of robotic engineers, the BOT-C unit crosses the desert—in a sequence that brings to mind Journey—and finds the entrance to a hulking mountain. Inside sit the remains of a massive building project, derelict and offline, and, bathed in darkness, the glowing eyes and skeletal arms of the titular creature, a Smaug-esque monster that has claimed the mountain and the machine inside as its own. 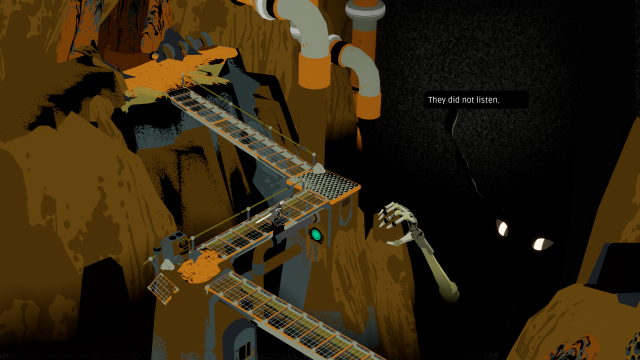 Creature in the Well does a lot of things right, but its storytelling chops are especially good. Much of the game's narrative is, like the creature, intentionally left blank. As you adventure through the mountain and in the nearby town of Mirage, you'll pick up visual clues—the deactivated body of a BOT-C engineer, a makeshift playing field—and access written logs that speak to the painful history of the area before your fateful arrival. There are a few NPCs, including the creature itself, who reveal some hidden truths directly, but for the most part players fill in the blanks themselves, through exploration or via their own imaginations.

Ultimately, though, story is ancillary to the game's unique hook: hack-and-slash pinball action. As the BOT-C unit travels deeper into the mountain in order to reactivate the dormant machine, it will encounter dozens of chambers laid out according to the blueprint of a pinball machine. That means bumpers, switches, and lots and lots of balls. Using two weapon types—a charge type that collects and stores balls (or energy orbs) and a strike type that launches them at targets—the unlikely robotic hero of Creature in the Well will accumulate energy that opens doors and unlocks access to new areas.

Pinball rooms take many shapes and sizes, and almost never linger too long on a particular gimmick or layout. There are, on average, ten in each of the game's eight themed dungeons. Many of the early rooms focus on geometry-based puzzles where players must propel orbs at the correct angle. These are fine for setting the rules and mechanics of Creature in the Well, but are largely inferior to the frantic, reflex-based hack-and-slash action that dominates later dungeons. In these latter scenarios it's less about lining up your shot and more about dashing out of the way of deadly force fields and projectiles, and launching orbs at targets under duress. Here the game earns its "pinbrawler" moniker.

Adding a layer of strategy to the pinbrawling action is a large, diverse collection of charge and strike tools. Flight School has done a wonderful job in giving each weapon a unique physical and mechanical identity. You can equip Dual Blades, which show the trajectory of an orb's flight path (think of a red dot sight), or try your luck with the Folded Edge Axe, which cleaves each orb into additional balls of energy. With 16 weapons in total, there are many opportunities for experimentation and customization. 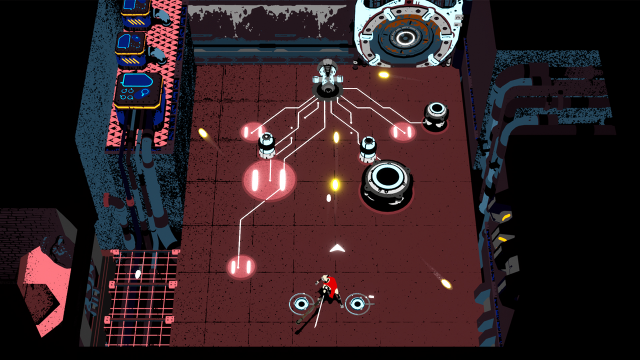 Most of these powerful tools are found in secret rooms in dungeons or in Mirage. Overall, Creature in the Well strikes a nice balance between high-stakes pinball action and dungeon-diving exploration, rewarding the player both for surviving an onslaught and for venturing off the beaten path. In addition to tools, the BOT-C engineer will locate cosmetic capes and Bounded Orb Transfer Cores, which it can parlay into powerful upgrades at the shop in the town of Mirage.

Mirage, which sits sad and alone in the shadow of the mountain, is a nice distraction from the main campaign, but with additional NPCs, shops, and secrets, it could be even greater. Creature in the Well would benefit from more content in general—more branching paths, more hidden chambers, more optional objectives. The game is great fun while it lasts, but it doesn't last long enough. An enterprising player could beat the campaign at 100% in roughly five hours.

In addition to more content, the game could use some remixed content. Although each dungeon is thematically and aesthetically different from the next, they all tend to follow the same flow, host the same types of hidden rooms, and culminate with the creature reaching out of the darkness to pull you into the abyss. It's spooky and surprising the first time the beast drags you several stories downward; it's old hat by the third or fourth time. 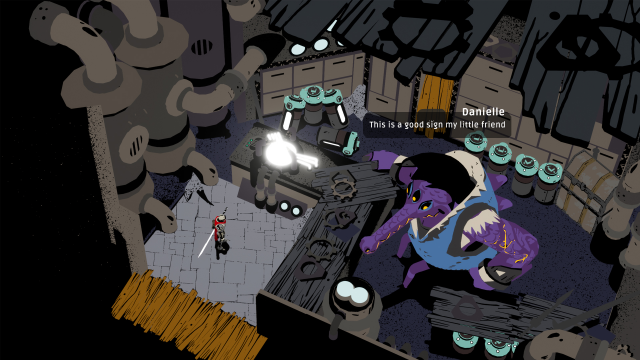 No matter the routine, Creature in the Well looks great. Its sharp, bold lines, striking color palettes, and low polygon graphics grant it a graphic novel exterior. Mike Mignola of Hellboy fame would be proud. On the musical front, the game offers some muted, moody tunes that suit the apocalyptic surroundings perfectly.

The monster in Creature in the Well might be unknowable, but the game itself is a clear winner, even if it's unfortunately short and falls into a predictable routine. Its oblique storytelling combines with comic book art, atmospheric music, engaging "pinbrawler" mechanics, and rewarding dungeon crawling gameplay to create one of the more memorable indie games of 2019.

This review is based on a digital copy of Creature in the Well for the NS, provided by the publisher.