Headspun follows the tale of Theo, the victim of a car incident that left him trapped in a coma for five weeks. Players take control of Ted, who is part of Theo’s brain. He runs the brain like a company, driving Theo to make choices and help him navigate through life. Ted works as a kind of “suit” - he's the rational and intelligent aspect of Theo's personality - while his NPC counterpart, Teddy, is more of a fun loving kind of guy and forms the subconscious part of Theo's brain.

Theo’s life plays out in the game via FMV sequences, with Ted and Teddy looking on, making the decisions that determine how Theo reacts to various situations. This unfortunately is where Headspun’s first problems begin to emerge. 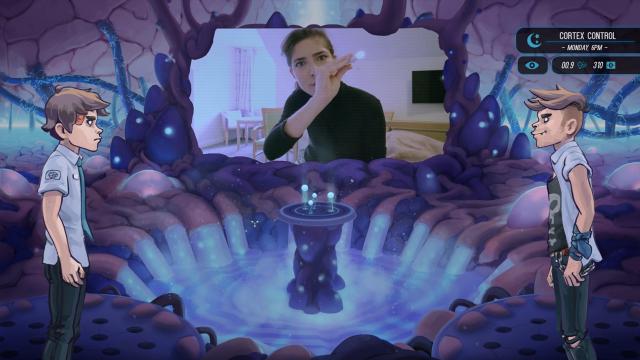 One of the key narrative themes in the game is questioning what's really important. In Theo's working life, for example, he has a good job with a £70,000+ salary, but his heart really lies with his pet project - a comic company. Alas the player is actually powerless to push Theo in either direction. Developer Superstring is a small indie company, so it's understandable that there needed to be limitations on player choice and the impact those decisions would have on the narrative, lest the amount of dialogue required ballooned out of control for such a small company. But there is literally zero ability for players to give meaningful direction to Theo here, and to make matters worse the game almost attempts to give the illusion that you can. 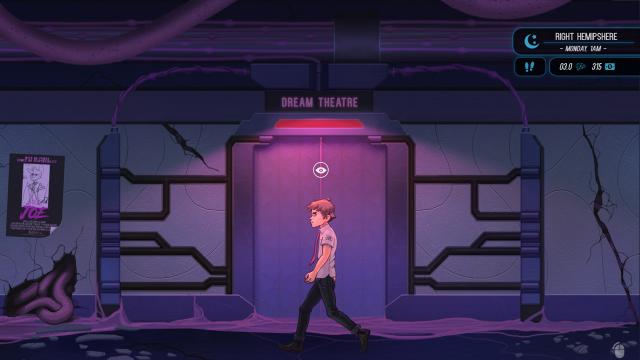 As you play, Theo must perform menial tasks to help recover from his coma; things like playing sudoku, reading, and taking part in simple exercises. These tasks are presented in the form of mini-games, some of which involve clicking on the same spot, while others mean answering maths or English questions (which quickly repeat after a while). Completing these activities grants you credits which can be used to improve areas of the brain, such as the Imaginarium, but these areas serve no real purpose beyond popping up during the story as a meeting place for NPCs.

Earning credits not only allows you to improve areas of the brain, but also hire staff, although they too actually don’t do much. You can ask them to clean up a room, for example, but once they’ve done that once they essentially become useless, meaning that the managerial aspect of the game is left feeling fairly hollow. The game doesn’t even allow you to assign multiple employees to the same role, so you can’t renovate or improve an area more quickly, for example. 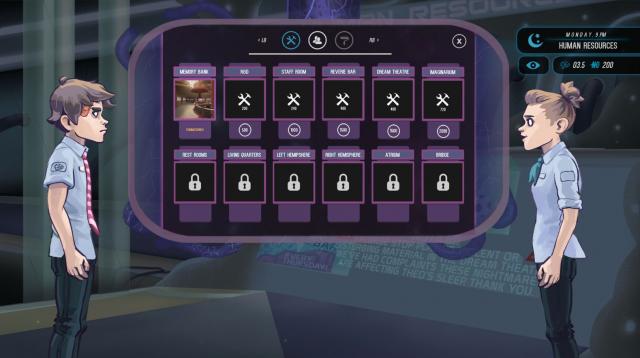 To make matters worse the game is absolutely riddled with bugs and technical flaws, from mysteriously teleporting across the map when entering a room, to getting stuck in place and having to re-load the game, to even minor issues like typos and the subtitles not working. Perhaps the most notable issue from a gameplay perspective was that, oftentimes, the in-game time wouldn’t pass when earning credits. As a result I was able to buy every upgrade in the game after the first day, which meant that to progress in the story all I had to do was hit wait over and over. 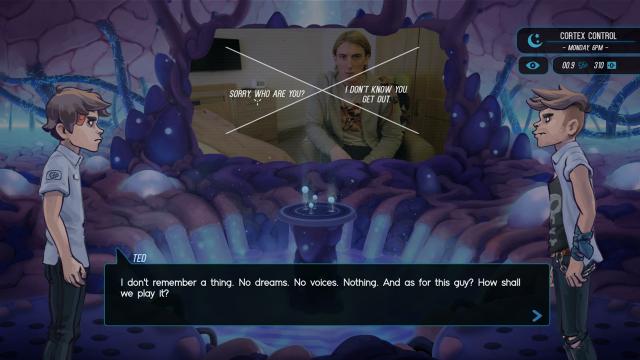 And yet, all of these issues could be overlooked, or at least would fade into insignificance, if the dialogue and story were top notch. They aren't, though -  the narrative drags at such a pace that when a particularly key plot point took place I honestly struggled to care. The final moments also leave a bitter taste, because it becomes clear that all of the activities you've performed and decisions you've made are inconsequential, despite their being the central pillar of the game.

Headspun, on the surface, is an interesting and potentially great idea. The push and pull power struggle between emotions and reason a la Inside Out; the existential wondering about what's important in life; the blending of FMV with modern gaming systems - these are interesting concepts that could be explored by the gaming medium. But the lack of depth in narrative, gameplay, and character development means that Headspun isn't the one to do it, at least not successfully.

This review is based on a digital copy of Headspun for the , provided by the publisher.