Whipseey and the Lost Atlas (NS)

Whipseey and the Lost Atlas (NS)

The old adage says never judge a book by its cover, but sometimes you can’t help but do just that. I fear this may be a fate that falls upon Whipseey and the Lost Atlas, as a split second gaze upon any screenshots will likely see immediate comparisons drawn with Nintendo’s portly pink puff Kirby. Video footage may not help matters either, as it proudly wears influences from the likes of Super Mario Bros. and Castlevania on its sleeves. This, in combination with the low price point, may see the game written off as a second rate imitation, but every piece of art deserves a fair shake of the stick. 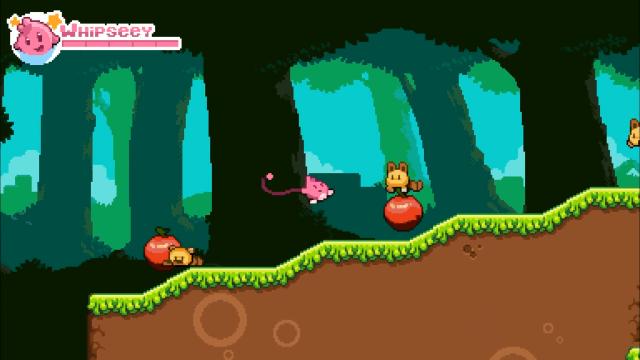 Whipseey is centred around a boy named Alex who has somehow landed himself in a spot of bother, waking to find himself transformed into the titular character that we guide through the five levels on offer. I only know this from reading around promotional materials of course, as there is no explanation to the plot points aside from a few still images displayed once proceedings get under way. I can’t imagine anyone is going to get caught up in the storyline here, but the way it has been integrated seems so half baked I have to wonder why it was included at all.

The lack of narrative does allow us to dive right into things, however (a plus for some I’m sure), and you’ll be up to speed with the mechanics of Whipseey in next to no time. A two button control scheme is used, with B allowing our hero to jump and Y unleashing a Belmont-esque whip attack that also doubles as a tool to swing over large gaps. Holding B in mid air will see Whipseey utilise the whip as a carousel of sorts, slowing his descent and enabling him to cover longer distances. It’s a limited moveset, but given the brief nature of the game itself, it’s just about enough to cover the short lifespan without leaving you yearning for more abilities or power ups.

Whipseey himself can be a little slow, and whilst he never feels sluggish, a dash to help speed him up wouldn’t have gone amiss. The way he handles is also a minor point of derision, as although the controls are responsive, his movement is not quite as tight as I’d like, making some of the platforming sections a little trickier than they should be. 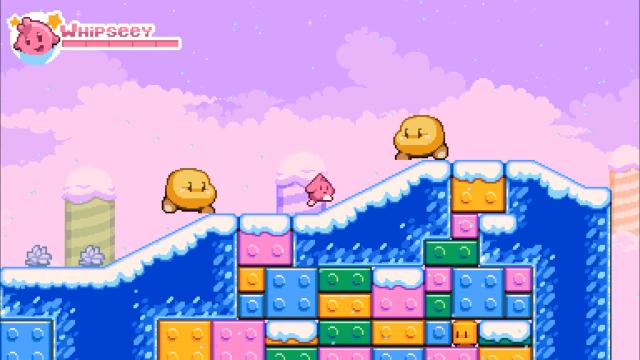 Whipseey goes for the retro vibe that has been in vogue for some time now, with a look that seems to fall somewhere between 8 and 16 bit. Environments are bright and vibrant, with sufficient details to give each level a distinctive feel, even if the backdrops can be sparse on occasion. The music adds to the whimsical nature with a light and airy vibe, although none of the compositions are particularly memorable, so don’t expect to be humming any tunes once you stop playing. The levels are based on predictable locales, as you traverse through beaches, forests, and deserts on the way to the castle finale, the latter of which is derivative of Super Mario to a point beyond homage.

The lack of imagination stretches beyond the visual department. Every stage is a completely linear experience that offers no chance to explore and no incentive to revisit levels you’ve beaten. However, within these levels there are some well crafted areas that can get fairly tricky, with some thought, patience and nimble fingerwork required to progress.

Enemy design is quite diverse, although in the end it’s merely superficial as defeating most of them merely requires you to wait for the right time to unleash your mighty whip. Fallen enemies drop gems that can be gathered to help you accumulate extra lives. The smaller, more common red gems carry a value of one, whereas the bigger blue build is worth five; collecting one hundred bumps your life count up a notch. A boss must be beaten at the end of each stage, but I can’t say they present much of a challenge, as once you learn their limited attack patterns it’s simply a case of picking away at their health until they’re done for. 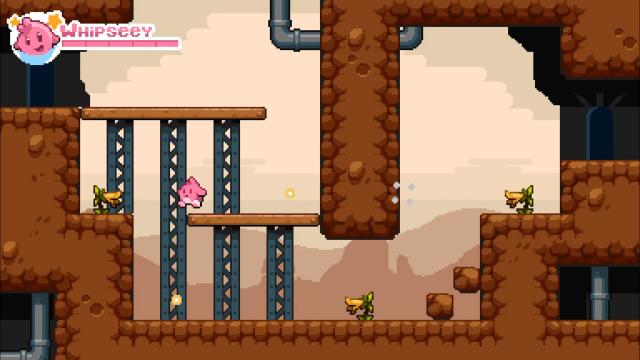 I’m not sure where I stand on Whipseey and the Lost Atlas. It has plenty of charm and plays well enough, but it's a very bare bones affair that is over before really having a chance to shine. This may very well have something to do with budget constraints, and whilst I feel I have to take that into consideration, I also have to take the wider market into context too. I'm not sure I can recommend a purchase, even with a somewhat generous RRP, as it’s a brisk, one and done experience that doesn’t have much to entice players back for another go. I breezed through the campaign with few problems and it’d be generous to say you'd get two hours of playtime, even at a leisurely pace. I do think this could be a building block for something better, as the makings of a good game are scattered throughout Whipseey, but it really needs to be fleshed out and polished to appeal to anyone other than the most ardent fans of the genre.

This review is based on a digital copy of Whipseey and the Lost Atlas for the NS, provided by the publisher.