Portentous storytelling aside, this is one puzzle-platformer we hope doesn't fade into the ether.

A crowdfunded game can be a dice roll, especially for hyped backers.  There are dozens of mismanaged examples highlighting how often the original vision doesn’t match up with reality.  Even tenured developers with new, aspirational studios can fumble enough to spoil decades of accrued goodwill.  On the flip side, there are examples like Altered Matter: a dev team of young artists located in Barcelona looking to craft a humble 3D puzzle-platformer.  What they lack in storied history they made up for in gravity-bending concept.  A successful funding campaign later and, despite stacked odds, Etherborn’s core gameplay sticks the landing and had me thinking about it long after completion.

Guided by an ethereal, omnipresent voice you play a unique female avatar.  Think human diagram found in biology textbooks made flesh: a walking 3D model with transparent skin and vital components such as the brain, lungs, heart, and critical arteries visible underneath.  The mysterious, omniscient narrator’s only form is like a floating spinograph: a collection of squares perpetually rotating around and through each other in an elegant dance.  She also has a knack for making metaphysical musings about existence.  She beckons you to find her and discover answers along the way. 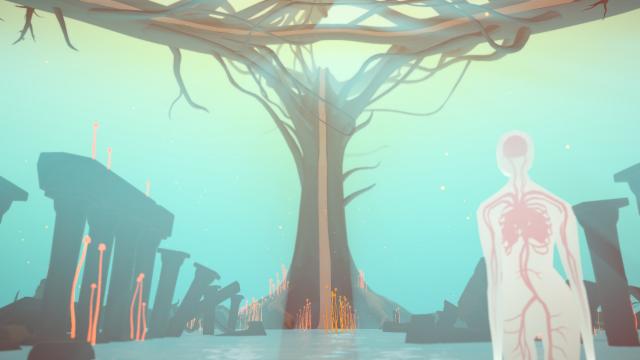 “Can you…hear me…?  Doubt.  Destroy.  Contemplate.  Fall Silent.  Build.  Listen, at last, to what has always existed and was never there, and seek until your last breath the impossible pathway.  Look for me… I’ll show you how… I’ll show you why…”

The best indicator to know whether you’ll care for the slim story is your gut reaction to this opening monologue.  Yes, it’s another one of those indie titles.  Beneath its pretentious twaddle there are glimmers of revelatory ideas about human nature or… something like that; most often, it’s self-important posturing.  Her speeches harken back to The Speaker from Destiny.  Swap the sex, replace a lifeless Bill Nighy with an otherwise-acceptable performance by Natalie Winter, keep the smug circumlocution, and voila!  More of the industry’s finest world-salad writing for you to partake.

Aside from including one of those indie game endings, these embellishments don’t stick around too long.  It’s a puzzle game first and foremost.  The visuals, sound, and puzzle design spend players’ mental energy in a more gratifying way than grandiloquent lines ever could.  On this front, I couldn’t be happier with the result besides wanting more. 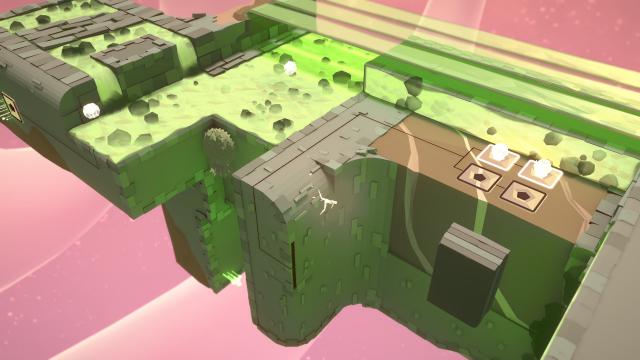 Etherborn’s conceit is deceptively simple.  Think of standing on a floating cube and each side having its own gravitational pull unique from the rest.  The top of the cube is the 3D platformer baseline: gravity pulling downwards.  Now consider standing on the backside of that cube and plummeting towards the front.  Leaping over flat edges nets this result while concave or convex slopes transfer gravity’s pull and reveal more of the level.  The layout constantly shifts perspective to staggering degrees.  The goal is to acquire crystalline orbs which act as keys to unlock bridges or new areas.

It should go without saying how much I enjoy these puzzles.  They’re the type which test spatial reasoning to the point of needing intermittent breaks.  I was downright shocked with how quickly Altered Matter wanted to wreck your brain too.  What the hell, guys?  A tutorial for basic movement, what orbs do, and a short primer later, then the next puzzle sets much higher expectations.  And I admire that attitude.  There’s no compromising hint system nor objective markers either.  A fair warning to less-experienced players, but this heuristic approach contributes as to why it’s stuck in my head post-completion.

This doesn’t mean puzzles are diabolical either.  The minimalist art style does a good job of emphasizing function over form.  Color patterns for various hazards and multi-sided platforms are clearly communicated.  And there are some clever visual cues in both the deliberate framing and color contrasts that make it impossible to blame the level design for something you may have missed.  There’s even something less… brutal about mistakes in these MC Escher-esque landscapes thanks to its breezier atmosphere. 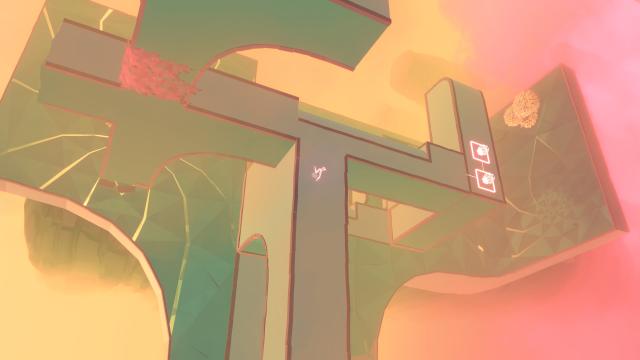 Sadly, the mechanics leave something to be desired.  Despite switching the default movement to run—because I couldn’t stand walking—the avatar still feels a bit slow and sluggish.  Some unsuccessful jumps felt like the game’s fault.  At least the game’s hidden checkpoint system is generous.  Camera frustrations were infrequent but not to a negligible extent.  Since it’s a fixed perspective with limited movement options, fights with blind corners were the go-to in communicating this was the wrong way.

An oft-repeated complaint is contingent upon that fixed perspective.  And while those moments of stumbling into tough camera spots were bothersome, I don’t think players seizing control is the solution.  The game’s exploratory nature relies upon withholding information until players physically inhabit each location, mentally map out its features, and execute a plan.  You lose something by replicating the gravity-platforming model of Super Mario Galaxy here.

Aside from straightforward puzzle-platforming, there was another cool feature: The Endless Tree.  Minor as it may seem, I love seeing games incorporate hub worlds which integrate the game’s broader ideas with its mechanics.  Narratively, it’s the one successful visual metaphor that connects Etherborn’s pontificating about human nature and our shared history; mechanically, it’s fun to go along this crude, linear path while witnessing gravity shift around you.

Overall, Etherborn has the formula down for pushing players without pummeling them.  Mechanical flaws can bother but are dampened by fair checkpoints.  The puzzles are a joy to solve and reward you for careful consideration rather than brute force. 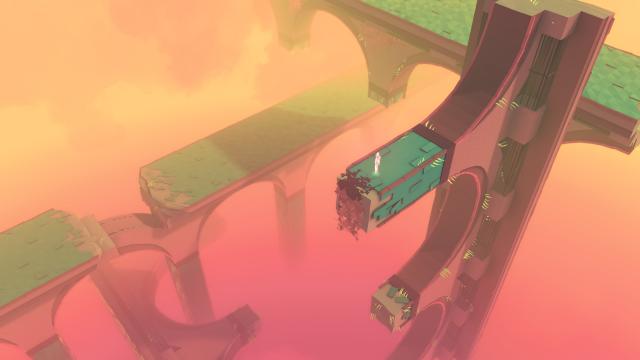 Visuals come at a crossroads in respect to keeping a modest design.  Again, I want to highlight how emphasizing function first is understandable for this concept; that said, there was opportunity to heighten personality more between certain stages.  That doesn’t mean it looks dull.  The odd captivation with triangles, from tile works to bushes, and the strange mist engulfing these worlds fits perfectly.  The later transition to darker color schemes and alien sculptures deserves props for its visual pacing too.

Regarding technical quality, I didn’t experience any visual hiccups or performance issues.  It’s important to note my experience is from playing on an Xbox One X.  I don’t recall the game getting any post-launch updates (as of yet), suggesting it released without an exorbitant amount of bugs or glitches.

The soundscape compliments these visuals.  Even when beating myself up during tougher puzzles, the gentle strings and piano keys did alleviate some frustration.  The aural queue when dying is a suitable juxtaposition to the calmer moments too.  There’s not much else to assess in respect of sound design, as it keeps to the minimalist intent, but from the sounds of footsteps to gargantuan pieces of the map slamming into place it sounds satisfactory and reinforces your diminutive stature in these grand environments. 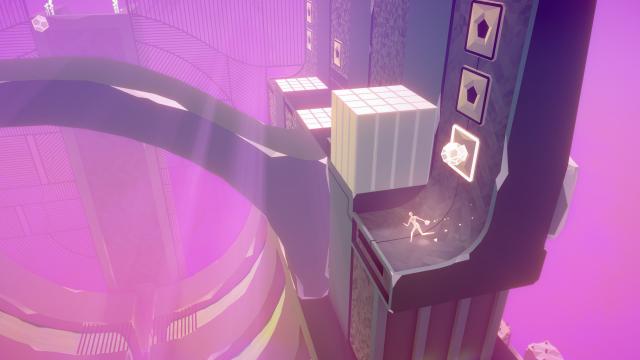 The value of an indie game priced at a high $16.99 is something that comes into question.  I’ll admit: the campaign is short.  There aren’t any collectibles, but there is New Game + mode.  Granted, the levels are regurgitated but orbs are scattered in different places.  Some are just inside bushes and the more inspired switches reveal paths previously undiscovered by me.  Despite acknowledging the package as basic, my renewed admiration for these puzzles overshadows the negative.

The two clearest adjectives to describe Etherborn would be ethereal and ephemeral.  Altered Matter’s confection of abstract art, sound, and puzzle design balances increased difficulty with an unspoken delicacy.  I may be recreating the same intangible waffle I’ve criticized this story over, but it makes sense when zoning out and overcoming the next brainteaser.  And though it does stick to those gravity-intensive basics, added environmental twists aside, they work well within their fleeting time.  Sifting through and only employing your best ideas is something the industry could use more of now and then.