Lorning for a more interesting game.

Real time strategy (RTS) games have long been at home nearly exclusively on PCs. From time to time they make appearances on home consoles, but with very few exceptions do they ever seem to make a positive impact on players. Lornsword caught my eye as a title that may be part of that elusive group of great console RTS games. It has the basics one would expect from the genre, but its sole focus is on being a story-driven single player (or local co-op play) game, so it seemed like Lornsword had a chance at being greater than most strategy games on consoles. 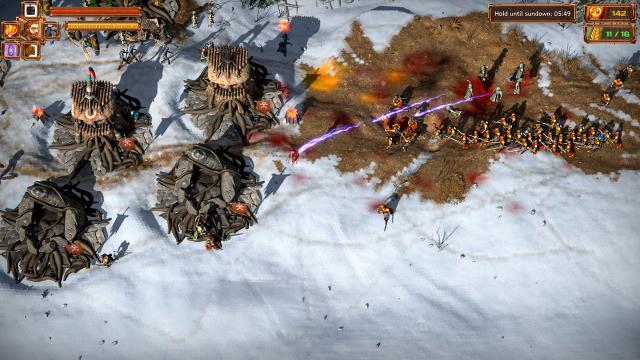 Lornsword starts off slow… painfully slow. The early stages take their time to ease you into the controls, mechanics, and story of the game. Over the first several levels the skills, game mechanics, and structures available to you trickle out at a sluggish pace. It was getting to the point where I was having a hard time paying attention to, and enjoying, what seemed like a far too simplified take on an RTS. Thankfully Lornsword eventually hits its stride and becomes much more complex and interesting.

The fundamentals of the genre are there, with resources to acquire and spend in order to expand your army’s offensive and defensive capabilities, while opposing forces compete for those very same resources. You play as Corun Lan Ka and occasionally Eshe, who act as generals throughout the game. As generals they're entrusted to lead meagre forces to victory in a small assortment of mission types, such as defeating enemy camps or fending off a constant onslaught of warriors for a set amount of time.

The story has a small-scale Game of Thrones vibe to it, with a strong battle-ready people clashing against a more primitive adversary while also figuring out how to deal with a third more threatening force. Unfortunately, I found the narrative altogether uninteresting and eventually I wanted to skip past narrative segments in order to get back to the gameplay. The voice acting is fairly stiff for the most part, which doesn’t help sell the attempted messages buried in the story about philosophy, loyalty, and family. 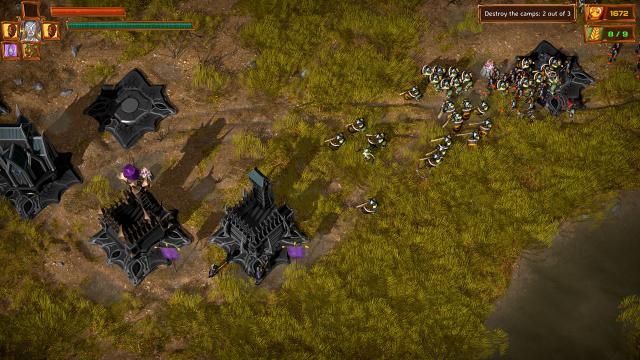 After the slow beginning the gameplay of Lornsword eventually really grew on me. The maps are just the right size to zip around, using a small amount of magic to travel quickly to get your bearings, after which you can use a bit more magic to teleport back to home base and start applying your plan of attack. It becomes very important to manage your magic - even more so than your health - as it's used to summon supernatural allies, travel at faster speeds, and return to base in a flash. Sadly, mission variety is meagre.

With such a small assortment of missions the dreadful ones stand out. The 'hold the base for x amount of time' ones are in the dreadful group. They last for 20-30 minutes and consist of stretched out periods waiting for things to happen, until suddenly too much happens and you have to restart with the new-found knowledge of how, and more importantly when, to deal with attacks. This means that a fairly simple and tedious mission is often played at least twice before success is achieved. The simple 'defeat the enemy camp missions' are quite enjoyable, but in nearly all of these stages the victory goal is obtained far before you have the chance to fully upgrade your troops or summons, forcing me to scratch my head as to why they exist when they never seem to be necessary or even achievable within the time constraints. 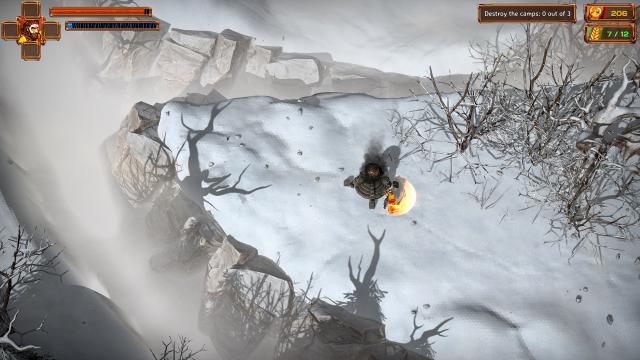 Lornsword was regretfully not the console RTS I had envisioned when I first saw the trailer. It does a fine job of stripping the genre down to its essentials and working notably well with a controller, but outside of that it exists in a bland world where a third of the missions feel like a chore rather than an interesting challenge to overcome. The embryo of a solid console RTS game is there, but it needed more refining for it to stand out and become something truly special.

This review is based on a digital copy of Lornsword Winter Chronicle for the PS4, provided by the publisher.