An "exceptional" action game full of twists and turns.

When a game promises to tickle your nostalgia for classic franchises such as Tron and Strider it's incredibly easy to come into it with a cynical mind. Are they just banking on the names, looks, or styles of others to sell their product? Are they going to do those properties justice? Will this game have its own identity? Exception successfully walks that fine line of borrowing ideas yet constructing its very own personality. It takes the single screen action platforming genre popularized by games like N+ and Super Meat Boy and introduces a much welcome coat of sci-fi paint to it that radiates off the screen. The influence of properties like Tron and Blade Runner is undeniable in the aesthetic design of the game as well as the narrative. 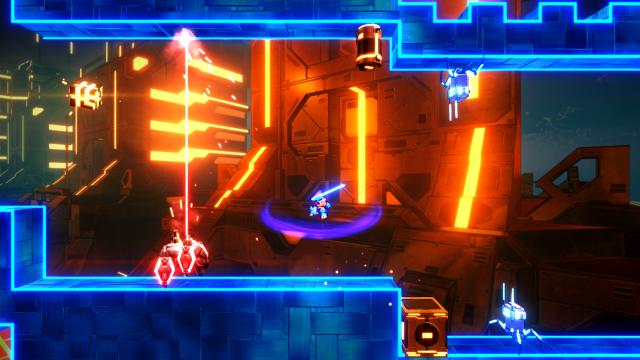 The strongest feature that Exception brings with it is that no level is static in its design. Each of the adeptly built 128 stages is cleverly designed to invert, rotate, or otherwise transform as you progress, opening new areas and unveiling a variety of paths available. These dynamic levels are lively and animated while traversing them and working your way towards the stage's Control Node, which is the end point. Even late into the game new ideas and imagery are continuously being introduced.

The standard left to right advancement is soon forgotten, as you'll be running, jumping, sliding, and slashing in every direction because each stage twists and distorts as you interact with it. Often you can even find ways to skip whole areas of a level if you look for ways to bypass its level triggers, scale walls, or use objects to your advantage when a level is oriented in a specific direction. 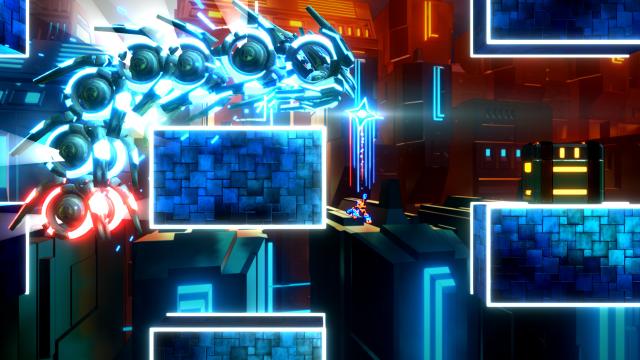 Time is also a driving factor as you’ll be ranked between 1-4 stars depending on how quickly you can reach the Control Node. Stages are often completable within just a minute or two, with the 4 star times being set between 15-35 seconds for the most part (though there are several exceptions). Stars are directly tied to how quickly you earn each of the game's 6 special moves. After you've earned each of these moves, however, there is little incentive to keep improving your times and achieve those 4 stars per level. If you have a competitive nature you may find some motivation in competing against others via the barebones leaderboard, but outside of that those times won't earn you anything for your accomplishment.

Also included in each stage are hidden Bytes, which are used to upgrade special moves. A couple of these moves however I found to be ineffective and ignored throughout the game. With that said, the game's progression ties story, levels, upgrades, and unlockable moves together in a gratifying way. 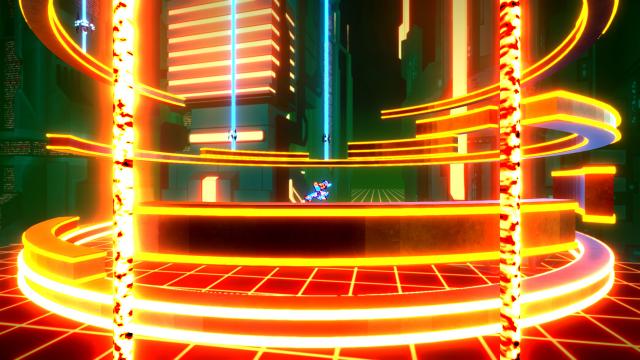 A title full of outstanding levels wouldn't be very enjoyable if the movement through them wasn't up to par. Fortunately the controls are as tight as the games that inspired it, like the previously mentioned Strider or perhaps Ninja Gaiden for the NES. Running, jumping, and wall-jumping are all crisp and responsive. The range of your sword is just long enough to safely hack away at incoming enemies and projectiles, but also just short enough that you'll need to get up close and personal with many of your targets. Once upgraded you'll have the ability to throw your sword in the 4 cardinal directions, both while in the air and on the ground. I found this extra range to be crucial in certain circumstances when fighting stronger enemies or clearing out pesky Threads which are just out of reach.

The down and upward-dash upgrades are much more situational, but when you need them they deliver. The combination of strong level design and precision controls leads to a game that pushes you to excel in your execution, but never to the point of frustration. In fact Exception has toned down the brutal difficulty of comparable games to a level more suitable to the average player. 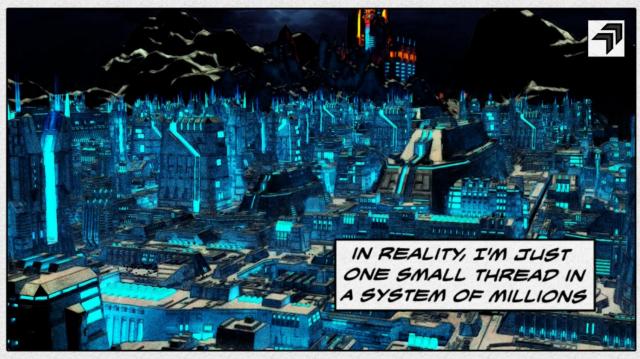 The story is a slow burn, starting off on the purposefully silly side, before slowly unveiling the origins of your character as well as his motivations, and finally ending with a climactic showdown. The adventure takes place inside a clearly untechnological Grandmother’s laptop in a digital world in which Threads are the inhabitants. An event at the start of the game transforms the Threads' typical way of life into something considerably more rigid and orderly than they have been accustomed, and the Control Nodes you disrupt are a key part of this new order. The story is told in stunningly displayed comic book style panels that succeed wonderfully in painting a picture of life inside a computer world. While the narrative starts and ends on high notes, it does tend to drag a bit in the middle and may have been padded slightly to fit the vast amount of available levels.

The incredible atmosphere of Exception wouldn’t be complete without a notable soundtrack to accompany the rest of the package. Included are euphonious retro-cyberpunk Synthwave tracks that couldn’t be better suited to the rest of the package. Songs don’t begin and end with each stage like in a traditional game, but play out in their entirety over the course of many attempts or stages depending on your skill level.

Unfortunately a few minor bugs and crashes occasionally killed my momentum and the game had to be restarted. Thankfully, constant auto-saves and incredibly short levels meant I was right back where I left off in no time at all, slashing opposing Threads into oblivion and wall-jumping my way to the next hidden Byte, but sans a patch that fixes these issues they're something to be aware of before purchasing. 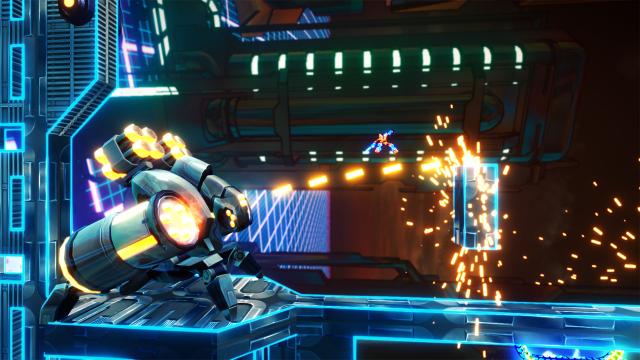 Exception is an easy recommendation for anyone who loves a good action game, who is easily taken in by vibrant colors and worlds, or who appreciates interesting level design. It's not as challenging as the counterparts that inspired it, but that’s also part of the appeal; it hits that sweet spot of pushing you just enough to keep you playing, but not so much that the controller gets put down.

Played on the Nintendo Switch in both docked and handheld mode to 100% completion, with both the Pro Controller and standard Joy Cons.

This review is based on a digital copy of Exception for the NS, provided by the publisher.