Whether fair or not, the latest game from a developer is going to be prejudged based on the company's previous titles. When you're known for hilarious games like Broforce and Genital Jousting, certain expectations are already established. Developer Free Lives proudly meets - and even exceeds - many of these expectations wholeheartedly with GORN, a VR gladiator combat simulator that is ultra violent, absurdly disgusting, and undeniably fun, making it Free Lives' best game yet and easily one of VR's best offerings when it comes to pure fun, even if it does lack some depth. 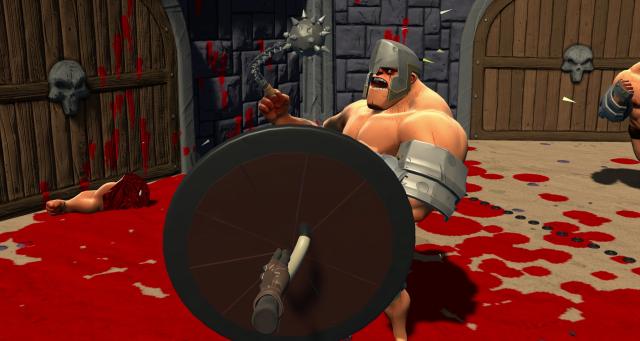 There isn't much of a story in GORN, nor is it necessary. You're a gladiator who fights in an arena at the behest of the emperor. Why? Who cares. How did you get there? Doesn't matter. Your only goal is to destroy everything in your way in order to meet ALTIMA, the emperor himself, in combat. Clearly, the story is just a small afterthought to the main attraction of the viciously engrossing gameplay.

Controls take a bit of time to get used to, especially if you have limited experience with VR games. Grasping and swinging weapons is easy and natural enough, but walking is done by physically moving your arm forward and holding the accept button, and then moving your arm back as if you were swaying your arm as you walk. With practice, this becomes second nature, but it is a bit confusing at first. Fortunately, there are a multitude of movement and comfort options for VR that you can change to suit your needs and experience level. 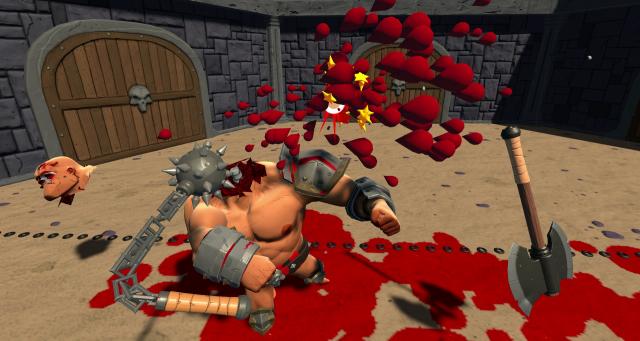 Easily, the main attraction of GORN is the ability to murder your enemies in a multitude of creative ways, using a wide assortment of arms, all in VR. This is an area where Free Lives rises above other developers. Combat is physics based and the enemies and weapons act according to how fast you swing your weapons. Weapons range from one handed swords and maces to two handed axes and poles. You’ll also have access to more creative weapons such as claws that mimic Wolverine’s iconic weapon and a grappling hook that disarms enemies, leaving them vulnerable. What’s more, all of these weapons play differently, with varying strengths and weaknesses. The more you play, the more you unlock for Endless Mode.

With the amount of weapons you have access to, there is almost no limit to the different ways you can maim and dispatch your enemies. You can decapitate enemies with no helmets quite easily, but that’s only the start. If you’re so inclined, you can rip limbs off your enemies and use them to beat your opponent to death. As a result, there aren’t that many games out there, VR or otherwise, that allow you the sort of freedom and fun that GORN does when it comes to combat.

There are three different tiers with three bosses in each that you will have to overcome in total. Before you face a boss, there are waves of absurdly buff enemy gladiators that you have to take out first. Early in the game, enemies will come at you one at a time while the others helplessly watch their comrade get torn apart. Later on, though, they can quickly overwhelm you. Even though it is a lot of fun to kill your enemies, it does become redundant. Their attacks become predictable and easily countered. It doesn’t help that the AI is particularly dumb. Generally, opponents just try to go in a straight line at you and swing whatever weapon they’re carrying. This means that it is a bit too easy to get them to walk into pits or to hit their allies instead. 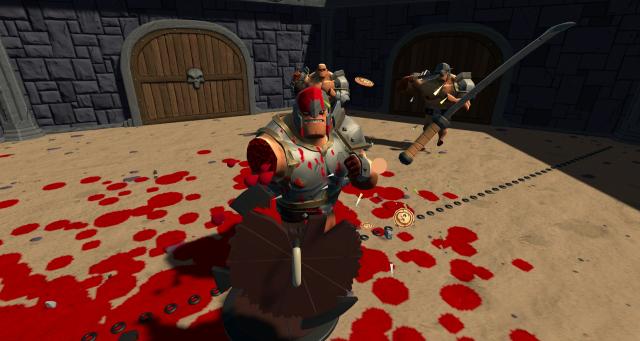 Although the final battle is one of the more memorable boss fights in recent memory for me, most are just not as creative. Some standout, such as a giant crab, but many are little more than variations of common enemies with better armour and specific weaknesses to exploit. An example is Achilles, who is essentially invulnerable everywhere except of course his heel. It’s still fun to beat them, mostly because you can do so in gruesomely satisfying ways, but the challenge isn’t there for the most part.

After beating the game, which takes under two hours, replay value can be very high depending on what you decide to do. You can go back and replay bosses to complete bonus tasks if you like. Attempting to complete certain tasks will also unlock weapons in Endless Mode. Endless Mode challenges you to see how many enemies you can take out before dying. There's also a nifty multiplayer mode that allows up to four players with gamepads to control enemy combatants while the player with the VR headset fights them. The best part, though, is the ability to alter the gameplay with various settings and mutators in Custom Mode. 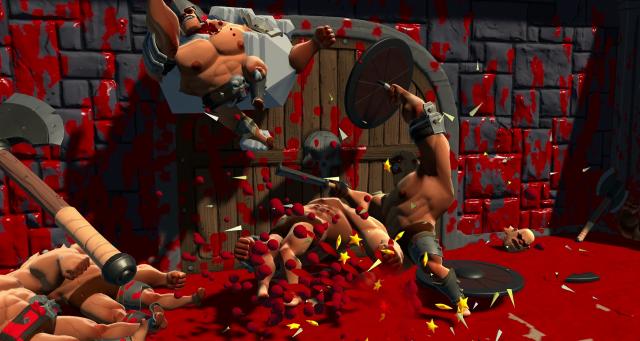 The presentation in GORN is simplistic but effective. Free Lives opted to go for a more exaggerated style rather than a realistic one. The sound effects are simple, work well enough, and give off cartoony sounds when used. The graphics are also cartoony, which is for the best considering all the things you can do to your enemies. Arms, legs, even heads, can be stretched like rubber before ultimately being ripped off. Blood will gush out like water from exploded pipes as a result. If the gore and violence is too much, you can turn your enemies into pinatas that gush out candy instead in the options. GORN won’t be winning any graphic awards, but the cartoony artstyle works really well in the fun world that's been crafted.

GORN is an easy recommendation for those who value fun gameplay and the ability to kill enemies in creative ways above everything else. You likely won't find a melee combat game in VR that offers so many ways to disfigure someone in such a satisfying way. However, if you're looking for a deep and engrossing story, complex systems to master, or are easily offended then Free Lives' gladiatorial simulator isn't for you.