In 2015, the Kickstarter boom was in full swing. Games were seemingly being pitched on a regular basis through the crowdfunding platform, hoping to be the next FTL, Shovel Knight, or Divinity: Original Sin. Among them was Frozen Districts' Warlocks vs Shadows, a side scrolling action RPG hybrid that offered both single and multiplayer action. Even though it was pretty rough overall, it showed some promise. Four years later and Frozen District is set to try again with Warlocks 2: Godslayers, which has made its way to the PC a month after launching on the Nintendo Switch. Warlocks 2 successfully addresses many of its predecessor’s key issues, but a few drawbacks keep it from being a must play title.

There is a lot to like in Warlocks 2’s visuals, especially when compared to the original. Frozen District once again uses pixel art, but there is a clear upgrade here. Indeed, the visuals are akin to those found in a high quality SNES game. Characters, NPCs, and enemies are well detailed with fluid animations that help them stand out. Bosses in particular are noteworthy. Many of them are gargantuan beings that tower above you. However, the real star of the visuals are found in the levels themselves. 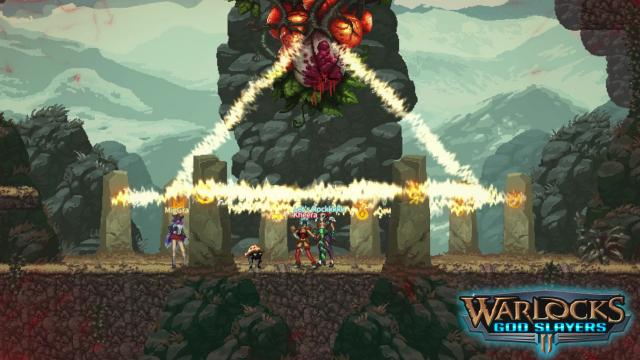 There are three different planets that offer distinct visual styles. One boasts lush forests speckled with snow, another has you fighting in (and under) an apocalyptic wasteland with decrepit buildings, and the last has you exploring empty deserts with ancient ruins. With the visual quality of the levels, it’s unfortunate that there are only three planets to see.

Strong visuals are supported by solid audio design. Sound effects are simplistic but effective, with each character and attack providing unique sounds. More impressive though is the music. Jazzy synth and techno beats are used effectively to engage players and enhance the experience. There is a lot of variety in the music as well. You’ll hear everything from slow-paced somber songs to upbeat cheerful tunes, and a lot more in between. Indeed, each level seemingly provided a new melody to listen to. It is clear that Frozen District put a lot of effort into the presentation of Warlocks 2 and this pays off.

Another area where effort was clearly spent is in the gameplay. The original Warlocks was primarily wave based and as a result quite repetitive. Here, however, there are main quests to complete for each level, along with secondary objectives to complete. This gives you a bit more reason to continue playing through the levels, even though many of the quests are your standard RPG fetch or kill quests. Still, there are some standout quests that add a bit of variety. 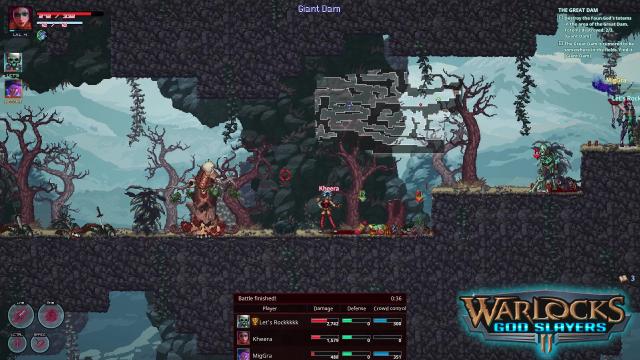 Of course, the quests and levels wouldn't be much fun to complete if the core game systems in place were not enjoyable. In Warlocks 2, these systems are a mixed bag. Combat itself is pretty fun and works quite well on a Dualshock 4, although it does take a bit of time to get used to as it doesn't follow a standard side-scrolling control scheme but rather that of a twin-stick shooter. Once you do adjust and it clicks you can appreciate why it is set up differently and works well for both mouse and keyboard or a controller.

Where combat really shines though is in the variety of characters and skills. There are five different warlocks to choose from, each providing a unique and often fun experience. Shax is a personal highlight as he is a necromancer who summons undead minions to fight alongside him. A very unique character is Cormag, a drunken goat that rides into battle on the back of a dwarf in a hilarious paradox. Kheera is a dagger wielding shaman who is effective at diving in and out of combat and supporting allies. A boombox brandishing Jake is also available, while a millennial witch called Willow uses smartphones and selfie sticks as weapons. All these characters play differently and are a lot of fun to experiment with. 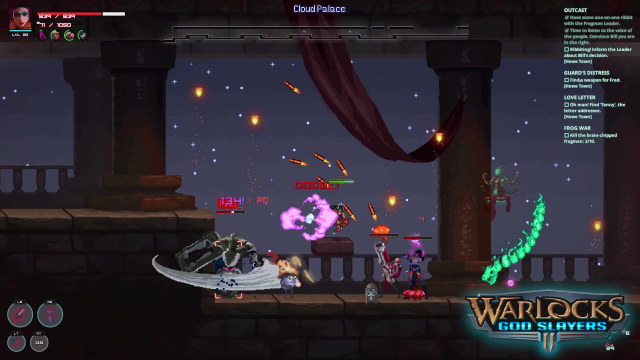 At the start of the game, you choose one of the five characters and have the option of modifying the game to make it more challenging in a variety of ways. For example, you can choose a permadeath option or an option to make drops more scarce. This, along with the different characters, ensures a ton of replayability beyond the 8 to 10 hours it will take to beat the game in a single play through. There’s also a basic Familiar System where you can choose an egg to hatch and a pet will follow you and evolve based on experience it gains.

Playing the game alone is solid but playing it with others increases the fun. You can choose to play both local or online coop with up to three other players and the difficulty scales based on the amount of players.

With or without friends, enemies in Warlocks 2 will provide a pretty hefty challenge, especially in the later stages. There's a lot of enemy variety in the game and each of the three planets will force you to fight different types. For the early part of the game, you can just spam your different attacks and be successful. However, there are some engagements that require a bit of thinking, planning, and quick reflexes in order for you to be successful. Bosses are a real treat as well. Among others, you’ll fight a slumbering plant blocking your path, a giant flying octopus, and a submarine armed with lasers. Here, again, Warlocks 2 is vastly superior to the original, but even more bosses would be welcome as well. 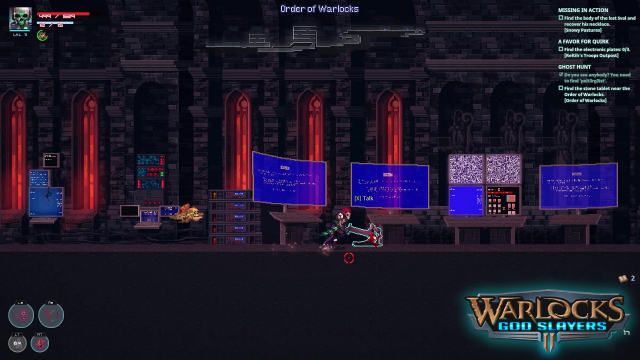 An area that could use a bit more work is the loot system. In a lot of ways it's very reminiscent of the Diablo series. As you play, you’ll collect a lot of loot. Different pieces of equipment and weapons give boosts to stats, but I found most to be garbage to be sold to vendors. There are actually no weapon types, even if you can equip different weapons. And no matter what you equip, be it armor or weapons, all it does is change your stats. As a result, you’ll make quite a bit of money but there's very little worthwhile to spend it on. You can collect sets of armour for extra bonuses, but I found it wasn't worth the hassle. Suffice to say, if you continue to play Warlocks 2 beyond a single playthrough, it won’t be because of the loot.

Another area that leaves a lot to be desired is the story. It’s very basic and forgettable. Basically, the Gods are sending their minions to attack innocents and it’s up to you as part of The Order of Warlocks to figure out why and put an end to it. There’s a bit of a twist but, frankly, it’s very predictable. The delivery of the story is fortunately a bit better. The game doesn’t take itself seriously and this shows in a variety of aspects. For instance, there’s a bit on Trump’s wall and you also use a magical chimney to warp to different worlds. The dialogue itself can be pretty funny but several of the jokes do fall flat. 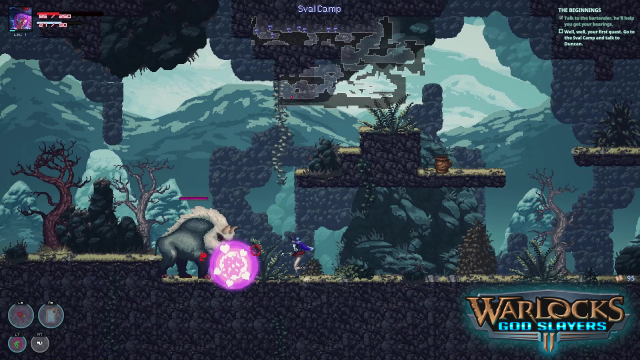 There’s a lot of fun to be had in Frozen District’s Warlocks 2, especially with a group of friends, as long as you’re not bothered by the mostly pointless loot and forgettable story. The visuals are strong and provide pixel art fans with something to adore while the music is a pleasure to listen to. The expanded quest system and level design over the original is also a very welcome addition. You likely won't be spending too much time with Warlocks 2 after a playthrough, unless you're really motivated to explore different characters and builds, but the drawbacks don't distract too much from an otherwise satisfying cooperative side-scrolling action RPG mashup.

This review is based on a digital copy of Warlocks 2: God Slayers for the PC, provided by the publisher.