To be mentioned in the same breath as Deus Ex is a high honor for a video game. One of the best PC games of all time, it set the gold standard for emergent, improvisational gameplay in an action-RPG. Streets of Rogue, while not nearly as impactful or sublime as Ion Storm's masterpiece, combines the experimental elements of Deus Ex with random world generation and permadeath to create a winning top-down rogue-lite where players have the freedom to tackle problems their way. The random nature and steep difficulty of the game translates to some repetition and pessimism, but overall it offers enough character, class, and rule options to create free-form fun outside of the main adventure.

Streets of Rogue has a flippant sense of humor that carries over to its storyline. The city's new mayor, elected on campaign promises of lower taxes and more beer, turned against his constituents, using their tax dollars to fund a personal army. In the aftermath rose a resistance movement dedicated to toppling this mayoral Mussolini. You are the Resistance's newest recruit. 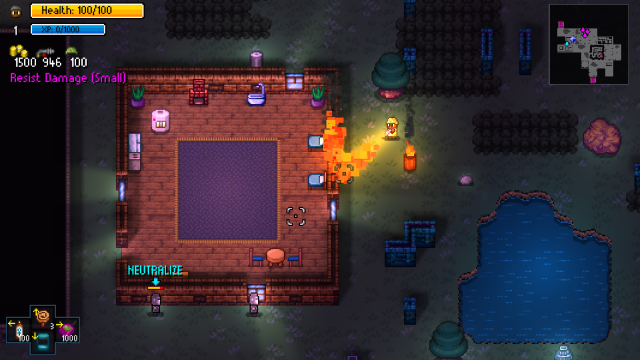 While the anti-mayor campaign serves as narrative context for the game, it takes a backseat to sandbox-style open-ended gameplay, randomly-generated missions and maps, and class-based RPG elements. In short, the nuts and bolts of Streets of Rogue are by far its most elaborate, interesting features. Here's how the typical run goes: you'll start in a staging ground for the Resistance—a hub area of sorts—then choose one of 24 classes and head off to the bottom layer of the city, the slums. Each of the game's five main areas has three levels apiece (the sixth and final area is designed differently), with random missions that must be completed or at least attempted before players can activate an elevator that brings them up one level. The third level of each area, in a clever twist, brings with it a unique event, e.g., a killer robot on the loose or a police crackdown. If you perish at any point on the journey it's back to the hub and the very bottom of the ladder.

Streets of Rogue nails the mechanics and the breathlessness of a rogue-lite. Randomly-generated worlds and situations force players into exciting and unpredictable situations—to a point—and the ever-present fear of death makes every move and decision meaningful. Where the game stumbles somewhat is in its feeling of hopelessness. A great rogue-lite manages the carrot and stick relationship artfully, doling out plenty of damage but providing enough tools and treats along the journey to inspire repeat runs. Essentially, the best of the genre prod, poke, and otherwise punish, but inspire confidence that one day you'll emerge victorious. Streets of Rogue, despite its successes in emergent gameplay and player choice, sometimes struggles to convince its players that repeat failure will translate to something meaningful. 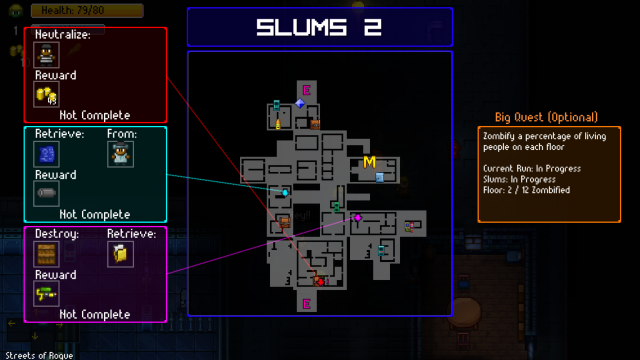 Now, the game does provide chicken nuggets, a black market item in the city streets (again, developer Matt Dabrowski's ironic sense of humor reveals itself) that carry over after a failed run and can be used to purchase new traits and items. However, when you purchase a new ability or tool, you do not own them; rather they enter into a pool of rewards that are assigned or offered at random after completing missions and levels. Players can increase their odds of survival slightly this way, but they're not nearly as significant as permanent unlocks, which would provide the incentive, mostly missing from this game, to tackle the campaign over and over. To ease the pain, Streets of Rogue offers 60+ rule-altering "mutators", including Sandbox mode, which allows players to bypass mission objectives altogether, but they feel like cheating—indeed Sandbox is described as "cheat mode".

Luckily, the moment-to-moment experimentation and decision-making in the game is so rich and varied that it mitigates the impenetrability of the campaign. Each randomly-designed floor in Streets or Rogue is a self-contained playground in which to test the artificial intelligence of NPCs, approach typical problems with creative solutions, and conduct research on several class types, each with their own strengths, weaknesses, and innate abilities. Every mission is open to many different approaches and often unfolds in unplanned ways, courtesy of complex AI pathways and a fully-functional urban environment.

Let's take a fairly standard situation: a safe with a combination lock sits behind a door guarded by a shotgun-wielding shop owner. If you've got the brawn and the bullets, you can enter the shop, kill the owner, loot his body for the combination, and exit with the prize. If you prefer a stealthy approach, you can pass though the shop walls with a wall bypasser—the coolest item in the game—deploy a safe buster to get inside the vault, and then abscond with whatever valuables are inside. Alternatively, you can place a lit cigarette in the air vent outside the shop, filling it with unbreathable air and forcing the shop keeper to flee. While many of these scenarios and missions repeat throughout the game, leading to a "been there, done that" sensation after several runs, the level of player empowerment never wanes.

Character class options add to this feeling of freedom. You can start your game as a soldier, outfitted with mines, grenades, and sub-machine gun, or opt for a hacker, who has the skill to log into computers to deactivate alarms and open doors. You might opt for the thief, who's adept at stealing through open windows and lifting valuables unnoticed, or the doctor, a pacifist who disables enemies from behind with chloroform. Some classes are better than others—stealth builds seem to last the longest—but it's fun to experiment with them, unlock them, and even build your own. 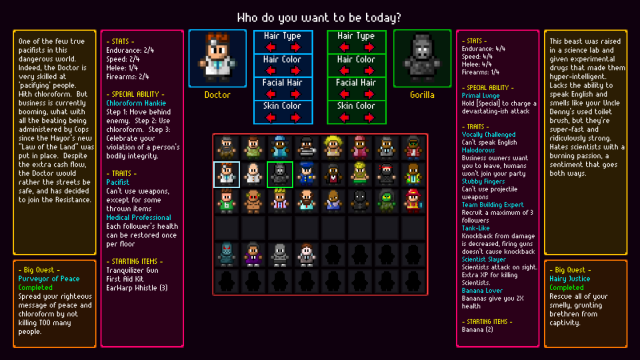 In addition to a lot of class, rule, and gameplay possibilities, Streets of Rogue offers multiplayer for up to four, locally or online. Playing the game with friends is an overall easier experience, as players can resuscitate fallen buddies by paying money or shedding half their health. Creating or joining an online lobby is easy, and a list of canned text options, summoned by clicking the R3 button, allows for some basic non-verbal communication.

Controls in general are fairly straightforward and easy to grasp. Player movement is the smallest bit slippery, but overall it's simple to find your way around each floor and manipulate items in your inventory. Twin-stick aiming and shooting is also accessible and satisfying. 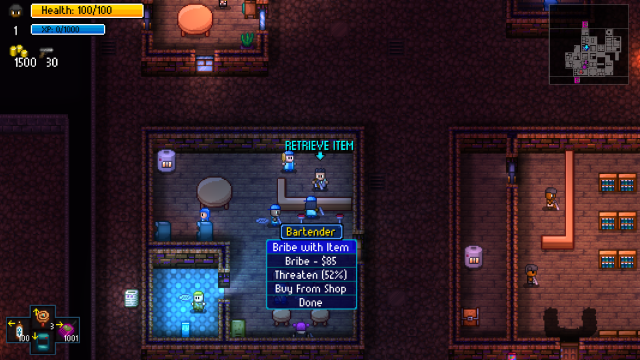 Graphically, Streets of Rogue is a mixed bag. While the top-down pixelated graphics, recycled assets, and samey, blocky buildings don't excite, the lighting, explosion, and slow-down effects are quite impressive.

Streets of Rogue isn't Deus Ex. Due to its rogue-lite rules, repeat scenarios, and random, unforgiving rhythm it can't match the planful, organized brilliance of the seminal PC game. Yet, thanks to complex AI, player freedom, and emergent gameplay, it carries with it some Deus Ex DNA. If you accept the random, chaotic nature of the game, you'll find yourself having a blast with all the character classes, rule modifiers, co-op action, and experimental sandbox mechanics. If you care most about "beating" a game, however, then you may give up sooner rather than later. The journey, ultimately, is far more important than the destination in Streets of Rogue—for better or worse.

This review is based on a digital copy of Streets of Rogue for the NS, provided by the publisher.