Hyperlight Ultimate is a cross between Geometry Wars and Tilt to Live, with a clever faster-than-light (FTL) fuel mechanic. While it looks like a typical neon arcade shooter, it actually eschews shooting altogether—minus some temporary, one-use power-ups. Instead, the player's tiny triangular fighter can only destroy enemy vessels by activating a FTL drive and colliding directly with them. If you run out of gas, you'll be helpless until you pick up fuel cells that pop up at random across each map. This entertaining risk-and-reward mechanic carries the game and helps obscure a repetitive campaign (with one egregious difficulty spike) and a couple of so-so modes.

Hyperlight Ultimate is an enhanced port of Hyperlight EX, which appeared on New 3DS, and iOS and Android before it. Its mobile origins still shine through—particularly in menus—but this Switch version is by far the most refined and feature-rich version of the title. It features HD graphics, 60fps, HD Rumble support, and a brand new four-player local versus mode. 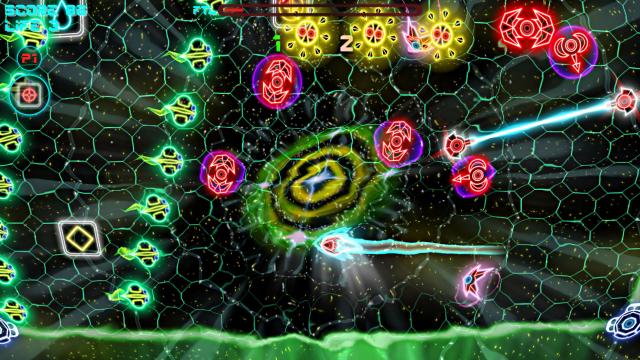 The heart of the game is still Arcade Mode, a campaign playable solo or via local co-op. Divided into four worlds, with four multi-level episodes per world, it's a satisfactory adventure through outer space, punctuated by 12 boss battles. Due to repeat mini-bosses and similar enemy encounters, the levels in Arcade Mode tend to blur together, but overall it's a fun, frantic experience with a tough-but-fair learning curve. That is until the campaign's penultimate episode. It's just a nightmare. Featuring enemy turrets that spray the screen with energy bolts, head-hunting spheroid ships that fire off lasers, and a screen filled to the edge with hostile forces, it borders on the impossible. When (and if) you beat it, the final boss is a cake walk by comparison. Pro tip: to survive the penultimate episode, make sure to activate every friendly automated item as soon as it appears.

Another worthwhile mode is Infinity, an endless gauntlet of enemy waves and bosses. Here players can rack up combos and multipliers (by destroying ships in quick succession) and contend for superiority in online leaderboards. 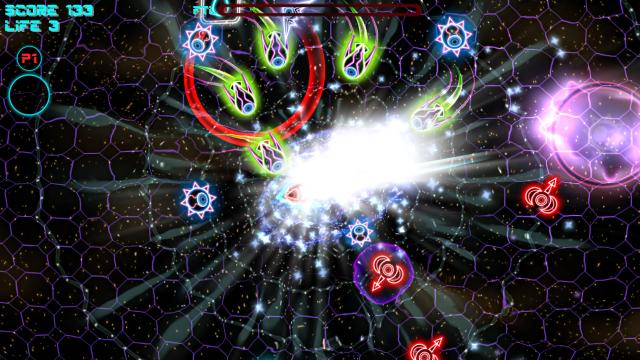 Less successful are Panic Mode and Vs Battle. Panic Mode is similar to Infinity, except that FTL is disabled so enemies must be destroyed by collectible power-ups. Also, traditional analog controls are replaced by gyro controls. This is a neat idea in principle—the game allows players to move the entire Switch system in handheld mode or manipulate Joy-Cons/Pro Controllers in docked mode—but in reality the controls are a little too wobbly. Vs Battle, a brand new addition to this version of the game, is another well-meaning mode that doesn't deliver fully. Here, up to four players can duke it out locally, disabling opponents' shields with power-ups and then going in for the kill via FTL. Unfortunately, it's all too busy, hectic, and random.

In addition to four modes, online leaderboards (eligible for Arcade, Infinity, and Panic), and support for up to four players locally, Hyperlight Ultimate includes in-game medals for hitting certain combo levels, surviving in Infinity, and making progress in Arcade. 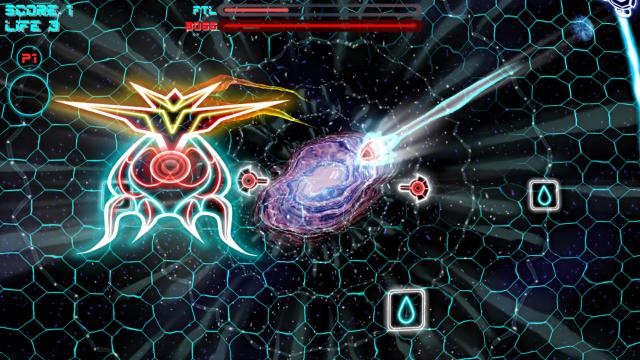 It also boasts some lovely psychedelic visuals, a steady 60fps, tight controls (gyro controls notwithstanding) and some thumping electronic music reminiscent of WipEout. Judged only by its technical and audio-visual performance, Hyperlight Ultimate is a winner.

Judged by its overall collection of modes and mechanics, it's an adequate arcade action game. The inventive central conceit, whereby limited fuel reserves power the ship's offensive firepower, is a success, as is the endless Infinity mode; Arcade Mode, minus one unacceptable difficulty spike, is also enjoyable. Some fussy gyro controls undermine Panic Mode and random gameplay threatens to sink Vs Battle, but taken as a package Hyperlight Ultimate is a fun little non-shooter.

This review is based on a digital copy of Hyperlight Ultimate for the NS, provided by the publisher.