Super Mutant Alien Assault describes itself cheekily as the Citizen Kane of Super Crate Box clones. It might not be quite as influential or ground-breaking as Orson Welles' magnum opus, but it's a decent platformer-shooter with an addictive rogue-like gameplay loop. On the positive side, it features snappy side-scrolling action, fun weapons, clean graphics, and a consistent stream of unlocks. On the more negative side, it suffers from a short campaign, low replay value, and some irksome dubstep music.

A game called Super Mutant Alien Assault doesn't really need a story, but the game actually features a neat little premise, played out in a handsomely story-boarded intro. When aliens attack and destroy Earth, three fleets of spaceships escape with what's left of mankind in cryostasis. Pursued by the aliens, humanity's only hope is a plucky security droid. 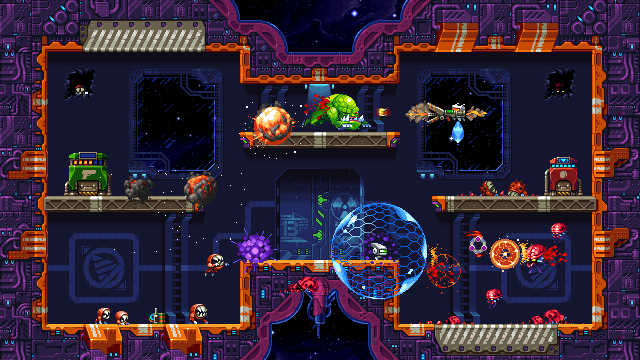 In the game's main campaign mode, players will assume to role of that droid and fight through 12 levels—four per fleet—in an attempt to halt the alien annihilation. In terms of mechanics, Super Mutant Alien Assault is fairly straightforward. The droid moves left and right along a 2D axis, jumps, shoots, activates switches, and deploys a special ability or defensive move. Controls are responsive and snappy, platforming is tight, and the recoil of firearms is satisfying. Physically, the game feels great. The ability to aim weapons up or diagonally would be nice, but perhaps it would rob the game of its signature difficulty.

Difficulty is the name of the game. With only 12 single-screen levels, Super Mutant Alien Assault needs something to stretch out the proceedings—and that something is a heaping of rogue-lite randomness and permanent death. If you die at any point in your multi-fleet journey, it's back to ship one. This is, of course, the bane and the joy of the genre; it can be devastating to reach so close to the end only to be snuffed out, but it can be rewarding to pick up the ideal combination of RNG loot and make the perfect run from beginning to end. 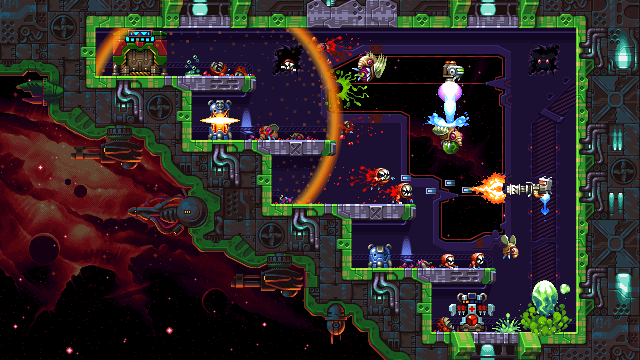 What helps ease the repetition and soften the blow of failure are unlocks, which come early and often. After clearing a set number of rooms—regardless if you die prematurely—you'll earn a new primary weapon (like a mini-gun or laser sword), sidearm, explosive, special ability, or defensive move, all of which pop up at random in crates throughout the game. This steady rhythm of new gear arrivals keeps you invested. So too do the rules of each randomized level. Some ask players simply to survive, while "pressure" stages task them with monitoring stations that explode if left unattended and "hyperdrive" demands they bring fuel from one side of the screen to the other.

Even with randomized loot, unlocks, and thematically-different levels, there's only so much you can extract from Super Mutant Alien Assault. Its 12 levels, once beaten, don't demand repeat viewing, despite normal, heroic, and epic difficulty levels. There's an "endless" mode, with corresponding online leaderboards, and also support for two-player local co-op, but the game just isn't deep or tactical enough to last. 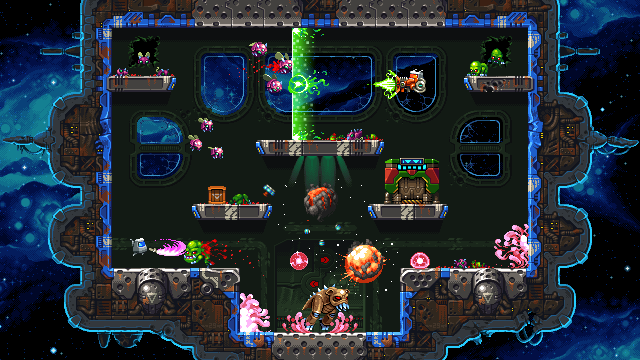 Despite the game's lack of staying power, it's a lot of fun to watch, thanks to bright, clean graphics, monstrous enemy designs, and some slick animations. Sound design is solid too. The audio designers at studio Cybernate captured all those classic sci-fi sounds: humming engines, electronic chirps, buzzing energy fields, etc. The dubstep soundtrack, conversely, is a total miss. Consider loading up your own playlist while defending the universe's last humans.

Super Mutant Alien Assault might be the Citizen Kane of Super Crate Box clones, but in the larger scope of video games it's more of a summer popcorn flick—diverting, good-looking, but ultimately lacking the depth to become a classic. The momentary action is strong, thanks to responsive controls and wild weapons, and the large assortment of unlocks keeps things interesting, yet with only 12 levels and straightforward gameplay the game struggles to remain relevant after multiple sessions.

This review is based on a digital copy of Super Mutant Alien Assault for the NS, provided by the publisher.