Valfaris is a heavy metal album cover come to life. Drenched in blood and set to raw, driving music, it's a 2D action-platformer that channels classics like Contra and Blackthorne while embracing audiovisual designs that would make Black Sabbath proud. Boasting crunchy combat, savage gameplay, and stunning pixel art, Valfaris is a rocking good time and a fine spiritual descendant of Genesis-era run-and-gun games. It's relatively short and sometimes unduly difficult, but in toto a solid sophomore effort from indie studio Steel Mantis.

Set in deep space, Valfaris follows Therion, an honor-bound warrior who has returned to his home, the fortress Valfaris, which has mysteriously reappeared in orbit around a dying sun. Once a paradise, the fortress now supports only tainted environments, ghastly monsters, and an ever-growing darkness. Therion, armed with an energy sword, a sidearm, and righteousness to spare, lands on Valfaris to find his traitorous father and identify the plague ravaging the citadel. 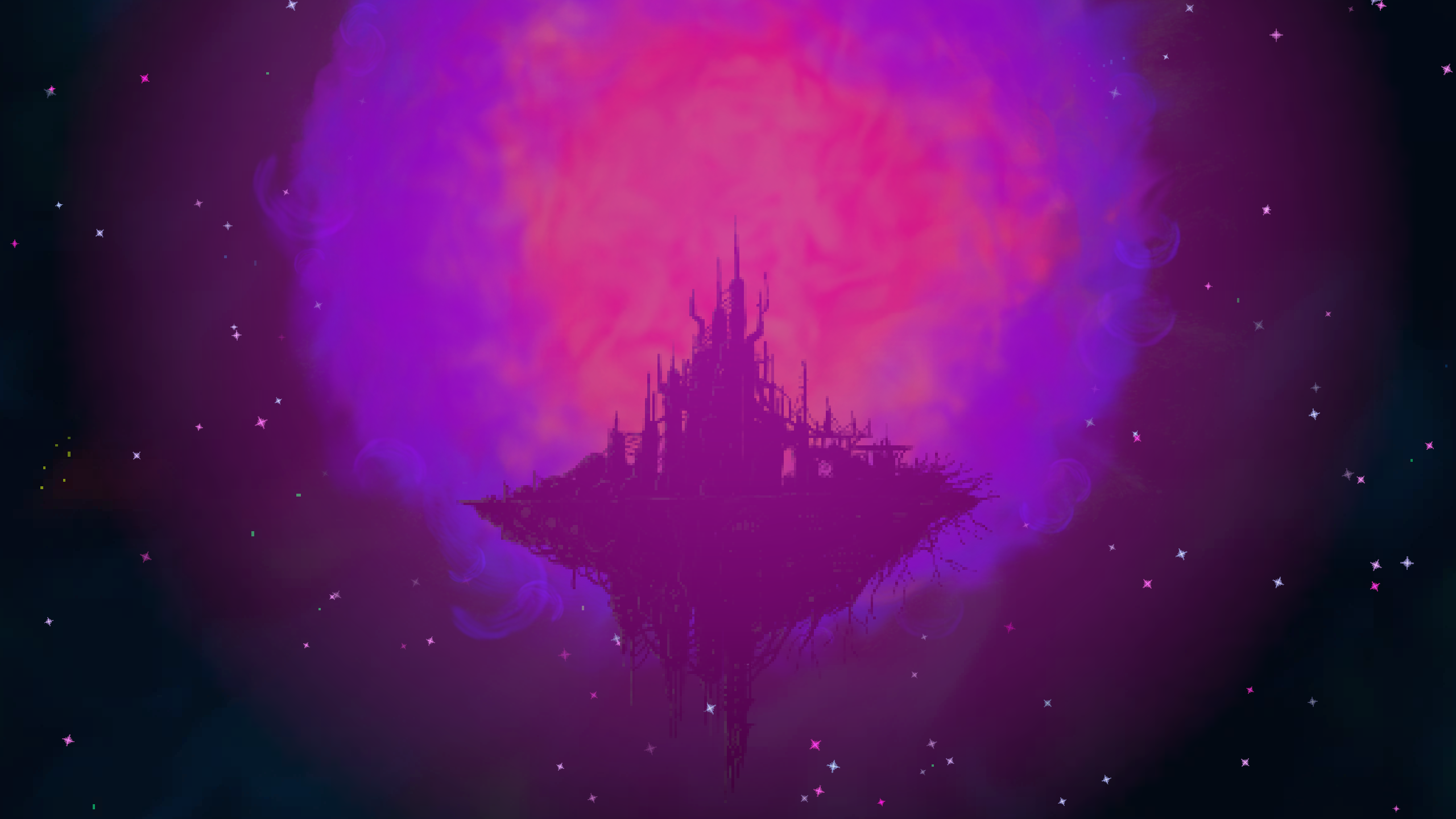 The game's story is appropriately grim, sinister, and disturbing. The dialogue is sometimes clumsy—the game appears to have graduated from the Warhammer 40K school of subtlety—and more questions than answers are left when the credits roll, but overall the narrative hits the over-the-top beats you'd expect from a title set on a floating fortress in space.

Designed by the two-man team that created Slain: Back From Hell, Valfaris is a side-scrolling run-and-gun game that owes a lot to 16-bit Contra. You'll explore multiple poisoned environments, eviscerate monsters, challenge giant bosses, and operate 19 menacing projectile and melee weapons. It's a solid formula enhanced by responsive controls and gory, visceral gunplay. The acid-trip visuals and seismic soundtrack may pull you into the world of Valfaris, but the strong foundational gameplay will keep you coming back for more. 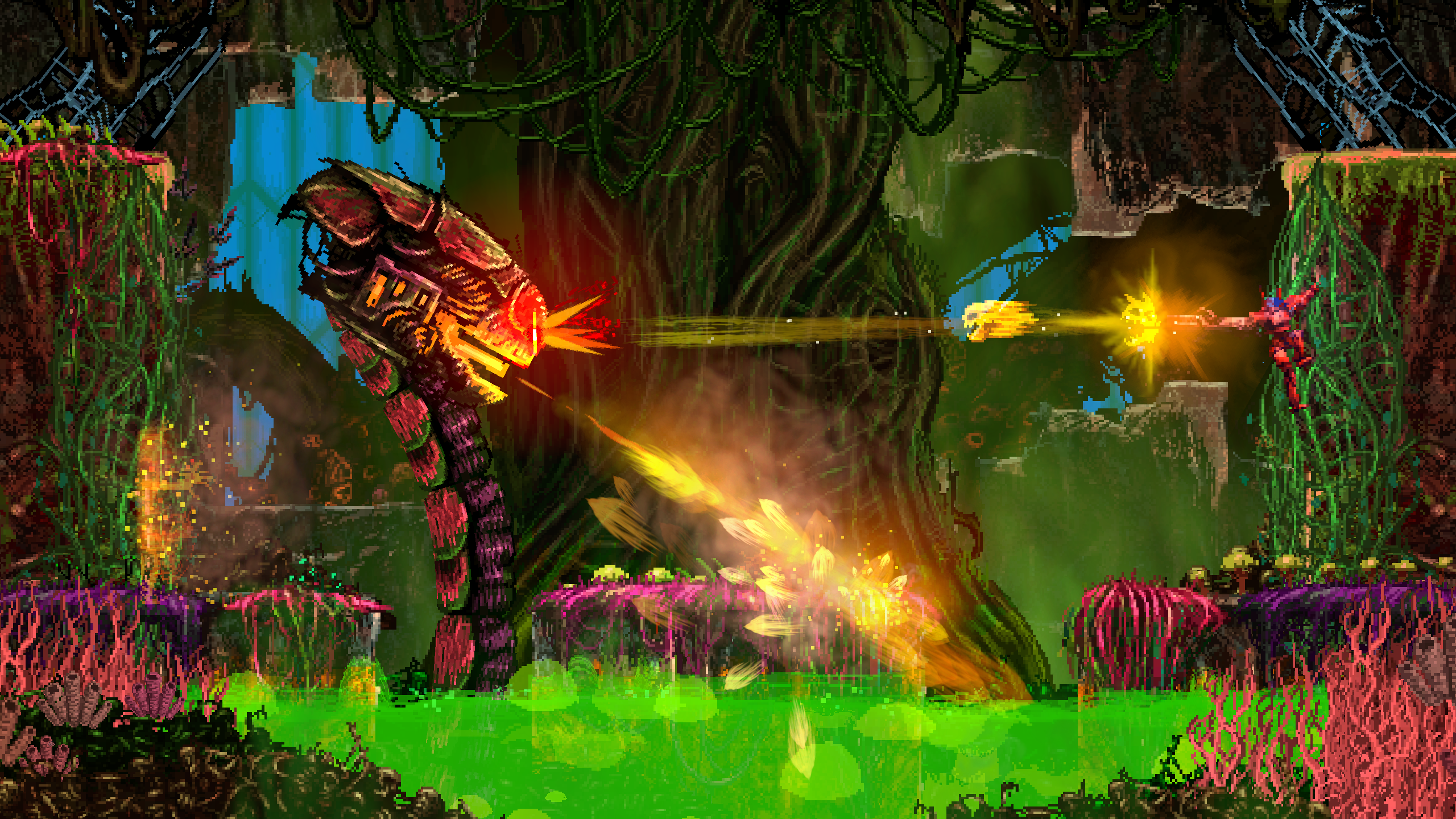 Therion, in the style of Bill Rizer, is a one-man army. He moves deftly across each of the collapsed, blood-caked strata of Valfaris, shooting his main weapon with Y, deploying his sub-weapon with A, and swinging his sword with X (B, naturally, jumps). By holding the left trigger, players can deploy a shield to block or, with perfect timing, catch enemy projectiles; it also allows our hero to angle his shot in eight cardinal directions. While the shield is a nice touch at first, its usefulness wanes in the second half of the game, when mobs of enemies attacking in all directions make slowing down and lining up a deflection much less viable. There are a handful of enemies that are easily dispatched with the shield—and it's always gratifying to parry an incoming sword strike—but the game might be even better (and more fluid) with a rolling dodge move.

Dodge or no dodge, it will take everything you've got to survive the deadly hazards and monstrous enemies of Valfaris. Stages are littered with electric fields, pools of acid, spike pits, and walls overgrown with death-dealing vines. They're also populated with hopping demons, attack drones, gunslinging commandos, zombies, insects, and giant worms. The diversity of level layouts and monster designs is impressive. Perhaps more admirable is the collection of mid and end-stage boss battles. Gruesomely-staged and cleverly-designed, they will demand high levels of skill, patience, and observation. There is a rather large and frustrating difficulty spike with the final boss, which sports three different forms and no checkpoints in between, but in general the encounters are tough-but-fair. 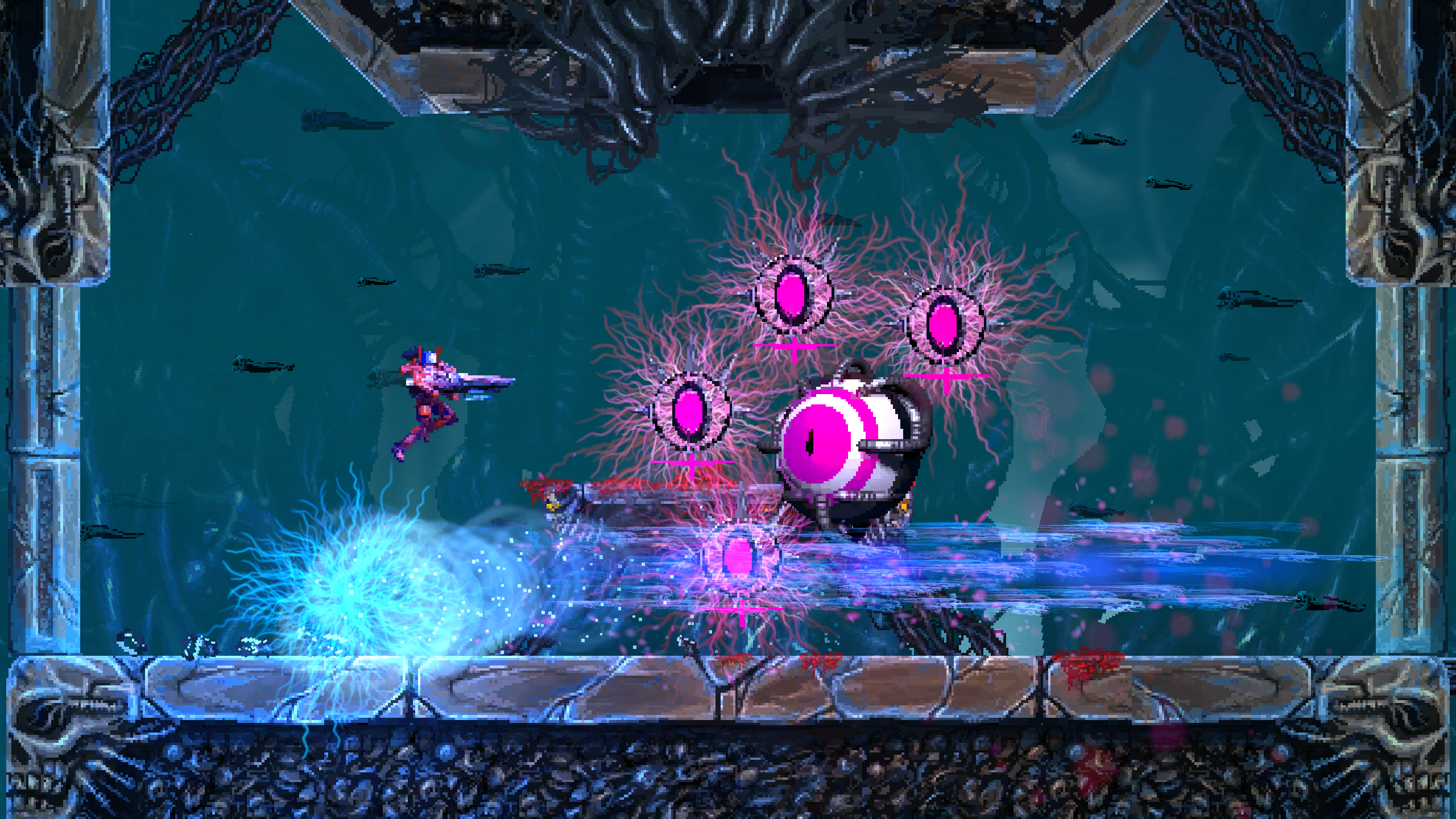 While Valfaris scores high marks in mechanics, level designs, and boss battles, it stumbles in a couple of less vital areas. At six hours it's a relatively short game and with many hazards, lethal enemies, and trial-and-error sections, it's often painfully difficult; it wouldn't be odd to rack up a death count in the hundreds by the last cutscene. Moreover, there aren't many reasons to return to the fortress once you've defeated the final boss—at least not until the developers roll out "Full Metal Mode", a New Game+ option that will arrive for free TBD.

Another misplay is the game's upgrade system. Valfaris has a spectacular collection of dangerous, inventive weapons that either arrive at designated story moments or via secret rooms. Using "blood metal" dropped by enemies or found in inaccessible areas, players can power up these firearms and swords. Therion's plasma pistol gets a spread shot and his energy sword increased damage and range, for example. The issue is that you cannot respec upgrades after you've committed the materials. An awesome weapon might appear near the end of the adventure, but because you've already souped up earlier weapons, you'll never use it. There isn't enough blood metal to go around. As a result the game provides many wild, diverse weapons but actively discourages you from experimenting with them. 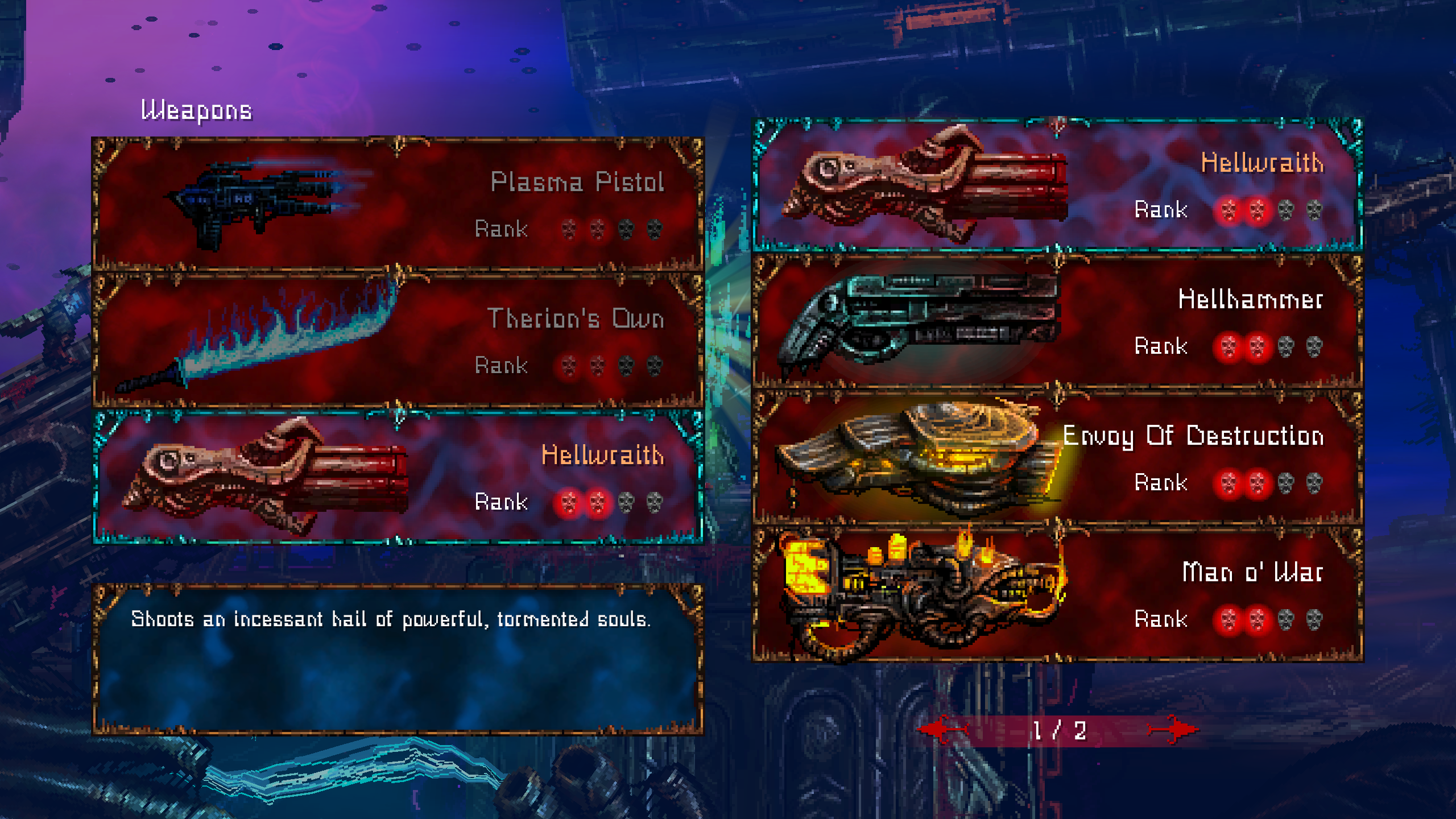 Arguably the best feature of Valfaris is its hand-drawn pixel art, courtesy of Andrew Gilmour. This is one of the most vivid and grotesque game worlds in recent memory, a hellish concoction of pulsating organics and rusty metals. It's a grimdark work of art—one that dovetails perfectly with hard rock tunes from former Celtic Frost guitarist Curt Victor Bryant.

Valfaris is metal incarnate. With spectacular hand-crafted art, thumping music, snappy controls, and visceral gameplay, it's a solid successor to the great action-platformers of the 16-bit age, and an ideal fit for those who want a little Judas Priest with their run-and-gun action. Its short running time, steep difficulty, and counter-productive weapon upgrade system dampen the experience but don't come close to sinking it. In the immortal words of Tenacious D, "You can't kill the metal; the metal will live on."

This review is based on a digital copy of Valfaris for the NS, provided by the publisher.