A satisfying dungeon-crawling twist on the iconic Minecraft formula, which emphasizes loot-gathering and exciting co-op.

There are few gaming IPs seemingly more tailor-made for a dungeon crawling spin-off than the iconic Minecraft. Indeed, this blocky, open-world romp partly adheres to that style as is - emphasizing survival and slaying tons of monsters. So surely a spin-off game fully embracing such dungeon-crawling traits would be great, right? Well.. partially. Mojang and Double Eleven’s take on a dungeon crawling brawler certainly proves fun and mechanically sound enough. Still, I couldn’t help but feel that Minecraft Dungeons was a bit lacking when it came to exciting action, depth, and the adventurous thrills so prominent in the game on which it's based.

In fairness, Minecraft Dungeons manages to be a functional dungeon crawler - except when it’s not. I once ended up spending one particularly long expedition that neared the 40-minute mark. Following my journey through the otherwise-enjoyable Creeper Crypt, I was met with an exit that simply would not let me through. To my dismay, I had to do this elaborate stage all over again. Still, technical hiccups were very rare, and the majority of my experience was both smooth and (moderately) fun. 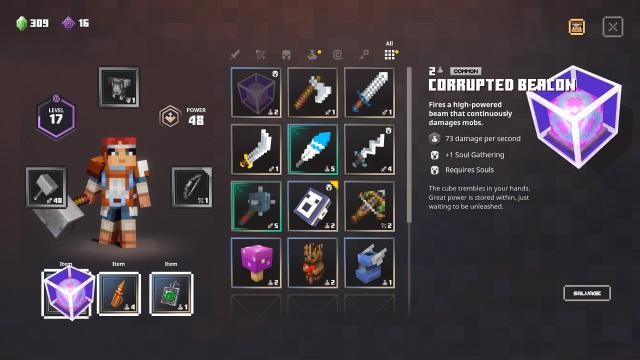 The game feels both like a celebration of the Minecraft brand, and a somewhat more tepid, easy-going version of Diablo. Its content and gameplay are designed to entice fans of both Mojang’s sandbox game and dungeon crawlers. Minecraft players should get a kick out of seeing staples from the original game, such as exploding Creepers, web-slinging spiders, and pesky skellies that shoot arrows. You’ll even run into the ever-ominous Endermen, who comprise the role of mid-level mini-bosses. Other mobs include armor-wearing zombies and necromancers that cast spells. The campaign currently comprises over a dozen distinct maps, each of which are crawling with these classic Minecraft foes from beginning to end.

Despite the basic blocky overlay, each stage presents a unique theme that exudes its own style and atmosphere. You’ve got the Indiana Jones-esque temple rife with boobytraps, the gaping inferno of Fiery Forge, and the lush wilderness of Soggy Swamp. This sense of atmosphere is heightened by some subtle, but melodic tunes, along with nice lighting flair. Again, these are marginal elements, but seeing the orange glow radiate from lava, or sporadic lightning flashes in dark areas, certainly adds to the ambiance. 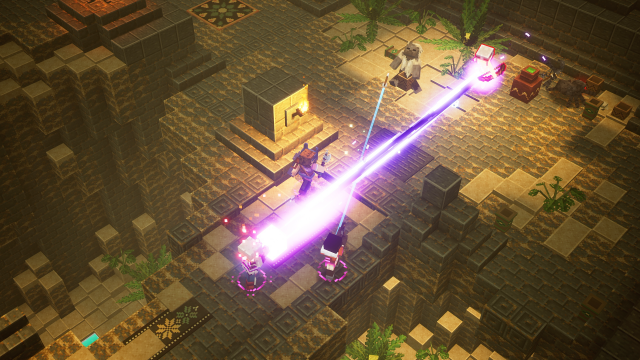 The level designs are also surprisingly vast and elaborate, drawing you in and providing a sense of wonder. Each dungeon is a hodgepodge of randomly-generated areas and fixed portions (the latter of which are largely reserved for intense boss fights). This injects some replay value into a game that could certainly use it. After all, the main campaign clocks in at a mere 6-7 hours.

Along with higher difficulty tiers - which grant slightly better loot - this randomness incentivizes multiple playthroughs of a single level. Stages are often laid out like sprawling mazes with branching paths leading to bounties of loot. This coaxes the player to explore and plunder rather than make a 20-minute beeline to the boss. Secondary missions such as survival sections, contraption triggers, and key-gathering also help diversify the more straightforward crawls.

But what about the gameplay itself? Well, you basically know what you’re getting with Minecraft Dungeons when it comes to mechanics. It plays it safe, and seldom strays from the predictable dungeon-crawling formula. Still, most fans of the genre should find it suitable enough. You’ll be swatting away and firing arrows at countless baddies throughout, which can verge on monotonous at times. But the fast-paced combat usually proves fun and satisfying, especially when trying out new weapons. Slaying hordes of foes can be delightful, but there’s a subtle feeling of cheapness and borderline “floatiness” that can detract from close-range fights at times. 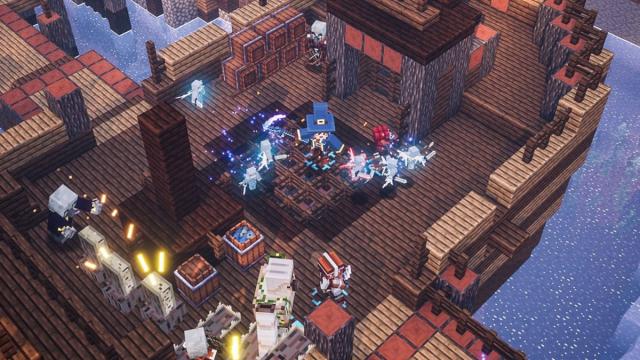 Thankfully, Minecraft Dungeons offers a fine balance of close and long-range weapons to play with, along with artifacts and familiars you can affix to a basic hotbar. These assets range from laser-blasting orbs to explosive arrows to wolf companions. You’re also given potions, usage of which is limited only by a cooldown time. Progression and customization prove simple enough to wrap your head around, while also being quite rewarding. A melee weapon, bow, and 3 artifacts can be used and swapped out at any time, sufficiently mixing up the gameplay and keeping things interesting. One particularly neat aspect is the “Enchantment” system, which incentivizes grinding.

Leveling up will land you an Enchantment point, which can be applied to weapons and armor. Each piece of gear will come with a distinct set of enhancements and/or buffs, which are unlocked when these points are applied. This system can be a bit painstaking at times given all the loot you’ll be cycling through and discarding. Thankfully, a handy salvage system allows you to recoup both gems and Enchantment points, which can then be utilized elsewhere. In addition to chests that yield new loot, an overworld hub will grant access to a blacksmith and trader, allowing you to try out new random items. 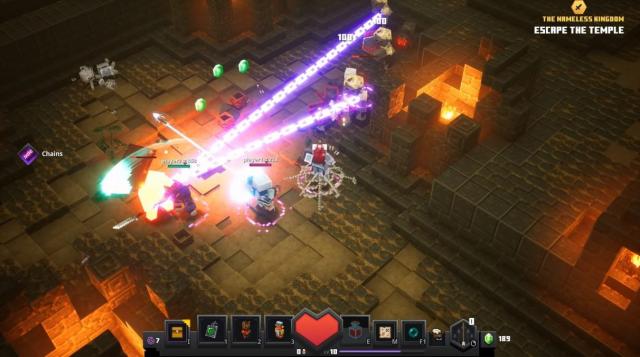 By the developer’s own admission, Minecraft Dungeons emphasizes local and online co-op first and foremost - and it certainly shows. Thanks to the increased action and added firepower, battling through dungeons with a friend or two can truly amplify the fun and excitement. Still, it’s a bit disappointing that, as of now, there’s no way to match up with random people online. The game requires you to connect with other friends who already own the game, which likely means you won’t have a particularly vast pool to draw from.

At least between the solid multiplayer that does exist, and the range of replayable content, there’s a fair amount of depth to be had here. As I’ve touched on, the bounty of goods and difficulty tiers fleshes out the experience, as does the more chaotic “new game plus.” Combat can be enjoyable - especially when using bows and artifacts - and the enchantment system adds to the intrigue as well. But for a game that so heavily emphasizes action, the pacing and excitement could have been amped up. Despite tinges of shallowness and repetition, though, Minecraft Dungeons mostly succeeds as an amusing dungeon crawler. It’s a fun and charming new take on the franchise that many fans should enjoy.