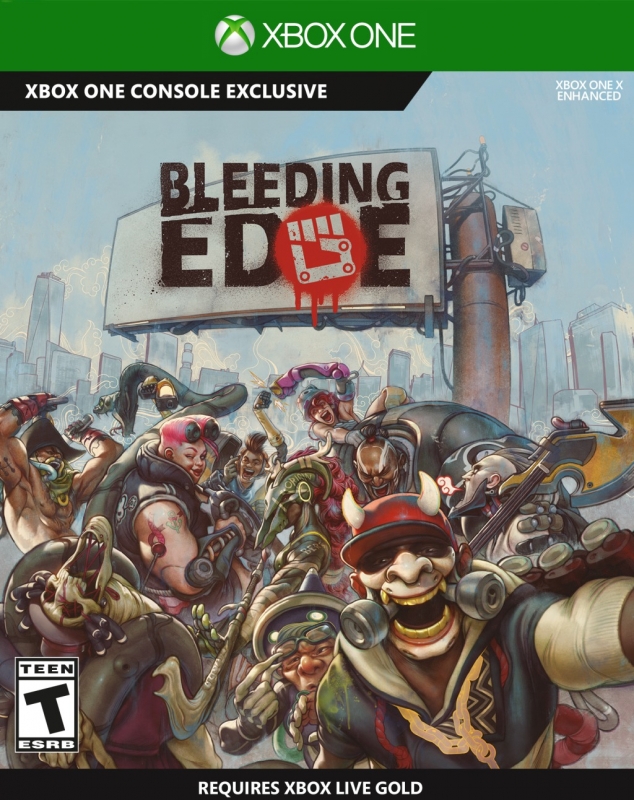 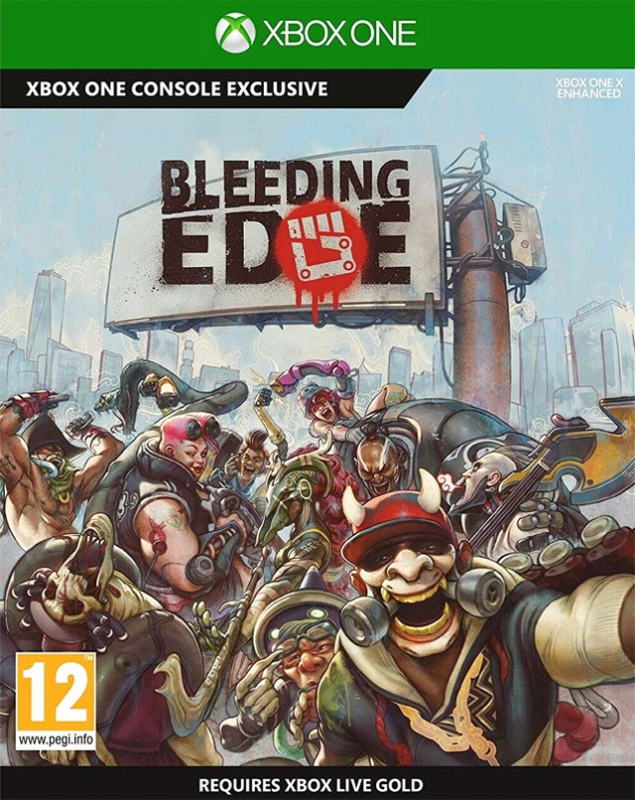 Slender launch content aside, Ninja Theory's first venture into competitive multiplayer ranks among the most joyously-frenzied brawlers of this generation.

Years after grinding on a pet project originally intended as a MOBA, Ninja Theory’s Bleeding Edge was introduced as their newest IP with Xbox Game Studios.  When considering its aims there was reason to be suspicious.  For one, an acclaimed narrative-focused developer sidelining its strongest qualities for arena brawling is uncharacteristic; likewise, I doubt I’m alone in saying their gameplay is typically among their weakest virtues.  But being placed in a creative corner can sometimes work wonders.  After dozens and dozens of matches, those confines have resulted in one of their most mechanically rewarding games to date.

"Sometime in the future..." cybernetic augmentations have become a reality, as have the dystopic conditions often found in these cyberpunk narratives.  Daemon and his anarchic misfits have other plans in mind.  Enter an underground fighting ring called ‘The Bleeding Edge.’  Teams of four duke it out with the hopes of amassing an army to challenge the corrupt system.

As stated before, this background is surface-level context about the fights with hints of a structured narrative later.  Like that of Overwatch or Rainbow Six: Siege, each character has a backstory in their bio with the potential for video supplements expanding upon that in the future.  Outside of audio barks or pre-game chatter, don't expect much dialogue or grander narrative stakes at play; yet, even with this consideration, I'm still fond of the attitude and exuberance emanating from these misfits.

For what little is done from the writing perspective, the diversified roster sells me on the gameplay.  The rundown on character roles is straightforward: damage, support, and tank.  Within each of these categories come sub-categories of melee or ranged.  Aside from the emphasis on melee combat and the third-person perspective, everything I'm describing will be familiar to someone who's played hero shooters like Overwatch or Paladins.  But for all the snark brought up when comparing it to Overwatch's general aesthetic and attitude, this formula feels more enticing by not constraining you into a singular role.

Although I don't want to knock Overwatch's streamlined approach too hard, I'd say one of the toughest hurdles to returning is the expected job rendered by whichever hero's selected.  The rote mechanical understanding can be fun, but experimentation is still limited.  While Bleeding Edge is in a different subgenre, the focus remains the same.  The disparate choices of a hero’s two supers combined with the plurality of unlockable mods grants greater flexibility.  There's an assumption of your role but a nuanced split in playstyles should you make an effort to develop them.

For someone who—typically—does an ordered breakdown of the base mechanics first, I sure did jump on the Overwatch comments, huh?  Considering the comparisons surrounding it, I think it's important to firstly delineate on design ethos before baseline mechanics.  And these mechanics may rank as Ninja Theory's best to date.

Their fondness for melee combat is well-incorporated and expanded upon in both mechanical and visual nuance.  Basic attacks are relegated to one button (X in this case), with three disparate abilities (RB/Y/B buttons) on cooldowns, and one selected super (LB) on a countdown.  With defensive counters being evades and parries, the overall set list is easy to grasp.  This is complemented by several ranged combatants as well.  The number of abilities and supers are the same, and primary attack is relegated to the X button, but how they're forced to consider their range and location can be crucial in protracted fights.

Outside of learning and sharpening your skills in Training, the meat of the game is currently split between two modes: Objective Control and Power Collection.  Control is your go-to territory capture mode where three specific locations will activate in phases.  The A, B, and C locations aren't activated all at once, so fights will occasionally funnel into capturing one point.  Power Collection is about breaking scattered canisters during the collection phase and dropping them off at an unlocked site during the delivery phase.  It's possible for your character to amass over twenty at a time, but it's incumbent on you to deliver them.  Failure to survive or re-entering your spawning base results in all of them being up for grabs.

That, shall we say, clinical explanation doesn't sound so exciting on its own.  But the elements around those modes feel scientifically suited to me.  One of Bleeding Edge's biggest boons would be the length of each match.  The demand to reach 600 control points or 50 power cells (with kills contributing to the total) gives ample time for losing teams to make strong comebacks.  Those matches where my team was initially down but managed to win by the margins have been among my favorite gaming moments of this year.

Extended match times aside, the design ethos around maneuvering and combat also feels deliberately slower: movement speed is toned down, it takes nearly two seconds to transition to your vehicular state, the respawn timer is roughly twenty seconds, and your stamina timer for evading is quite limited.  While it may seem constraining for an action-brawler to employ such limitations, it's not without purpose.  It's like pulling back on a horse's reins.  Giving such importance to your role and the opportunity for any character to retreat comes with advantages; those times of nearly killing someone make for nail-biting chases, but also leave you open to disregard the objective.

These are the kinds of considerations that fuel my excitement in understanding the game.  A simple template is NOT the same as simplistic.  This is made crystal-clear by the heightened emphasis on team-oriented play. Failure isn't limited to singular responsibility but also to misunderstanding your team's makeup and under-utilizing your role.  All the interlocking cogs to consider with a squad's comparative advantages and disadvantages is part of what makes it so enticing.

What excites even more is just how fun it is play with this surprisingly balanced roster.  The plurality of specializations ranging from trappers, harassers, heavy-hitters, and more feels substantial and engaging.  While I won’t insinuate Ninja Theory released a balanced roster akin to Chess, I would compare it to Gigantic's 1.0 state; some tweaking is in order but any team configuration can be managed.  The elder witch Maeve is the one most often accused of being OP.  Although that’s technically true, I’m a bit apprehensive on the extent, since she is a glass cannon.  Using a well-timed evade against her cage ability leaves her awfully vulnerable.  And that's something to consider with each team formation: the ability to counteract your opponents is there.  While I do believe nerfing some characters’ abilities should happen, my greatest defeats felt like actual lessons rather than gripe-fests about a stacked deck.

Another contributing factor to any character's appeal is the eccentric design and smooth-as-silk animations.  Just like with Hellblade: Senua's Sacrifice, Ninja Theory utilize AAA-echelon expertise in this modest title.  Whether it's the kinetic brute force of Buttercup’s uppercut or Níðhöggr’s death-metal inspired toolset, every move is clearly telegraphed and feels polished.  Even innocuous extras, such as flecks of paint flying off Daemon’s sword with every swing, showcase aural & visual distinction between them that feels substantial.  Although ranged characters don't stimulate the same lizard-brain sensations in hitting someone, sound foley and visual communication of their moves is crystal clear too.

Despite successes on such technical fronts it's not without annoyances on its artistic liberties; namely, the outlandishness of some characters can be grating.  Most are refreshing, like a robotic snake controlling a mummified corpse, but a couple of duds are found.  A tank like El Bastardo looks like a 40-something male dancer who has finished his Chippendale's shift and donned a cowboy hat as his best disguise.  Even when examining the cast from a bird's eye view I understand the variety sometimes feeling too much for the sake of it.  But when you get past wondering why a corpulent southern-belle human/motorcycle hybrid is there, the diversified designs act as complements to the game's chaotic nature—instead of distractions.

The elements of straightforward game design, upbeat tracks, and visually sumptuous chaos all give Bleeding Edge this unspoken harmony.  One shouldn’t anticipate deep combat systems, but that’s not where the focus lies.  It’s in the emphasis on presentation, whether considering the UI, vivid color usage, to the general polish (solid online infrastructure included), that makes it so rewarding.  Even the urban-electronic soundtrack hits that perfect mood before, during, and after fights.  The fact that David Garcia Diaz transitioned from the guttural, earthy tones of Hellblade to an upbeat revision of Jet Set Radio shows remarkable talent.

One of the most consistent qualms you'll find is the slim launch content; you can include this review to the list as well.  Yet I'm still left not feeling the sting of it, all things considered.  The first consideration comes down to the thirty-dollar retail price.  While the drawbacks of having eleven characters, five unique maps, and two modes at launch warrants it being called slim, I simply find the dynamics across all the available content to be totally engaging.  Each map is aesthetically distinct and well-crafted.  The environmental gimmicks give them a special energy and I like learning the various pathways and shortcuts.  Supplementary content like sundry hoverboard designs and fume trails are worth unlocking; that said, the current range of unlockable skins is a bit disappointing.  All of these extras are purchasable exclusively with in-game currency, though perhaps that could change.  In the end, my appeal to "quality over quantity" is intended to display my enthusiasm as merely dampened rather than outright deflated.

When it comes down to it, Ninja Theory should be applauded for stepping outside their comfort zone.  By venturing into untrammelled territory, they had to concentrate on what's historically been a less-praised quality of their titles.  Despite the odds and new ground broken, Bleeding Edge is a worthwhile multiplayer game that's incredibly satisfying across visual, audio, and mechanical fronts.  In a generation of modestly-praised hero shooters & MOBAs failing to conjure a healthy audience, it's tough to say how the team will handle successive updates.  But with the game we were given, I consistently internalized this thought after a match: "just one more game... just one more game."  The mantra every multiplayer game strives towards.