Yooka-Laylee and the Impossible Lair (NS)

Yooka-Laylee and the Impossible Lair (NS)

Blessed with the charm, wit, and fun factor you’d expect from such a talented group of creators, this should be a guaranteed crowd pleaser.

The announcement of Yooka-Laylee in 2015 was met with widespread excitement from certain elements of the gaming community, as countless memories were cast back to Rare’s glory years in the 1990s. With developer Playtonic being largely made up of Rare alumni, it was seen as a spiritual successor to the first two Banjo-Kazooie (BK) titles, which led to a record breaking Kickstarter campaign to help fund development. Expectations were high, but the reception was ultimately lukewarm; in seeking to emulate the BK blueprint, it inherited the same sort of design flaws that, acceptable 20 years ago, simply don’t fly today. The sequel sees a change of approach, with the action taking place on a 2D plane, rather than in expansive 3D worlds. 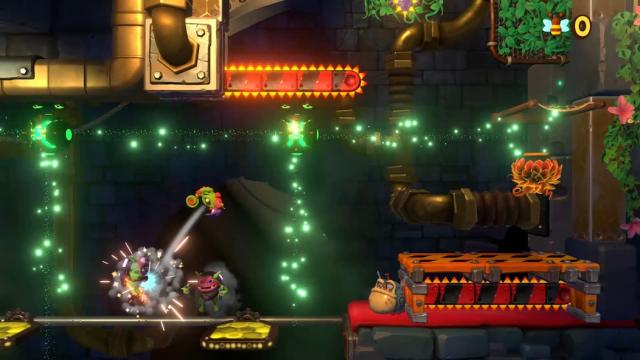 Naturally, comparisons will now shift from BK to the hallowed Donkey Kong Country (DKC) trilogy that graced the SNES in the mid ‘90s. That’s quite a benchmark that people will expect to be met, but whilst The Impossible Lair struggles slightly to reach that level, when taken in isolation there is no doubt that it is a high quality affair. It’s a visual and aural feast that runs at 60 FPS, with fluid animations, detailed environments and memorable characters, perfectly complimented by a distinctive soundtrack.

As seasoned veterans, the level design from Playtonic is unsurprisingly solid, serving up a fair challenge for all types of player. Although opportunities to stray off the beaten track are not as frequent as other offerings in the genre, you can take detours to little alcoves and hidden passages, effectively masking the notion that you’re confined to one particular path. There’s a deviation from clustering stages in world themes; just because you’re in the desert, it doesn’t necessarily mean you’re about to be plagued by sand based courses. Any and all sorts of levels are thrown at you - there’s a real sense of surprise in not knowing what sort of location you’ll come across next. 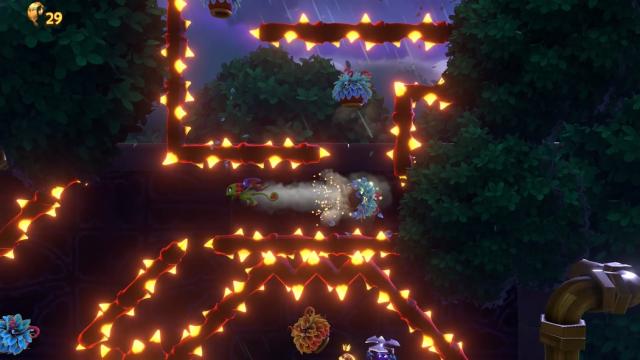 It’s not uncommon for the story to be seen as an irrelevance in a platformer, and whilst I don’t think The Impossible Lair is going to change anyone’s mind, Playtonic do spin a yarn with the usual kind of humour they’re known for. There’s a wink and smile with some of the dialogue and references, and they’re not afraid to laugh at themselves or the gaming community with self deprecating jokes.

Chief villain Capital B must be defeated once again, and the only way to topple him and save the Royal Stingdom is by navigating his Impossible Lair. You can tackle this mammoth task right away if you wish, but it’s a massive undertaking fraught with peril. You’ll be taking a lot of damage in this level, and the only way to alleviate said damage is to rescue members of the Queen’s Beettallion that are locked away in the many chapters scattered throughout the land. Each bee you save acts as a hit point on your shield in The Impossible Lair; the more you save, the more damage you can take as you head towards the final showdown. 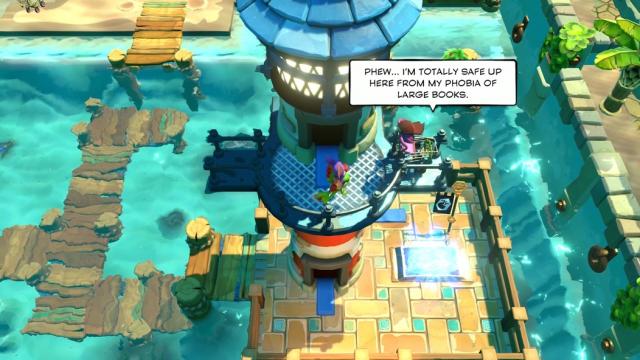 Whilst predominantly a 2D platformer, the overworld is viewed from a top down perspective. This offers a welcome change of pace between chapters, and allows more exploration than is found in the generally linear levels. It’s a lively world that feels both compact and extensive; wandering around never feels laborious, and it’s exciting scurrying about trying to uncover all the little nooks and crannies. There is a quick travel option that warps you to any level you’ve found, so traipsing from one corner to the other is never a necessity.

There are a multitude of things to do, and I found it difficult to tear myself away knowing that there was uncharted terrain waiting to be traversed. It’s definitely one of those games that pulls you in, and I found myself thinking things like  ‘I’ll just do one more level’ or ‘I’ll just see what’s through this door’ on a regular basis. Don’t be surprised if you find yourself pulling a few late night sessions with this one.

The Stingdom overworld is where you will be using all of the collectibles that you come across. A common staple in platformers, sometimes to the point of overkill (see Donkey Kong 64), you’ll be hunting for three main items to help on your mission. Quills are found in abundance, and are to Yooka-Laylee what notes are to Banjo and Kazooie. These are used to acquire upgrades (more on that later) and buy items that help to remove barriers blocking your way. There are also five T.W.I.T coins hidden in each level, which are used to pay off Trowzer and knock down his obstructive ‘pay walls’ that also hinder your investigative urges. Some of these coins require a fair amount of patience, cunning and intuition just track down, let alone gather, and will certainly prolong the play time for completionists. 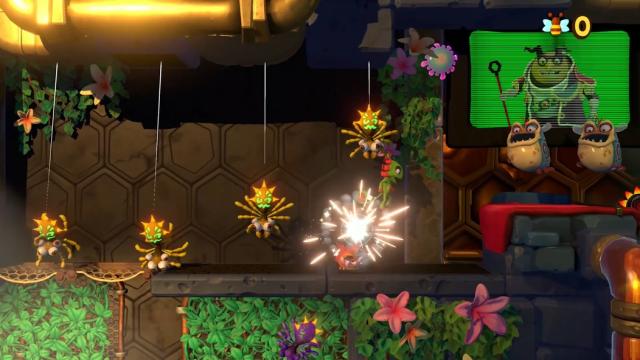 The most interesting collectible, and one of the most notable features in The Impossible Lair, is the Tonic. There are 62 to find in the overworld and, once gathered, they give you the chance to upgrade or downgrade Yooka Laylee’s skills in the main game. The catch here is that the Tonics you equip have a direct effect on the number of quills you can collect in the level. This is calculated using a multiplier effect; every Tonic has a multiplier value that either increases or decreases how many quills you will receive once the level is over. The harder you make things for yourself, the more quills you will end up with. Greater risk, greater reward. This adds a degree of strategy as you weigh up the costs and benefits of what you equip, and also allows you to have a bit of influence over how difficult things are.

In light of more readily available criticism from customers, developers are now having to implement measures of adjustable difficulty to make their games as inclusive as possible, and I think the what Playtonic have done here is superbly integrated. Not all Tonics have a direct impact on your characters, as some simply alter the visual aesthetic of the game, adding another welcome facet of customisation.

I do have a few minor bones to pick with The Impossible Lair. There are some pretty lengthy loading times, but they’re strategically placed so as to minimise frustration. Booting your file up from the start screen takes a fair while, but once that’s done it’s only really when you enter a chapter that’ll you find yourself briefly waiting. Conversely, death is greeted by an almost instant restart, which is exactly what you need when you’re trying to tackle some of the devilish courses later on.

Yooka also controls a little more loosely than I’d like, and even several hours in I was rolling off ledges or falling foul of traps and enemies because the movement was not quite as tight as I’d expect. Yooka handles very well on the whole, but for platforming you want your character to move with absolute precision, and I feel The Impossible Lair is just a little off the mark. Finally, when Laylee flies off after you’ve been hit, retrieving her is an absolute nightmare. She’s supposed to be part of a team with Yooka, but she tries her darndest to make it as tough as possible to reunite - if I didn’t know better I would swear she was actively avoiding her buddy. There’s a merciful amount of Laylee bells that will recall her if she’s missing, but it doesn’t lessen how irritating she can be when she’s aimlessly flying about. 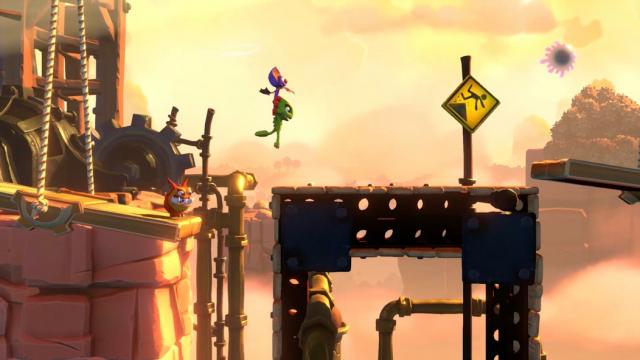 Quibbles aside, I’m pleased to say that Yooka-Laylee and the Impossible Lair is a great game. I feel that Playtonic made the right decision in changing to a 2D perspective, as they’ve been able to draw from a wealth of experience to craft a hugely enjoyable adventure. It falls a little short of the hallowed DKC trilogy, but it’s the closest you’ll get to a new entry in that series. Blessed with the charm, wit, and fun factor you’d expect from such a talented group of creators, this should be a guaranteed crowd pleaser.

This review is based on a digital copy of Yooka-Laylee and the Impossible Lair for the NS, provided by the publisher.