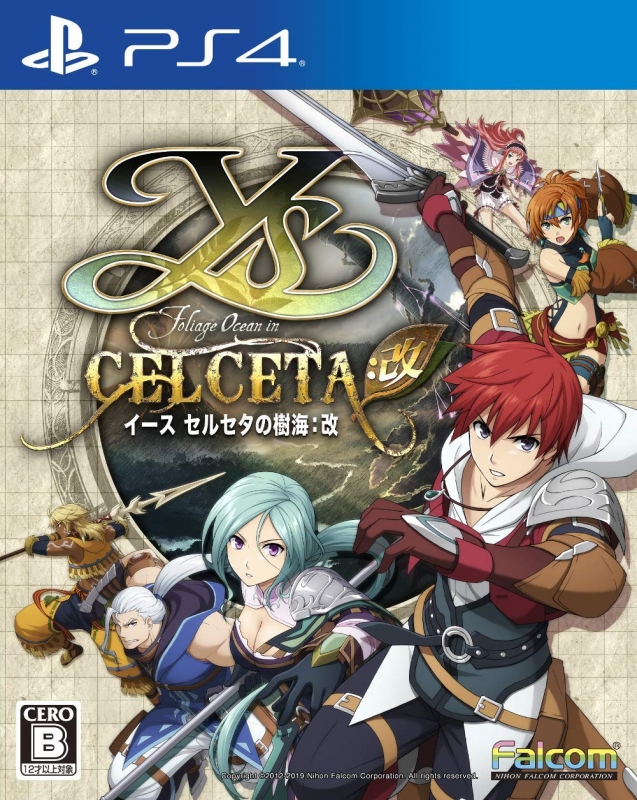 Ys: Memories of Celceta is one of the best Ys games yet.

Ever since I first tried out an Ys title, thanks to a fortuitous Steam sale, Falcom has fast become one of my favorite companies. In similar fashion to how Gust has perfected the art of the RPG synthesis system, Falcom has seemingly perfected the art of the action RPG battle system. Fast paced, and with creatures that hit hard enough to make dodging more than just an afterthought, it's truly a joy to play. With their latest title Falcom (and Xseed publishing) have come to save the PSVita from an otherwise slow year when it comes to exclusives.

Ys: Memories of Celceta is another adventure with series mainstay Adol and is actually a revisit of Ys IV, as well as its Western debut. No worries if this is your first go at an Ys game, though, as each game focuses on the trials of a specific region and is more about what's happening locally than anything that's happened to Adol in previous games. His other adventures will be referenced passingly every now and then but that's really about it. Heck, Adol even has amnesia in this particular title, so newcomers can learn about Adol right along with Adol himself.

Amnesia might seem like a tired trope of the genre, but it's used pretty well in Ys: Memories of Celceta because it isn't the narrative's main focus. Adol went trouncing around in the forests of Celceta, which no one typically ever returns from, but actually returned sans memories. Not letting a few broken synapses get him down, Adol quickly gets himself involved in the goings on of the frontier city Casnan, saving some miners from unexpected monsters along with his friend Duren. This impresses the new Governor General who offers him a job: return to the forests which took Adol's memories from him and map them out for a cash reward. Seeing as braving the forest will likely get Adol's memories back for him as well, he teams up with Duren to take on the challenge. This puts the emphasis on exploration rather than a quest to retrieve your memories and it helps to give you a reason to check out every nook and cranny of the forest because for each 10% of the forest you travel through you're given some money by the Governor General.

Simply mapping out the forests could be pretty uneventful, but as Adol searches its depths he quickly comes upon villages of people living within the forest unbeknownst to those on the outside. Getting to know each village and their problems eventually leads Adol to learn about the secret behind the forests and quests that are more important than simply mapping it out. While Adol himself is largely silent, how he's portrayed is endearing since it moulds so well with how I perceived him as a player. Other characters consistently berate Adol for getting his nose into every single interesting thing he can find and being the first to volunteer whenever something needs to get done. It paints a picture of this endlessly curious adventurer with constant barrages of questions for anyone willing to enlighten him, making him a very likeable character.

While the visual aspects of the game are decent, they're definitely not the best the system has to offer; that compliment is reserved for the soundtrack, which is truly exceptional. The voice acting is also great... when it's present - spoken lines are unfortunately minimal. Overall the narrative is enjoyable and presents a solid build up from humble beginnings to suitably climactic finale, and while the story won't really be on your mind for weeks afterwards it works well as a means to an end for the gameplay.

And the gameplay is definitely the star of the show, as it is in most Ys games. What makes a great action RPG battle system are enemies that hit hard enough to make mitigating damage a necessity, precise controls, and some level of strategy to your attacks. Ys: Memories of Celceta has all of that. Not only do you need to dodge and block to decrease the damage you take, but timing either of these perfectly just as the attack would have hit you gives a short bonus. I was never good enough to specifically go for these benefits, but it was always satisfying during a boss fight to get a short time-slow effect from an unexpected perfect dodge. Having boss fights with attacks that do a quarter of your health can easily become an irritation but with its fast paced combat and perfect controls I always found myself enjoying the challenge rather than lamenting it. Strategic thinking also comes into play, though it only provides a bonus and can be completely ignored if you're willing to spend a bit more time on the battles.

When you travel around the forest you can access up to three characters that you can instantly switch between. Each character has one of three different attack types: slash, thrust, or strike. Many of the enemies you come across will only be susceptible to one of these damage types, so you can kill them more quickly and get better drops from them if you switch to the appropriate character. The bosses don't play out in this way though; they're more like bullet hell bosses where pattern recognition and dodging are the most important things to master.

While the battle system is near-perfect I was much less impressed by the puzzles throughout Memories of Celceta. Every now and then you're treated to a touch-based puzzle but most of these are far too easy to be enjoyable. There is a puzzle near the end that actually took some thought on my part, but it proves an exception to the rule; most of the puzzles are too simplistic to be anything other than time extenders. I don't think that every RPG should have puzzles on the level of Professor Layton, but if you're going to include something like that it should be more like a puzzle and less like a chore you have to get through in order to access the next section of the dungeon.

Some dungeons depend on the abilities of your allies or special tools you find within the dungeon itself (think Legend of Zelda), which is not something I'm keen on, but most of them are given uses beyond the dungeon they were introduced in so this can largely be forgiven. It's also to the game's credit that none of the boss fights I can think of ever require these abilities/tools, making them more challenging in and of themselves and not glorified puzzle boss fights.

If there's one thing Ys games are consistently criticised for it's their overall length; they tend to be shorter than most games in the genre, and Ys: Memories of Celceta continues this trend. My playthrough took roughly 25.5 hours, which is a little below the average for games of this type. Multiple difficulty levels and side quests help to increase the value for your buck a bit, but my playtime included most of these side quests and 99% of the forest explored, so don't assume you'll get hours and hours of playtime beyond that.

Ys: Memories of Celceta is one of the best Ys games yet. The largest world in the franchise to explore, classic Ys fast and furious gameplay, and some beautiful music make this a title any JRPG fan with a Vita should own. If it was longer, boasted more polished presentation, and featured more interesting puzzles then I would recommend it to almost any gamer. Here's hoping the next Ys title delivers all of that.

This review is based on a digital copy of Ys: Memories of Celceta for the PSV, provided by the publisher.