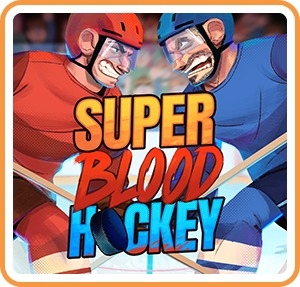 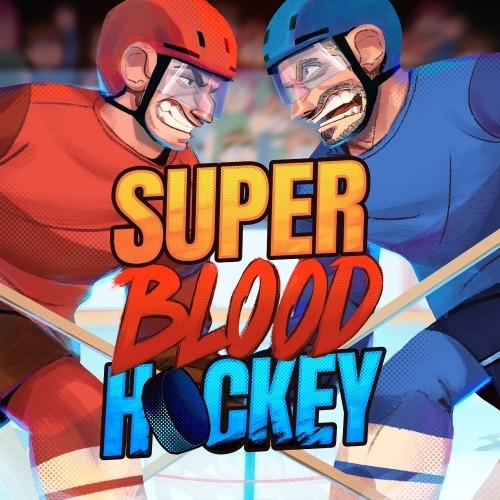 If you played Ice Hockey on Switch, via the online NES emulator, and found yourself wanting more blood and a dose of dark humor, Super Blood Hockey is the game for you. Built according to the structure of Nintendo's 1988 take on ice hockey, it's an accessible arcade sports game that's particularly fun in local four-player bouts. Due to some frustrating AI and shallow gameplay, it's less enticing as a single-player experience—several solo modes notwithstanding.

A throwback to the 1980s electronic sports scene, Super Blood Hockey is a 2D overhead hockey game in which each team has five players. As with Ice Hockey, there are four player types: a goalie, a pudgy enforcer, a tall and lean marksman, and a well-rounded power player. Ahead of a match, you as the player will select your team—you can go heavy with enforcers, or fast and agile with marksmen—then hit the ice. 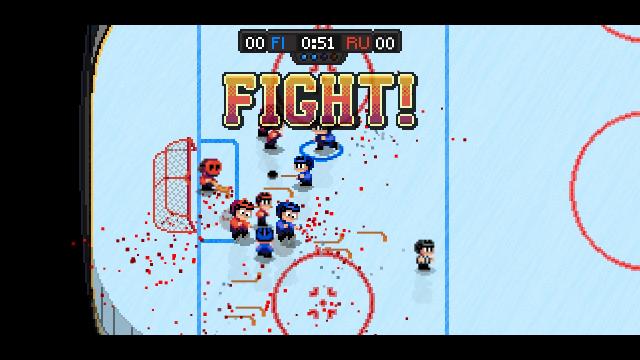 With truncated periods, no penalties, and approachable controls, Super Blood Hockey embraces the mechanics of early console sports games. Novice and casual sports fans will find no difficulty embracing the button commands—pass, shoot, check, and switch player—or comprehending the rules, although simulation fans may find the game's lack of tactical depth unsatisfying. Truly, the game's simplicity is a double-edged sword—it's easy to grasp and fun to play with friends, but may not stay in your regular rotation for long.

While the title mostly conforms to Ice Hockey, it diverges in its commitment to bloody violence. This involves a cosmetic element—each collision causes a spray of pixelated blood—and a gameplay element, where if a player checks an opponent too many times both sides will enter into a violent melee. Whichever team is left standing is not penalized but rewarded with a power play; it's a clever subversion of the rules. Mostly, though, the game's trademark bloody graffiti doesn't add much to the proceedings.

In additional to a standard Exhibition mode, Super Blood Hockey features a Tutorial Mode, a Tournament Mode, a Challenge mode, and a season-long Franchise mode. Challenge mode, with its bizarre scenarios (12 v 12, for example) and unlocks, is a welcome addition, but Franchise mode is the clear winner. It's essentially the game's story mode, where you'll recruit a team, build up the stats of individual players, and micro-manage everything from rosters to player diets. Wrapped in a darkly humorous story where "give drugs" is a command and deceased players are deposited in a dumpster behind the clubhouse, Franchise mode is a nice concession for sports game fans who enjoy the minutiae of team management.

The one issue with Franchise mode, and all other solo modes, is inconsistent, frustrating AI. Even on easy mode, rival teams boast skilled puck-handlers and defenders, whereas friendly skaters are inferior, often moving out of place or leaving huge defensive holes. With other human players on your team, it's actually easy to exploit enemy AI, but in a match with four computer-controlled teammates, it's difficult to win. 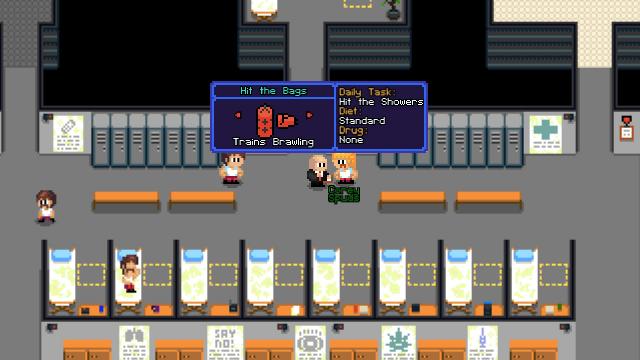 Just as Super Blood Hockey nails the mechanics of 1980s and early 1990s hockey games, it delivers graphics worthy of the era. The chunky character models are charming and easy to follow in the chaos on screen, and the clean colors and backgrounds an ideal match for a simple sports game. The chiptune soundtrack isn't half bad either.

Even though it leans toward sports simulation with Franchise mode, Super Blood Hockey is in its heart an old-school pick-up-and-play arcade title. It's easy to learn, fun with friends, and not afraid to shed a lot of blood. At the same time, its gameplay systems are a bit shallow and its friendly AI insufficient. As a result, it's a game best played with others.

This review is based on a digital copy of Super Blood Hockey for the NS, provided by the publisher.