With the critical success of Thatgamecompany's Journey back in 2012, it's a shame more games aren't following the same path. With terrific environmental narrative, engrossing art style, and captivating sound design, Thatgamecompany's magnum opus remains unmatched in many ways. Mooneye Studios clearly takes inspiration from Journey with their first release Lost Ember, and even though they may not reach the staggering heights of their inspiration, they certainly deserve praise for their efforts.

In Lost Ember, players lead a spirit that has been reincarnated as a wolf in a third-person narrative adventure. Early on, you meet a flying orb - a Lost Ember - who acts as your guide and companion as you both unravel the mystery of why neither of you have made it to the City of Light in the afterlife and try to make your way there. The story is primarily told through flashbacks that play when you reach markers in the form of red smoke. When initiated, these flashbacks detail a revolution during the reign of an ancient civilization through ember-like silhouettes. The story is well told and initially interesting but becomes predictable towards the end. Like Journey, though, the end isn't necessarily as important as the way you get there. 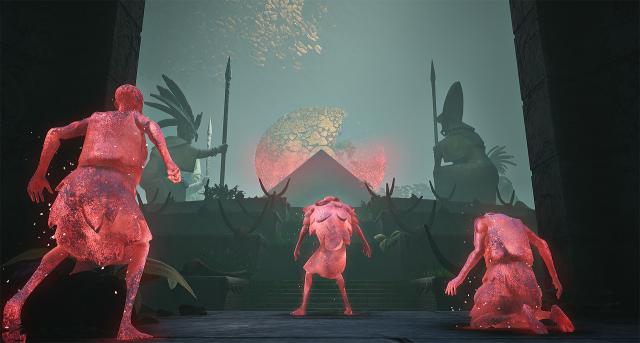 Through the seven chapters - which can take less than five hours to complete - you travel from marker to marker to initiate memories, but it's the serene moments between these memories where Lost Ember is at its best. The quest has you journeying across different environments that come to life thanks to the strong art style and Mooneye's use of the Unreal Engine. The different animals you come across are as visually appealing; they look charming and animate convincingly. The game uses a stylized visual that fits well with the tone and at times feels like a moving painting. Whether you're rushing through jungles, following a herd of bison through a dust storm, or climbing snow-peaked mountains, there are plenty of opportunities to stop and absorb the scenery. You can even trigger a slow-motion button at any time to further highlight the beauty. Unfortunately, these graphics come at a cost to performance, as frame rate drops and stuttering was quite common for me, particularly when transitioning to new sections.

Mooneye pays just about as much attention to the sound design and, in some ways, it is even stronger than the visuals. The ambiance and sounds of animals are particularly noteworthy. The flapping and chirps of different birds, the trumpeting and stomps of herds of elephants, and the howling and yelps of your wolf convincingly place you among animals and their environments. The powerful score poignantly highlights key moments in the game as well. The voice acting from your Lost Ember isn't all that great, though. One has to wonder if his commentary is even necessary to relay the story. It likely would be more impactful if Mooneye let the player interpret their own story from the game instead. 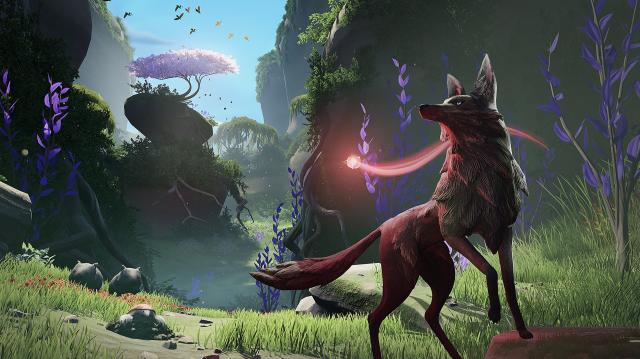 Thanks to the presentation, the gameplay becomes more engaging. Lost Ember revolves around giving your wolf the ability to transfer your spirit into any other creature and control them. Roll through caves as a wombat, soar through the air as a bird, climb over snowy peaks like a mountain goat, or swim with the currents as a fish. These are just some of the animals you need to control in order to make progress. In addition, most of these animals have extra silly things you can do while you embody them that have nothing to do with continuing the game. Although not necessary, these additions help set the animals apart.

Due to all this, the gameplay really changes based on what you control, adding a lot of variety. By default you move around with your wolf with the left stick. However, birds need you to tap the X button on the Dualshock 4 to flap their wings while L2 and R2 get them to soar or dive. Certain animals let you charge to break barriers while others - like moles - allow you to dig and travel under dirt. A nice touch is how the camera changes your perspective and scale based on what animal you're using, making you feel larger or smaller based on what you control. 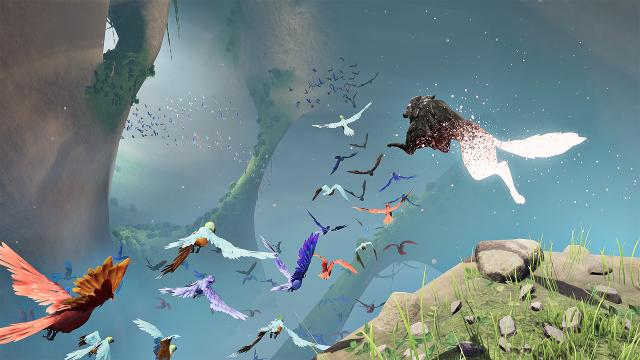 Despite what animal you use, though, Lost Ember is not at all a difficult game. As such, it's very accessible with little challenge and best enjoyed as a relaxing experience. There are some parts that require you to think a bit to leverage the different abilities of animals, and others that require you to complete quick time events, but even these are straightforward. You can fall from high elevations, but the game just instantly teleports you back to safety. The game itself is very linear too and it's almost impossible to get lost. Completionists can grab all the collectibles in the form of mushrooms, relics, and Legendary Animals hidden throughout the world but these aren't very worthwhile.

Like Journey, Lost Ember is best when it lets players take their time to explore and soak in the beauty and simplicity of the world Mooneye Studios has built. Narratively, it is well done albeit predictable. The presentation is also generally strong, despite stuttering and hollow voice acting. Finally - even though short and unchallenging - the gameplay encourages exploration and provides a lot of variety, with plenty of replayability for those motivated to collect items. Through all this, it's very apparent that Lost Ember is a labour of love; one that forgoes any sort of depth and complexity in gameplay for the sake of beautiful presentation and an interesting story.

This review is based on a digital copy of Lost Ember for the PC, provided by the publisher.