Become a card-carrying member of the Monster Slayers Guild.

In a Venn diagram with circles representing deck-building, rogue-lite, and role-playing games, Monster Slayers would occupy the shared space among all three. If that sounds super specific, it is. Yet, there are mechanics and features at play in the title to satisfy—at least partially—fans of rogue-lite randomness, Hearthstone-esque card collecting, and class-based dungeon diving. It's overall a solid title that's held back by some tedious gameplay and a few technical difficulties.

The story in Monster Slayers is modest. A would-be hero joins the Monster Slayers Guild and travels to the monster-infested Northern Valley to earn fame and riches. The goal: defeat the legendary Harbinger and become a true Monster Slayer. This is a fine pretext for some deck-building and dungeon-spelunking action, but it's a bit undercooked. A little more context on the Guild, the Harbinger, and the landmarks of the Northern Valley would fill in some narrative gaps, and make the repeat visits more appetizing. 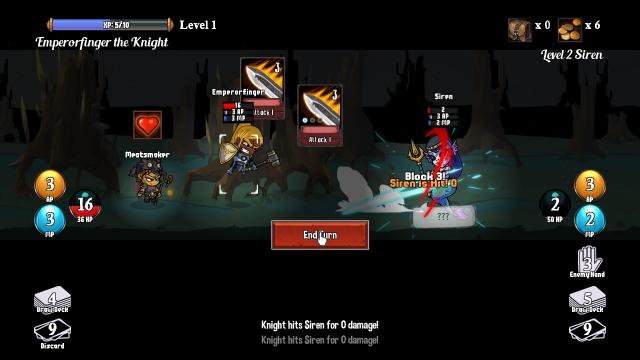 Repeat visits are the name of the game, as RNG cards and rogue-lite unpredictability will carry your disposable hero to his or her grave much more often than to victory. This is how it works: you'll choose your class (eight are unlocked at the beginning of the game), craft a custom hero, and embark on your journey into the Northern Valley with a basic set of attack, magic, and support cards. Using those cards and any items and upgrades you find along the way, you'll fight vampires, trolls, and other monsters in turn-based encounters across three randomly-generated dungeons. If you fail, your character is gone for good, but the non-card items you won carry over, as does reputation—earned for beating enemies and dungeons and used to purchase permanent perks.

So, Monster Slayers punishes you for failure but rewards you for getting close to victory. Every death brings with it more reputation points that, for example, raise the amount of health points earned upon each level up, or increase the likelihood that a downed enemy will bestow a unique item. In other words, you don't have to start from scratch. It makes defeat much more palatable, and inspires you to create a brand new slayer and start again immediately; this is the sort of game that you can play for hours straight without realizing it. That's the good part. The bad part is that even with its "just one more" formula, the game can turn tedious. 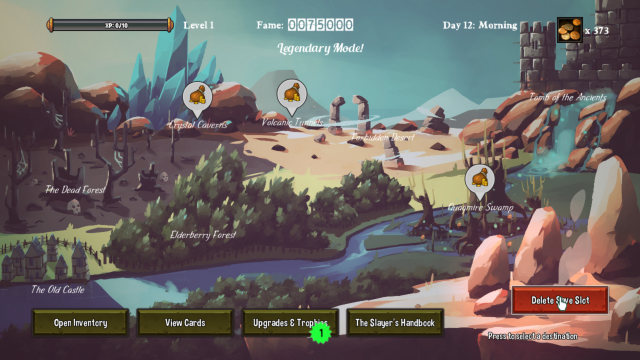 Essentially, Monster Slayers finds a paradoxical gameplay loop that's simultaneously addictive and aggravating. You'll have to build your decks from square one and fight through low-level enemies again and again. While random dungeon layouts and RNG loot make each run unique, grinding for permanent features like weapons, armor, and reputation points can turn tiresome. The three-dungeon structure works against the game as well. At first you'll escape from the first dungeon and die in the second. Then, as you realize what card combinations and strategies work best, you'll begin to dominate dungeon two and fall in dungeon three. Towards the end, you'll build a deck made to survive the third and final dungeon, which makes playing through the first two something of a boring formality.

Even with a repetitive structure, Monster Slayers succeeds because of its card-based curation and combat. Collecting, upgrading, and sometimes deleting cards is engaging, and deploying the right combination of complementary cards under duress often thrilling. With 14 different classes—eight unlocked off the bat—helpful NPCs who offer card upgrades, companions who provide buffs and debuffs, and shops that sell powerful cards for a price, there are many different strategies to test in the heat of battle.

If you manage to beat the Harbinger (not an easy task), you'll find the option to take your game-winning hero and deck into Survival Mode, where you'll be tested against endless waves of monsters. You'll also earn the option to try the game in Legendary Mode, a difficult mode with several handicaps, including more powerful enemy decks and the negation of any HP boosts tied to armor and accessories. Finally, there are trophies to unlock, e.g., "have a hero with at least 200 HP".

On the technical front, Monster Slayers is uneven. The user interface was clearly designed with the PC in mind—moving equipment and clicking tabs with an analog stick is more laborious than usual—and there's a curious glitch that will send you back to the beginning of the third dungeon after you've died, returned to the main menu, and restarted the game. This can even happen when you've beaten the game, finished survival mode, and restarted. Thankfully, the game recognizes you toppled the Harbinger despite this time-traveling bug. There is also some framerate slowdown, but this is rare. 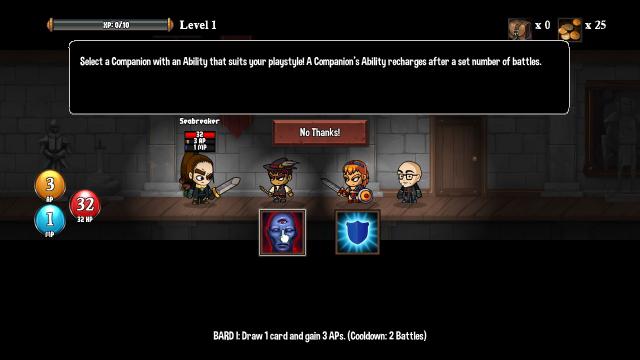 Graphically, Monster Slayers is acceptable. Its simple backgrounds and cartoon characters are unremarkable, but its battle animations and special effects are nifty—there's something deeply satisfying about the way a monster will rise in the air, fall in slow motion, and land with a thud when defeated. While there aren't many musical riffs in the game, those that do appear match the high-stakes energy of the game very well.

If you're at all interested in rogue-lite and/or card-building games, check out Monster Slayers. It manages the priorities and expectations of each genre well, and wraps them both in a dungeon-crawling role-player framework. There are a couple of technical hitches and some boring repetition, but also a plethora of character and card options and some addictive tactical gameplay. Show a lot of patience and the game will find a way to reward you.

This review is based on a digital copy of Monster Slayers for the NS, provided by the publisher.