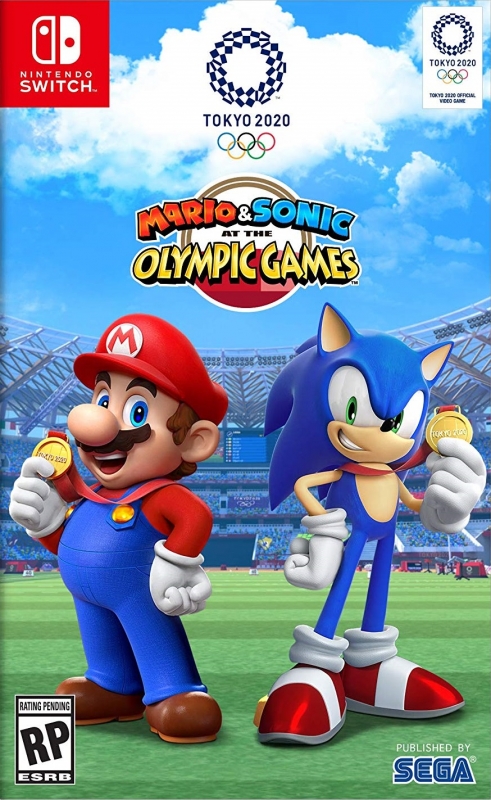 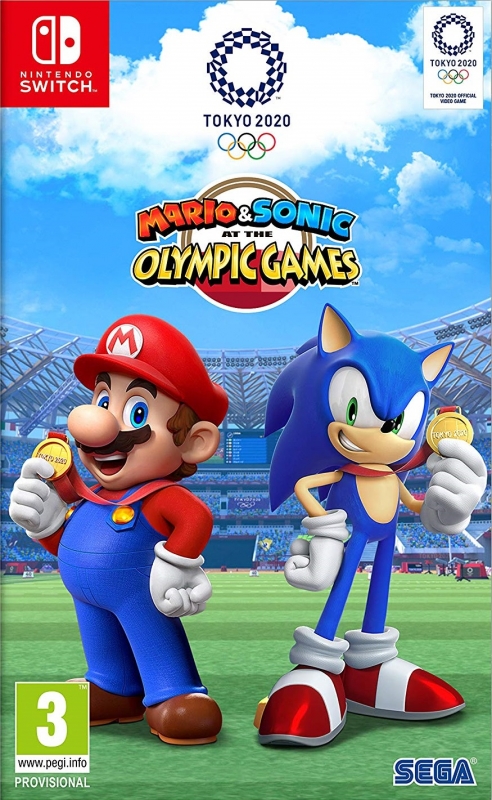 Mario & Sonic at the Tokyo Olympics

The sense of camaraderie and international sportsmanship in Mario & Sonic at the Olympic Games Tokyo 2020 is infectious. By the time the credits roll on its story mode, you'll be in front of your computer looking up plane ticket prices to Japan to catch a glimpse of the real Olympic games next summer. The game oozes reverence for the Olympics, pride in Tokyo for hosting them in 2020 and previously in 1964—the Japanese capital is one of only five cities to have hosted twice—and nostalgia for the Super Mario and Sonic properties, which produce its roster of playable characters. It's a love letter to Tokyo, to competitive sports, to SEGA, and to Nintendo, buttressed with a clever time-traveling campaign, over 30 events, and several different control and multiplayer options.

So often in a sports game, a single-player campaign can be an afterthought. While Story Mode in Mario & Sonic Tokyo 2020 isn't incredible, it does provide several hours of enjoyment with lots of fan service and a neat plotline that leverages a large roster of beloved mascots and Tokyo's Olympic history. Set during the XXXII Olympic Summer Games, the story finds villains Bowser and Dr. Eggman hatching a scheme to trap their respective enemies—Mario and Sonic—in a custom video game console, the Tokyo '64. Something goes wrong, and the system sucks in all four characters (plus Toad). They soon find themselves confined in a pixelated version of Tokyo during the 1964 Olympics. As Mario and Sonic endeavor to escape back to reality, Luigi and Tails work in 2020 to rescue them. 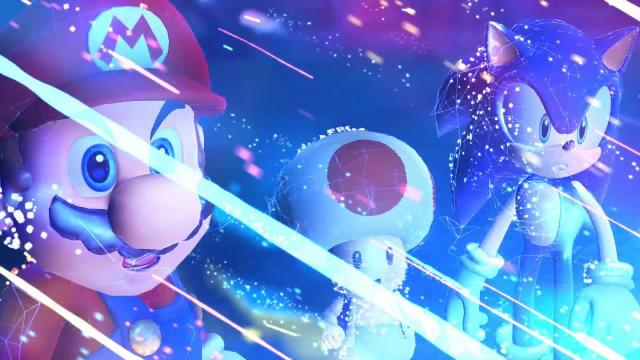 With this narrative in the background, players will participate in sporting events in both 1964 and 2020. Story mode can be contrived at times—the game thinks of every excuse for Luigi and Tails to participate in games while their friends are in mortal danger—and its map exploration is perfunctory at best, but overall there's enough connective tissue to make it more than a loose collection of mini-games strung together. There are several guest characters, lots of collectible trivia, and some funny interactions between old rivals. When Bowser Jr. sees his dad featured in a non-licensed video game—without realizing the gravity of the situation—he yells "It's rights infringement! He's gonna get Koopa Troop Legal and bring the thunder!"

Perhaps the best part of story mode is a collection of 10 unique events unconnected to any Olympic exercise. These include Tower Climb, where Tails scales the facade of Tokyo Tower, and Bullet Train Blast, where 16-bit Sonic chases Dr. Eggman's train in a side-scrolling jaunt that's more Sonic the Hedgehog than Olympics. Once beaten each event goes into the Game Room, accessible from "My Data", where you can play it as many times as you wish. 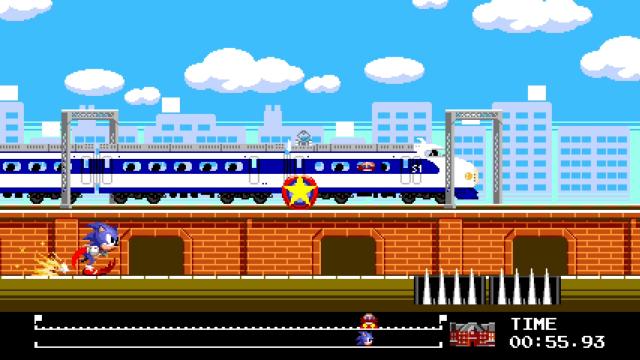 You'll need to play these special events to unlock them, but from the first time you boot up Mario & Sonic Tokyo 2020 you'll have access to the game's 34 Olympic events: 10 retro-styled 2D events; 21 3D events; and three "Dream" events, which are fantastical versions of traditional Olympic contests. It's a robust, mechanically-diverse assortment of games that should keep players busy for a while. Standouts include surfing, gymnastics, and archery in 2020 and 10m platform and marathon in 1964. Marathon in particular is interesting because it's a long, strategic experience in a sea of short reflex-based events.

The Dream events deserve special mention here. These are three fun, out-there versions of racing, shooting, and karate. Dream Racing combines skateboarding and F-Zero, dream shooting—the best of the bunch—is like a discount Splatoon, and Dream Karate is more WWE than IOC-sanctioned sport. 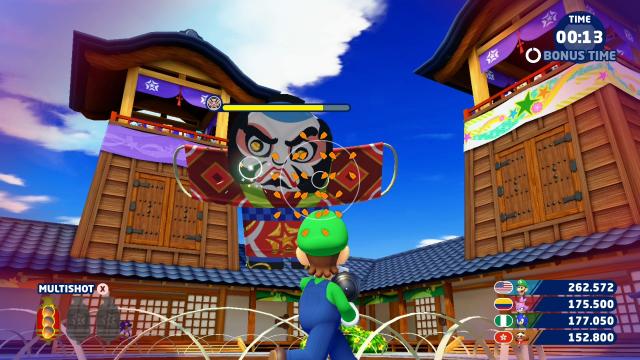 Not only does Mario and Sonic Tokyo 2020 provide many sporting events, it also allows you to experience them in several different ways. You can participate in a quick match solo or with up to four players, connect with other Switch consoles via wireless communication, or take your skills online and play with people from around the world. Online play allows for ranked matches, friends-only rooms, and online leaderboards.

The game also provides several different control schemes. After you select your event, you'll typically have three available play styles: dual controllers, solo remote, and buttons only. Dual controllers and solo remote take advantage of Joy-Con motion controls while buttons only is a more straightforward analog experience. Motion controls don't appear to add much to the package—this game won't make you forget Wii Sports Resort—but it's nice to have options.

Speaking of options, it would have been nice to see more settings for individual events, particularly team-based games like rugby sevens and football. As of now, you only have limited CPU difficulty and time options. 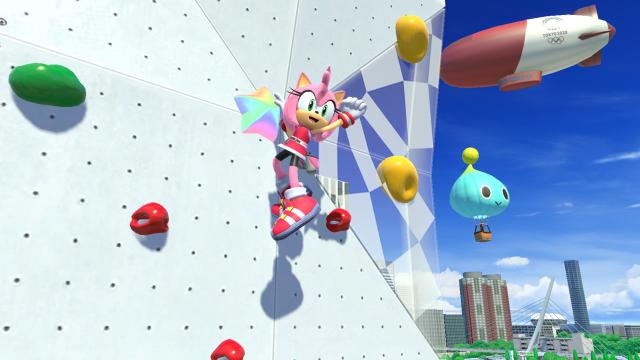 Mario and Sonic Tokyo 2020 isn't going to light the world on fire visually, but its crisp, clean, and bright graphics work ideally with a game about teamwork and international optimism. The 8- and 16-bit graphics featured in the 1964 alternate universe are also successful and hit all the right nostalgic notes. Along with synthesized chiptune music and a muffled announcer, you'd think the old-school events were torn from 1988 or 1990—armed with modern conveniences of course.

In the end, it's via those connections—to Tokyo in 1964 and to 80s and 90s era gaming—that Mario and Sonic Tokyo 2020 earns its keep. What could have been your standard sports mini-game collection is elevated by a nostalgic storyline and unique events that riff on the 2D platforming origins of Super Mario and Sonic the Hedgehog. Story mode could have been deeper and more interactive and individual games could use a few more customization options, but in general this is a lively, sentimental, and inspirational way to experience the Olympic Games without buying that plane ticket to Tokyo.

This review is based on a digital copy of Mario & Sonic at the Olympic Games Tokyo 2020 for the NS, provided by the publisher.