CrossCode is a fascinating cocktail of action-role playing, Zelda-like dungeon-diving, and massively-multiplayer gaming that ranks among the best titles of 2020. A console port of the PC original, it delivers an exceptional battle system, a poignant story, extraordinary art and music, and an outstanding collection of meaningful, rewarding quests. Around the three-quarters mark, the game starts to struggle with pacing and repetition, and there is some fussy platforming throughout, but in general anyone with an interest in titles like Secret of Mana, A Link to the Past, and World of Warcraft should give CrossCode the most serious attention. 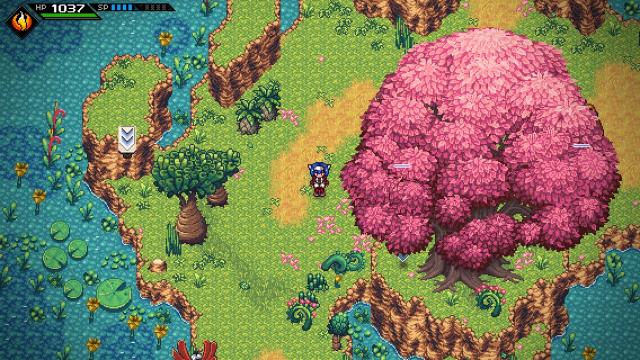 The setting of CrossCode, in the simplest terms, is a game-within-a-game. It's the distant future and humanity has discovered a far-off moon called Shadoon. In order to safely explore the moon and unlock the secrets of its ancient inhabitants, the company Instatainment has gamified — for lack of a better word — the moon, layering over Shadoon the MMORPG CrossWorlds, a unique mixture of virtual reality and an actual physical environment. Human players can experience CrossWorlds from the comfort of their home while their avatars, composed of "instant matter", physically inhabit the moon and run through the "Track of the Ancients", a series of physical and mental challenges left behind by the god-like beings of Shadoon.

It's a provocative premise that underpins both a clever science-fiction story and the more personal journey of the game's heroine Lea, brought into CrossWorlds under suspicious circumstances. It's also full of meta-textual commentary about how we absorb in video game media. In general, the scribes at developer Radical Fish Games have done outstanding work with the narrative in CrossCode. They've brought the fictional landscape of CrossWorlds to life, thanks to a rich, believable mythology; they've provided an emotional investment, due to a cast of sympathetic, relatable characters; and they've challenged players to consider how they consume video game content. 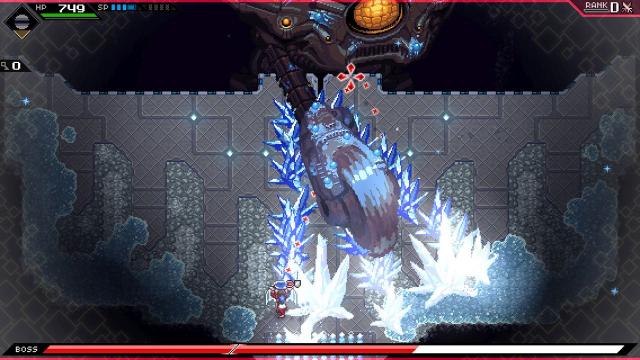 Although everything CrossCode offers is outstanding, combat is perhaps its best, most versatile feature. As Lea, players can deploy several different projectile, melee, or dash attacks, or play defense with block and dodge moves. As you delve deeper into the game and unlock elemental powers, the combat system reveals its true complexity. Eventually you'll find yourself able to switch among heat, cold, shock, and wave attacks, each with their own perks, combat arts, and upgrade paths. Using these elemental tools to identify and exploit enemy weaknesses is a joy.

Not only does the combat framework in CrossCode allow lots of flexibility and plenty of visceral thrills, it also rewards you for your performance. During the action, the game displays your combat rank in the upper right corner. Destroy enough enemies in quick succession without falling and you'll rise from D to C all the way to S, and earn correspondingly rare loot. 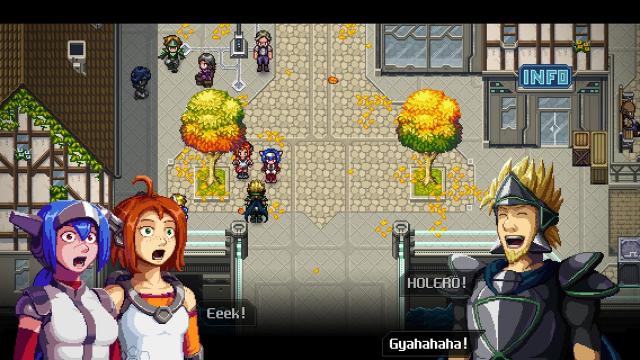 Outside of combat, you'll spend much of your time in the open areas of the Track tackling side-quests or hunting for treasure chests. Proposed by guild members and other players, the quests in CrossCode are routinely great, offering worthwhile rewards and interesting objectives that go far beyond simple fetch quests. There are two especially engaging quests that Radical Fish Games has threaded throughout the entire adventure. Pro tip: keep an eye out for a stranger wearing pieces of armor from every available class in CrossWorlds.

Treasure hunting, while enjoyable, is somewhat less successful. Each biome is littered with a dozen or more chests containing materials, gear, or consumables, typically on a hard-to-reach platform or trapped behind an impassable wall. Especially in the last third of the game, finding the route to these chests can prove tedious, in part because the answer relies on a convoluted series of pathways and triggers and in part due to finicky platforming. Top-down platforming in CrossCode is a bit fussy in general. It's often tricky to discern your elevation or the correct jumping distance between platforms. 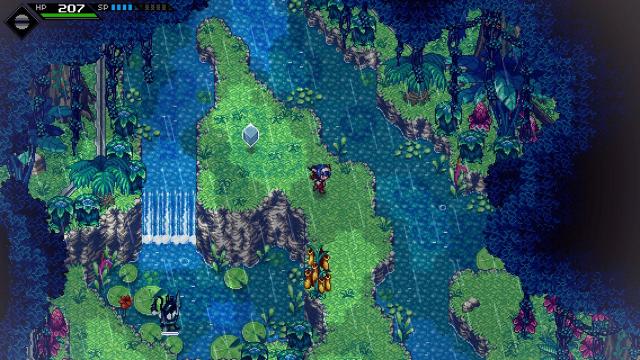 No matter what you do while walking them, all roads in Shadoon eventually lead to a dungeon. Inside you'll find enemy encounters, more hidden chests, and lots and lots of puzzles. Your feelings toward Zelda-like environmental puzzles will dictate how much you enjoy dungeons in CrossCode — maybe even how much you enjoy the game in general. Lea will brave room after room of diabolical puzzles in each of the game's dungeons, using her elemental gifts and good old-fashioned geometry to push forward. Credit goes to Radical Fish Games for dreaming up some incredibly clever and dastardly puzzles. Miyamoto and Aonuma would be proud.

Regrettably, in chapter eight, Radical Fish goes a bit overboard, throwing at the player three dungeons in a row. Whereas early in the game, players would cross a large stretch of land leisurely before reaching a climactic dungeon, in Gaia's Garden players must topple a trio of dungeons back to back to back. It's exhausting. 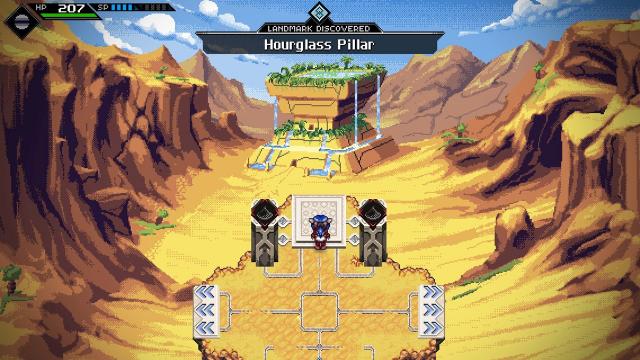 In general, CrossCode experiences a pacing problem in its final few acts. The game grinds to a halt in chapter seven, which introduces some important narrative information but loses much of the game's early momentum, and never fully recovers. CrossCode is a great game throughout, but for its first six chapters it's a brilliant one.

Ultimately, CrossCode is simply too much of a good thing. Its dungeons and puzzle rooms are inspired, but as they appear with greater frequency and complexity in the end game, they tend to wear you down. Even the folks at Radical Fish seem to acknowledge this. In the last puzzle room before the final boss battle, an NPC surveys the layout and says "you cannot be serious..."

With all its dungeons, quests, and secrets, CrossCode is a mammoth game. You could log 60+ hours and still find things to do, whether that means returning to old areas to fight higher-level enemies and gain gems or trying your luck in the Rhombus Square arena, unlocked after you "beat" the game. There are also two possible endings, so you may need to invest additional time to see the "good" ending. 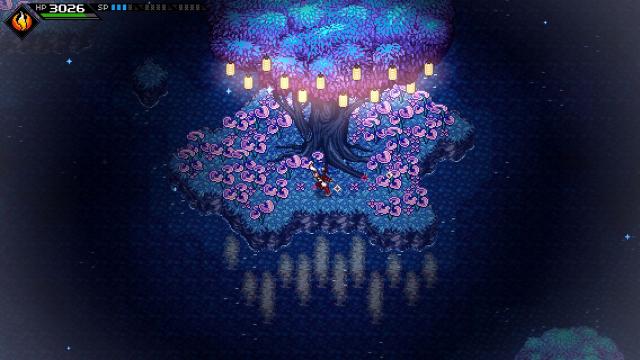 In terms of art and music, CrossCode is extraordinary. The game's pixel art, character portraits, and special effects look amazing, and the soundtrack by Deniz Akbulut is eclectic, catchy, and diverse. Technical performance is steady minus a few framerate drops. The Switch version of the game had previously suffered from a menu delay and a nasty bug in the botany menu that crashed the game, but a patch delivered at the end of July fixed both issues.

CrossCode is one of the best games of the year and one of the better indie games of the generation. Its RPG systems, combat framework, side-quests, puzzles, narrative, graphics, and music are all excellent, and it delivers dozens of hours worth of entertaining content. It experiences some uneven pacing and repetitive gameplay in its final few chapters and doesn't fully deliver on the promise of its masterful first half, but it remains throughout a must-play action-RPG.

This review is based on a digital copy of CrossCode for the NS, provided by the publisher.