Considering Battle Royale-style games are all the rage these days, it would perhaps make sense that a more strategic title tailor made for this type of multiplayer frenzy would inevitably follow. Enter Blast Zone! Tournament, the sequel to the free-to-play Bomb Buddies. This game, like its predecessor, bears many of the hallmarks of the classic Bomberman, but while it boasts tons of content and an exciting BR mode, it still feels like a poor imitation.

It doesn’t bode too well that the game, which is quite similar to its free-to-play predecessor, comes at the rather steep asking price of $19.99. Aside from its wildly fun and chaotic 32 player Battle Royale, it doesn’t do much to blast through the boundaries. The result is a pretty tepid experience that lacks both ingenuity and soul. 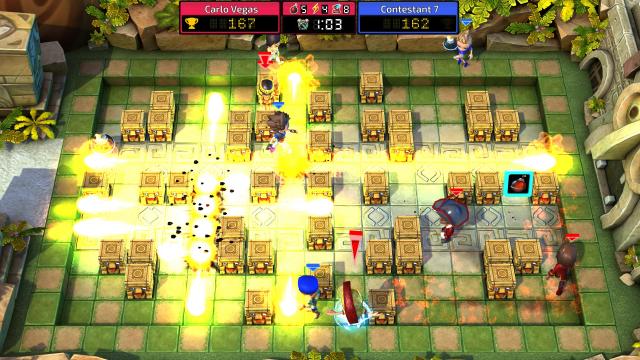 Blast Zone! Tournament features a sort of cheap, Saturday morning 3D animated aesthetic with avatars that appear to be ripped straight from Xbox Live designs. There is, at least, a diverse and colorful palette of environments - from a vibrant jungle, to a dark, gritty industrial biome, to a psychedelic disco dance floor. The latter is particularly amusing, since the obstacles which you must blast away oddly consist of what appear to be large Martinis. Unlike the gameplay itself, most of these areas tend to stray from trope territory with their colorful, imaginative atmospheres.

The campaign, on the other hand, feels a degree more lifeless and uninspired overall. It’s a shame, because there is a ton of content to be had here; dozens of stages that reside over the handful of aforementioned biomes. Unfortunately it tends to feel like a drawn-out tutorial at times, as you’re often shown new types of enemies, and occasionally new power-ups/abilities. While Blast Zone! Tournament does a decent job of varying things up, it still tends to feel stale rather quickly. This type of game clearly thrives when palling around with actual humans, rather than going solo against the game’s AI, which proves ridiculously tough to deal with more often than not.

Anyone who’s even dabbled in Bomberman knows the drill here - the goal is to scurry through various grids sprinkled with destructible obstacles and items, and take out your opponents by either catching them off-guard or trapping them with your bombs. Though this manages to be a fun endeavor when playing against real people, the AI is just too good. They execute flawlessly; bobbing and weaving their way out of trouble, and escaping chaotic, trap-laden scenarios that only the most caffeinated human could avoid. This makes multiplayer against these bots - and the campaign stages vs AI players - an endlessly frustrating ordeal. Basically, you need to either trap an AI foe to take them out, or just spam a bunch of bombs and hope for the rare instance they’ll stumble into the explosive path you’ve left. 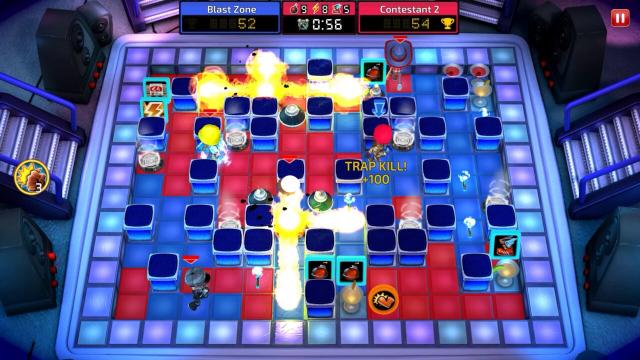 The stages are often rife with powerups that are obtained by blowing up objects in your path. These can certainly help you overcome those pesky bots - though in my experience they played just as great a role in causing me to kill myself accidentally. Like Bomberman, you can get boosts in bomb power, increase the number of bombs you can drop (useful for trapping foes), and increase your running speed. You can also nab occasional limited-use powers like the ability to kick and toss bombs at unsuspecting prey, stunning them for a bit. These are satisfying feats when pulled off correctly, but they can be tricky to wrap your head around, especially when contrasted with the otherwise simplistic controls.

The solo mode does have an array of other objectives and gameplay modes to give you a break from dealing with ridiculous bot opponents, at least. For instance, some stages will have you bust your way through obstacles and scramble to an endpoint on the map within a time limit. Others force you to defeat a variety of pre-programmed baddies, like mechanical bees that chase you down, and robots that follow the same paths. The cruel irony is that, while these stages are usually easier to get through, they’re also significantly duller. So although the single player mode can keep you busy for hours on end, the question is, will you really want to go through this drudgery? It’s unlikely, unless you care that much about the xp you’re given, which can be put towards pointless aesthetic accessories to dress up your avatar. 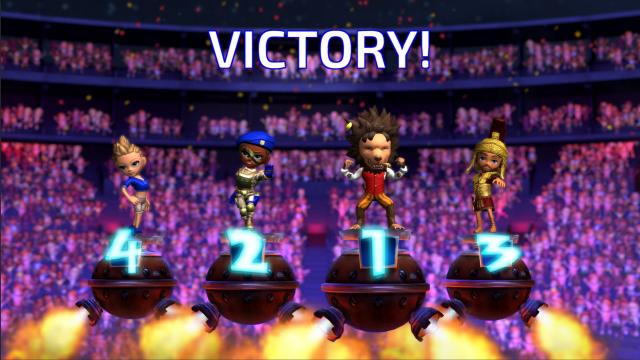 Still, in all fairness, this game was clearly designed around the premise of multiplayer, and it does partly excel on this front. Hooking up with friends and battling for Blast Zone! supremacy proved to be an exciting and amusing endeavor. There's also the online mode, which is where the bulk of the enjoyment lies. Though, while the local multiplayer has a wealth of options - including a coin collecting mode and the ever-amusing “Zombie Mode” - the online component boils things down to a few modes. These include team deathmatch, in which teammates can “tag back in” upon getting killed and taking out an opponent from the sidelines, as well as free-for-all, where you’re able to re-spawn and battle for the highest score.

The highlight of the online multiplayer - and, indeed, of Blast Zone! Tournament as a whole - is the insane 32 player Battle Royale. While the whirlwind of chaos surrounding you can make it tough to find your footing, or even locate your little avatar on a small computer monitor, it’s great maniacal fun once you get settled. After a certain time, the map begins to close in, in a clever move to force the issue and eliminate players at a more rapid pace. The online BR mode is really the sole component that makes this Bomberman knock-off stand out. 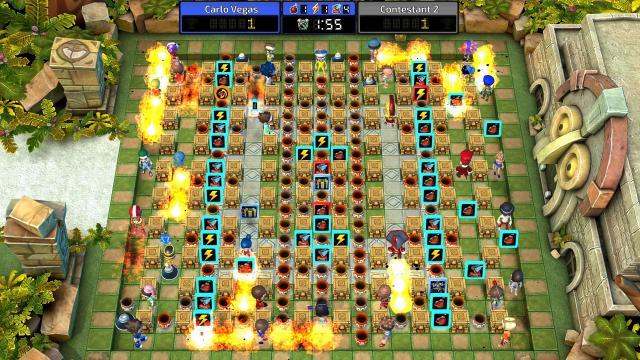 It’s just too bad how rare it is to stumble upon an online match that contains real players. Since the game’s lobbies were essentially a ghost town in my experience, most of the online games consisted of squaring off against the same overpowered AI exhibition style. This usually just resulted in annoying losses and a constant deduction of rank points. I suppose it’s no fault of the game itself that its servers are nearly empty, and I could see this being an excellent online experience, but I can only critique what I was able to access.

It’s a bummer, because Blast Zone! Tournament holds some potential with its solid, easy to handle game mechanics, and a healthy amount of content. It adheres to the Bomberman formula quite well, and contains a plethora of multiplayer game modes to enjoy, along with some amusing environments. Yet the sparsely populated lobbies, robotically precise AI, and stagnant, repetitive gameplay in the campaign hold this back from being a Bomberman killer or BR phenomenon. This is a title that only diehard fans of that classic multiplayer series and/or BR enthusiasts should really bother with, especially given its relatively steep price.

This review is based on a digital copy of Blast Zone! Tournament for the PC, provided by the publisher.