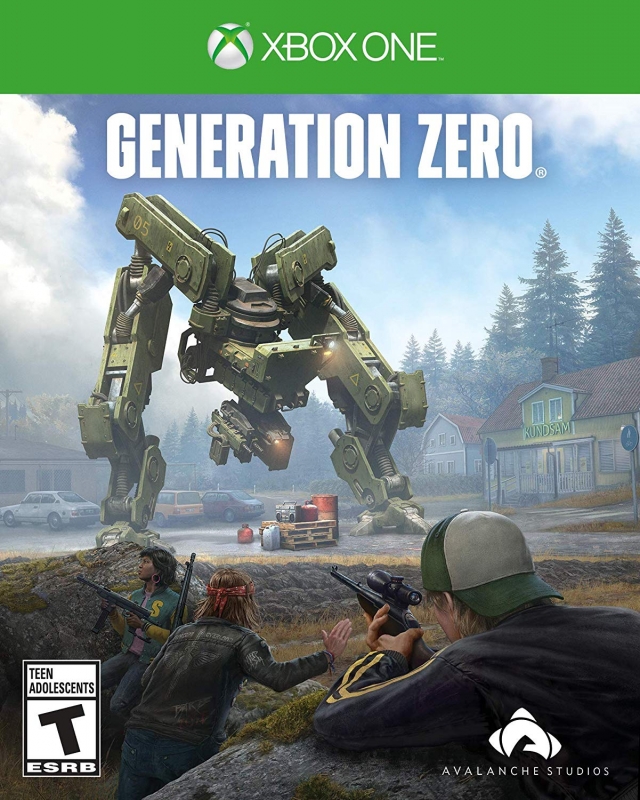 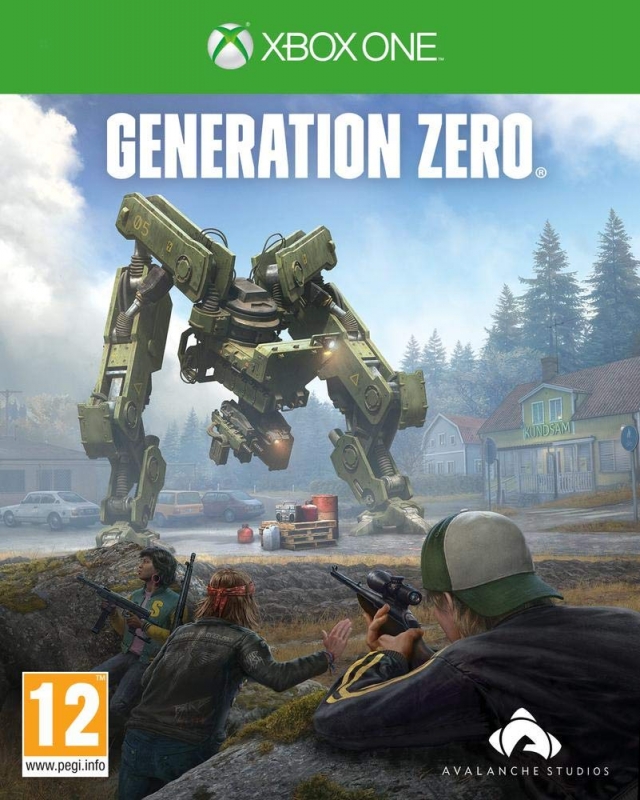 If only Generation Zero was as spectacular as its theme song. Part "The Terminator Theme", part "Stranger Things", it's a perfect distillation of the 80s soundscape—and an ideal accent for a game that celebrates all things 1980s. Regrettably, this song is the first and last great thing about the game. Despite its synthesizer sensibilities, Generation Zero suffers from a host of structural and technical problems. There are some good mechanics at play, but in general this open-world first-person shooter feels like a grab bag of underdeveloped ideas and half-finished systems.

Generation Zero is set in an alternate reality Sweden, where the country emerged from WWII unscathed, but determined to prepare for any future hostile invasion. As a result the government erected bunkers and defensive installations across the nation, and trained its citizens to be guerrilla fighters from a young age. The game starts many years later, in 1989, and follows a group of vacationers who, upon boating back to the mainland, are blown out of the water. When they wash up on shore they find deserted homes and cars, and a solitary dog-like robot, fitted with a machine gun. From that point on the survivors explore a huge land mass, searching for clues about the mystery robotic infestation. 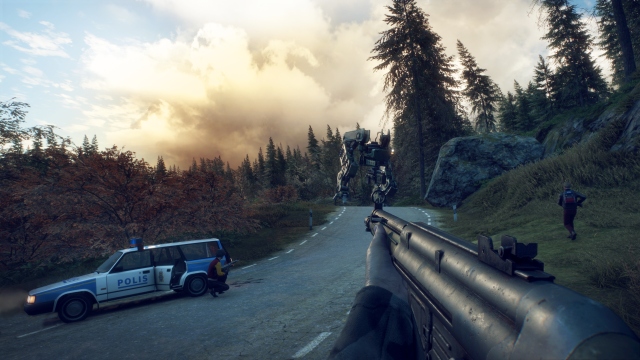 Story-telling and world-building are two of the highlights of the game. The setting and premise are unique, and the bread crumb trail of clues that unravel the mystery are enticing enough to keep playing pushing forward, at least to a point. Developer Avalanche Studios lands on a nice mix of non-verbal, environmental hints—a burned-up car or a deserted bunker, to name a couple of examples—and more concrete clues like answering machine messages, maps, and newspaper clippings. You will find yourself wanting to know what happened.

You might not make it to the end of the game, however, as the surprising, unpredictable gameplay from the start of the game turns repetitive and frustrating a few hours in. There are a couple of aggravating features that work against Generation Zero here: a huge, relatively empty game world and recycled assets. 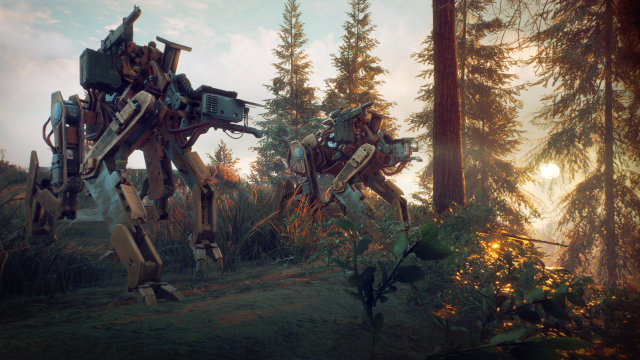 Take a quick look at the map in Generation Zero and you'll be immediately overwhelmed. The amount of real estate is staggering. The problem, as with many open-world games, is the stuff inside this map. It's a mostly empty world, packed with far-flung towns, bunkers, and outposts with reused templates. Basically, if you've seen one Swedish home, you've seen them all. Asset flips are painfully obvious across each and every territory, and form a constant reminder that, yes, you're in a video game. The huge distances between landmarks are even more frustrating. You will spend many hours simply running from town to town, over lovely-but-vacant fields, forests, and mountains.

Although Avalanche makes missteps with the size, density, and diversity of its open world, it wisely empowers players to do things their own way within it. You're free to take main and side quests in any order, or seek out the nearest sign of civilization to look for weapons, ammo, and other supplies. Better yet, the developer refuses to hold your hand. The game will provide vague clues, but it's up to players' problem-solving skills to find the path forward. 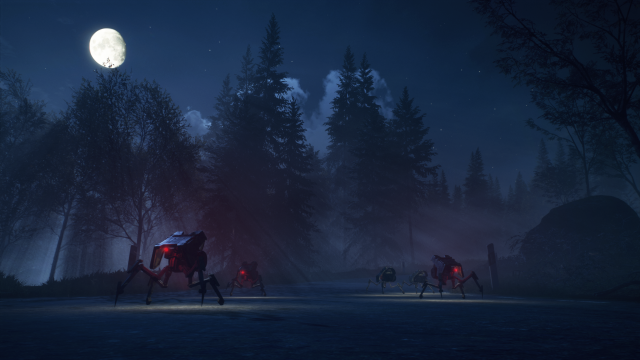 While Generation Zero is tough-but-fair in its quest delivery systems, it can be downright punishing in terms of combat scenarios. The game is manageable—even easy—in its introductory area, but as you travel further north new enemy types appear that deal devastating damage. Dog-like robots and mechanical ticks (think headcrabs from Half-Life) are joined by bipedal mechs and hulking harvesters that can end your life prematurely, especially when playing solo. The game's answer: stealth and guerrilla tactics. The first option isn't ideal, as the title's stealth awareness alerts are basic and unreliable, and stealth gameplay results in fewer experience points (XP is earned from winning/escaping combat). The second options is more realistic and more rewarding—it's exhilarating to lure a pack of robots next to a pressurized gas canister and then blow it up from a distance—but is dependent on the cooperation of the game's unpredictable AI.

Combat becomes much more approachable with a friend or three along for an online multiplayer experience, but even with friends the game embraces some backward design decisions. The first: world progress is saved only for the host. This means that online guests will need to rediscover and redo quests if they plan to host a game themselves at a later point. The second: every time an online guest populates in a host's game, he or she will begin at the very beginning of the game, not alongside the host. If that host is several kilometers away, and the guest hasn't already unlocked fast-travel points nearby, it's going to be a long walk. Thankfully, field radios act as portable fast travel points. Even with these weird restrictions, it's worth recruiting a team of two to four players to save Sweden; the game is simply not balanced for solo play. 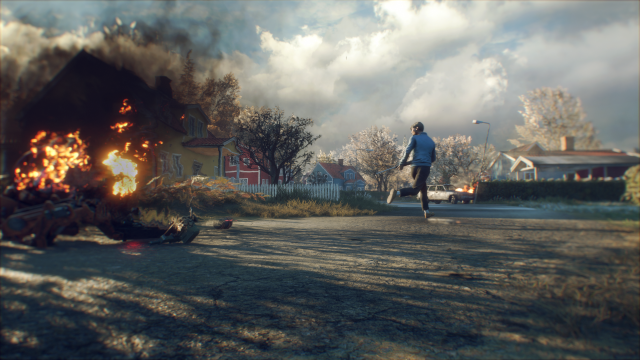 Generation Zero has some structural, mechanical, and general pacing issues, but on the artistic front it scores good marks. The wide range of colorful, pastoral environments in the game serve as relaxing interludes between firefights—it sometimes feels like a post-apocalyptic version of The Vanishing of Ethan Carter—and the sound effects and 80s musical riffs are stellar. In fact, all the 80s accoutrement are great. When you're snooping through derelict homes, cars, and bunkers, you'll often find apparel you can equip in the Profile tab. These include outfits, accessories, and head wear typical of the era. If you want to model your avatar after your favorite The Breakfast Club character, you're in luck.

Loot goes far beyond cosmetic items, however. Hidden in trucks, shipping containers, backpacks, and churches are flares, fireworks, bullets, health packs, radios (useful to lure robots nearby), grenades, adrenaline (which revives you upon death), guns, and collectibles. Like most activities in the game, searching out loot is engaging at first but tedious as the hours roll on. The joy of discovery dissipates after the 50th home ransacked. Moreover, managing items in the grid-based inventory is often irksome, as there isn't an easy way to swap or stack items; expect to drop a lot of materials on the ground while you make room for the latest, greatest thing. 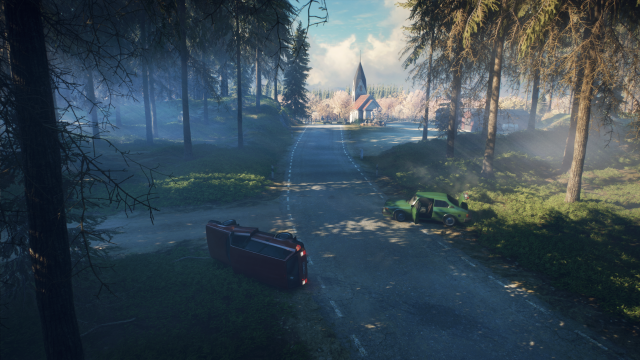 It wouldn't be a modern open-world game without some technical warts, and Generation Zero has more than its fair share. There are frequent flickering lighting glitches, alongside graphical bugs like floating terrain and literal cracks in the level geometry; there's a hill in Norra Saltholmen where you can see through down through the rock into the bunker within. Furthermore, when there is too much explosive action on screen, the framerate drops and screen tearing increases.

There are a lot of systems at work in Generation Zero—shooting, looting, guerrilla warfare, exploration, survival—but none feel fully-realized. The game's premise is rich in potential, and for a while it's fun to scavenge with a friend, yet repetitive gameplay, recycled assets, inconsistent AI, and technical flaws end up shackling the production. Avalanche's successes in world-building and player freedom are significant, but insufficient to turn this love song to 1980s Sweden into a hit.

This review is based on a digital copy of Generation Zero for the XOne, provided by the publisher.