A faithful reproduction of the board game.

Every Tuesday for the last five years or so a group of friends and I have sat down and played all manner of different board games. Often we'll try out a new game that catches our eyes; sometimes it ends up fascinating us and we'll play it over and over again, discovering its many different intricacies, while other times it'll simply end up being a dud that we never play again.

Evolution comfortably fits into the former camp and I was excited to get my hands on the digital recreation of the same game that I had played with friends many times over. To be able to play that game not just against the AI but also against friends (and others players) online sounded like a godsend to me now that I'm on the other side of the world from them. 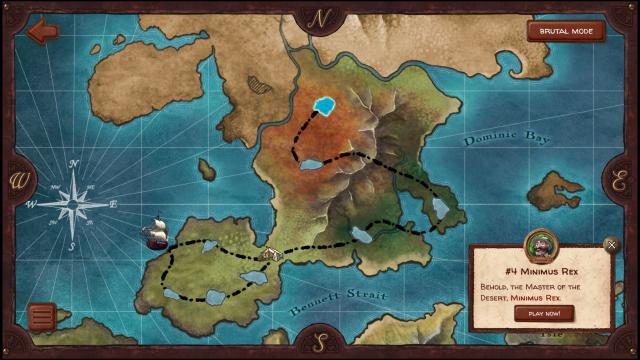 The rules of the game are simple. Each player is given a species to begin with, along with a number of cards, and is tasked with evolving it in a number of different ways, which in turn gives you victory points. Each card you're given at the start can be used towards a number of different activities, from supplying food, to watering a hole that all players can use, giving your creatures specific attributes, increasing its size, increasing your species' population, or even creating a whole new species.

With a simple set of ground rules to work around you then attempt to win the game, and this can be done in numerous different ways. For example, you might change your species so that it's carnivorous and can eat other players' creations, which allows you to steal their victory points as well as their ability to consume food, or you might create a massive herbivore species that can consume all of the available food before other players get to their turns. 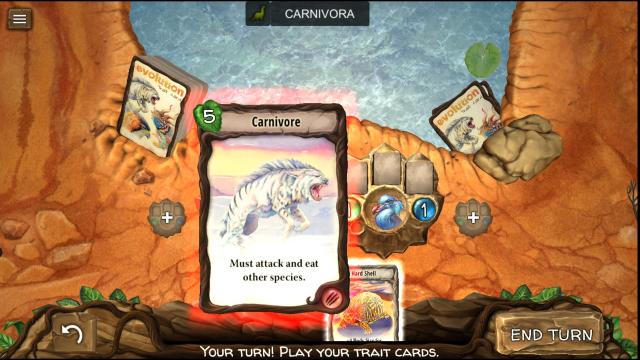 Evolution: The Video Game for Steam provides the same experience as the board game, albeit much more fast-paced thanks to the game automatically moving pieces for you. In addition to online competitive play, you can also play a campaign mode set around different AI species that all have different play styles. Some may be aggressive and only pursue the carnivorous route, pushing you to rally your own species' defences to ensure they can't harm you, while others are more passive, allowing you to get a feel for what each of the cards and their abilities do.

I found the campaign to be the most novel aspect of this video game version of the board game, as it allowed me to experiment and use combinations of attributes that I hadn't been able use when playing against friends, and it certainly provides a good campaign-come-tutorial experience for newcomers to the game. Unfortunately the announcer/narrator in the campaign soon starts to grate, however, and I found myself skipping a lot of the text that underpins the campaign's narrative in order to avoid it. 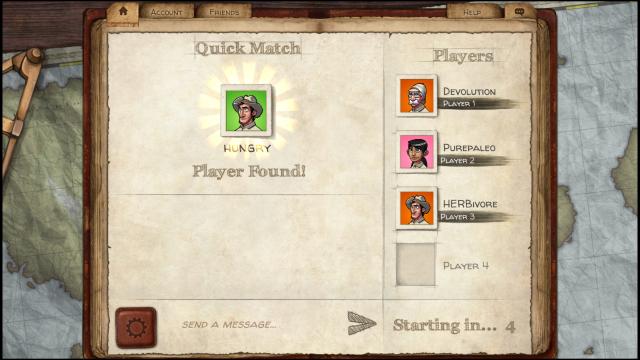 The online mode, which was the main attraction for me, is fairly barebones, but it allows you to take part in private games against friends on Steam or public games using the "find a match" feature. These games play out exactly as you'd expect, which is the main thing, and the online mode is fully functional, giving me a way to play Evolution with friends back home.

Evolution: The Video Game unfortunately does come with its drawbacks though, and for the most part these will be familiar to anyone who's played a video game conversion of one of their favourite board games. The campaign essentially serves as a fleshed out tutorial but has little utility beyond that, because the AIs become repetitive, predictable, and easily manipulated. The harder difficulty setting is also pretty cheap - it basically amounts to the AI focussing more on you and ignoring other opponents.

It's also unfortunate that the developers didn't change up the formula somewhat by adding video game exclusive cards to the game, or even video game specific features like mini-games based around specific abilities (such as a fruit gathering mini-game for herbivore cards). Doing so would have added some variety to the campaign. 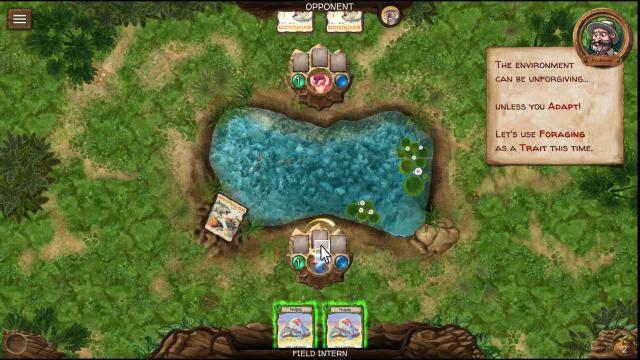 Evolution: The Video Game is an example of a board game to video game conversion done right; it's a faithful reproduction that will likely do wonders to further your grasp of the core game if you're already a fan of the board game version, just be warned that it's feature-light, both from a campaign and online perspective.

This review is based on a digital copy of Evolution: The Video Game for the PC, provided by the publisher.