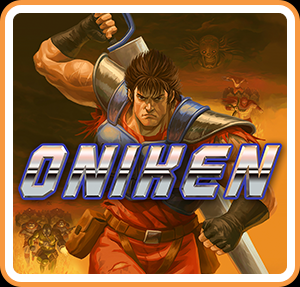 There are a lot of mediocre games on NES. For all its historical significance and for all its genuinely great software, Nintendo's industry-rattling home console hosted a bunch of middling content. Oniken: Unstoppable Edition, formerly a PC exclusive and now a Switch offering, feels like one of those middle-of-the road games; the kind you rented from your local video store as a kid, played for a night, then returned for something better. While its nostalgic beats are pitch perfect, and some of its stage designs intriguing, its sadistic level of difficulty and stiff controls—both holdovers from the third generation of video games—keep it down.

Oniken takes place in a post-apocalyptic future where a military organization called Oniken controls everything with an army of cybernetic soldiers. Fighting back against them is a small resistance movement, which recruits an unstoppable mercenary named Zaku to turn the tide of battle. With its 80s action archetypes—Zaku's support team looks pulled from Rambo and Aliens—cinematic 8-bit cut-scenes, and third-gen tropes, Oniken is a dream come true for fans who pine for the Reagan-era machismo of games like Ikari Warriors and Bad Dudes. 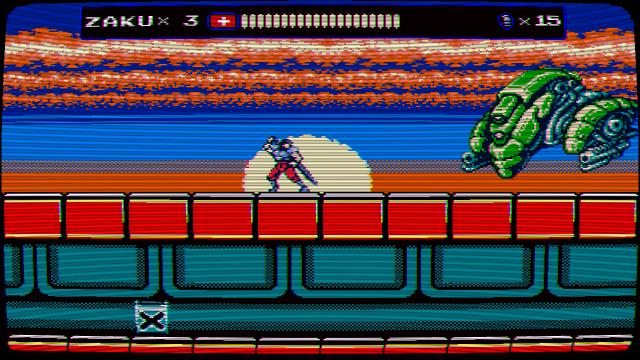 It's similarly attractive to folks who enjoy the 8-bit artistic stylings of titles like Contra and Ninja Gaiden. Developer JoyMasher has turned in a faithful, near-perfect recreation of the models, backgrounds, graphical flourishes, and sound effects of the games that helped define the arcade and home console gaming market in the 1980s. If you didn't know this game arrived in 2012, you'd think it debuted in 1986.

Oniken's similarities to famous 8-bit video games go beyond plot points and art direction, however. Mechanically, it plays similarly to games like Castlevania, Strider, and Vice: Project Doom, along with previously-mentioned titles Contra and Ninja Gaiden. It's a side-scrolling action-platformer with an overwhelming difficulty curve, focused on rote learning. The protagonist Zaku marches through six levels in total, each more inhospitable than the last, slicing and dicing mutants, robots, and giant boss creatures. 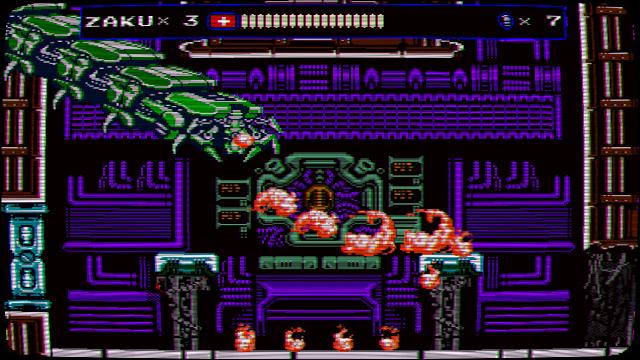 Oniken is a rather short game, but its unfair, unforgiving difficulty will prevent you from finishing it early—if you finish at all. Each stage contains numerous deadly gauntlets, plus one or two sub-bosses before the final boss showdown. If you lose your health at any juncture you'll return to the most recent checkpoint. Lose every life and it's back to the very beginning of the stage. Now, Oniken could be much crueler than it is. "Game over" could mean a full game restart, as opposed to an individual level restart. JoyMasher has at least built in a few safeguards to keep the players coming back for more punishment. Yet the jumping and fighting challenges are so great, and the margin for error so narrow, that even with mid- and post-level checkpoints, the game at times seems unwinnable.

Some awkward controls exacerbate this problem. Moving, ducking, jumping, and tossing grenades (up + X) never feel as smooth or responsive as possible. Strangely, neither the analog stick nor the d-pad on the Pro Controller does the trick. Heaving grenades is easier with the d-pad, but running and jumping actually performs better with the stick. Zaku's wooden, inflexible movements don't help. 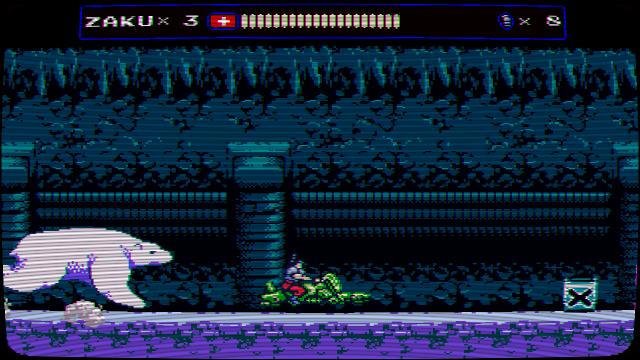 For its flaws, Oniken does feature more than a few interesting set-pieces and stage designs. One segment in chapter four finds Zaku riding on an Oniken supply train, while marauders (clearly inspired by Mad Max) attempt to take him down. In another episode, mid-way through chapter five, the merciless mercenary moves through a corridor that fills with a giant laser at regular intervals; Zaku must climb to safety to avoid its deadly beam. The best one of all is smack dab in the middle of chapter three: here, Zaku rides a hover bike away from a charging polar bear, flinging grenades backward as he steers.

If you're brave and skilled enough to beat all 18 bosses and six levels, you'll unlock a boss rush mode and—as if the base game wasn't enervating enough—Hardcore Mode, where Zaku has but a single life. You can also replay any beaten stage for higher scores, although this is akin to a post-traumatic soldier returning to the battlefield. 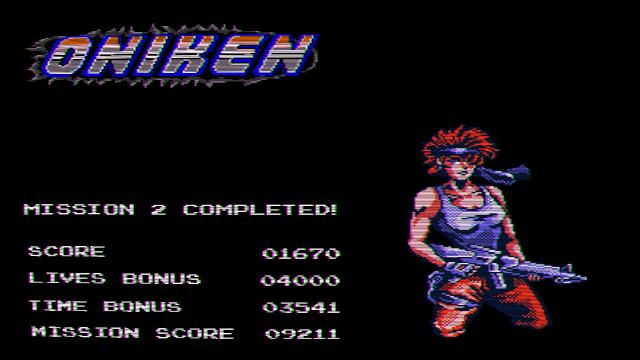 Oniken is a child of the 1980s, born in the 2010s. It's built by and for people who relish the golden age of arcade action, 8-bit graphics and sound, and 80s action movie tropes. For fans who treasure old-school action-platformers like Contra and Ninja Gaiden, it may be something worth buying. For modern gamers used to smoother controls, greater accessibility, and fancier assets, it's a non-starter. It looks and plays the part, which is admirable, but it embraces mechanics and gameplay loops that stymied players 35 years ago. Ultimately, Oniken is a faithful reproduction of something that wasn't very good to begin with.

This review is based on a digital copy of Oniken: Unstoppable Edition for the NS, provided by the publisher.