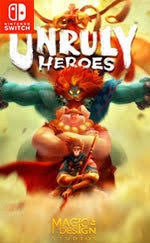 Unruly Heroes is the merger of Rayman Legends and Trine, by way of the Ming Dynasty. It's a clever, challenging, jaw-droppingly beautiful platformer with four implausible heroes, each with his own specific skill set. Played solo or with up to four people in local co-op, the game is great fun, especially when developer Magic Design Studios surprises with some unanticipated mechanic or level design quirk. A handful of platforming challenges can be fussy, and some of the combat sequences are unduly difficult—leading to more than a few restarts—but in general Unruly Heroes is a handsome, creative, and satisfying action-platformer.

Based loosely on the Ming Dynasty novel Journey to the West, Unruly Heroes follows four unlikely protagonists: Sanzang the wise, Wukong the fearless monkey, Kihong the greedy pig, and Sandmonk the sensitive brute. When the Sacred Scroll that maintains harmony in the world is torn up and scattered, the foursome unites to travel westward across several fantastical environments to collect the missing pieces. 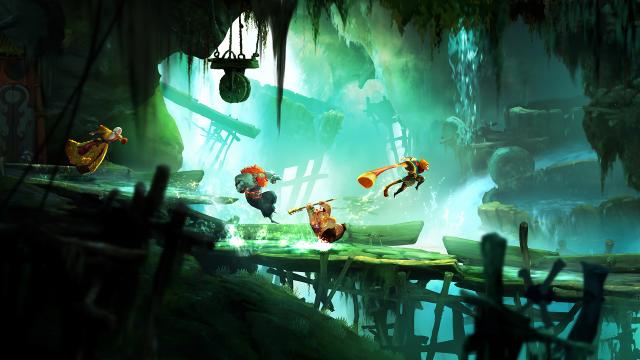 The central plotline works for the most part. Much of the game's mythology is absorbed through osmosis as the mismatched characters move through temples, snowy peaks, torched landscapes, and even the underworld (which has a bureacracy worthy of the DMV). Still, a little more background information would be helpful. Unruly Heroes can't seem to decide if it wants to go all in, narratively, on its heroes, villains, and westward journey, or simply use the Chinese mythological premise as a vehicle for platforming action. The result is a fun, but generally context-less adventure.

Unruly Heroes is a rather capricious game, in terms of its mechanics. Although it falls neatly into the action-platformer bucket, it's rarely content to linger on any one level design or platforming conceit. Magic Design Studios introduces new ideas and mechanics—a medieval vacuum that sucks up blinding smoke, for example, or a Lakitu-esque cloud—plays around with them for a level or two, and then discards them. There's a wonderful and surprising inventiveness throughout the game. It keeps you engaged, alert, and refreshed. 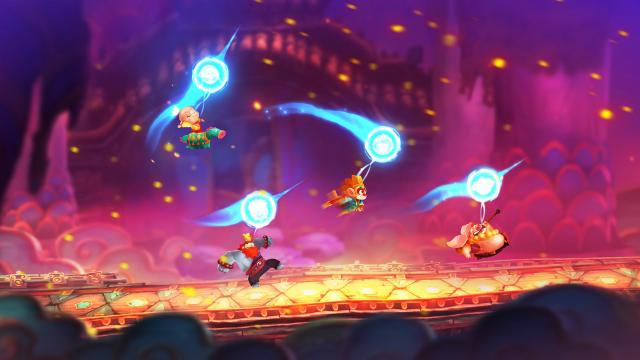 There is one gameplay idea that overstays its welcome a bit, however. In the underworld section, Sanzang, Wukong, Kihong, and Sandmonk, having been banished to purgatory, revert to their infant forms. Here they cannot use their tradition weapons, instead firing projectiles from a blue orb tethered to each of them. While ridiculously adorable, the platforming and puzzle segments that use this Muppet Babies mechanic are some of the least interesting and slowest of the game.

Whether toddlers or fully-grown adults, the fearsome foursome works well as a unit, thanks to some specialized skills and abilities. When playing solo, you'll probably settle in to a favorite hero, but it's unwise to leave the rest of the team unattended. Wukong and Sandmonk are the only two characters with a double jump, while Sanzang and Kihong share a single high jump with a floaty descent. Sandmonk is the one character strong enough to break through certain stone blocks, and only Sanzang, Wukong, and Kihong can activate special totems that activate their unique powers. Swapping among the four, often in the heat of battle or during a challenging platforming section, is essential. 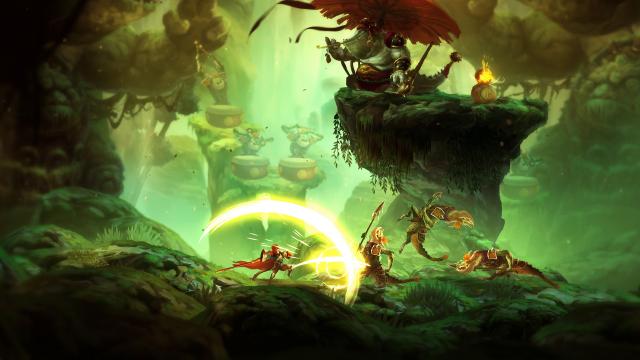 Surviving those jumping and fighting sequences is no easy task. For the most part, Magic Design Studios finds a fertile middle space between accessible and frustrating, but a few difficulty spikes and some distant checkpoints combine to make certain stretches discouraging. This happens most often when swarms of powerful enemies appear all at once or when the game veers into "gotcha" platforming. Had some of the more difficult areas been relegated to optional challenge stages or, even better, a post-game bonus world, Unruly Heroes would be even better than it already is.

As it stands, the game features 29 stages, some of which are heavier on platforming, some of which lean more on puzzle-solving, others reserved exclusively for clever, multi-stage boss battles. The entire experience should take about eight hours, but there's room to replay levels to find coins, which unlock alternate costumes for each hero, and scrolls, which unlock concept art. In addition, should you play locally with friends, you can battle for bragging rights in end-of-stage rankings. You can also battle more tangibly in PvP mode, both offline and online, although it feels and plays like an afterthought. 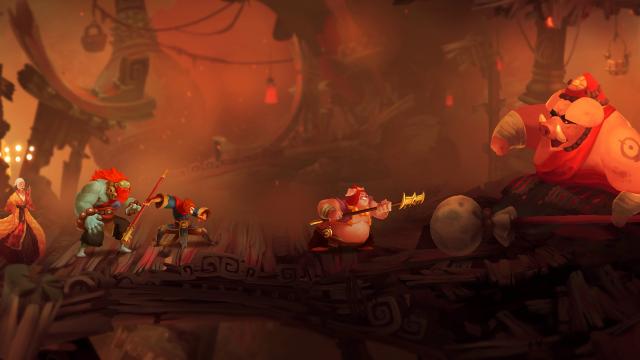 Judged on its level designs, platforming mechanics, and general ingenuity, Unruly Heroes is a really good game. Evaluated on its art direction, it's a masterpiece. Brought to life by some of the folks who worked on Rayman with Ubisoft Montpellier (Magic Design Studios is also based in Montpellier), Unruly Heroes sports some of the richest, most vibrant, most arresting artwork of the generation. The attention to detail, in individual character animations and in backgrounds, is simply staggering. It's a painting come to life.

Unruly Heroes earns an easy recommendation for platforming and action-adventure fans, some frustrating or tedious segments notwithstanding. Each level is an individual playground, with its own rules, tools, and mechanics. Puzzles are imaginative, platforming is wild and unpredictable, and each of the four main characters plays and moves differently, resulting in some satisfying swapping in the thick of things. Topping it all off is some of the most sumptuous art work you'll see all year.

This review is based on a digital copy of Unruly Heroes for the NS, provided by the publisher.