Planning a video game revival is a mostly thankless task. Stick too slavishly to, or veer too wildly from, the source material and you're bound to turn off a big chunk of consumers. Pang Adventures, the latest in the cult arcade shooting series Pang, manages to ride that line between unoriginality and heresy. It's a sporadically-fun puzzle-shooter with a welcome mix of modes, support for two players in local co-op, and some colorful assets. A couple of its innovations—boss battles and a greater emphasis on trial-and-error puzzling—highlight some missed opportunities, but overall what's bundled here is a decent mix of old-school danger and new-school accessibility.

Pang Adventures' story is slight, befitting its arcade origins. Earth is under attack by millions of bouncing balls, set loose by an invading alien force. Only the Pang brothers, with their jean shorts, baseball caps, and trademark grapple guns can save the planet. So they travel via cargo plane from Bora Bora to Scotland to Hong Kong (and many places in between), popping balls, earning high scores, and, hopefully, stopping the alien menace in its tracks. 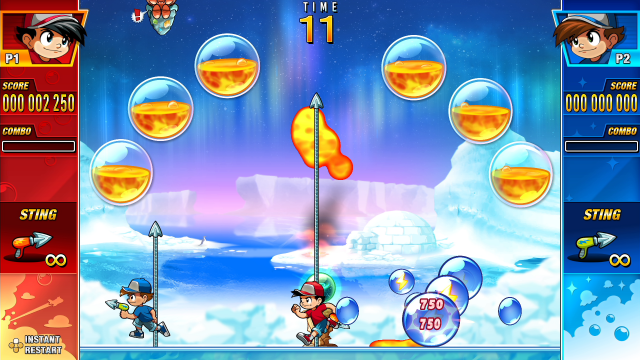 Pang Adventures is a stage-based vertical shooting game where one to two Pang brothers run along the bottom of the screen, popping and avoiding contact with bouncing bubbles and balls. It's divided into three main modes: Tour Mode, a campaign adventure with 90+ levels and several boss encounters; Score Mode, a repurposed campaign with three lives and no continues; and Panic Mode, a 99-level wave-based gauntlet. All three modes are playable with two people locally, and Score Mode and Panic Mode support online leaderboards.

While developer DotEmu has remained true to the spirt of the Pang franchise, which goes back to 1989, it has added some new features and gameplay to spice things up for the 2010s. Nowhere is this more evident than in Tour Mode, which boasts new weapons, boss fights—a first for the series—and a stronger focus on puzzling over twitch shooting (although there's plenty of that too). The new weapons, which include machine guns, flamethrowers, shurikens, and lasers, add some much-needed variety to the bite-sized stages of Tour Mode. Boss fights, while a wonderful idea in theory, are a missed opportunity. The majority are reskinned and slightly different versions of the same cyclopic alien. Only the game's final boss breaks the mold. 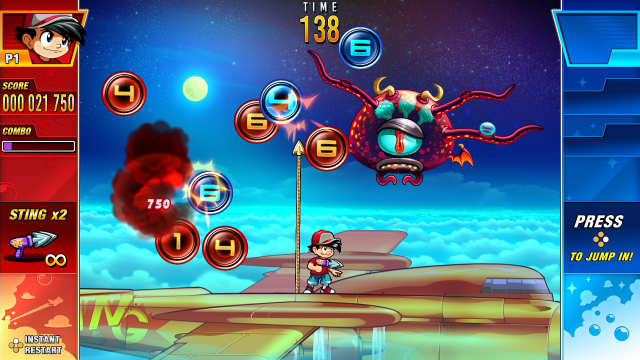 Pang Adventures' puzzle stages, while interesting and inventive mechanically, are something of a mixed bag. The gimmicks on display make individual stages more memorable, but the slower-paced trial-and-error gameplay that comes with them robs the game of its frenetic twitch action. Pang works better as a straightforward arcade action experience where players improvise on the run. This is mostly why Panic Mood, a seemingly-endless avalanche of balls and bubbles, is the game's best mode.

No matter the mode, the game plays well thanks to simple, accessible controls and easy-to-understand rules. It's a game ideal for short pick-up-and-play sessions, alone or with a friend or family member along for the alien invasion. Couch co-op is particularly fun—and easy, thanks to a forgiving revival mechanic—and encourages some healthy competition by way of end-of-stage scores. There's even a Splatoon-esque meter that goes back and forth between each player showing the point totals accumulated throughout each level. 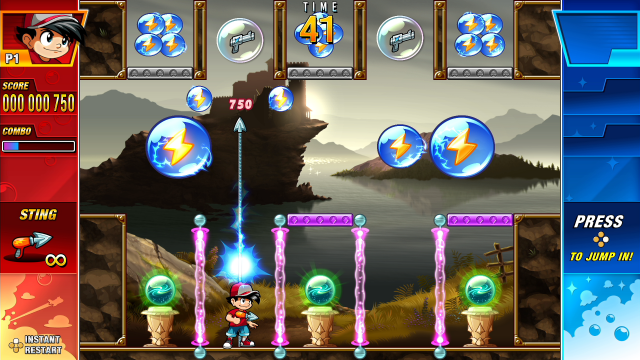 Although Pang Adventures sports some neat-looking backgrounds—look for the Loch Ness Monster swimming in between islands in Scotland—its overall aesthetic is a bit uninspired. All the models and characters have a glossy, cartoon edge that comes off as too clean. The bouncy, electronic soundtrack by Xavier Thiry, conversely, is a nice complement. It matches the intensity of (but never overshadows) the on-screen action.

In Pang Adventures, DotEmu manages simultaneously to honor fan expectations and introduce some novel ideas and features. It's the same old Pang, with updated graphics, new weapons, brand new boss battles, and more methodical game play. While some recycled bosses, overly-polished graphics, and trial-and-error puzzling hold back the revival to an extent, easy controls, approachable rules, entertaining local co-op, and the fury of Panic Mode make it a tempting title for Pang fans and followers of old-school arcade shooters.

This review is based on a digital copy of Pang Adventures for the NS, provided by the publisher.