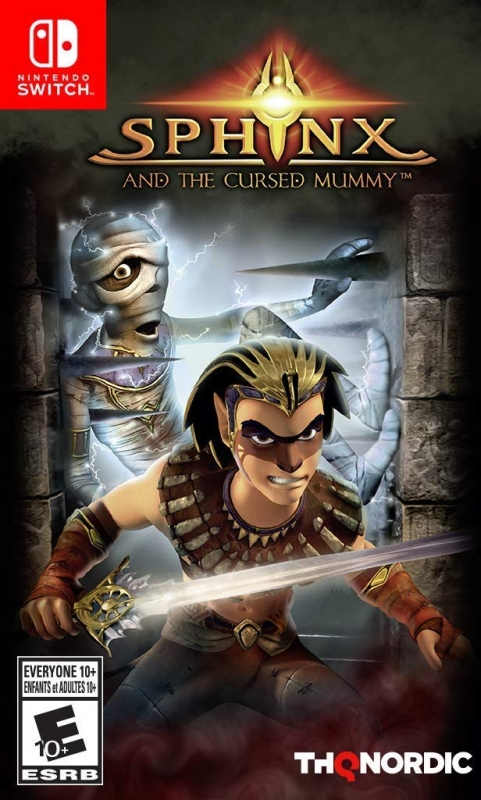 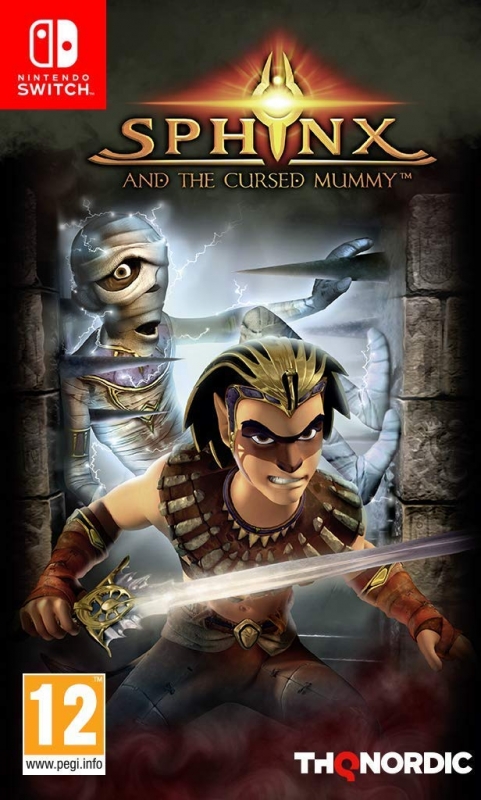 The jewel of the Nile.

Looking back, 2003 was an absolutely stellar year for 3D action-adventure and platform-adventure games. The industry saw the likes of The Legend of Zelda: The Wind Waker, Beyond Good & Evil, Prince of Persia: The Sands of Time, and Ratchet & Clank: Going Commando. Lost in the shuffle was another strong entry, Sphinx and the Cursed Mummy. Featuring two unique playable characters, a compelling story based on Egyptian mythology, clever quest and level design, and some inviting remastered graphics, Sphinx and the Cursed Mummy, now on Switch, is an ideal way to celebrate and relive the golden age of AA gaming.

Set in a remixed, mythologized version of ancient Egypt, Sphinx and the Cursed Mummy follows Sphinx, a student to the wise wizard Imhotep, and Tutenkhamen, a clumsy prince. While exploring the volcanic lands of Uruk for the mystical sword of Osiris, Sphinx travels through a portal to the kingdom of Luxor just in time to interrupt a sinister ceremony where a mystery villain performs a mummification curse on Tutenkhamen. Soon after, both protagonists—Sphinx performing heroic deeds in cities like Abydos and Heliopolis, and Tutenkhamen operating in secret out of the villain's keep in the castle of Uruk—attempt to save the ancient world. 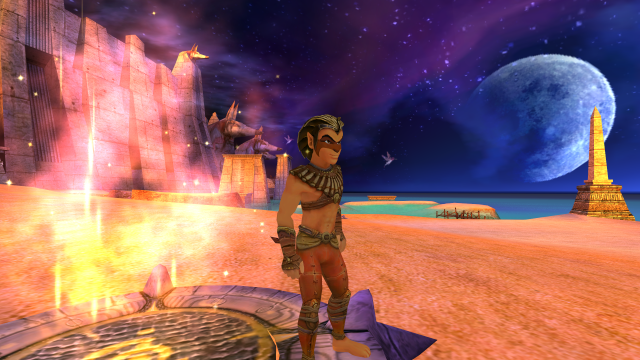 Sphinx and the Cursed Mummy plays very much like the 3D action-adventure and platform-adventure games that peaked in prominence in the fifth and sixth generations. Physical and mental challenges arrive in roughly equal measure, and gameplay falls into three broad categories of platforming, combat, and puzzle-solving. What makes the title unique is its dual-hero setup, where players control either Sphinx or Tutenkhamen, depending on the narrative juncture.

Sphinx's gameplay segments, the larger and more complex of the two, are more akin to The Legend of Zelda. The lionish hero bounces in a non-linear fashion from city to city, outpost to outpost, diving into dungeons, helping citizens in need, exploring open outdoor spaces, and taking on lots of extracurricular duties like mini-games and side-quests. There's a healthy, rewarding balance between main quest obligations and optional side content; it's easy to get distracted among the parlor games of Abydos or in the hunt for every last Atun Eye hidden in Heliopolis. 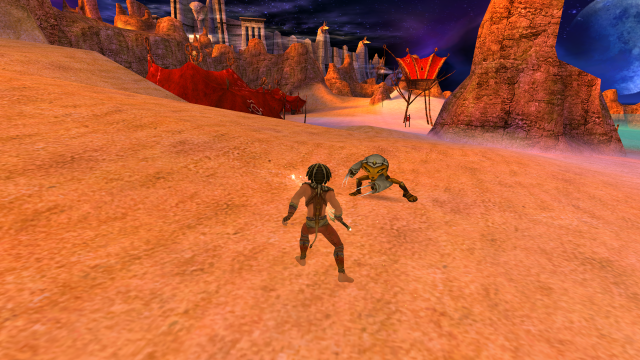 Armed with the sword and shield of Osiris, and a blowpipe, Sphinx also does a decent amount of fighting. If the game has a weak point, it’s this. Combat isn’t broken or even frustrating, but it is flat and sometimes clumsy. The lack of lock-in is the biggest offender, but some flailing enemies and unusual hit boxes do not help. The game’s makers seem to acknowledge this in several climactic boss battles, which are more about clever problem-solving and acrobatics than close-quarters fighting.

One aspect of combat, however, is worthwhile: the monster collection. Once an enemy is weakened in battle, it will begin to flash yellow, at which point Sphinx can deploy a Capture Beetle to add it to his collection. This is essential for a variety of side-quests—for example stocking the natural history museum in Abydos—and in a number of dungeons, where captured monsters are redeployed to break down barriers. Acting as an ancient Egyptian Pokemon trainer is great fun; it would be great to see this mechanic elaborated upon in a sequel (it would be great to see a sequel at all). Even the physical act of capture is entertaining. Players deploy a beetle with a face or shoulder button, then use the right stick to direct it, almost like an RC car, to the wounded monster. 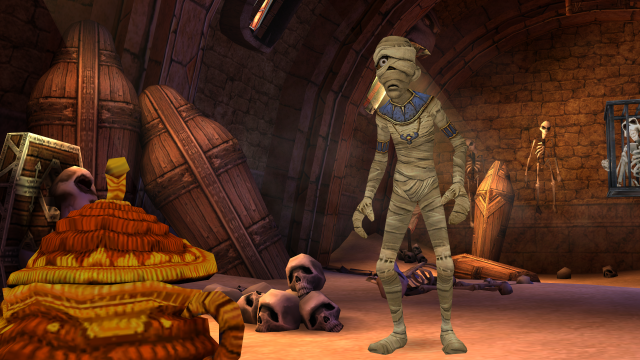 Monsters and fighting are non-factors in Tutenkhamen's campaign, which consists of a series of puzzle and platforming rooms in the bowels of the castle of Uruk. These are some of the cleverer and more inventive puzzles you'll find in a PS2-era platform-adventure game, thanks to developer Eurocom's crafty use of Tut's undead body. Traps that would kill an otherwise healthy, alive individual simply alter Tut's chemistry. Landing in flames sets his bandages on fire, which allows him to burn down wooden barricades and light furnaces. Walking between two colliding stone blocks flattens him into a paper-thin 2D outline, so that he can slide through narrow bars or float on air currents. In several scenarios, whirling blades chop the mummified monarch into three facsimiles, necessary to solve some of the castle's more elaborate puzzles.

Getting from beginning to end in Sphinx and the Cursed Mummy should take between 11 and 12 hours. However, you can add two to three more hours should you wish to collect every ankh piece (a set of four increases your life meter by one), capture every monster, finish all mini-games, and cross out a litany of optional adventures. 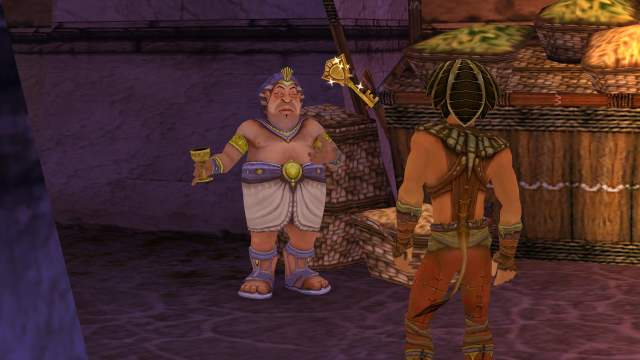 In terms of graphics and audio, this Switch version seems to be a straight port of the PC remaster from 2017 (the only thing unique to Switch, in fact, seems to be Joy-Con gyro controls for first-person blowpipe aiming). The resolution is crisp, the frame rate is smooth, the game-breaking bug that infected the original console version is long gone, and the entire production looks darn good for software now 15 years old. It helps that the original game featured impressive textures, geometry, particle effects, and animations—all of which are preserved here. Eurocom designed a new engine with Sphinx and the Cursed Mummy in mind, and it shows. The only technical glitch, apart from a sometimes uncooperative camera, is some warped and staticky music, particularly in the pause menu.

Sphinx and the Cursed Mummy is a great example of the kind of AA experience that helped define the era of PlayStation 2, GameCube, Xbox, and Dreamcast. If you enjoy arcade action, exploration, problem-solving, platforming, Egyptian mythology, or some combination thereof, you owe it to yourself to play this hidden jewel of the sixth gen, particularly if you missed it the first time around.

This review is based on a digital copy of Sphinx and the Cursed Mummy for the NS, provided by the publisher.