NetherRealm Studios is the best thing to happen to Mortal Kombat since Ed Boon and John Tobias. After successfully rebooting the famous fighting franchise in 2011 following publisher Midway's bankruptcy, the studio, headed by series co-creator Boon, turned in arguably the best installment yet in Mortal Kombat X. Now, NetherRealm has produced another great entry with Mortal Kombat 11 (MK11), a technically-superior 2D fighter rich in content and customization options.

For a lot of fighting games, story mode is an afterthought; for Mortal Kombat, it's a source of pride. MK11 continues the tradition of its immediate predecessors with an hours-long, big-budget, cinematic campaign, which exploits the franchise's rich mythology. With multiple playable characters, several stunning set-pieces, lots of unlockables—including one fighter, Frost—and plenty of fanboy fodder, it's absolutely worth playing.

Picking up where Mortal Kombat X ended, the story in MK11 follows an unlikely alliance of Earthrealm and Outworld combatants that forms to combat a new divine enemy, Kronika. Using her powers of time manipulation, Kronika seeks to reboot the universe in order to restore harmony between light and dark. To this end she manipulates multiple time streams, in the process bringing modern versions of series' heroes into contact with their younger selves, and resurrecting characters long dead. The fan service possibilities are self-evident, and Boon and company waste no time giving long-time fans all the dream match-ups and encounters they can handle.

Story mode takes up a sizable chunk of the game, but it's only one of many modes. MK11 falls into four main buckets: Konquer, Fight, Kustomize, and Learn. While "Learn" comes last, it's probably the best place to start, particularly for fighting game rookies. Here players can hone their skills against AI opponents, practice executing fatalities—the franchise's grisly finishing moves—or learn the ropes in a deep, expansive tutorial. Featuring basic, advanced, and character-specific lessons, it's a terrific primer for the complex rules and mechanics of the game. One particular lesson, "Frame Data", is a brilliant breakdown of the anatomy of a move—beginning, middle, and end. Anyone confused by the invisible science of fighting games should absolutely visit this lesson; it's revelatory. 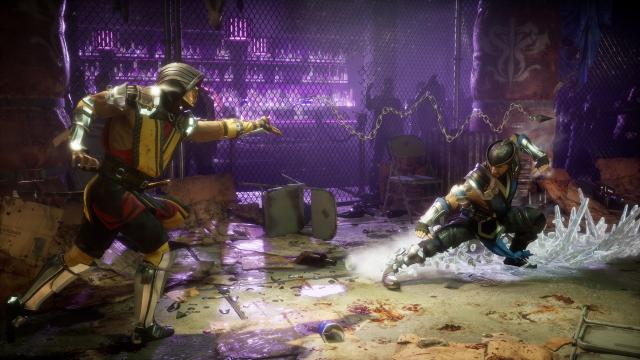 The heart of the game is "Fight", where players fight locally or online. In the online arena, players can participate in high-stakes battles against human opponents from around the globe, or try low-pressure "kasual" battles. Finding a match or creating a "kustom" lobby is quick and easy, and lag is virtually non-existent. The programmers at NetherRealm have worked wonders with netcode in MK11.

They've also turned in an entertaining, tactical fighter with support for a large cast of characters and many different play styles. Overall, the game plays tighter and slower than Mortal Kombat X, thanks to some small but meaningful changes. NetherRealm has slowed walk speeds, shortened combos, and removed run altogether to create a more deliberate fighter focused on spacing and punishing opponent misses. In addition, the developer has split the Super Meter into separate offensive and defensive meters—the former used to enhance special moves, the latter deployed for special wake-up attacks or to "fall out" of an opponent's combo. 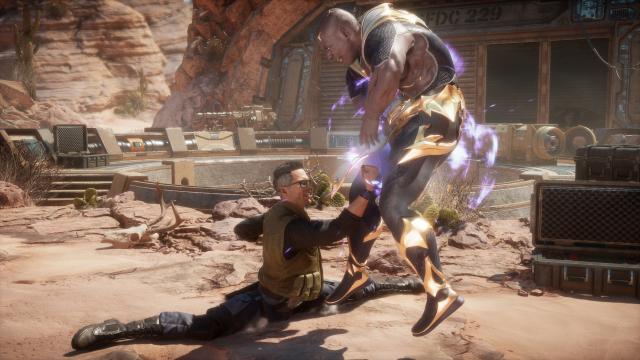 Another new, less welcome addition is the bone-cracking Fatal Blow, which essentially replaces X-ray attacks from the last game. Where X-ray moves required a full Super Meter, the Fatal Blow works independently, becoming available once a player's health is below 30%. These cinematic, gory attacks can deal up to 35% damage to an opponent, swinging the tide of battle in favor of the losing player. You can only use your Fatal Blow once per match, which limits its effectiveness across a best-two-out-of-three contest. However, if the super-move is blocked or misses, it will become available again a short time later, which is overly generous. Ultimately, it's an emergency move that seems a little out of place in a game that goes out of its way to reward smart, thoughtful play.

Once you've figured out the basics in "Learn" and visited pain upon human rivals in "Fight", you can take on AI fighters in "Konquer", which, in addition to story mode, boasts Towers and the Krypt—two staples of the series. Klassic Towers are traditional arcade single-player modes with several opponents each, and a unique ending for each character. Towers of Time is a constantly-changing rotation of challenging themed towers, e.g., "defeat an assortment of foes when random Modifiers are active." Finally, the Krypt is a giant dungeon filled with chests that require one of MK11's many currencies to open. Together, these destinations are the best way to collect the game's ubiquitous, excessive loot. 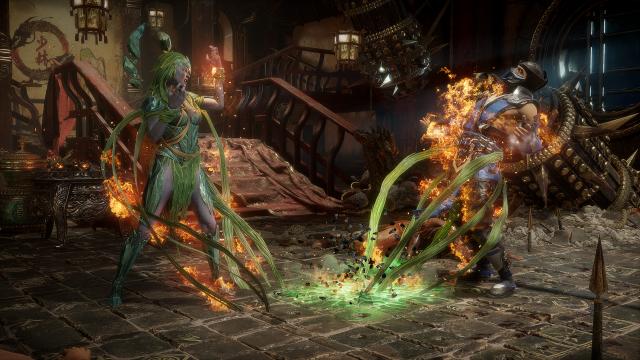 If MK11 has a flaw, it's that it has too much stuff. With several currencies—time krystals, koins, soul fragments, and hearts—daily challenges, daily rewards, konsumables, objective rewards, and customization assets like skins, intros, victories, augments, and end of round taunts, it's simply overwhelming. The game allows you to create custom characters with unique outfits, moves, and gear in "Kustomize" (player-made characters are, wisely, ineligible for ranked matches and tournament play), which is a wonderful gift, but it's an exercise in futility to keep track of your latest unlocks or even to differentiate the good loot from the bad.

A lot has been made of the game's excessive grind—and to be fair Towers are still a stiff challenge despite a recent patch—but it's not clear MK11 was designed uniquely with micro-transactions in mind. Featuring online connectivity requirements, daily challenges, and rotating items in the Premium Shop, it feels more like a game that wants to be booted up every day, not necessarily a title that demands additional monetary compensation. Only one form of currency, Time Krystals, is available for purchase in the PlayStation Store, for example; all others are earned via in-game activities. 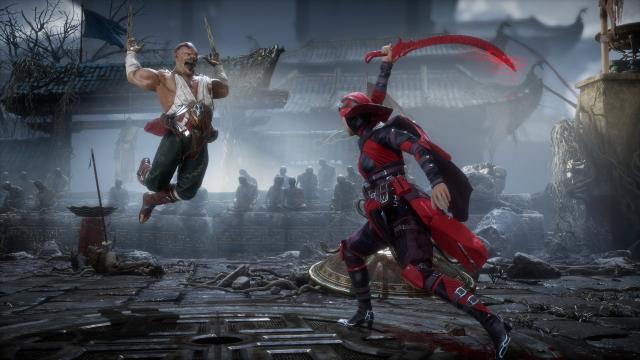 Now, if you desire a particularly rare or specific piece of gear, and can't win it in the Towers of Time or find it at random in the Krypt, you might need to spend real-world money in the Shop—assuming that item is in daily rotation. With 1,500 unlockable skins, 75 unlockable intros, and 2,250 gear pieces, however, you might just throw your hands up and focus on fighting. If you're a cosmetic completionist, well, Elder Gods help you.

MK11 sports a solid roster of 25 base characters—one of which is unlocked in story mode, one purchasable in the game's virtual store—although there is a shortage of new faces. The game includes only three new combatants (not including a non-playable boss), where Mortal Kombat X introduced eight. Stages, however, are a different story. There are 21 in total, each boasting detailed, dynamic backgrounds and plenty of interactive pieces. Kharon's Ship, an ancient galley on a sea of blood, is especially memorable. So too is Kotal's Colisseum, with its circling charioteers and monstrous beasts. 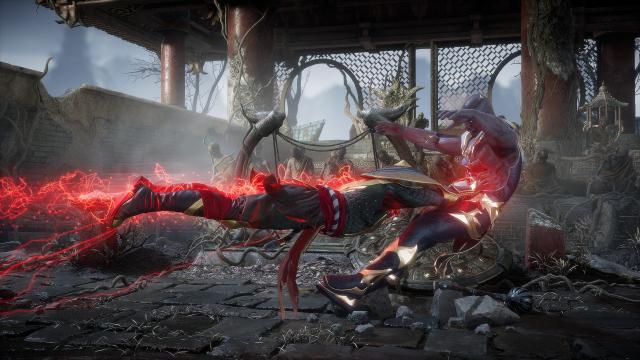 Its large list of pros and small list of cons notwithstanding, MK11 is the prettiest game in the franchise. With smooth graphics, real-time damage, detailed and expressive models, 60 FPS, and the aforementioned dynamic stages, it looks noticeably better than Mortal Kombat X—which looked pretty darn good only four years ago. Music is similarly a highlight. "Kronika's Hourglass", a mix of hip hop beats and Middle Eastern trills, is one of the more exceptional tracks.

NetherRealm has done it again. Mortal Kombat 11 is an outstanding fighting game with new, more deliberate mechanics, a spectacular story mode, and loads of online and offline content. Technically and graphically, it's a huge success, and content-wise it will keep you covered for weeks and months to come. Its relatively small roster of new fighters is disappointing and its ubiquitous, often incomprehensible loot (and corresponding grind) a source of frustration, but its exceptional fighting fundamentals and substantial modes shine through.

This review is based on a digital copy of Mortal Kombat 11 for the PS4, provided by the publisher.