The LEGO series has adapted a lot of popular intellectual properties—Star Wars, Indiana Jones, Jurassic Park—but perhaps none makes more sense with the series' gameplay conceits than Harry Potter (HP). After all, levitation and transfiguration, the staples of most LEGO games, are standard spells in the wizarding world of Harry Potter. So, it makes perfect sense that seventh-gen systems saw two LEGO HP titles, which were subsequently bundled together and remastered on PS4, and finally ported to Xbox One and Switch. Overall, the bundle is a treat for the Potter faithful, although its family-friendly accessibility might turn some muggle heads—as long as they don't expect gameplay that's deep or demanding.

The HP Collection is split into its two original games, each available from a launcher menu. The first details the events of wizard-in-training Harry Potter, from age 11-14, as he discovers his magic roots and starts sorcery lessons at Hogwarts, a boarding school for magic-users. The second game deals with Harry aged 15-17, when the demands of young adulthood and the rise of a malevolent dark wizard threaten to derail both his personal journey and the peaceful landscape of the wizarding world in general. 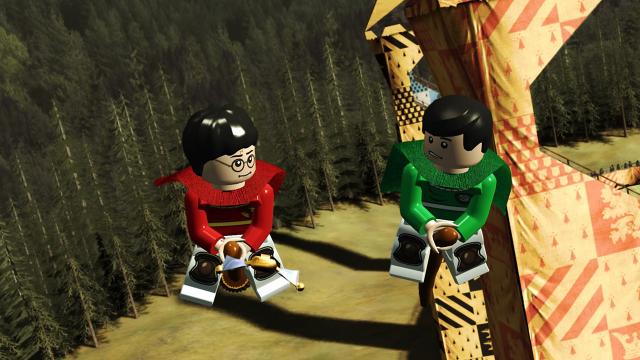 As with many of its LEGO games, developer TT Games captures these magical tales in a series of funny, flippant cut-scenes. Filled with in-jokes and sight gags, they're a lot of fun. They're also loyal to the source material—in this case the Warner Bros. movies, not the original novels. While this works well for players who've watched all eight movies (the seventh book was divided into two film installments, for those living under a rock since 2010), it's counter-productive for those unaware of the main characters and minutiae of Harry Potter, Hogwarts, et al. Since the cut-scenes are wordless and bank on storyboards from the movies, the uninitiated will struggle to keep up. As a result, this collection is best consumed after watching the Harry Potter film canon.

Both Harry Potter: Years 1-4 and Years 5-7 feature the same tried-and-true, fool-proof LEGO gameplay: action-platforming, button-mashing combat, and light puzzle-solving. Each year at Hogwarts comes with its own sub-game, with six chapters united by a hub world—the interior and grounds of Hogwarts, the streets of London, or a combination of the two. Individual chapters typically find Harry and best friends Ron and Hermione learning spells, blasting bad guys, and transforming piles of loose LEGO bricks into something useful. 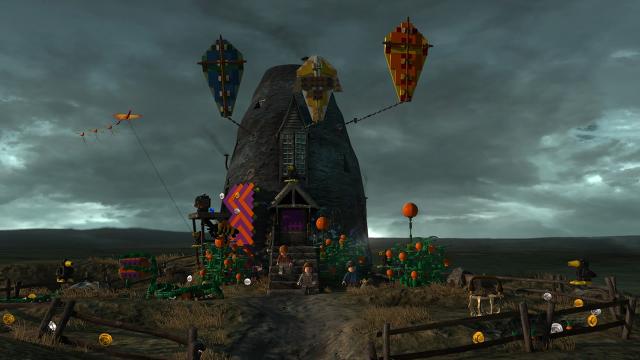 The general gameplay works well enough—particularly for younger players and families—but falls on the shallow and simple side. Take the mechanics of Wingardium Leviosa, the most prominent spell in the game, for example. Harry or whichever playable character is controlled at the time will spot an item bathed in a purple glow. He'll cycle through a spell wheel to pick Wingardium Leviosa, then hold down the A button, and the spell takes the purple item and moves or transforms it accordingly. A pile of sticks becomes a bridge, a barrel is turned upside down, etc. It's simple and effective, but not terribly challenging or rewarding. Often gameplay in the Harry Potter Collection boils down to standing in the right place, selecting the right spell, and pressing A.

Now, of course, there are exceptions. Some puzzles require some outside-the-box thinking and a few boss fights test your dexterity and timing. A year three mini-boss fight against Harry's Hogwarts nemesis Draco Malfoy, where Harry and Hermione must launch snowballs back at the sneering student, is especially good. There are also a handful of stages that break up the standard action-platforming bits, including a car escape toward the end of year two and a behind-the-back on-rails flying sequence at the onset of year five. 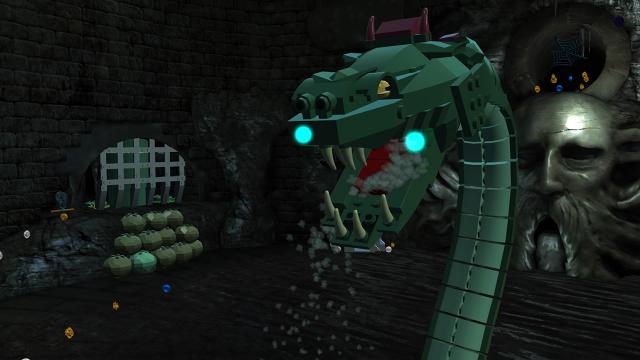 These sequences, and everything else in the game, are playable with two people in local co-op (again, great for families). While this disrupts the traditional narrative—Harry should face the dragon from the Triwizard tournament alone, not with Hermione, for example—it makes the puzzle-solving and spell-casting a lot more fun. Be warned, however: the HP Collection uses a diagonal split-screen set-up when the two co-op partners stray too far from another, resulting in some visual disorientation (WiiU, with its second screen, remains the best way to play local LEGO games).

When not adventuring through adolescence or avoiding the apocalypse, Harry and friends can retire to the Leaky Cauldron, a tavern from which players can view videos, replay individual chapters—necessary to find all unlockable characters, collect all tokens, and achieve 100 percent completion—and access Diagon Alley. In the alley, there are several shops that sell new characters, spells (not essential to beating the game), cheats, and other items. At the back of Diagon Alley is the goblin bank of Gringotts, which hosts several bonus stages and a neat level editor mode. The HP Collection isn't wanting for content or replay value, that's for sure. 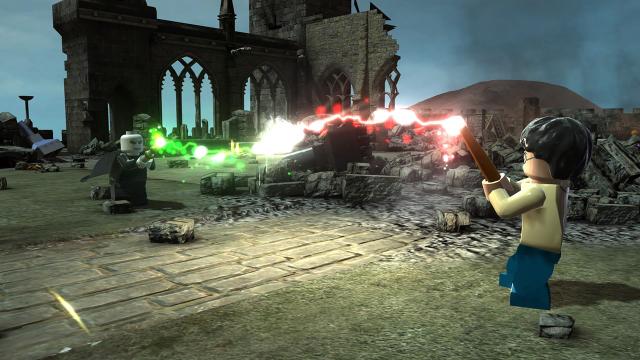 Apart from its wealth of content—in addition to dozens of levels and hundreds of characters the compilation includes two DLC packs with new spells and new characters like Godric Gryffindor, Helga Hufflepuff, Peeves, Rowena Ravenclaw and Salazar Slytherin—the HP Collection offers enhanced graphics, environments, lighting, and visual effects. While these aren't a quantum leap over the older HD console versions of Years 1-4 and 5-7, they're certainly an improvement—particularly compared to the Wii, DS, and PSP variants.

With a friendly approach to gaming, a warm sense of humor, and lots of content, the HP Collection is a good investment for younger and/or less accomplished gamers, or anyone who loves the Harry Potter IP. Shallow, undemanding gameplay will make it less attractive to experienced players.

This review is based on a digital copy of LEGO Harry Potter Collection for the NS, provided by the publisher.