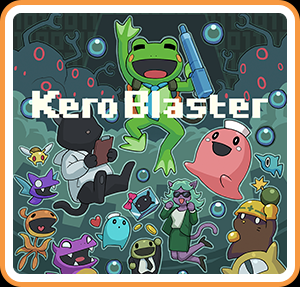 The tag line for Nintendo Switch might as well be "everything old is new again." Joining the already vast collection of retro titles and modern software trafficking in 8-bit nostalgia on Nintendo's hybrid is Kero Blaster, an action-platformer that debuted on PC and iOS in 2014 and arrived on PS4 in 2017. With its NES-era graphics, chiptune music, high difficulty, and mechanical accessibility, it's a game perfect for those who grew up playing Mega Man and Contra. Its only major defect is a short running time.

In Kero Blaster, you'll play as a put-upon frog who works for the start-up Cat & Frog, Inc., a teleporter company. When the president starts acting (and looking) strangely, and mysterious black creatures begin showing up in teleporter rooms, the heroic frog sets off to save the day. It's a simple story, but it's infused with enough ironic, dark humor to keep things interesting throughout. Often, the employees of Cat & Frog worry more about overtime than the end of the world. 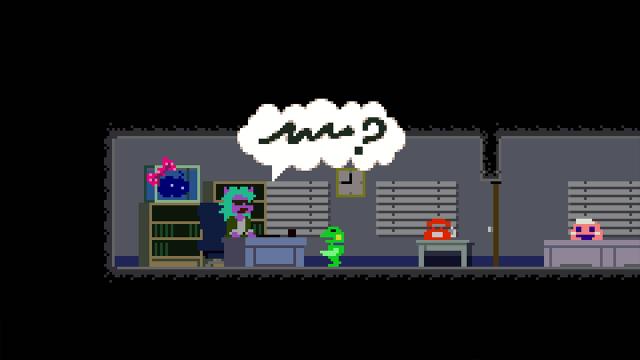 Kero Blaster is a side-scrolling action-platformer in the style of Mega Man, Contra, and early Castlevania titles. Players will run, jump, hover, swim, and shoot through a series of mostly-linear levels, each culminating in a fight against a boss and, often, a reward in the form of a new weapon type. Along the way are hidden items, like chests and extra lives, and shops — which sell permanent weapon and health upgrades. If you lose all your lives in a level you have to start from the beginning, but all your accumulated gold and power-ups will remain.

These persistent items and upgrades are important, because Kero Blaster, like its old-school inspirations, can be tough. You'll start with two hearts and a pea-shooter, and will need to persevere (and collect coins) to start making a dent. Even with maxed out weapons, late-game stages are no stroll in the park. Make a few too many unforced errors and it's off to the hospital for your indentured frog. That said, the game never feels unfair; checkpoints are frequent, and enemies typically telegraph their attacks. 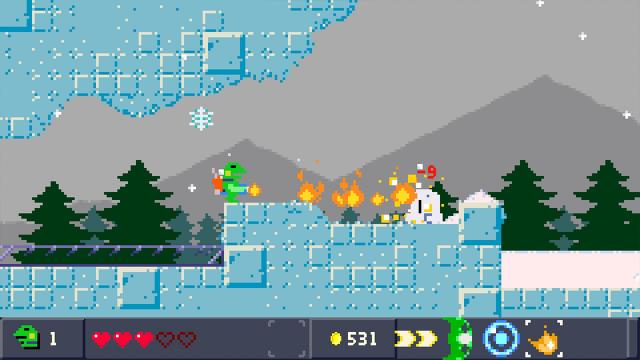 Stage design in Kero Blaster is a highlight. There are earthy stages, industrial and subterranean levels, and a chilly mountain climb coated in ice. Each has a specific visual identity and its own unique enemies, hazards, and platforming challenges. Some introduce gusts of wind that threaten to send you off course, others add long vertical and horizontal gaps that demand careful use of a jetpack power-up, and still others trap the amphibious adventurer underwater, where air pockets act as moving platforms. Moreover, levels tend to dovetail with the game's collection of swappable weapons: the flamethrower melts ice blocks, the repeater/laser hits far-off enemies, and the bubble gun is perfect for rolling projectiles down hills and onto lower platforms.

Controls are mostly intuitive and snappy in this follow-up to Daisuke "Pixel" Amaya's cult classic Cave Story. You can shoot up, left, and right; jump; and hover, once you unlock the jetpack. There are, however, a couple of eccentricities that take some practice — particularly compared to modern action-platformers with more fluid, flexible movement. Players must release the shoot button before turning left or right to actually turn, otherwise they'll only back away, facing the same direction. Likewise they should leave the analog stick or d-pad still while using the jetpack to achieve a vertical ascent; angling the stick while jumping will send the froggy fumigator sideways. 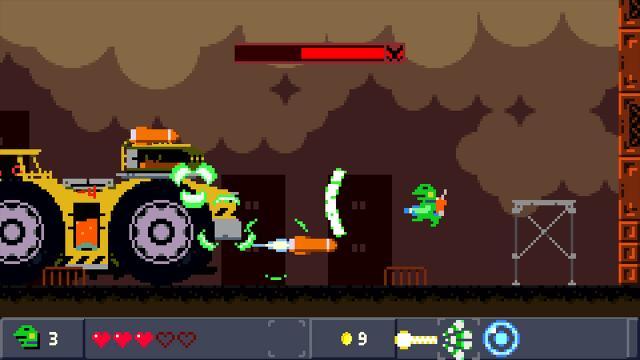 It's in the area of boss fights that the game is perhaps most impressive. Throughout the main campaign there are several sub-bosses and end-of-stage bosses with clever attack patterns. There's an armored plant that shoots fireballs, a giant fish that lurks beneath suspended platforms and fills the air with deadly lightning, a possessed construction vehicle outfitted with heat-seeking rockets, and many more.

Kero Blaster has solid controls, stages, and boss encounters, but it's unfortunately short. You could finish the main campaign in a brief two hours. Luckily, there are a few features that extend the platformer's life, including in-game achievements and several post-game modes, including "Zangyou" mode, which boasts remixed stages, new levels and bosses, and a brand new storyline. Even so, you're probably looking at four to five hours' worth of content. 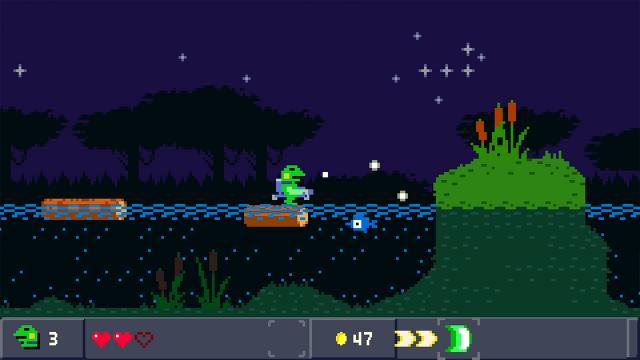 In terms of visuals and sound design, Kero Blaster is everything you'd want from a NES-era game, and more. The chiptune music is playful and fun, and the pixelated graphics charming in their simplicity.

Switch has made a habit of playing host to old-school re-releases and modern games with nostalgic gameplay, and Kero Blaster, in a way, is both. It has an artistic simplicity and mechanical purity reminiscent of Bill Rizer, Simon Belmont, and the Blue Bomber. With a little more substance and depth (and a longer running time) it could flirt with greatness, but even without it's an engaging, entertaining action-platformer worth its modest asking price.

This review is based on a digital copy of Kero Blaster for the NS, provided by the publisher.