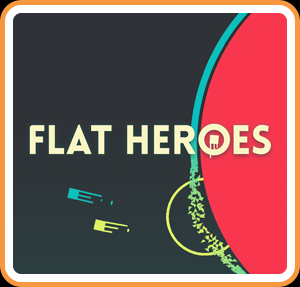 It's hip to be square.

Looking at screenshots of Flat Heroes doesn't do it justice. With its minimalist graphics and blocky characters, it could be mistaken for a cheap mobile or browser game. Yet seeing it in action or, better yet, playing it for hours, reveals a clever, reflex-based platform game with tight controls, an impressive amount of content, and a host of (sometimes frustrating) challenges to overcome. Like N++, this is platforming stripped down to its essence, minus any storytelling, characterization, or exploration opportunities. If you care deeply about the mechanics of platformers, and not simply the trappings, this is the game for you.

In Flat Heroes, you control a two-dimensional, colorful square that can jump, air dash, and deploy a shield — and that's it. In the absence of more complicated controls — not to mention collectibles, backtracking, NPCs, etc. — this platformer needs to nail the basics, and it does. Controls are intuitive, tight, and responsive, and level design is routinely clever, imaginative, and, at times, supremely challenging. 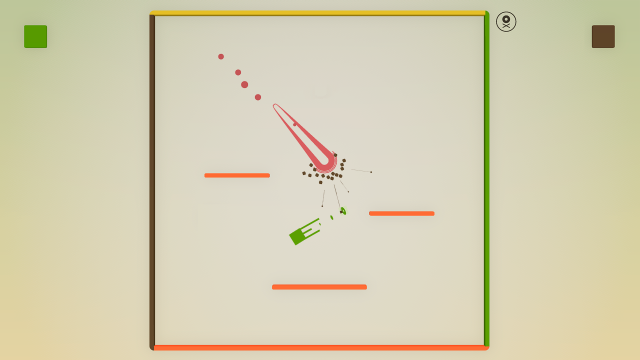 Across 300 creative campaign levels — 150 normal levels and 150 unlockable extra-difficult versions of those levels — your square will avoid heat-seeking rockets, walls of deadly lasers, and many other stage hazards, all by jumping across platforms, clinging to walls, and dashing through the air with perfect timing. Each stage is roughly 30-60 seconds long, à la Super Meat Boy. At the end of every world is a boss battle; it's here where developer Parallel Circles gets the most inventive.

Where some of the standard stages in Flat Heroes — especially those in World 6 and beyond, when the difficulty ramps up to menacing levels — feel more luck-based than anything, boss encounters demand a great deal of skill and foresight. Highlights include a giant floating circle that rains down lasers and rockets with increasing speed, and a rival block that emulates the arcade classic Blockade, and the "snake" games that followed it.

If you're running into exasperating situations in the game's campaign, you can always lessen the burden by bringing in up to three friends in local drop-in/drop-out co-op. Best of all: only one co-op partner needs to survive each level in order for the entire group to move on. While Flat Heroes is worthwhile as a single player experience, it becomes even more fun and addictive with a room full of friends.

That reality extends to the title's suite of local competitive options. While solo players can introduce AI competitors (with corresponding difficulty levels), it's much more enjoyable to compete with flesh-and-blood humans in Flat Heroes' four multiplayer modes: zones, battle, runner, and catch. Zones is a variant of king of the hill; battle asks players to use their shield ability to destroy each other; runner is a bit like laser tag; and in catch, each player tries to be the first to reach randomly-appearing tokens.

After you've finished 300 campaign levels and exhausted all multiplayer options, you can test your endurance in the wave-based survival mode, which includes daily challenges and online leaderboards. 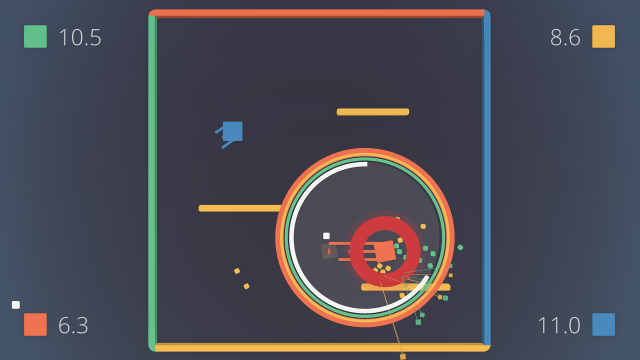 Flat Heroes sports an understated, streamlined, minimalist art style that works well with its simple moveset and spartan level design. If you're not in love with the default color scheme, you can unlock new palette swaps by completing each of the game's ten worlds at 100 percent. Music is a collection of upbeat techno tunes and arcade beeps — suitable but forgettable.

Stripped-down games like Flat Heroes are only as good as their controls and level design, and, thankfully, both categories score high marks here. While there are some difficulty spikes in worlds six through ten (including a brain-melting end-of-game boss) and some undistinguished production values throughout, they don't undermine the fun, frantic platforming on display; nor do they erase hundreds of levels and several cooperative and competitive modes.

This review is based on a digital copy of Flat Heroes for the NS, provided by the publisher.