While wielding a lightsaber is immediately gratifying on a base level, the rest of the experience is hot and cold.

It’s been nearly a decade since we were last given a single player story-driven Star Wars game with the second Force Unleased game, which may be why so many of us were all chomping at the bit for Fallen Order. That and we’ve been tempted before with Star Wars greatness with the likes of Star Wars 1313, only to have it cancelled and ripped away. Then there was the Amy Hennig project; the famed Uncharted creator was brought on by Visceral Games to work on their Star Wars game... only for the developer to be shut down in October of 2017. Each canned entry promised a unique and riveting Star Wars experience that eventually died. When it did, so too did Star Wars fans' hope for ever having a brand new quality, story-driven Star Wars game to play.

While wielding a lightsaber is immediately gratifying on a base level in Fallen Order, the rest of the experience is hot and cold. The gameplay suffers from an identity crisis as the bland Cal Kestis leads the cast through a mostly uninteresting story. Plastered with a coat of Star Wars paint, this Souls-like mixes overly familiar elements from Uncharted, God of War, Titanfall, and Dark Souls, leaving no room for a soul of its own. Despite the pedigree the moniker innately implies, Star Wars Jedi: Fallen Order is not the chosen one. 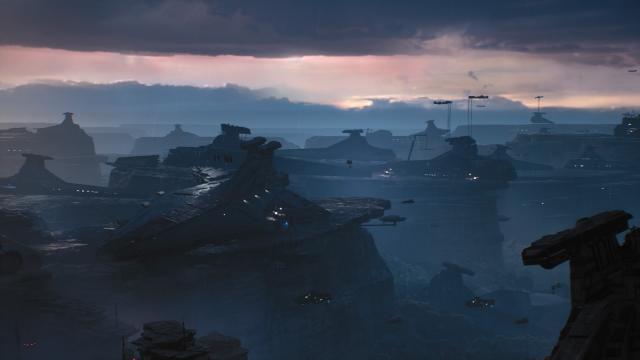 Enter Stig Asmussen, known for his work on the God of War series. Stig joined Respawn Entertainment as the studio’s game director for Star Wars Jedi: Fallen Order and it's in the context of this move that it quickly becomes clear as to how Fallen Order became the Star Wars game with no identity to call its own. Building on what Amy Hennig (Uncharted) started, Stig (God of War) and Respawn (Titanfall) go the much beloved Souls-route in the hopes of crafting a winner. What we ultimately end up with, though, is a hodgepodge game that never really excels at anything. Not its inspiration, or its Star Wars source material.

You play as Cal Kestis, your run of the mill, underwhelming, plain as vanilla Jedi Padawan who has gone into hiding after the execution of Order 66 (the extermination of all Jedi, for those that don’t know). An accident on the job makes Cal use his Force powers to save his friend Prauf from falling to his death. Having now exposed himself, though, he has to go on the run to evade the Inquisitors, who are trained to track down and kill Jedi. While attempting to flee, he is rescued by former Jedi Cere Junda and a four-armed pilot, Greez Dritus. Aboard your spaceship, The Stinger Mantis, you three make up the team that is set to try and rebuild the Jedi Order.

Traveling to the starter planet Bogano, you meet BD-1, your personal multi-tool droid, good for all manner of lockbox looting and door unlocking. It’s on Bogano that you learn of a hidden Jedi holocron containing a list of “Force-sensitive” children, which Cere believes could be the starting point to restore the Jedi Order and crush the Empire’s rule. 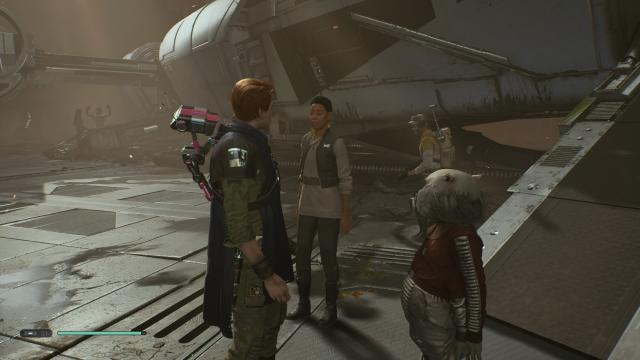 The gameplay of Fallen Order, which can be fun at times, is lifted and pieced together from several different games to make up its core mechanics, most of which fail to live up to their inspiration. Let’s start with the most obvious direction: Dark Souls. It seems everyone these days is overlaying the Dark Souls template onto their games to bring their ideas to life. Well, Star Wars is sadly no different. Meditation circles act like bonfires, allowing you to save and spend ability points on different skills. Falling to an enemy means you have to retrace your steps and attack that foe again to acquire your lost Life/Force/EXP. The difference here is that meditation circles are everywhere. Where Souls games make bonfires a long-lost refuge, difficult to reach and few to come by, Fallen Order practically has you tripping over them every few steps, cheapening the victory of making it to safety.

Likewise, in an effort to remain true to the Souls series, the combat is meant to be weighty and challenging, but usually ends up being anything but. When fighting enemies one on one, it can be a satisfying experience. Circling your opponent, squaring off with parries and special ability overhead lightsaber strikes is enjoyable. Toss in a few force pushes and you've got yourself the basics of a Star Wars/Soulsborne hybrid. The system breaks down, though, when the game constantly throws groups of 4-6 enemies at you at once. It no longer feels like challenging precise combat, but more akin to the hack-n-slash God of War variety. Which would be fine, if waves of enemies broke across my lightsaber like they tend to do in God of War on your axe. But when everyone blocks incessantly, and you’re managing your Force gauge (which is always depleted at the most inopportune time) mid battle, and dealing with stamina depletion, it feels like a broken balance of the two source games.

Something else is off about the combat too. Attacks have this really slow and labored wind-up to them, seemingly a second or two longer than all other enemy attacks, even the little runt mobs. The lightsaber itself should be fairly light, and easy to maneuver with, but instead it handles more like a heavy two-handed hammer. Unless you wait to perform a parry you'll usually be caught mid slice and knocked down like a chump. Two-thirds of the way through the game I realized that the combat system was “middling” so badly between Souls/GoW that the only way I was going to have any fun was to turn the difficulty down to story mode and help the game artificially find some direction. Playing hack-n-Slash God of War style with a lightsaber definitely bolstered my enjoyment of the combat portion of the game. It’s not that the combat is bad, it just doesn’t satisfy like it would if it had more focus by leaning more toward the precise one-on-one combat of the Souls series or plowing through enemies a-la God of War, but not both simultaneously. 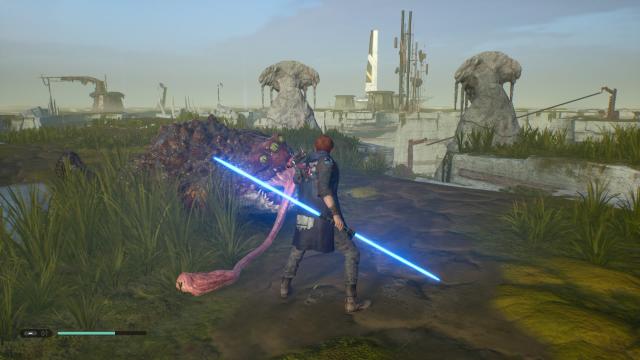 It’s this lack of individuality that ruins Star Wars Jedi for me, as the entire game is cobbled together from several other great games that came before it, masquerading as something exclusive using the Star Wars name. Cliff hanging, climbing, and jumping are lifted from Uncharted. The larger enemies are defeated in grandiose GoW fashion, but with less panache and much more quickly. Wall runs are pulled directly from Titanfall, all novel at first, but they get old quick, especially since we’ve seen and played it all before in those games. The worst part is, the ideas are never repeated or reused in new ways. You never wall run over opponents and land behind them, striking swiftly from behind with your lightsaber. That would have been cool! No, instead, its mundane routine inclusion as terrain traversal is the limit of that gimmick. These criticisms are not to say you can’t take inspiration from other places, but use them sparingly or in a way that enhances your own uniqueness, not sacrifices it.

And don’t get me started on sliding down mud/ice covered terrain and jumping to low hanging ropes. I can’t tell you how many times I cursed at the screen as I slid off the edge and was sent back to start again. Or missed the rope on my jump because it passed to my left instead of hitting me straight on. These portions of the game are meant to be exciting and pace-quickening. When you have to replay them over and over to move on, the wow factor of the moment is lost. Controlling your downhill slide should be smooth and effortless, similarly with grabbing the rope to swing on. If you’re in the vicinity of the rope, your on-screen character should grab it, feel like a bad-ass, and move on. Not so in Fallen Order. I ran into many other instances where landing a jump on a nearby pipe should have been magnetically assured from a game-design perspective. Instead, I fell to my death needlessly. Star Wars Jedi: Fallen Order is riddled with these kinds of sloppy technical issues; in combat, platforming, and graphics.

The visual fidelity of Star Wars Jedi succumbs to the same shortcomings as the rest of the game. Sometimes I’m blown away by how good an area looks, other times I’m stunned by just how soft and fuzzy the faces are, or how washed out an area looks. Personally, I felt that using darkness to evoke mood was overdone. While darkness can lend mystery and intrigue to an area, it works best in the movies. When you’re trying to play a game where exploration is at the forefront, not being able to see anything really hurts the experience. There is an enjoyable mechanic of holding your lightsaber up to illuminate the way, but that only works in really tight, close spaces, and it slows your walking pace to a crawl. 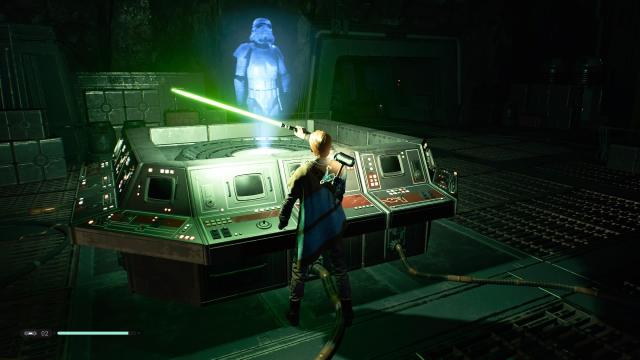 A plethora of other non-game-breaking issues plague the Fallen Order. In-between beats of greatness as a Jedi, stuttering character animations, frame-rate drops, lengthy load times on death, and texture pop-in prevail throughout. These issues were noticeable from start to finish and detracted from the big budget Star Wars experience I was promised. I don’t usually mind minor technical issues like these, but when coupled with the rest of the game’s flaws, it really began to add up, making them harder to forgive by the end of the game.

One area I had zero discrepancy with was, surprisingly, the audio. Who would have thought that the newest Star Wars game would see me praising the sound design above all else? Soundtracks and effects all strongly evoke the mood of the Star Wars universe. Simple melodies piqued my interests during exploration, and the unmistakable sound of your lightsaber swinging through the air is utter perfection. Blaster shots being deflected are spot on and BD-1 fills the roll of R2-D2 with beeps and boops nicely. Too bad the rest of the game isn’t as strong as the audio.

I really wanted to love Star Wars Jedi: Fallen Order. The first few hours were good. The last few hours were great! However, the entire middle portion of the game is frustratingly mediocre due to Respawn never nailing down its focus. There are little pockets of brilliance here and there, like how flashbacks are handled in the opening hours, or the story section about Cal's master, Jaro Tapal, after learning that Order 66 had been initiated. But these moments are stretched too thin, and occur too infrequently to carry the tone throughout the game. During the final hours, though, I actually said aloud, “why couldn’t the story, combat, and visual flair have been this good the whole time?” 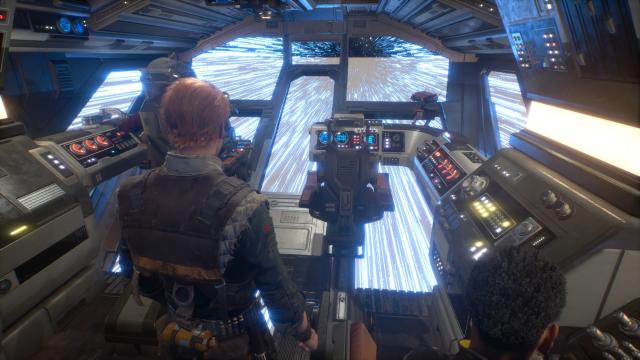 With the story component faltering and the cut-and-paste gameplay elements of other titles robbing it of rarity, I didn’t enjoy my time with Fallen Order as much as I hoped I would. While I would have liked to have seen Respawn introduce fresh new gameplay elements of their own, at least there are redeeming qualities to this galactic tale that really shine. Here’s hoping the next installment refines these issues, and that it isn’t too far, far away…

This review is based on a copy of Star Wars Jedi: Fallen Order for the PS4