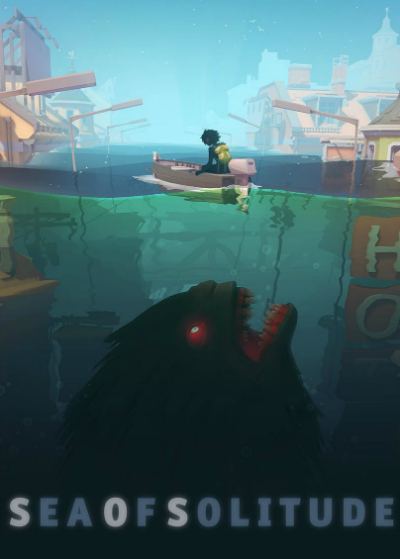 “This game contains sensitive topics that some may find distressing, related to mental and emotional wellness.  It is not intended to serve as professional advice or guidance.  Sea of Solitude is a personal project about loneliness inspired by my own experiences and other real life stories.  Kay’s journey is about what it means to be human and live with all of life’s ups and downs.” - Cornelia Geppert

I know this may sound cynical but surely I can’t be the only one who gets flashbacks to Ubisoft’s introductory text splashed on all their modern games; how their games are “made by a diverse group of people” and so on.  As I’m often left confounded by such an unnecessary report, so too am I failing to see what purpose is accomplished with Solitude’s preface.  Slating an innocuous preamble may seem petty, yet it also strikes at the weakest aspect of this game’s overall message and function.  Developer Jo-Mei Games does a satisfactory job at crafting a nuanced audio-visual canvas, but this ship ultimately sinks by not awarding latitude for unique interaction in both its story and gameplay. 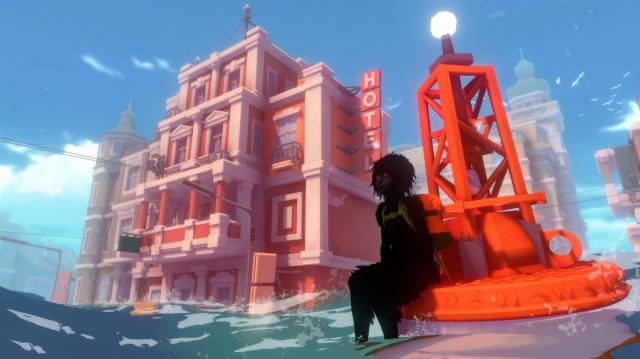 After that written intro, Kay wakes up alone on a dingy floating in unfamiliar waters.  She’s also transformed into a creature: her body robed in black feathers, eyes changed to crimson, and wearing an orange backpack. She initially meets a flying girl in a raincoat whose radiance acts to guide her through this depressing world.  Along the journey, Kay stumbles upon several other black creatures with blood-red eyes.  Some seem primarily intent on obstructing her path or outright killing her; others are less hostile and in need of redemption.

Many astute readers could parse out the potential metaphors and themes on this alone.  And I mean it when I say this: I believe the parallels are instantly recognizable and can understand why this would feel so important to the artists.  Topics like loneliness and depression are potent ideas to unearth. 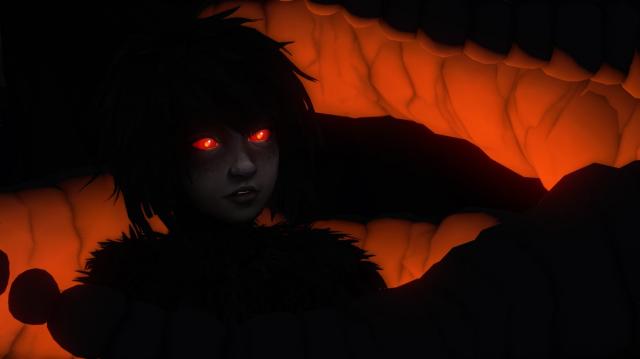 The incipient stages do a great job of communicating those topics too.  This gargantuan girl huddled inside a giant shell lobbing verbal daggers at you is a meaningful first encounter because of what she symbolizes and how obstructive she is throughout.  That’s quality ‘mini-boss’ material.  The next creature is a sea monster that casually lures Kay in the hopes of devouring her whole.   There’s something so mephistophelian with this creature too: the fish-monster hybrid design, subdued-yet-menacing tone in stated dialogue, effective color shifts when in spitting distance of Kay, and a dogged persistence to the point of crashing at full speed into buildings if it’s a close chase.  These two rudimentary appetizers work by succinctly presenting Kay’s mental state.  It’s almost like a profane cooperation of two disparate forces when one’s isolated: if self-flagellating criticism isn’t enough of a roadblock, depression will try to consume you outright—always giving you enough room to test the waters before coming in to strike.

Perhaps my analysis on clinical depression is slightly uncouth and incompatible to what’s actually happening in such cases.  But I’m only utilizing rash interpretation here as a means of showcasing these monsters’ implicit meanings because that’s rarely seen anywhere else.  The main chapters are a vehicle for Kay to assist a new strangely-familiar monster in need.  It’s here the writing transitions from the metaphorical to the blatant, as it’s just Kay reciting moments in her life verbatim.

Whether it’s the walls she constructs around her immediate family or wading through a romantic relationship, background voiceover provides context as Kay progresses through the game.  “Could this possibly mean?  Is it-” Let me stop you right there and say yes it does mean that; in fact, the game can’t seem to stop talking about… what it’s about. 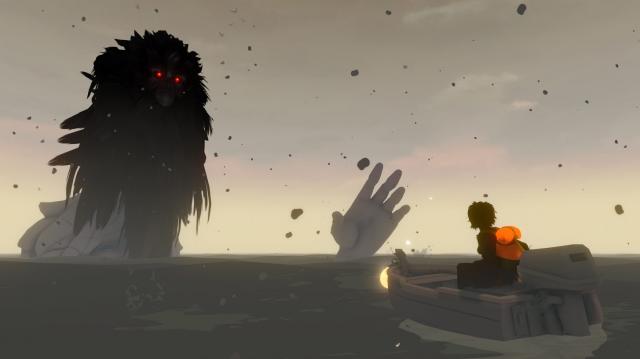 The best example would be Kay’s examination of her romance.  A large & majestic white wolf invades the frame, but the slightest touch from Kay reveals it as a façade.  He’s another black, depressed creature underneath.  Oh, he can’t stop crumbling every time he’s touched!  Another example of simple visual language to introduce Kay’s ex-boyfriend that’s wasted by the text reiterating over and over that maybe she shouldn’t be so overbearing.  Tie in this incredibly obvious message with treacly-written dialogue you’d find on the typical Tumblr blog and you know what to expect from this level.  It’s a shame: the most visually impressive locale also has the most inartistically written side story.

That portion reflects Solitude’s writing as a whole.  I’m eager to latch onto obvious visual metaphors scattered throughout, but those become drowned out by hours of dialogue-heavy parts that subtract from the experience.  Both depicted romances had me distracted by my thoughts wondering “how are these two even together?”  And every other touchy topic feels like an artificial facsimile of how these issues are tackled.  It’s a story so overly earnest in wanting to spotlight depression that no one bothered to question how awkward these lines sounded.  Did anyone think of doing a table read? 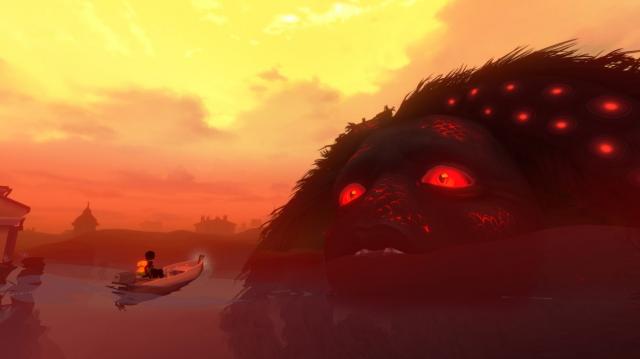 Solitude doesn’t have much of a gameplay foundation to stand on either.  The closest gameplay relative would be 2015’s Submerged: light platforming and puzzle-solving with an emphasis on boating around to arrive from A to B.  It’s only a few played-out ideas away from being another walking simulator.

As stated before, one of the game’s chief “mechanics” boils down to playing keep-away.  There’s the vicious sea monster which patrols near your location if the boat’s not around.  The tactic rarely fluctuates from waiting until there’s some distance before hurrying to the next platform.

There’s a looser set of rules when dealing with on-foot combatants.  When guarding pathways or glowing orbs, Kay’s required to get just close enough to enrage faceless school bullies and then run away to spring a trap.  But the design of this feels obtuse because of lacking visual communication and no hard-set rules to grasp.  You have to be within mere inches of them to pull aggro and have no breathing room for a mistake.  You’re guaranteed to take some damage and feel swamped during the final obstacle as a result.  The way damage is doled out by them and how regenerative health was handled all point to Jo-Mei not having a concrete plan in implementing these enemies.

There are some positive gameplay qualities too.  The most routine action is freeing orbs from coils of black smoke by being within proximity and holding RT.  This depression emancipation is the main method of conferring voiceover flashbacks.  Freeing those orbs comes at a cost: the weight and size of Kay’s backpack increases the further she progresses.  This may be the one symbolic thing in the entire game that isn’t over-explained by the game’s dialogue. 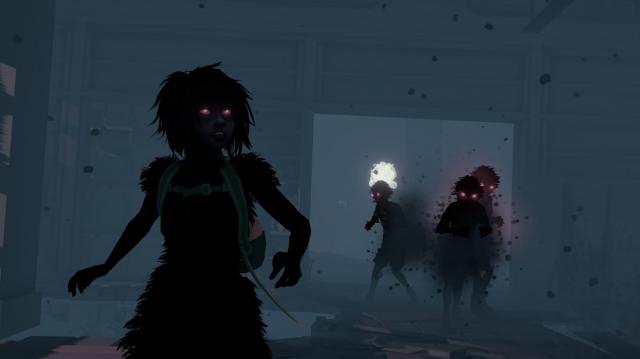 Going back to Submerged comparisons, it’s fascinating to see how these games balance boating with more traditional on-foot exploring and platforming.  Solitude gets a leg up in respect to platforming by actually having it versus the authoritarian control for climbing and jumping in Submerged.  If you’re going to give the illusion of platforming in a 3D space then give that to the player.  Although sometimes finicky, there are a wealth of moments enjoying the simple act of grabbing onto virtually any ledge off the beaten path to acquire some collectible or marvel at the world’s different stages.  Whether it’s when evading that fish monster at nighttime or when the water descends to reveal parts of a sunken city, the environment's layout often encourages expansive exploration.

The platforming functions but doesn’t congeal into a satisfying whole, overall.  Credit is due to the mechanical sensation of platforming; then again, these are aspects that better games have managed to accomplish for decades.  It’s the supplementary gameplay moments that reveal Solitude’s defects.  If it’s not a mechanic that’s tediously reused it’ll be half-baked and frustrating.  It’s another game to jot down in the category of having a singular story in mind and prying any way to justify itself as a game.

The visual presentation of Solitude would be its greatest asset.  The calm moments of the game are begging for a photo to be postmarked.  Even with screenshots, it’s easy to implicitly know we’re talking about an indie game™; and yet, there’s just enough visual distinction too.  Those few moments where the water magically retreats from part of the sunken city, freeing Kay to venture on foot, feel like appropriate approximations of a quiet European market (this German studio finding obvious inspiration).  Combine this with the minute details, the softer color palette, and the interesting contrast with its thematically darker areas and it’s easy to foresee it netting end-of-year nominations in art design. 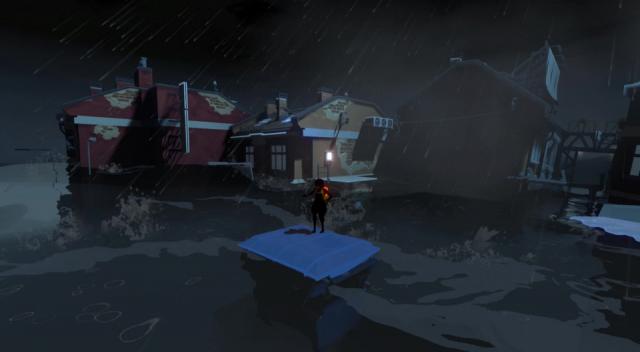 Such will likely not be the case in regards to sound.  Naturally, the soundtrack hits the expected rhythms of the emotional indie game today.  The sincere musical notes playing during any cheesy line delivery tells you the game’s intentions.  But Solitude may be 2019’s quintessential example of when voice acting can get in the way of your intended message.  It’s tough for me to say if Kay’s voice actor (Miriam Jud) has any experience with acting, at least in the English language.  There’s a compounding problem as a result: dramatic moments that don’t land because of the writing are emphasized more due to strained line delivery.  Learn to excise what’s unnecessary!

Solitude is more of a one-and-done experience too, unless having a vested interest in collectibles.  The first is less a ‘collectible’ and more an achievement of shooing seagulls who’re just minding their own business.  I don’t understand why I’m compelled to act like a jerk.  The noteworthy collectibles are the messages in a bottle.  They provide more background about these areas and—for once—subtly remind you this isn’t Kay’s first trip through this lonely world.  Would’ve been nice if they were the only focus and supplemented this place with more ancillary details.

In conclusion, this next entry in the ‘EA Originals’ catalogue has a fascinating premise but doesn’t build upon it in a meaningful way.  From Hellblade: Senua’s Sacrifice to The Town of Light, there’s a rising tide of stimulating game concepts examining mental health, which I applaud, but that alone does not a great game make.  The title Sea of Solitude is inappropriate.  Whether in respect of its derivative gameplay structure or the bumper-sticker approach to an otherwise-sincere message, it doesn’t go any deeper than the wading pool.