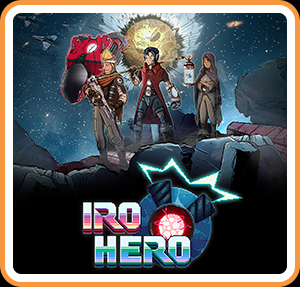 In its brief time on the market, Switch has seen quite a few classic shmup ports — among them Blazing Star, Gunbird 2, and Ikaruga — but few homegrown arcade shooters. Enter Iro Hero, a vertical scrolling shoot 'em up with a retro aesthetic, that debuted on Nintendo's hybrid system (and subsequently arrived on Steam). It wears its old-school inspiration on its sleeve, even as it demonstrates some inventiveness with a nifty four-color polarity system. Be warned, though: like its predecessors, Iro Hero is tough as nails, and a poor match for fans looking for a casual, relaxing space shooter.

Unlike many shmups, Iro Hero has a significant story, even if it's told a bit clumsily. In the year 2306, a century after visiting aliens called the Nyagu taught humans how to draw electricity from within their bodies, unscrupulous companies are farming people as an energy source. As Iro, a young pilot whose mother goes missing in an energy farm, players will uncover the truth in a decades-old conspiracy and join the resistance in a vast, solar war. 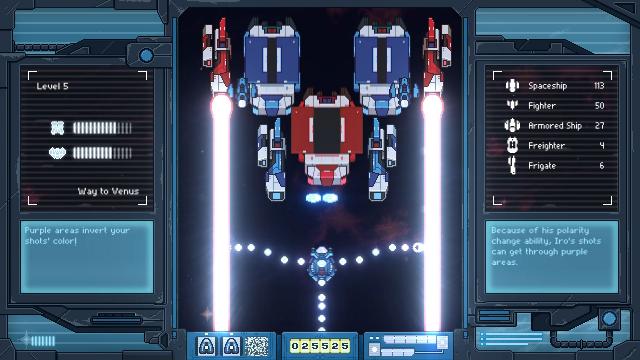 The developers at Spanish studio Artax Games tell their story in two ways: through static storyboards in between levels and via written dialogue mid-mission. Neither is especially effective. The storyboards are crudely drawn, and the dialogue sequences are unfortunately difficult to follow as they take place on the margins of the screen during flight; your eyes can only focus on one point of interest at a time, after all. Iro Hero would do better to include background information by way of data modules in the mission select screen, à la Tyrian 2000. Still, the inclusion of a provocative narrative in a genre traditionally bereft of them is welcome.

In any event, the real draw in Iro Hero is its blistering, back-breaking arcade action. While the game owes its mechanics to many previous-gen shooters, it shares a special affinity with Ikaruga, with its polarity mechanic and bullet hellscape. Players will pilot Iro's ship through nine vertically-scrolling stages, flipping back and forth between red and blue polarity. As a blue fighter, Iro can absorb blue bullets to power his special weapons and destroy red vessels; as a red fighter, he can do the opposite. 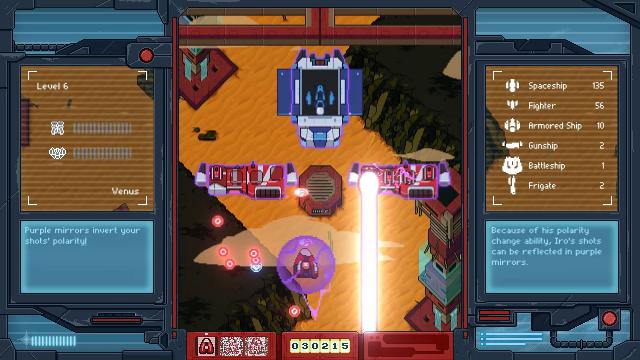 The polarity mechanic is a tried-and-true system that works wonderfully in Iro Hero thanks to clever, inventive level and enemy designs. While the game initially introduces shoot 'em up mainstays like dive-bombing fighters and large gunships that fire solid beams of energy, it inserts in later levels colored barriers, reflective surfaces, and purple vessels that are immune to both blue and red bullets. Navigating these environmental hazards and deciphering how to exploit enemy weaknesses requires equal parts mental and physical dexterity. As a result, just as in Ikaruga, Iro Hero becomes something of a shooter-puzzle hybrid.

Simply surviving in Iro Hero is a tall task, but luckily the title features several game modes, some of which were missing when the game launched in Europe and Japan last month. Arcade mode is the original, unforgiving vision for the game. There are no continues but at the end of each level you can exchange points for lost lives. If you manage to best it, you'll unlock 1CC mode: no continues, no buying lives (note that only high scores from Arcade and 1CC will show up on online leaderboards).

Normal mode is a little more accessible. Here you can swap points for lives and you also gain three credits to fight another day. Story mode is the easiest and, arguably, most necessary of the bunch — without it Iro Hero would fall from "good" to merely "decent." In Story, once you finish a level, the next level is unlocked. Basically, this is a means to enjoy the story, practice on each level, and, importantly, experience the full game without memorizing nine straight stages. It's an essential concession in a game that is supremely punishing and unforgiving. 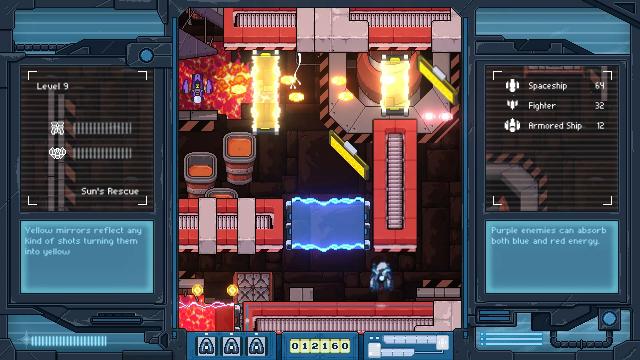 In terms of visuals, Iro Hero boasts a handsome retro pixel look with some surprisingly detailed backgrounds. While it's not as fetching as Switch shooters Ikaruga or Danmaku Unlimited 3, it's colorful and clean and, most crucially, comprehensible; rarely will you lose your ship in the chaos on screen. The music is quite nice too, with catchy tracks that match the intensity of the game's action.

Over the last 16 months, Switch has become a haven for classic shmups. While Iro Hero might not be a new classic, it's still a quality entry in the genre — thanks to thoughtful level design, frenetic arcade action, a smartly-implemented polarity mechanic, and crisp, clean graphics. The game's story is rather meek, and its punishing difficulty a potential roadblock for shoot 'em up rookies, but on balance Iro Hero earns its wings.

This review is based on a digital copy of Iro Hero for the NS, provided by the publisher.