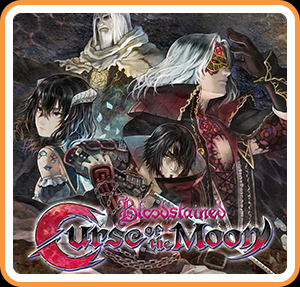 Bloodstained: Curse of the Moon (NS)

Bloodstained: Curse of the Moon (NS)

Castlevania in all but name.

Even if Bloodstained: Ritual of the Night fails to recapture the glory of Symphony of the Night and other open-ended Castlevania games, the Kickstarter campaign that funded it has brought into the world a gem of a game — Bloodstained: Curse of the Moon. Promised as a stretch goal for the 2015 Kickstarter that bankrolled Ritual of the Night, Curse of the Moon is an 8-bit action-platformer inspired by Castlevania III. It features several playable characters, a handful of modes and alternate endings, tight level design, dramatic boss battles, and a few quality of life improvements over its retro muse. The only problem: it's on the short and derivative side.

The story follows Zangetsu, a master swordsman on the hunt for the demons that cursed him. One night, he senses the presence of a powerful demon, and sets out to spill blood once again. 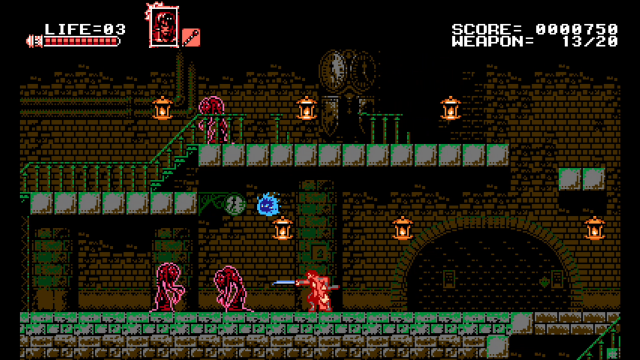 Curse of the Moon channels the spirit of the NES Castlevania games, sometimes slavishly. Players will guide Zangetsu through linear side-scrolling stages, collecting sub-weapons, fighting monsters, and, at the end of each stage, facing off against a powerful boss creature. Everything works well, thanks to developer Inti Creates' proficiency with action-platformers. Character movement is smooth and responsive; monsters appear in a variety of shapes, sizes, and attack formations; and level designs are efficient and varied, with plenty of opportunities for horizontal and vertical exploration.

The twist — and it's here where the influence of Castlevania III is felt most powerfully — is that every stage has several branching paths, some of which are accessible only by one of three supporting characters that join the traveling swordsman on his bloody quest. Fighting alongside Zangetsu are Miriam, a whip-wielding woman and star of the upcoming Ritual of the Night; Alfred, an alchemist; and Gebel, a mysterious stranger who seems to mistrust humans and demons alike. 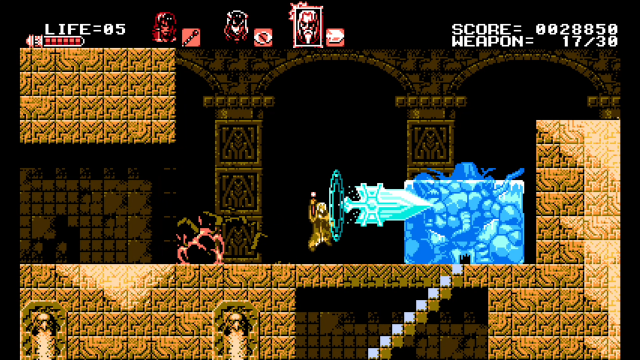 Four playable characters and multiple paths per stage add a lot of variety and replay value to Curse of the Moon. After you recruit a new character at the end of a stage, you will be able to switch instantaneously to him or her. Each ally has a different max HP, a unique attack style, and specific sub-weapons. Miriam, for example, is the nimblest of the group and her whip has the longest horizontal range. Alfred sports a tiny health bar and limited range, but his magical sub-weapons are extremely powerful. Gebel doesn't have a sub-weapon, but he can use collected weapon points to transform into a stained-glass bat and traverse bottomless pits.

Switching among these four heroes and taking advantage of their distinct skills to vanquish enemies and reach far-flung passageways is a big part of what makes the game work. You'll have to be careful, however, as once one of the heroes expires, he or she will be unavailable until the entire party dies or an end-of-level boss is defeated. 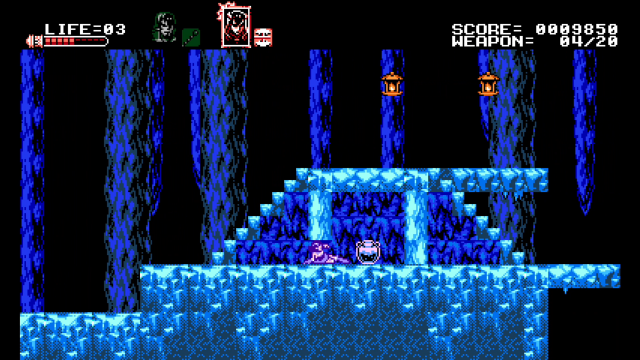 Speaking of bosses, in Curse of the Moon they're consistently interesting and challenging — what else would you expect from Inti Creates? There's Glutton Train, a possessed furnace that scoops up handfuls of coal; Valefor, a demonic gold hoarder who summons a wall of gold coins to flatten his rivals; and Valac, a two-headed dragon covered in razor-sharp teeth; among several others. While Inti Creates apes Castlevania for much of Curse of the Moon, in the boss department the studio is much more original; these aren't mere retreads of Phantom Bat, Medusa, or Death, but rather original creations that feel like a mix between classic Castlevania and the developer's other properties, particularly Azure Striker Gunvolt.

Even after you've dispatched all the game's bosses — an initial run will take between 90 and 150 minutes, paltry on its own — there is a lot more to see and do. You can play through normal mode several times, choosing to recruit or slay certain companions, to unlock several alternate endings. Depending on your actions, you will unlock "Nightmare Mode," which features bosses with new special attacks and a different final level, or "Ultimate Mode," in which Zangetsu earns a new suite of skills and powers. There's also an unlockable Boss Rush mode. Thus, what is at first a brief two hour experience could, in theory, last as long as seven to eight hours — not bad at all for a $10 title. In addition, many of these modes can be played in one of two difficulty settings: veteran, a classic Castlevania experience; and casual, which grants infinite lives and turns off knockback. 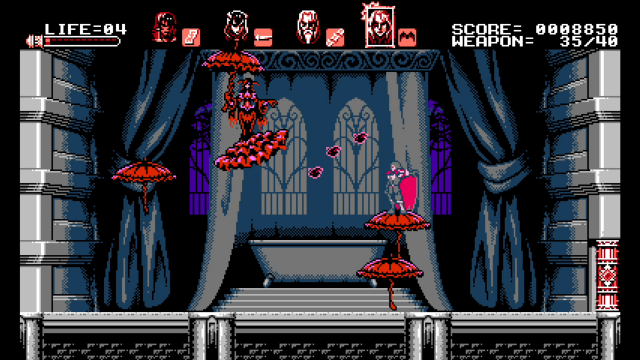 Curse of the Moon aims for a classic 8-bit style, and delivers in spades. It's basically a great-looking NES game, minus the imperfections of the era. The soundtrack, too, is a throwback in the best way. Many of the mono tunes are catchy and nostalgic; some, like "Blasphemy Unto Heaven," are instant classics.

It's not Ritual of the Night, the much-anticipated Metroidvania from Koji Igarashi, but Curse of the Moon is a lot of fun regardless. While the game is relatively short and sticks too closely to the NES Castlevania mold, refusing to summon many new ideas or mechanics, it's undeniably entertaining and challenging. Its action-platform gameplay is satisfying, its boss battles engaging, and its opportunities for exploration and rewards for repeat playthroughs refreshing. The wait for Ritual just got a heck of a lot easier.

This review is based on a digital copy of Bloodstained: Curse of the Moon for the NS, provided by the publisher.