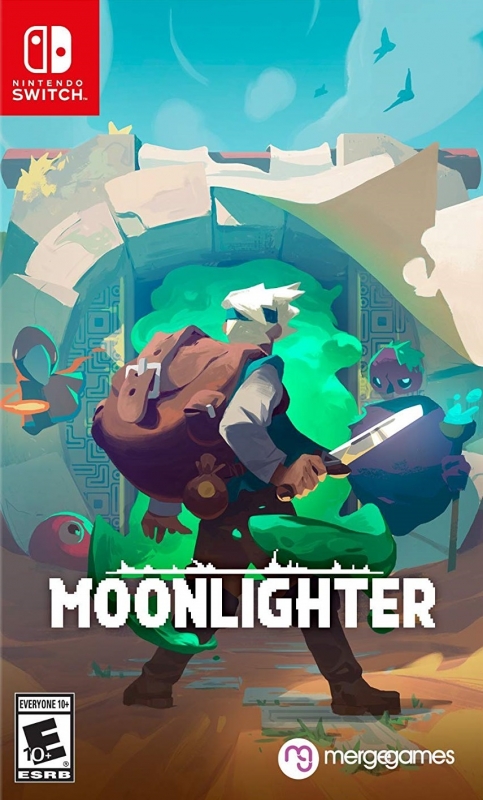 Even video game heroes sometimes need an escape from the tedium of the real world. Such is the premise of Moonlighter, a top-down rogue-like/shopkeeper simulator, which plays something like Binding of Isaac by way of Economics 101. It's a gorgeous action game with an addictive gameplay loop, a few welcome quality-of-life features, and some satisfactory high-stakes combat that's let down slightly by repetitive dungeons and the odd technical hitch.

Moonlighter takes place in a sleepy village called Rynoka, where years ago several portals leading to mysterious dungeons opened up on the outskirts of town. After the initial gold rush—adventurers and merchants flocked to Rynoka as a result of the riches within the four dungeons—the portals were shut, due to some violent deaths. A young man, Will, who inherited his father's item shop, the titular Moonlighter, dreams of the mysteries inside the four dungeons despite the danger. So, while he maintains his family legacy at day by selling items, he pursues his personal goals at night by stealing into dangerous dungeons. 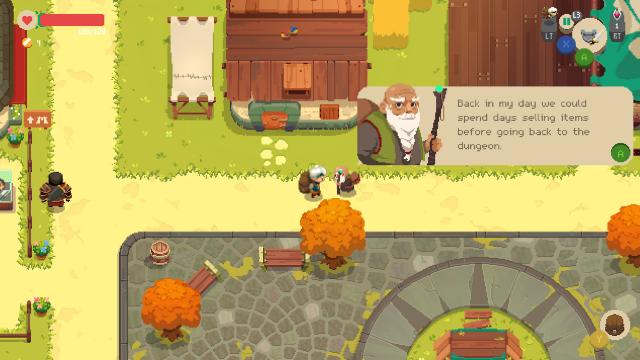 The story in Moonlighter is modest but effective. Will's purpose and the history of Rynoka are clear and comprehensible, left-behind journals inside dungeons hint at a greater mythology, and new townspeople and shops create a sense of forward progress. That said, some more interesting NPCs (with additional lines of dialogue) would make the game world feel more alive and dynamic.

Story is secondary to dungeon-crawling and shop upkeep, in any event. These two pillars support Moonlighter, and feed into an elegant, addictive gameplay loop. Essentially, players controlling the would-be hero Will dive into a dungeon at night, slay monsters, collect materials, and raid treasure chests, then escape back to civilization with loot in tow. When the sun rises, Will sells materials to the citizens of Rynoka, then uses the proceeds to buy better armor, enchant weapons, and purchase healing potions—all of which help him dive deeper into the dungeon the following night. 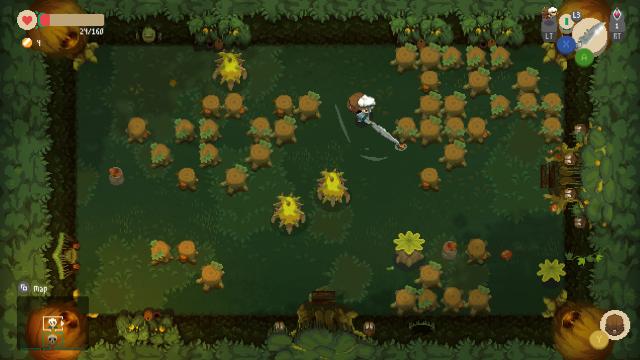 Dungeon diving is the game's highlight, both structurally and mechanically. Each themed dungeon is built along a top-down 2D chambered grid, not unlike the original The Legend of Zelda or The Binding of Isaac. Some paths lead to dead ends, while others will pave the way to a new level, and eventually an end boss. In true rogue-lite fashion, Moonlighter submits to its players a new dungeon layout (with new enemies and treasure) each time they enter.

While these randomly-generated levels are not as artful as pre-determined stages, they do inject into the game a dose of unpredictability—important because Moonlighter, despite all its positives, is a repetitive, grindy game. You'll be entering and exiting the same four dungeons again and again, facing off against similar beasts, and discovering (and re-discovering) identical journals and items. Just as with Dead Cells, the rogue-lite randomness in Moonlighter is no replacement for a tailor-made, immutable single-player campaign. 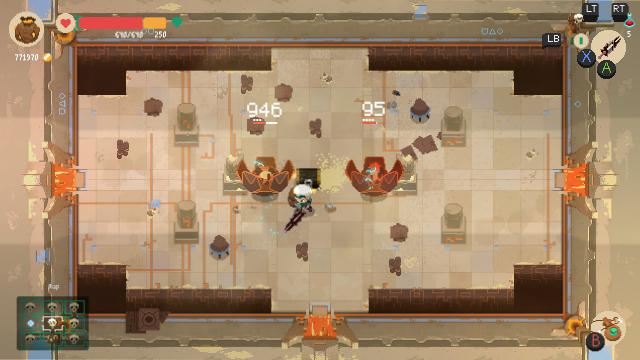 Still, just as in Dead Cells, Moonlighter rises above the repetition by way of satisfying combat. Will can equip two weapons at a time—these include swords and shields, big swords, spears, gloves, and bows—and swap back and forth with the press of the L button. Using the A button, players can deploy their equipped weapon's primary attack, and with B they can activate a secondary attack. The primary function of the spear, for example, is a traditional single thrust attack, where the secondary move is a slower but more powerful forward charge. In addition, Will owns a dodge move, which allows him to roll to safety, duck under enemy attacks and projectiles, and tumble across gaps. With snappy controls, fluid fighting, and an intuitive, enjoyable dodge-and-attack cadence, combat in Moonlighter is great fun.

The game's collection of beasts, imps, and mechanical monstrosities that haunt each dungeon further enhances the mechanics of combat. Some enemies, which home in on Will, are vulnerable only after colliding with a solid object and knocking themselves unconscious. Others have impenetrable front armor and must be slain from the back, while still others fire projectiles. The most dastardly of all glom on to the shopkeeper-cum-spelunker and hold him in place, helpless, as nearby monsters converge. Reacting smartly to each enemy attack and deploying the right weapon for the job is the best way to survive each subterranean gauntlet. 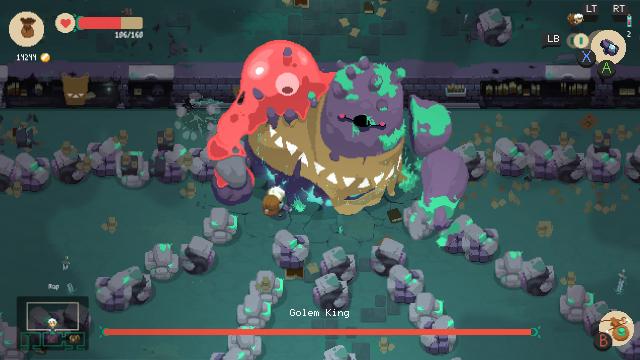 Survival is made easier due to some refreshing rogue-lite concessions, courtesy of developer Digital Sun. Death might be permanent in Moonlighter, erasing all progress and accumulated loot (minus a handful of items carried on Will's person), but the game offers a host of quality-of-life features that make it less common and less painful. The most essential feature is the merchant pendant, which allows Will to transport himself out of a dungeon (for a fee) when the risk of forward progress is too high. The dungeon will deposit the would-be hero near his shop, with all his wealth intact.

Two other relics make life more manageable in the darkest depths of Rynoka's dungeons. A mirror, first discovered on the second floor of the Golem Dungeon, prompts Will to sell items immediately from his inventory, without returning to his shop—although the price per item is noticeably lower than in town. Even so, the freedom to unburden yourself of low-priced space-consuming loot to create slots for luxury items is a huge boon. The second item is the catalyst, a more advanced version of the pendant that creates a two-way bridge between the dungeon and town. Although the use of this artifact is much more costly, it provides Will with the chance to pause his progress mid-dungeon, return to Rynoka, replenish his heath potions and upgrade his armor, then return to his mission. Thanks to these items and others, Digital Sun has removed much of the sadism from the rogue-lite formula. 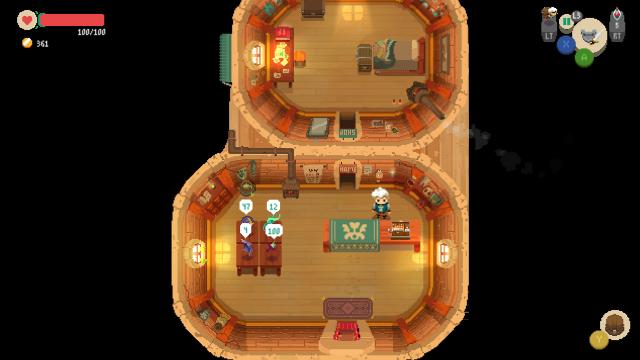 Dungeon crawling is but half of the Moonlighter equation. The other is shop supervision, which takes place during daylight hours. Overall, the game finds a nice middle ground between complex micro-management and thoughtless, auto-pilot economics. It works thusly: Will puts his dungeon spoils on display in Moonlighter, opens for business, and sells each item to the townspeople and traveling merchants who arrive at random. If a potential customer sees an item priced to his liking, a large happy face will appear above him. Conversely, if the price is too rich, expect to see a frustrated or angry face. It's up to players to price each item accordingly, and to manage supply and demand. Flood the market with too many whetstones, for example, and people will stop buying them, or at least spend less money per unit.

As you gather more cash and begin to topple dungeon bosses, you'll be able to make your mark on Moonlighter and Rynoka at large. Using a billboard in the center of town, Will can expand his shop's footprint; install tip jars, cash registers, and sale boxes; and even add a quest point to take on customer requests. He can also invite into the village other shopkeepers, who begin to sell unique items. Vulcan's Forge provides new weapons, The Wooden Hat sells potions and enchantments, Le Retailer offers items found only in dungeons, etc. 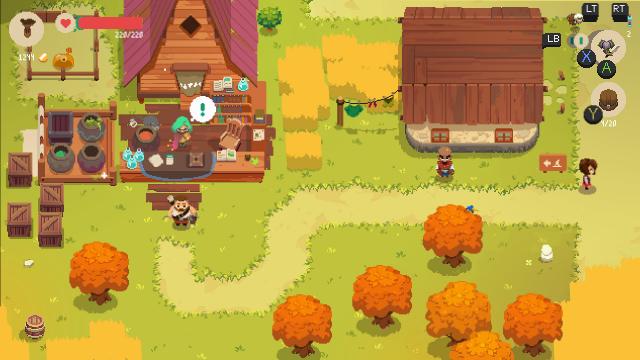 While the business macro-game in Moonlighter doesn't add a great deal of value—the game wouldn't score poorly as a result of its absence—it's a nifty, accessible way to punctuate each dungeon dive, and to strengthen the narrative/emotional bond between the player and game world.

That game world absolutely leaps off the screen, thanks to some stunning, detailed, dynamic artwork. Everything in the game is dripping in detail, awash in textures, and almost tactile—like you could reach into your Switch and touch it. Music by David Fenn (Titan Souls) is likewise lovely. He deploys acoustic guitar, piano, and flute to great effect. It's especially impressive how the songs that pop up in each dungeon play on its theme. "Haywire," from the Tech Dungeon, is robotic and digitized, while "Botanical Brigade," of the Forest Dungeon, uses wood instruments and playful riffs to conjure images of a plant-based platoon on the march. 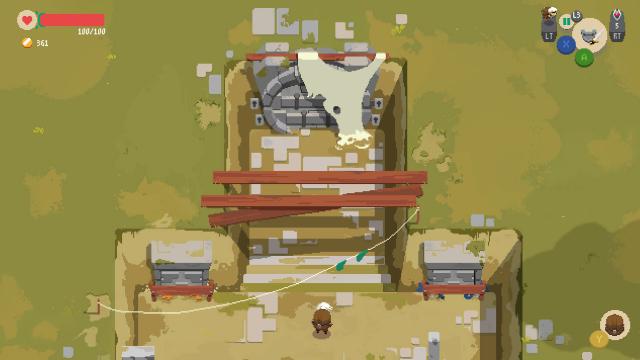 Despite its auditory and graphical highlights, the game suffers from some technical bumps, including the odd soft lock situation or even a system-wide error, which tend to occur at the very worst times. Hopefully a patch will iron out these rare-but-discouraging glitches.

In the end, Will is right: exploring dungeons and collecting loot is more interesting than tending shop. Still, both spheres of this game are interesting, rewarding, and fun. While repetition permeates the overall process—attacking the same dungeons and selling the same treasure day after day, night after night can turn tiresome—Moonlighter's combat, art, quality-of-life fixtures, and addictive gameplay loop make for an easy recommendation.

This review is based on a digital copy of Moonlighter for the NS, provided by the publisher.