A stylistic platformer that rides the line between innovation and classic 2D sidescrolling gameplay.

The 2D platformer is a genre in danger of growing a bit stale. Thankfully, Bishop Games’ Light Fall proves you can still work within the parameters of a borderline worn-out and overpopulated genre, while still creating an artful and entertaining platforming experience. Light Fall provides an artistic sensibility that’s both simple and enriching, along with some downright fun and unique gameplay that’s further solidified by unorthodox yet sound mechanics. 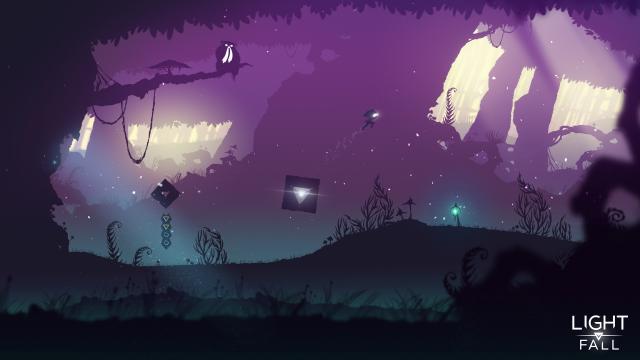 The layers of dark, shadowy elements juxtaposed with the colorful backgrounds of the world of Numbra help the visuals pop and prove to be a nice balance of darkness and light, color and shadow. The game does a lot with a little in this regard, and the 4 major environments throughout manage to feel distinct and relatively detailed despite their flat, silhouetted aesthetic. Fluid animation and a rich orchestral and classical soundtrack further paint a serenading atmosphere that draws you in. Fans of Limbo might recognise the cell-shaded silhouette art style prominent throughout; and while there are admittedly plenty of similarities, the interesting and satisfying gameplay is really what stands out and allows Light Fall to shine.

Bishop Games also dials back the heavy puzzle elements Limbo embraced, settling for lighter puzzle portions balanced with more traditional, fast-paced platforming gameplay. The closest mechanical comparison I can make might be the co-op portion of New Super Mario Bros. U, where much of the gameplay involves one player generating platforms beneath the feet of a player-controlled Mario and friends. 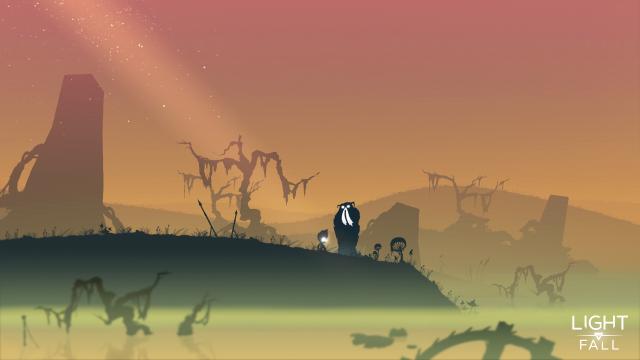 Light Fall takes this gimmick and runs with it full throttle. Most of the gameplay essentially revolves around the rapid-fire creation of “shadow cores," instantly creating unique platforming dynamics. Shadow cores are magical boxes which can be summoned four at a time, before the player must hit the ground to refresh their stock. They can be utilized in a number of ways but mainly as makeshift platforms to traverse gaping pits, fields of crystalline spikes, and other hazards that stand in your way. As you progress you also gain a more versatile palette of these cores. These include boxes to hold in front of you as a shield and hoppable wall, platforms you can place above you, and even keys that trigger various events.

While these mechanics seem odd and jarring upon first glance, they're implemented surprisingly smoothly and seamlessly throughout. Platforms are simple to draw up with the mere push of a button, and even glide with you a bit as you run, ensuring your running momentum won’t often lead to accidental deaths by overshooting them. Of course, the keyboard and mouse configuration makes this process a bit trickier, but the use of a supported controller makes everything click a lot faster. So plug in that Xbox One controller and go hog wild with your shadow cores as you get lost in the shadow lands of Numbra. 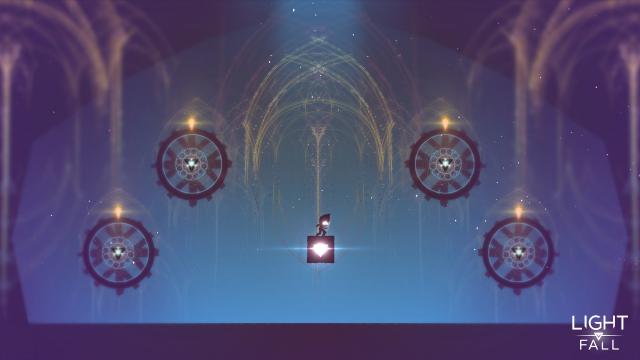 Light Fall certainly isn’t shy about throwing a ton of exposition at you throughout your journey. For a relatively short game - clocking in at 5 or 6 hours - there is a wealth of backstory staggered out regarding the game's strange, gloomy world and its inhabitants. This is done through some detailed still-image cutscenes, collectible crystals that unlock scrolling text descriptions, and plenty of well-acted narration from your wise-cracking owl companion named Stryx. I found myself resisting the urge to skip through many narrative bits, as they can slow the pace of the gameplay at times, and contain some typical “redeem the world from evil alien machines” tropes. Still, for those craving a juicy story, there is plenty to sink your teeth into to help further immerse you into the world of Numbra.

The amount of content Light Fall provides might be one of the few blemishes in an otherwise well-rounded and enjoyable platforming experience. There are four acts, each containing three or four stages (and with how quickly you can glide through areas by hopping across generated platforms, you’ll likely find your journey comes to an end a bit too soon). Still, there are collectables for completionists, and a hard mode chock full of more punishing obstacles for masochists. 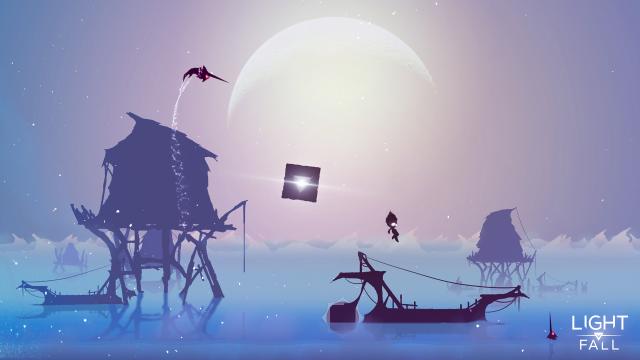 There’s also my personal favorite inclusion - a speed run mode complete with online leaderboards and ghosts of real players that you’re able to race against. This is the primary source of the game’s replay value, and the area I can see myself returning to, as I try to work my way towards the top of the boards and beat my previous times. For my money, the emphasis on gliding through each stage as quickly as possible Sonic-style is the essence of Light Fall’s enjoyment, anyway. The drawn-out narrative and the few cumbersome puzzle sections? Not so much.

One could perhaps nitpick about the relative ease and chill nature of the gameplay, as your shadow cores can often bail you out of trouble a bit too easily, and the environments are sparsely populated with actual enemies. I really only struggled during the final act of the game, including an annoyingly-cumbersome final boss fight that all but required a good deal of trial and error. The sheer linearity can oversimplify things a touch, though there are some diverging paths from time to time to give some sense of player freedom. The game’s hard mode does make things a fair bit more challenging too, and there are segments where checkpoints are scarce, giving me moments of gaming-anxiety. You're even thrown into a few brief segments where the game deprives you of core usage, falling back to a truly oldschool and gritty platforming experience. 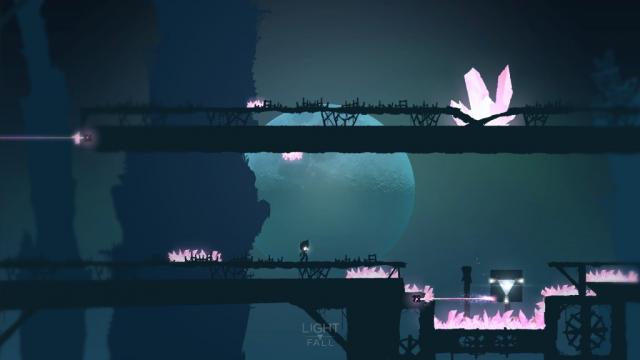 Despite my previous notion of being somewhat burnt out on the platforming genre, Light Fall still managed to grab me, and it kept me engaged throughout. Bishop Games has excelled in most key areas; from the controls, to the appealing art style, to the steady learning curve. Perhaps most notably, though, the developer has provided an enjoyable balance of innovation and fundamental oldschool platforming gameplay with its charming box-hopping platformer.