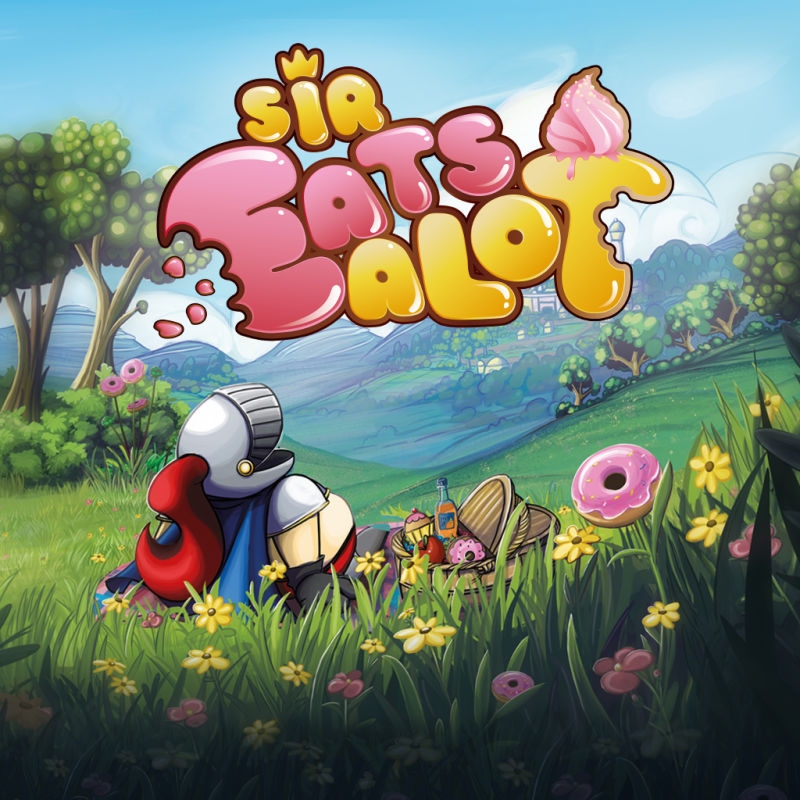 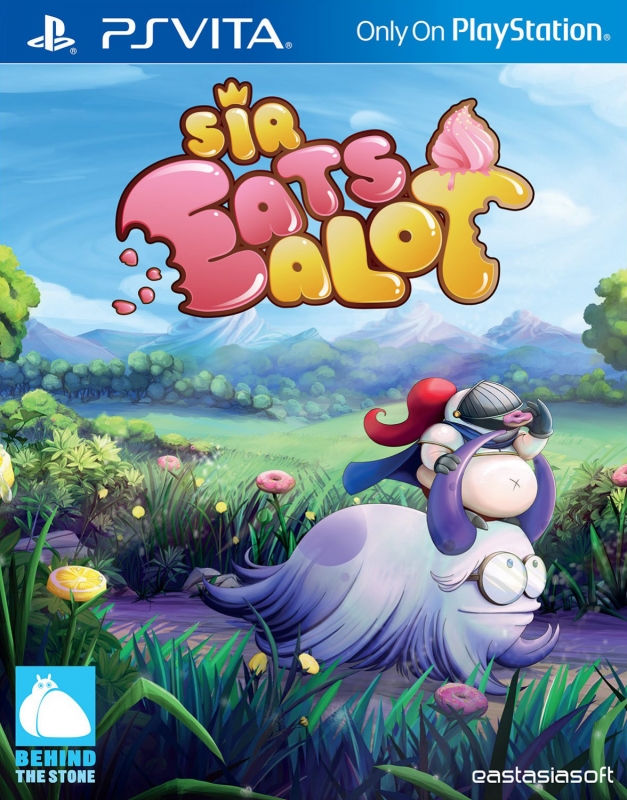 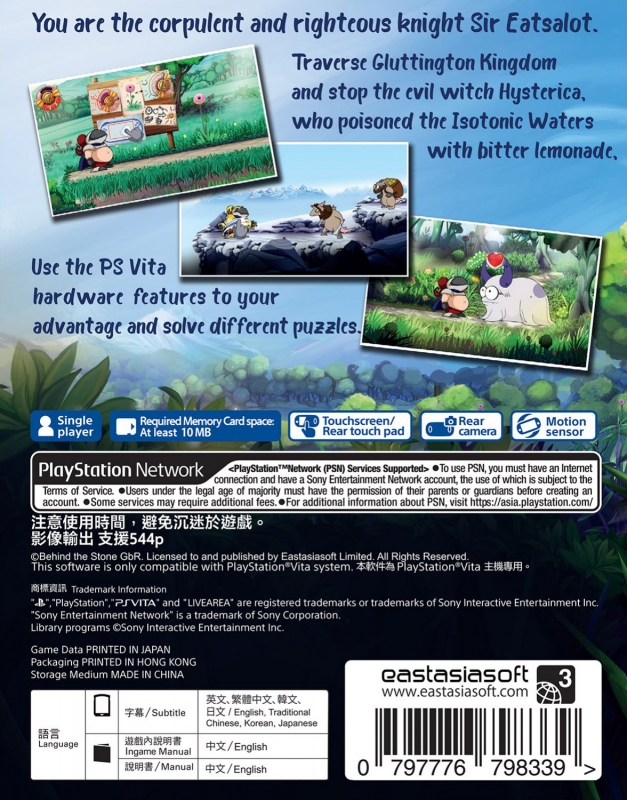 A great showcase of how to use the Vita's unique inputs to create clever mechanics.

The Vita launched in 2011 with a slew of unique inputs, ranging from front and rear touch screens to cameras and microphones. Very few games attempted to use these control methods and even fewer managed to pull it off successfully enough to feel natural - but Sir Eatsalot does, in a fantastic example of 'feels built specifically for Vita', arguably the first since Severed in 2016. The rest of the game's design doesn't quite live up to this lofty praise, but there's still a smart if sometimes frustrating adventure underneath. 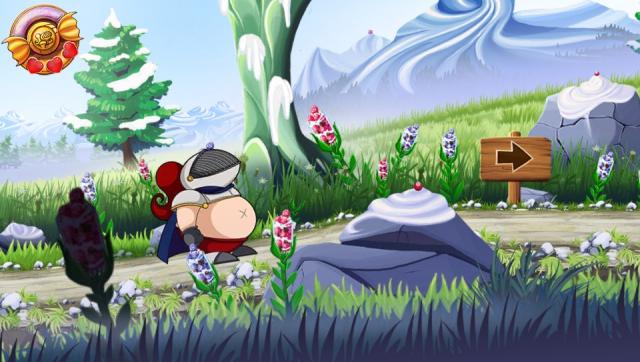 You're cast as the titular Sir Eatsalot, a chubby knight tasked by the King of Gluttington with stopping the evil witch Hysterica and her army of rat warriors from poisoning his land with... sour lemonade. The game embraces its foodie theme extremely well as you'll run through various different zones littered with foodstuffs ranging from cherries to muffins to tacos, creating a visually unique and memorable world that it's easy to get swept up in.

This level of immersion is assisted by the beautifully drawn graphics that are bursting with detail and character. Each area you run through is chock full of little details, ranging from plants and bushes that can be touched (via the screen) to dropped healing foods, to little woodland creatures hiding in the scenery that run away when they see movement. Character animations are also top-notch - Sir Eatsalot's belly wobbles while he walks, enemy rats swing their swords with gusto, and Hysterica splutters as she smokes yet another cigarette and screams at her underlings. For a 2D game, it does a fantastic job of making its world feel alive. 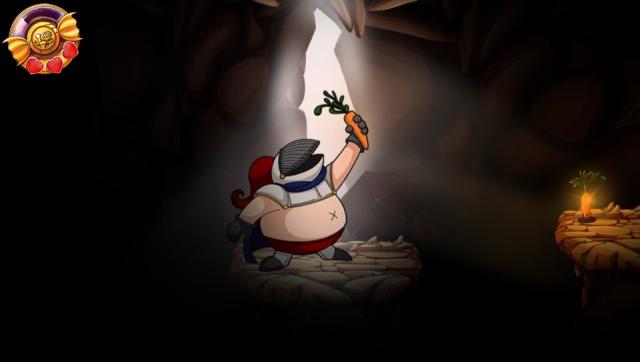 Gameplay is more of a mixed bag, although it is still laden with good ideas. Being a Knight, Sir Eatsalot has access to a sword and shield that can be used to attack and defend, plus he can run small distances (if he has stamina, which is refilled by eating). He's not the easiest character to control unfortunately, thanks to his plodding pace, stamina meter which depletes far too quickly, and inability to pull off simple manoeuvres like jumping and attacking at the same time.

Throughout the journey, you'll come across various different ways of interacting with the game and these are undoubtedly the high point. Early on, you're given little panels that explain the controls to you - tap the rear touch to lower bridges, rub the front screen to clean cheese off ladders, etc. Then, after a certain point, Sir Eatsalot stops holding your hand and forces you to figure things out for yourself. For example, I was stuck on a platforming puzzle involving bear traps until I stopped and figured it was impossible the way I was doing it, which caused me to work out that I could press the front touch screen to trigger the traps and progress. Little ideas like this are scattered throughout the title, ranging from knocking logs off walls, to cutting down vines, and it all works really well. 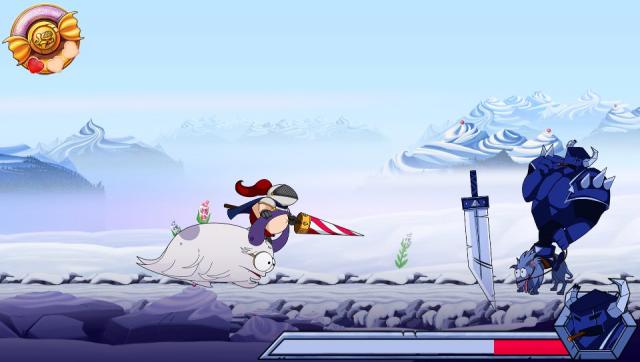 In fact, Sir Eatsalot is a very interactive game in general - the majority of the scenery can be shaken to reveal health and stamina restoring items and you're encouraged to look around to find hidden secrets. There's also a neat sticker-collecting mini-game involving tracing the outlines of creatures you come across (reminiscent of Tearaway), as well as some clever boss battles such as a jousting fight that involves swiping the front touch to attack, defend, or jump. They're nothing major, but are nearly all smart ideas that feel natural on the Vita hardware.

While the game is filled with clever quirks and unique inputs, it doesn't quite nail the gameplay basics in the same way. Aside from the aforementioned issues with the slow movement speed (even if it is thematically fitting) and stamina meter, the title's biggest offence is the way it constantly breaks up the gameplay flow with dialogue. Sir Eatsalot is often happy to break away to a scene showing Hysterica scolding her minions, and the main character regularly engages in chatter with various creatures he encounters, and this occurs a little too often for my liking. I did find myself engaged with the plot after a while, but it definitely could've been told in a more concise way. 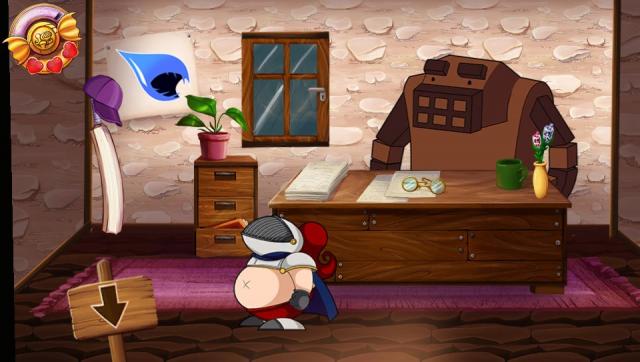 When you do get back into the gameplay, you can expect simplistic 2D platforming and puzzle solving as well as minor combat sections. Platforming sadly isn't the most precise thanks to some odd edges and hit boxes (also an issue with the combat), although a handy running jump helps make up the difference. The puzzles range from simple lever-pulling and valve-turning to more complex ideas - there are a couple of obtuse sections where it's not entirely obvious how you're supposed to interact with a certain object though, which I found a little bit frustrating (prime example being towards the end of the game where you're given a pen and have to draw on a painting, exactly the opposite of the tracing you're expected to do previously, with no hint that it's anything different).

Aside from platforming and puzzle segments, you'll also have numerous sections that I can only really describe as 'adventure', somewhat in the vein of a point 'n' click. These involve you speaking to the residents of Gluttington and completing tasks ranging from delivering cocoa beans to helping tidy up a town - while the actual objectives can become a bit mundane and regularly involve back-tracking, they add greatly to the world-building and by the time I was done with Sir Eatsalot I had fond memories of my time helping the broccoli stag free imprisoned creatures or aiding the chocolate golems with their mining (the writing is surprisingly on-point, although it tries a little too hard with the humour sometimes). 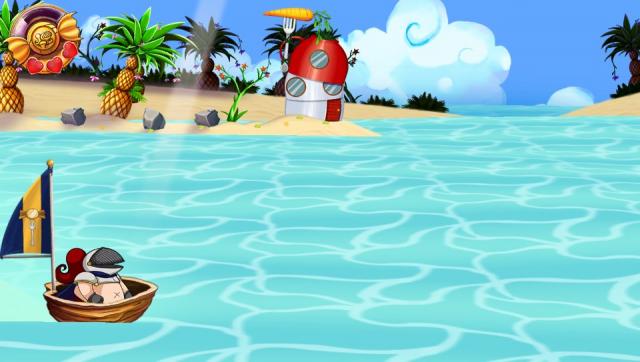 It is worth noting that I encountered a few technical issues along the way, such as a bug where I warped to the end of a zone when taking a screenshot at the moment an enemy attacked me (which was fairly minor and only happened twice). More serious was an audio issue where sound effects cut out randomly only to come back a few areas later.

Still, I enjoyed my time with Sir Eatsalot and can say that I really appreciate just how much effort the team at Behind the Stone have put into crafting a game that feels so perfectly at home on Vita, as well as the cosy, loveable world it's set in. It'll take you a good 7-8 hours to see everything too, and there's reason to return to hunt secrets and new areas, although the lack of a world map hurts a little with the backtracking.

This review is based on a digital copy of Sir Eatsalot for the PSV, provided by the publisher.