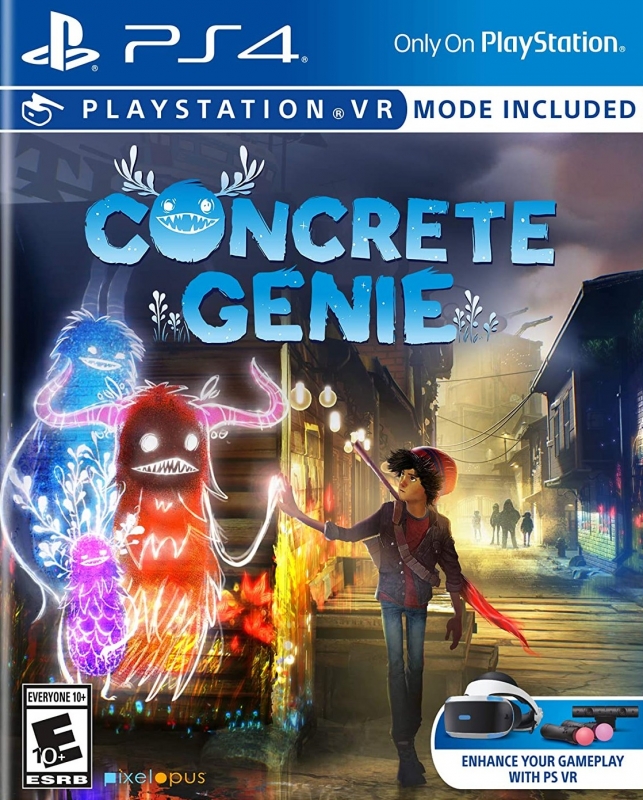 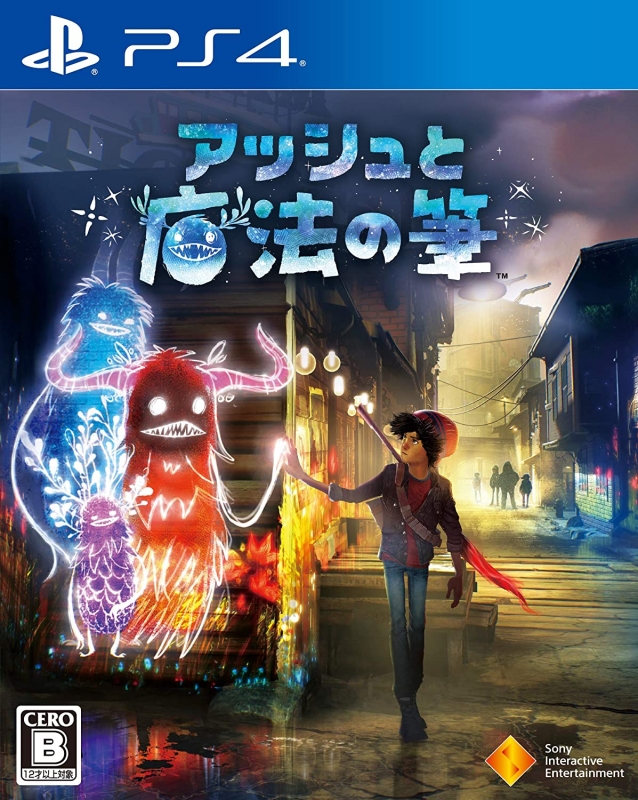 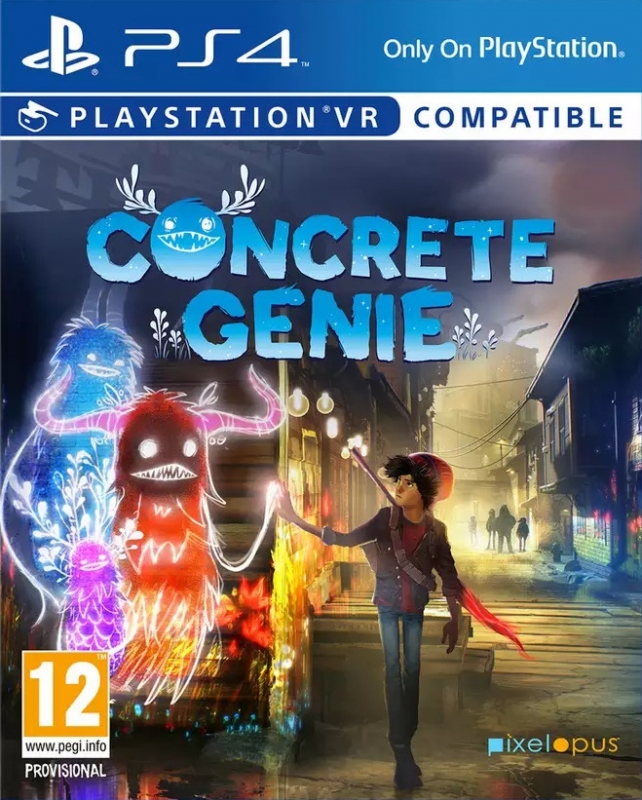 Ash to Mahou no Fude

Whereas wider anticipation was built up for the brain-splattering exercises in Days Gone or Hideo Kojima’s next weird exercise in Death Stranding, PixelOpus’ sophomore effort is the one PlayStation exclusive I’ve been most hyped to play.  Odd, I know.  Even stranger when considered that their well-intentioned first game, Entwined, didn’t quite connect with me either.  But it’s something about their presentation and a unique hook that captures my attention more easily than the recycled—though typically polished—cinematic template Sony is apt at utilizing; even so, Concrete Genie still exemplifies this young studio’s penchant of under-developing their potent & artistically-minded ideas.

You take control of Ash, a young sketch artist who looks like he's tumbled through a local Hollister.  Questionable attire aside, he’s an endearing kid, simply drawing what comes to mind while traversing Denska, the once-thriving fishing village that's now abandoned.  What’s left are a pack of young vagrants roaming the streets and this black-and-purple goop whose forms vary between oily masses floating above the sea to thorny manifestations that create paint barriers or roadblocks.  Those bullies intimidate Ash for a bit, tear up his sketchbook, and throw him in a trolley going to the lighthouse.  These circumstances eventually lead to him acquiring a magical paintbrush which can render murals that come alive - literally “Genies” which assist along the way. 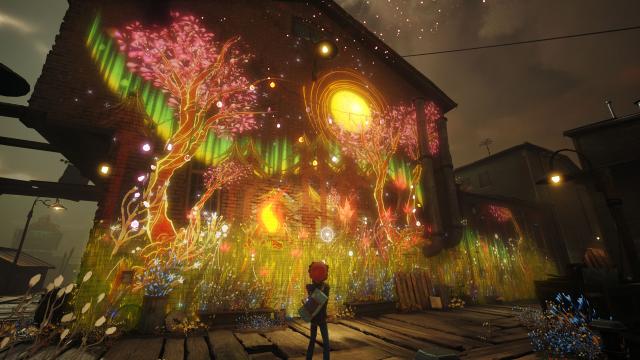 For anyone familiar with these types of empathetic storylines concerning good-guy-versus-bullies there aren't many surprises.  Yet that doesn’t take away from how engaging it is, especially in respect to its pacing.  It typically remains economical with its cutscenes and its varied presentation does wonders in eliciting the intended emotion.  Each bully’s backstory transitions into a 30 second sketched animation smattered with dour visual hues; in contrast, the first time we see Ash have a similar recollection it reveals a warmer atmosphere.  Short as they are, these touches do so much more than they would if they were in-engine cutscenes but with a black-and-white filter.

The story of Denska is not as thematically consistent, however.  There are roughly a dozen newspaper stories to disinter throughout this world, all providing background about the town before and after a suspicious accident.  While the game does sometimes infer ‘the incident’ as having a certain meaning, Ash will outright state the real purpose behind it all.  It dawdles this strange line between an ecological and emotional intention; and since there’s so little to go on, the idea isn’t as effectively explored as Ash’s personal journey.

Though it may seem tangential, I do believe there is another aspect to consider about Denska: the interplay between gameplay and the story of reviving the town.  Like Entwined before it, these mechanical metaphors are married cohesively in regards to its core concept.  Having this open-ended, leisurely means of painting tulips, tall trees, and more onto virtually every wall compliments Ash’s artistry and combats the seedier elements that made Denska rot.  How you wish to go about accomplishing these tasks is typically up to your unique eye when painting the town red, yellow, blue, and every hue between.  Aside from a genie’s requested sketches, so long as exuberant life is drawn you’re being implicitly rewarded to see this town resurrect into something more positive and vibrant. 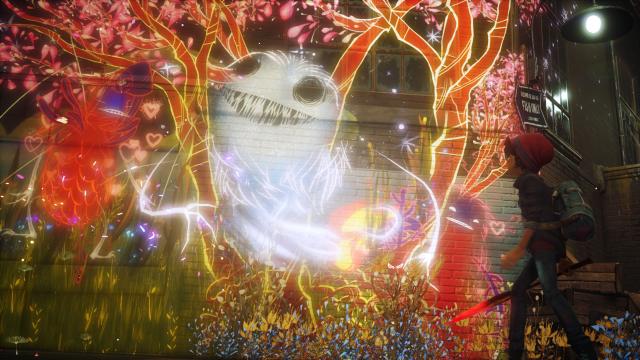 Though I truly think Genie’s main hook warrants articles examining this dynamic between gameplay and story, it’s a shame just how quickly it runs out of gas.

The first issue that struck me is the mechanics.  Not since Lair have I been so quick in rushing to the options menu to turn off the default motion control scheme.  The template is simple: each collected page has a pattern that Ash previously made—either landscape or creature oriented.  With them you’re able to highlight the design, designate a spot on the wall, hold R2 trigger, and use the controller light bar to contort its size.  And while painting a mural isn’t equivalent to the dreadfulness of Lair’s motion-controlled flying scheme, the annoying amount of times I had to reorient the controller’s light bar was too much.  I don’t have the patience for it.  Transferring over to the tactile feel of the control stick is a decision I believe most players will make.

The next issue comes from the design.  All of that interpretative analysis regarding mechanical metaphors is there, but rarely built up in a meaningful way.  Completion isn’t as simple as painting everything; there’s a collection of lights strewn about specific walls and when all of them are on an earlier impediment is removed.  A wrinkle in painting some portions is how The Darkness invades some walls, which requires Super Paint to destroy.  Super Paint is only given by your constructed Genies, which have specific art requests to fulfil before earning their happiness.  So, in essence, it becomes this repeated cycle of painting areas with lights, appeasing a newly-constructed Genie when appropriate, and using Super Paint to paint infected walls occasionally bedecked with lights.  Because the tasks feel too aimless it—unintentionally—sapped my creative ambitions as time went on.

There could’ve been something more substantial with the Genie puzzles too.  Zones have certain Genie variants in order to complete a puzzle, but they’re often too rudimentary to feel like meaningful interaction has taken place.  Just conjure up art prints the Genie demands and they’ll perform said task—rather slowly, I might add.  There were a few occasions I became so frustrated at how slow they responded too; three specific moments I questioned if calling them (L1) had simply broken their programming.  Response time aside, it’s shocking how quickly the limitations crop up in regards to your influence on the world or the potential creativity you can employ.  Ironically, the gameplay loop and the Genies’ requests become more and more rote as Ash becomes more artistically fulfilled.

This isn’t all there is to Genie’s gameplay, however.  To obfuscate spoilers as much as possible, I’ll say the 7th-inning transition is why there’s a difficulty setting.  What would be categorized as an ‘art game’ in its incipient stages transforms to an amalgam of the beginning’s sensibilities and Jet Set Radio.  “Where have you been?” I asked.  The moment-to-moment gameplay feels visceral, the tasks more immediate, and it subverted expectations while honoring the previous foundation.  I’d be more antsy to latch onto this praise were it not so ephemeral and the “combat” so unbalanced.  I selected Hard difficulty to start but didn’t finish on it.  I could have, but the cheapness of the last two encounters—the final boss especially—broke me.  The dynamics in respect to the condensed level layout and exasperating structure makes me question why there’s anything higher than normal difficulty.

In essence, Genie has a mixture of purely creative & action ideas that don’t feel fully considered.  The endless possibility I felt in the first chapter slowly faded as the gameplay structure combining basic puzzle-platforming, half-hearted stealth segments against the bullies, and magical painting felt more constrained the further I progressed.  Additionally, one whole design pack is exclusive to the Digital Deluxe version.  Later changes feel more exciting but have issues of their own.  What could’ve been a wonderful gameplay tapestry comparable to a Van Gogh becomes more questionable and random a la Jackson Pollock. 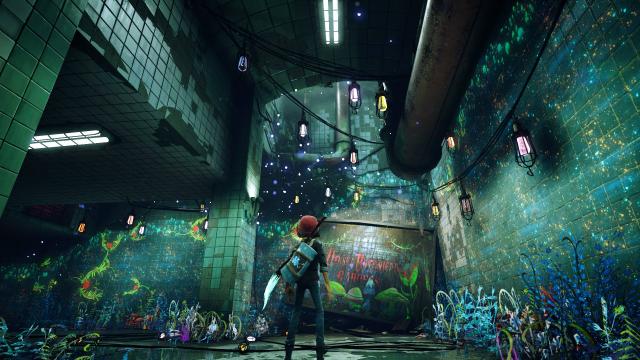 The Van Gogh comparison is more attributable to Genie’s great artstyle and environment.  Aside from the different color transitions, PixelOpus borrows from Laika Studios (Coraline, Kubo and the Two Strings) in respect of their animation style, which is most obvious in the characters' stop-motion facial animations.  Each moment feels impeccably captured and compliments the world.  Credit is also due to the sheer amount of interactivity allowed.  There are so many blank canvases to stamp Ash’s premade sketches onto and so many different patterns.  Even on a standard PS4 there weren’t any major technical hiccups that distracted me from going nuts whenever I felt so compelled.

Sound design hits all the basics and complements the warmer atmosphere.  As with the design, Sam Marshall’s soundtrack is often hitting the expected melodies of yet another indie game™ but is still well-produced and effective.  Voice acting is the one aspect that’s hit-or-miss.  Whether in movies or video games, young-teen or tween characters can be a dice roll to cast.  At times, it’s a tough call whether to place blame on the underwhelming line delivery or the occasional cringe-worthy line on its own, but most of the time I think they hit the mark.

Value is a more interesting aspect to judge and it puts me in a tough spot because I currently don’t have the means to test out VR mode.  The VR Experience requires a VR headset (naturally), two PS Move controllers, and a PS Eye.  Since I’ve only recently acquired a headset, I’m put in a financial bind, having to shore up more money on pricey extras just to experience this extra.  You’re better off looking elsewhere to see how substantial that mode is.  What I can assess is the modest runtime of the five hour campaign—supported by unskippable cutscenes, and the potentially-endless Free Painting mode.  As can be grasped by my previous complaints, Free Painting was more of a light distraction for me but could have more value for those who click with the mechanics. 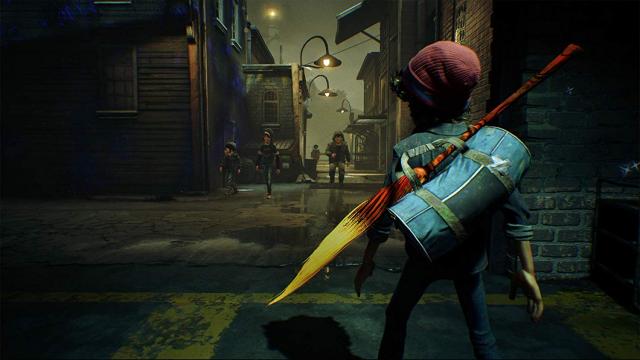 In conclusion, Concrete Genie taps into a creative wellspring that wants to emphasize player creativity, but doesn’t commit to it in a meaningful way.  And I was among the first to have hoped otherwise, as there is something incredibly potent at its heart.  PixelOpus harnesses the empathetic theme that no villain, real or imagined, can ever take this one foundational aspect away from you: your creativity.  This alone could be enough to carry you throughout all of its respective modes, but it wasn’t enough for me.