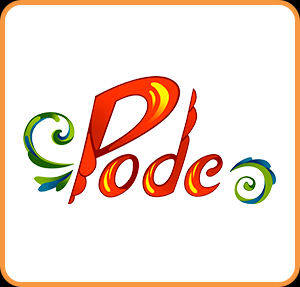 Between a rock and a hard place.

Pode is an adorable game. If you play through this co-op puzzler to the end and don't feel triumph, sadness, and joy, your heart might be as stony as the game's co-star, Bulder. Inspired by Norwegian culture and starring an anthropomorphic rock and shooting star, Pode is a relaxing, artistic puzzle game designed around two players operating in tandem. It's filled with lovely music and visuals, features two fun characters with contrasting abilities, and boasts a mostly gentle learning curve. Some of the game's puzzles can be abstruse or fussy, and a few fixed camera angles make platforming difficult, but overall this is a decent entry in the co-op puzzle canon.

The narrative intro to Pode is short and to the point. A wayward shooting star named Glo lands on Earth, startling a lonely rock named Bulder. Soon, they're off on an unlikely adventure to scale the interior of Mount Fjellheim, to give Glo a high point from which to return to the stars. Norwegian developer Henchman & Goon mines a lot of dramatic potential out of this small, simple story. Every success and setback for the adventuring twosome is felt viscerally; it's impossible not to root for them. 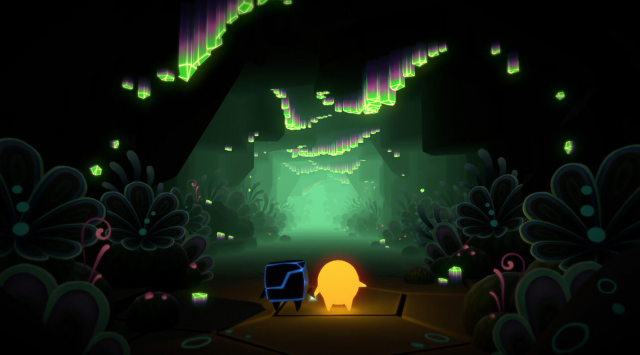 Pode is entirely beatable with one player, but it's best experienced with a friend in local co-op. Bulder and Glo each have unique abilities necessary to solve environmental puzzles inside the mountain. One player, controlling Bulder, can pick up stones and turn rocky switches to open doors, while another, manipulating Glo, can use light to grow leafy platforms. Thus, each player feels special and integral to the process. Playing solo, a single player can swap between the two heroes with a quick button press.

Most of the puzzles in Pode work fine. There are simple types in the game's beginning where one character will use the other as a platform to reach a high point and more challenging multi-part riddles in later stages where new abilities require thinking several steps in advance. Different environmental designs add to the variety. One stage has several bodies of water — tricky because Bulder sinks and Glo floats — while another is spent in darkness. In between the mandatory puzzles are several optional, hidden murals, illuminated by Glo, and gems, grown by Bulder, that add a second layer of challenge for completionists. 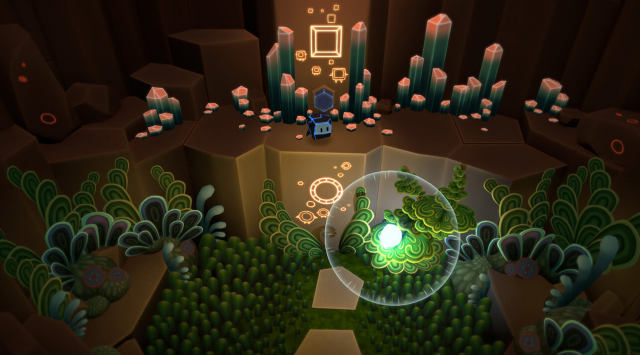 While the game introduces new problem types and powers at a slow, deliberate, mostly-even rate, there are a handful of puzzles that are either difficult to understand or finicky. One example very early in the game involves four pillars and four switches, and no instructions. The solution involves uncovering a symbol displaying the correct sequence, but that symbol is off-screen and shrouded in darkness. Others, especially those oriented around Glo's glowing aura, are frustrating in a different way. Some require pixel-perfect precision, and several micro-adjustments, to light the way forward.

Pode's fixed camera angles can cause some consternation, also. Each stage has its own camera placement, and while the camera will pan and zoom depending on character movement, the isometric perspective can cause a few falls during platforming sections. 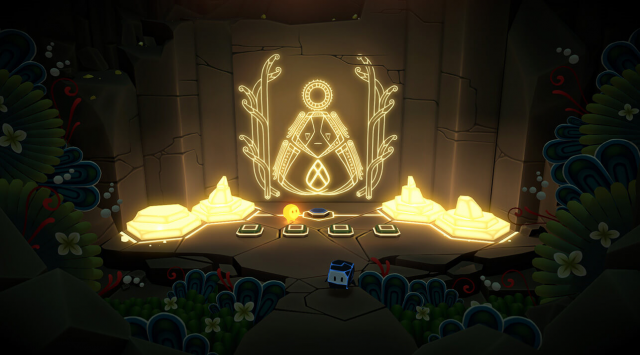 While isometric camera angles might make jumping tricky, they offer clear, unimpeded access to the game's lovely artwork. Pode has a clean, bright visual style, with lots of lush, verdant flora and glowing rock formations. One of the simple joys of this puzzler is to watch as Bulder and Glo traverse each level, triggering explosions in plant and mineral growth. Bulder will uncover jeweled veins in the mountain and Glo will bring forth ferns, bushes, and vines. All this happens alongside Austin Wintory's relaxing, soulful musical score.

There's something undeniably charming about Pode. Its adorable characters, meaningful story, lovely art, relaxing music, and satisfactory puzzling gameplay make it worth a look, especially for co-op enthusiasts. A few fussy or cryptic puzzles, a troublesome camera, and an inferior single-player experience might keep others away.

This review is based on a digital copy of Pode for the NS, provided by the publisher.