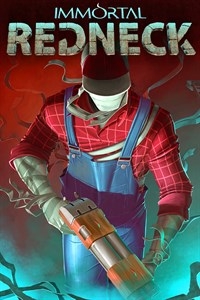 One glance at this title is enough to pique one’s interest as to what on Earth this game is all about. It certainly sounds intriguing, but does the gameplay measure up to the epic nature the title promises? To my pleasant surprise, the answer is yes; at least in some respects. Sure, developer Crema’s indie shooter is a little rough around the edges compared to the Halos and Call of Dutys of the world. Yet, at the end of the day, Immortal Redneck proves to be an enjoyable and wacky fast-paced FPS that’s somehow managed to fly under the radar.

Immortal Redneck exists in a mythology-meets-history realm of Ancient Egypt, where magic-wielding gods and strange monsters run amuck. You, a foul-mouthed, stereotypical redneck, have awoken to find yourself transported into these perilous lands which are crawling with a cacophony of creatures and demonic beasts, all of whom are out to end you. You must run and gun your way through three pyramids - each containing a handful of floors with mazes of adjoining rooms - while fending off these foes. There’s almost no narrative to speak of, but for my money, this emphasis on raw, undiluted gameplay is part of what draws me in. It strips the fluff, throws you right into the action, and it rarely lets up. 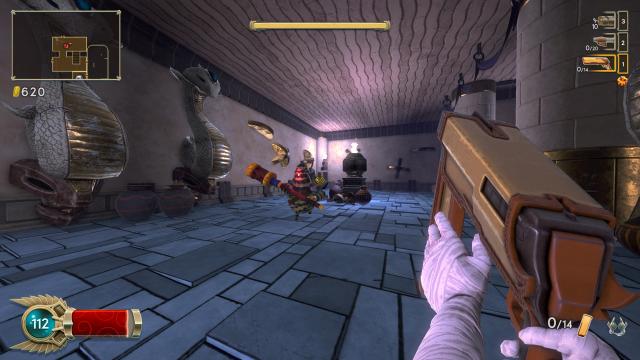 Almost every room comes with gaggles of different baddies containing their own behaviors, and you're barred from leaving each area until you’ve wiped out all monsters inside. At least in theory, the goal is to fight your way to a boss that awaits you at both the midway point and the top floor. Of course in reality, this will likely yield many deaths and failed attempts, as the game can be relentlessly gruelling, and you’ll have to settle for naught but a couple of thousand coins for your efforts. Trust me - this redneck might be strong, but immortal he is not.

And this is really the only degree of consistency throughout, because the game relies on random “rouge-lite” elements for the bulk of its content to keep you off-balance. Buffs - which come in the form of obtainable scrolls - weapons, and even the floors themselves are all randomly generated, ensuring something of a unique experience during each run. You’re granted a few default starting weapons, which can - and usually should - be swapped out on the fly with more impactful varieties as you progress. Weapons can come as enemy loot or from treasure chests, and run the gamut from basic pistols and revolvers, to potato launchers and massive chainguns. 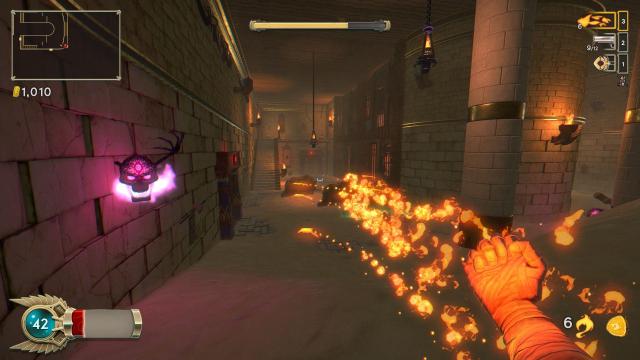 A good chunk of Immortal Redneck’s appeal lies in the randomized elements, which keep things somewhat interesting despite some pretty straightforward FPS gameplay. Goofing around with randomly acquired weapons and abilities for the first time, like a flashy new crossbow machine gun, or orb-firing energy gloves, made me feel like a kid at Christmas. Scroll buffs provide a degree of depth and excitement as they can swiftly and drastically change the dynamics of the game.

You may be thrown a bone by landing a scroll that triggers loot drops from broken vases scattered everywhere, or granted a boost to your offensive firepower. On the flip side, you could also get screwed over by the Immortal Redneck gods, which I was certainly no stranger to. You might have your strong weapons swapped out for lame ones, or lose a large chunk of your health in exchange for a measly couple more scrolls. Rooms can be massive chambers riddled with baddies and death traps, adding insult to injury by being a dead-end, or they can be smaller enclosures sprinkled with loot and foes that are pushovers. In this sense, Immortal Redneck is almost a game of chance as much as it's an experience that rewards raw skill and grinding.

As many Rogue-like aficionados might be aware, this genre comes with another gruelling, and often downright frustrating element. When you die during a run, it’s game over, and you’re dropped back outside the towering pyramid you just spent the better part of an hour fighting through. Saves - even temporary ones - are nowhere to be found here, nor are checkpoints of any kind. The only aspects that carry over from game to game are stat boosts and extra characters, which are gained by spending obtained coins on a skill tree and an unlockable merchant. The idea of course is that while the game initially puts you through the grinder, over time you will eventually grow strong enough to overcome the various hurdles and knock out each dungeon’s boss. 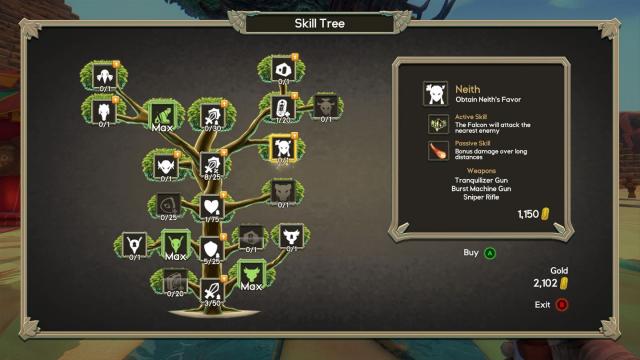 As if the pyramid interiors, appropriately-themed soundtrack, and plagues of enemy frogs weren’t enough to drive the Egyptian theme home, you can even unlock new characters in the form of Egyptian gods. This colorful cast of heroes typically increase your odds of survival, as they wield things like magic staffs, energy orbs of death, temporary invincibility, and healing powers. This is where the game makes that extra leap from your more typical FPS feel and takes a step into Skyrim territory with its magic abilities - albeit on a far more basic level. Fun unlockables like these go a long way in stringing you along for “just one more game”, as you strive to get a little farther than your last playthrough, knowing this time you’re a bit better equipped.

Despite the unique themes, cartoony overlay, and random goodies that decorate Immortal Redneck, you’re still getting a pretty standard FPS using a Binding of Isaac dungeon-crawling formula laced with early 2000s visuals. Things do have a tendency to look a bit bland, at least until reaching the more visually interesting environments of the second and third pyramids. It’s perhaps fitting, then, that the mechanics tend to feel a bit “loose” and floaty, which is partly reminiscent of the Quake and Unreal Tournament days of yorn.

While it’s fun playing around with the weapons, they don’t really have a sense of tactility or weight to them. I can't attest to the older PC release, but on most of the weapons I played around with, the aiming is fairly easy on the Xbox One port at least. General movement can feel a touch slippery and imprecise, especially when dancing around traps, lava pits, or hopping across small platforms. Clearly a game that features Egyptian Gods flinging neon energy spheres at floating flaming skulls isn’t going for realism anyway, but the mechanics can feel somewhat cheap at times, which can take you out of the experience somewhat. 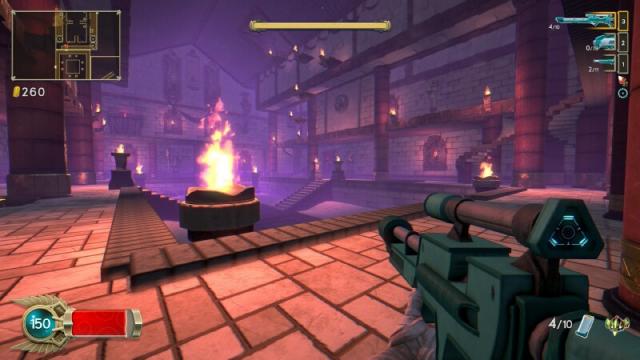 Still, everything works well enough to provide the template for a fun, action-packed romp, and Immortal Redneck does offer that at its core. There isn’t a ton of content to be had, and the game can verge on repetition, but the plethora of random elements and customization usually keeps the blandness at bay. Those that appreciate a good, straightforward shooter or a gritty, oldschool dungeon crawler should find plenty of enjoyment from this off-the-wall FPS.

This review is based on a digital copy of Immortal Redneck for the XOne, provided by the publisher.