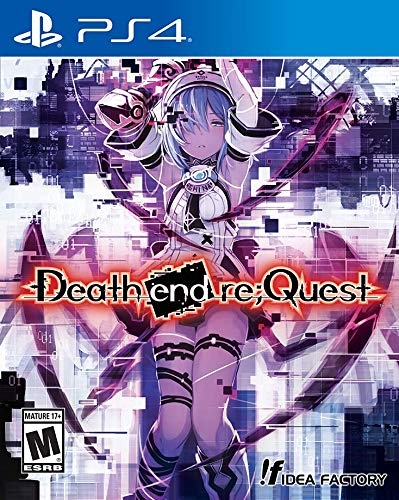 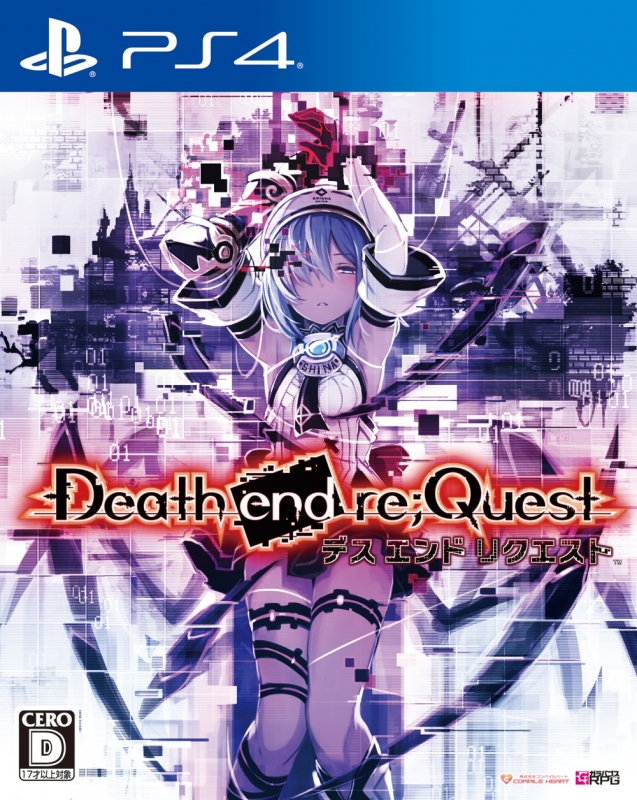 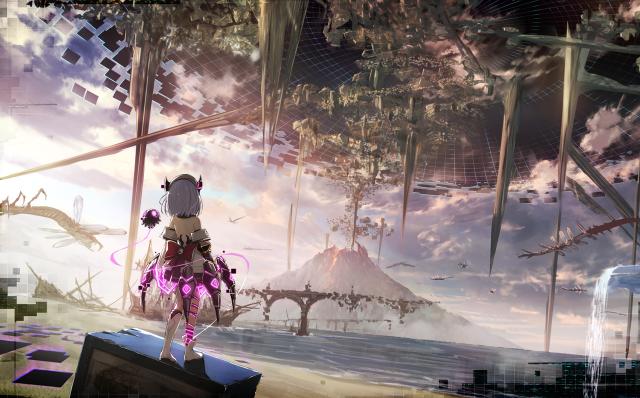 "Can you survive 99% bad ends?". Such is Compile Heart’s catchphrase to attract customers to the newest game from development studio Galapagos RPG. The developer, not having met much success since Fairy Fencer F, has attempted to provide both originality and a compelling game system with its latest title. Like all the previous games from Galapagos RPG, Death end re;Quest is a turn-based JRPG, but this particular title features a substantial visual novel element. Having gathered more development talent from both within and outside the company, can it set Galapagos RPG back on track?

Arata Mizunashi is your average game programmer, living a normal life until the day he receives an e-mail from his colleague Shiina. Nothing unusual at first glance, except that Shiina had been missing for more than a year at this point. Not only that, but the message actually comes from a World’s Odyssey account - part of a VR game he had been developing before its sudden cancellation months ago. Unexpectedly enough, World’s Odyssey's servers are functional. Astonished but relieved at the same time, he eventually finds Shiina… trapped in the game. 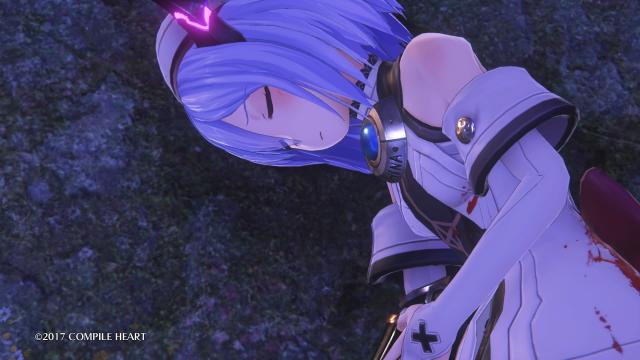 Death end re;Quest boasts the deepest scenario ever for a Compile Heart game. The man behind the writing is none other than Makoto Kedôin, creator of the Corpse Party games. Shiina has lost her log out option and must therefore clear the game in order to wake up. Arata is, of course, determined to help her from his desk, since he can still modify the coding of World’s Odyssey. But the game progression doesn't just consist of making Shiina advance until  the final boss. The clever point of the story is that things happen in the real world as well as where Shiina is; there are as many, if not more plot twists and huge reveals on Arata’s end.

Often, Shiina will find some out-of-place items that belong to the real world and tip Arata onto a fresh lead. He'll go on to investigate a series of paranormal phenomena which have been multiplying since World’s Odyssey started being active again. Very dark, those sequences maintain a real sense of suspense throughout the narrative. Many dangers surround Arata and his situation becomes more desperate with every chapter, from hacking, to blackmailing, and even murders.

The soundtrack is quite uneven but two or three songs like the superb Hôkai Odyssey help reinforce some especially emotional parts. The general idea expressed behind the story is also fairly interesting and allows for deeper thinking - can technological evolution break the boundaries between artificial beings and real people? And with what consequences? 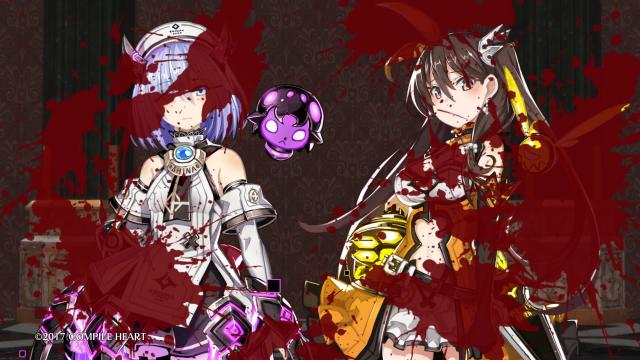 In order to fuel the eerie atmosphere, Galapagos RPG has implemented numerous bad endings into the story. In many cases, dialogue will task the player with making choices and one of the options will lead to a tragic outcome and a special game over screen. Death end re;Quest thus features a strange and rare challenge of collecting game over screens, which reward you with items and funds after you reload your save. It's important to stress at this point that, yes, the game generally gives you the option to save during dialogue sequences.

But this innovation has its flaws, one being the low level of investment put into the title. Lots of these bad endings are nothing more than a small excerpt of text placed on a black screen. Few actually have an accurate illustration and an interesting alternate ending to tell. In the end, I wasn't left totally satisfied because there's a sense of a major missed opportunity there. The lack of investment also hampers the narrative, which relies too much on descriptive text. A few more cutscenes would have improved storytelling immensely. The game also blocks saving during dialogue scenes some of the time, which means you seriously risk losing quite a lot of playtime at times.

As usual in Galapagos RPG’s games, the battle system in Death end re;Quest is absolutely unique. Each character can use three skills in a row, be they attacking, guarding, or healing types. That opens up a large array of strategic options - ideal to face every type of situation. All characters move freely within the battle area and each has their own specific playstyle. Claire and Lily can, for example, attack or heal from afar, while Celica masters long and brutal close-combat combos. But the most interesting character turned out to be Al, who has deeply tactical defensive capabilities. 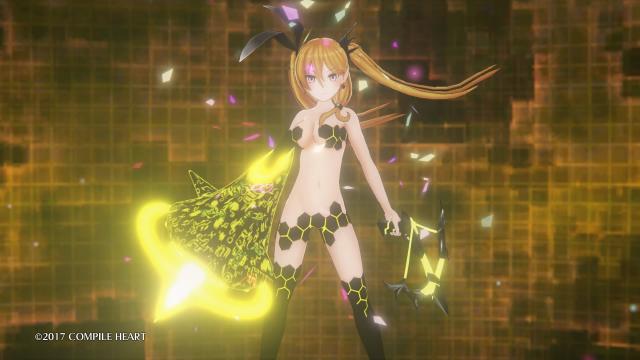 But there’s a lot more. In every battle you find colored spots which are part of a buff/debuff system. Walking on such spots will cause HP damage but the character will recover SP (used for magic and skills) instead. They can also grant you a positive status, but there are also spots with huge penalties. Their most important use is in increasing the corruption level of the heroines. When the percentage reaches 80%, the character enters what is called a glitched state: her look changes, her main stats reach 9999, and she can use her ultimate skill. From his computer, Arata can also turn spots into a more favorable color. Be cautious, though, because reaching 100% corruption means immediate KO. It’s all about choice and risk-management.

Generous in terms of battle options, Death end re;Quest also includes other features like the possibility of summoning boss monsters you’ve already beaten, or even changing genre! Arata can tweak World’s Odyssey for one turn so that the battle takes the form of a fighting or puzzle game, among other styles. For example, the battle screen will show the character in third person view with sights to shoot out bursts of energy towards the opponent. This 'install genre' feature, as it’s called, is unfortunately not always advantageous, which diminishes its importance in the long term.

The real key to victory is what’s called 'knockback'. Some skills can blow an opponent away towards the edge of the battle area, and each time it hits a border or an obstacle it loses a certain percentage of HP. The point is that allies can smash the monster back in another direction for even more hits. By placing your characters effectively, you can achieve swift victories. 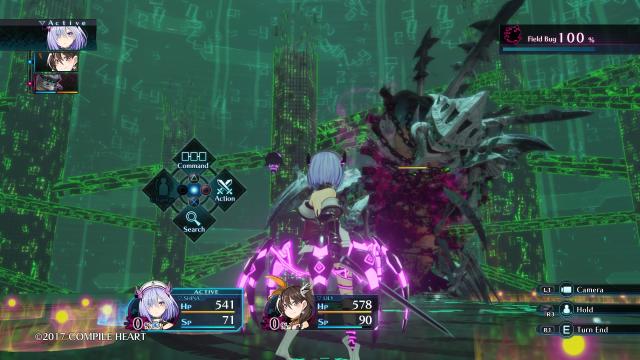 But that is only in theory, since Galapagos RPG failed to fix a recurrent flaw regarding battles: they’re way too long. Spending 15 minutes on a random battle on the world map is just exhausting. Enemies are way too resistant, even in normal mode. Boss battles can last one or two hours, so you need lots of patience. The game itself lasts about 30 to 40 hours. I was also disappointed by the lack of freedom. The game is entirely linear in both Arata’s and Shiina’s parts. There’s a bonus segment called Pain Area and several endings for those who tackle a 2nd walkthrough, but the mediocre level design might put you off doing so. 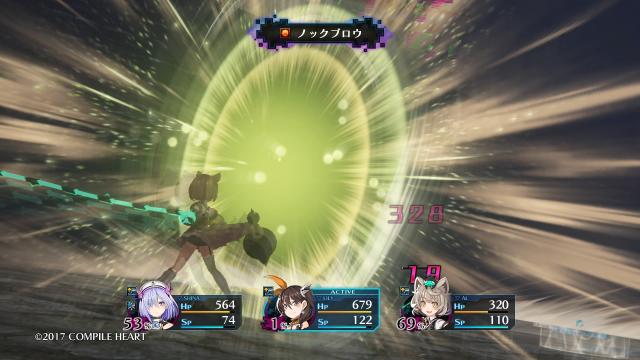 Visually, there’s definitely an improvement compared to older RPGs made by the studio, but Death end re;Quest isn’t quite on par with standards established even by developers of comparable scale (Gust, D3 Publisher). Some characters or backgrounds look better than others, and overall the visuals range from mediocre to pleasant.

As in Makai Shin Trillion or Mary Skelter Nightmares, Nanameda Kei’s designs are the main attraction. The heroines are super sweet and the glitch form lives up to Compile Heart’s tradition of sexiness. Ranging from insect monsters to little mascots flying around the girls, the main visual theme revolving around technical bugs is well fulfilled. Even in-game prices are purposely bugged (some potions cost less than the normal price).

Death end re;Quest retains Galapagos RPG’s will to innovate with each new game, this time with better execution overall. However, it’s still a budget RPG and the lack of investment holds it back from being the great narrative experience it aims to be. Nevertheless, the good combat system, compelling design, and a scenario that's much deeper and more interesting than usual have the ability to hook the player despite the title's flaws.

This review is based on a retail copy of Death End re;Quest for the PS4