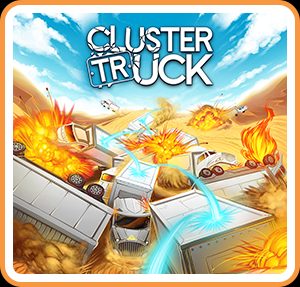 An inspired but ultimately aggravating take on 3D platforming.

Clustertruck is made for the gif. With its unpredictable physics, death-defying stunts, and high probability for player failure, it's a game best summed up with a gif or a Twitch stream or a YouTube video filled with hilarious rage. In short, this title, a high-concept 3D platformer set atop moving trucks, is meant to be watched. The question then, is this: is it meant to be played? Well, it's complicated.

On paper, the premise of Clustertruck — a first-person physics-based platformer on top of a speeding highway — is inspired. It's weird and clever and different enough to make a splash among 3D action games, and, for a while, it works. When the controls click and the game's random collisions work in your favor, there's nothing quite like dashing, jumping, and launching through a level, bouncing off airborne trucks like Neo from The Matrix. The game's sense of speed and preponderance of near-misses makes for a sometimes thrilling experience, no doubt.

Regrettably, the theoretical greatness of Clustertruck all too often translates into real-life frustration. Some of its levels are almost impossibly difficult. It's not uncommon to breeze through the early stages of one of the game's nine themed worlds only to hit a wall, and get bogged down for an hour. Several features make the game so trying: first-person platforming in general is difficult; the platforms are constantly moving forward; players need to restart a level if they touch the ground or a wall (or anything that's not a truck); and there's no use memorizing individual levels, as random physics make each run slightly different.

Imagine the toughest Edmund McMillen platform game — Super Meat Boy or The End is Nigh — then add a third dimension and throw in some rogue-like randomness, and you start to get a sense of how demanding Clustertruck can be at its most sadistic. 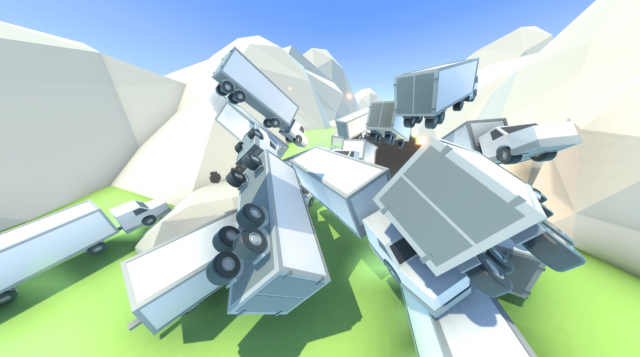 Mercifully, developer Landfall included in Clustertruck a suite of power-ups, which make the title's most gruelling levels more manageable. There's levitation; air dash, useful for closing short gaps; truck boost, which boosts the truck below the player; and many more. All are unlocked with points earned by performing tricks and completing levels, and players can equip two at a time. The two most useful, by far, are double jump and time slow. Without them, beating the game becomes a Sisyphean task; with them, almost everything is doable, excluding Clustertruck's final and hardest level, 9-10.

Had Landfall made some of the meanest levels optional bonus stages, or even allowed a few skippable levels per world, Clustertruck would be a more enjoyable experience. As it stands, you'll need to play them all to get to the end. At some point, on the thirtieth attempt at a particularly nasty jump or hazard, the game stops being fun. 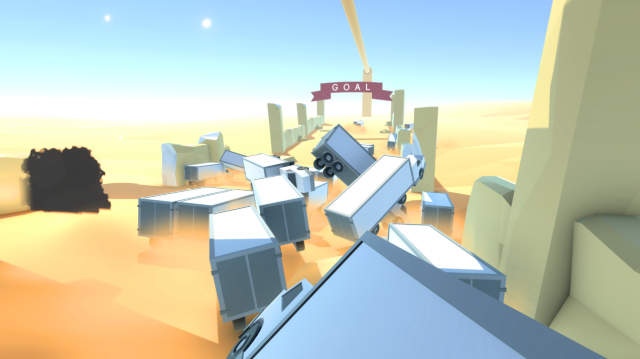 It's a shame that marching through the game's levels becomes such a slog, because each themed world offers a lot of unique twists. Laser world is filled with - you guessed it - deadly lasers. Medieval challenges you with swinging spiked clubs and flamethrowers. Sci-Fi adds into the mix launch pads, and Steampunk introduces grinding gears. The Switch port also includes ten Halloween-themed levels and five winter holiday-inspired stages, which came to the Steam release of Clustertruck after launch. Unfortunately, Switch didn't get the PC version's level editor.

Clustertruck is a great, inspired idea. That idea never makes a proper translation from the theoretical to the practical, however.  The game's high level of difficulty and randomness make for some entertaining gifs and rageful videos, but also lead to an often aggravating gaming experience. It's better watched than played, in the end. There you can sit back and observe, voyeuristically, as others are put through the wringer over and over. When you experience the pain and failure first-hand it's a lot less amusing. In the immortal words of Mel Brooks, "tragedy is when I stub my toe; comedy is when you fall into an open manhole and die."

This review is based on a digital copy of Clustertruck for the NS, provided by the publisher.