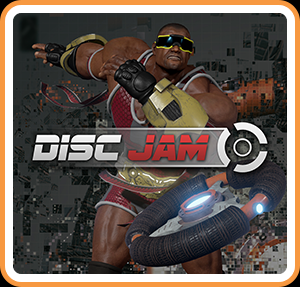 Online is hot but offline is not in this air hockey-tennis hybrid.

In a 2016 interview, High Horse Entertainment described Disc Jam as "Windjammers meets Mario Tennis meets NBA Jam." While that's an apt comparison, it's missing another essential element to the game's melting pot: Rocket League by Psyonix. The similarities are striking. Both games debuted on PS Plus, both upend a well-worn concept — soccer for Rocket League and air hockey for Disc Jam — and both aspire to eSports greatness. Yet, for all those commonalities, Disc Jam is more like Psyonix' freshman effort Supersonic Acrobatic Rocket-Powered Battle-Cars — a promising start not ready for the big leagues.

Combine tennis with air hockey and you have Disc Jam in a nutshell. Each player takes a position on one half of a court with a wall separating both sides. Players then toss a spinning disc back and forth, scoring points by A) landing the disc on their opponent's side of the court or B) throwing the disc into an end zone at the back of the court. Unlike tennis there are no faults or even a court boundary. Surrounding the court is a paneled wall that deflects incoming discs, much like air hockey. 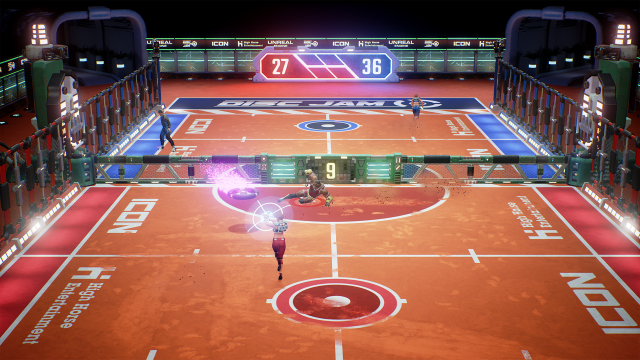 In terms of these rules and the mechanics that underpin them, there's not much to complain about. The concept here — a medley of tennis, air hockey, and, at times, volleyball — is sound. Moreover, High Horse Entertainment (the twosome of Jay Mattis and Timothy Rapp), props up the concept with a host of defensive and offensive moves, and impressively-deep strategic gameplay.

There are basic moves like angled throws, lobs, and drop shots, and more advanced techniques like shielding, super moves, and super returns. There's a handy tutorial that helps explain the wide range of movement, attack, and defensive options, and, best of all, a "ghost arcade" option that recreates real online players as AI test dummies. In this way, players can test their mettle against serious opponents offline before joining the real thing online. 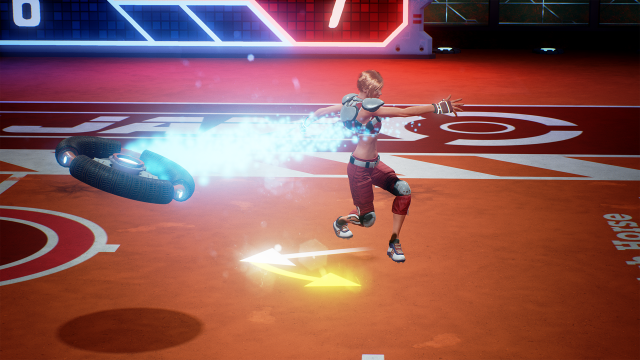 It's online where Disc Jam works the best. The Switch version supports cross-play with PC players, and it's easy and fast to find a match thanks to hosted private matches on dedicated servers. In addition, season one of ranked leagues is coming soon, with a pre-season live at the moment. All this points at High Horse Entertainment's commitment to online stability and replayability. Lost in all that, however, is a robust offline experience.

If you plan to play Disc Jam as a solo player or even with friends via split-screen, you may want to think twice. While the game offers up decent fun when connected to the internet, it's slim pickings offline. There isn't a proper campaign — no, Ghost Arcade doesn't count — and the whole thing suffers from a disappointing lack of variety. The game supports only six characters (two of which are locked in online play but mercifully unlocked offline), the same four songs, and only one court. A collection of courts with different rules, hazards, and surfaces would make this a more compelling purchase, as would a story mode. 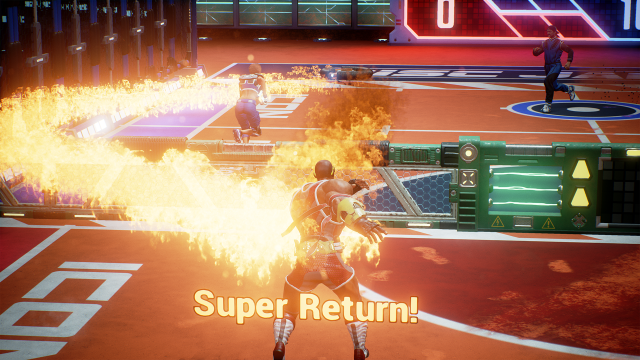 Local multiplayer is another sore spot. It's restricted to split-screen (at least in singles) and, consequently, disorienting; dividing an already busy playing field in half just doesn't work. It's easy to lose track of your character and the disc. Doubles is a more satisfactory experience, as two players in couch co-op share a single, undivided screen.

Although Disc Jam suffers from a lack of characters and courts, it supports a wide range of customization options. Using "Jamelons," the official currency of the game, players can unlock the two locked characters Kahuna and Lannie, or buy capsules from the Prize Machine to obtain new emblems, tags, skins, taunts, victory poses, and discs. Jamelons are earned by competing in online matches. Alternatively, players can purchase them with real world money in the eShop. The appearance of microtransactions is regrettable, but at least there are ways to circumvent the paid system — although those ways come with an unavoidable grind. 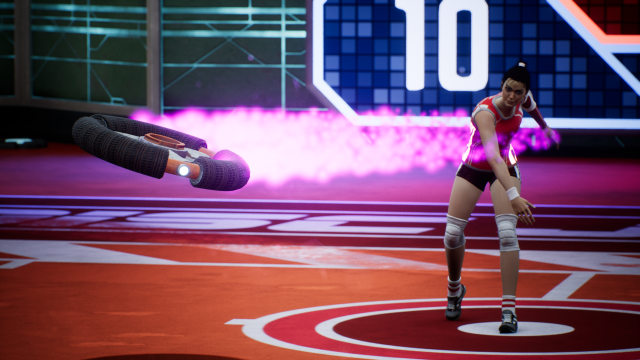 On a technical level, Disc Jam is mighty impressive, all the more so since it's essentially the work of two men. Mattis and Rapp, leaning on Unreal Engine 4, achieve a smooth 60 FPS on Switch, 1080p while docked and 720p undocked. Image quality and textures are similarly impressive. The only real downside are character models, which appear strangely plastic and move stiffly — almost like G.I. Joe action figures. Art direction isn't noteworthy in general. Designing attractive assets was probably a tertiary concern for a two-man team focused mostly on mechanics and netcode.

There is a quality nucleus buried inside Disc Jam, covered up with a disappointing offline component and a lack of variety in general. The rules and mechanics provide a strong foundation, but more content (characters, courts, and modes) and more polish will be necessary to make the next big leap. Perhaps, as was the case for Supersonic Acrobatic Rocket-Powered Battle-Cars, Disc Jam is just a few years and a few tweaks away from something special.

This review is based on a digital copy of Disc Jam for the NS, provided by the publisher.