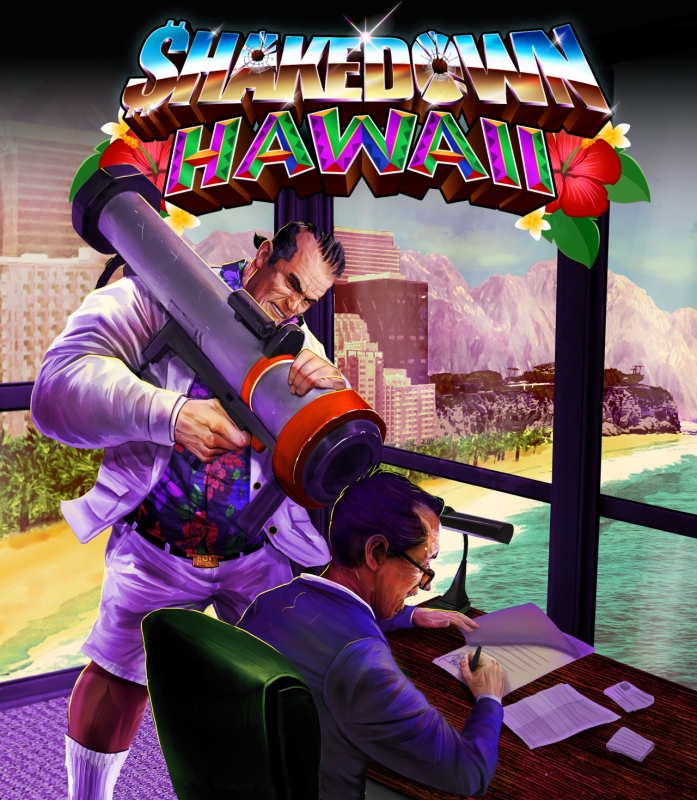 Video games are a medium uniquely primed as a vehicle for satire. Not only can a game use irony and humor to highlight a political vice or social stupidity; it can make you an active participant in the misdeed. Shakedown: Hawaii, the latest from independent developer Brian Provinciano, takes advantage of the properties unique to video games and delivers a cutting, comprehensive takedown of big business and all the cynical methods associated with it. Deployed inside an urban open-world and buttressed by some accessible, engaging business simulation mechanics, it's a solid follow-up to Provinciano's 2012 8-bit gem Retro City Rampage.

Where Retro City was a send-up of pop culture, Shakedown sets in its sights the world of big business. It stars an aging, out-of-touch CEO, whose company Feeble Multinational is nearly bankrupt. Having invested in VHS tapes, taxi services, and diet soft drinks, the CEO can't imagine a world of streaming television and Crüzer (a nod toward Uber). In order to rebuild his empire, forestall a hostile takeover, and maybe—just maybe—bring the entire island under his control, the CEO recruits his screw-up son, a South American "fixer", and all the unscrupulous business people he can find. Their goal: embrace the cynical strategies that define the modern business world. 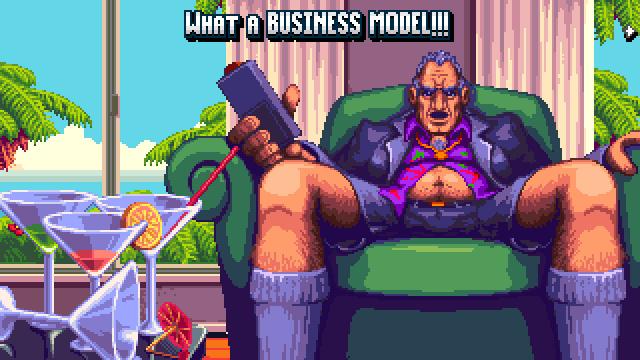 It's not quite as laugh-out-loud funny as its spiritual predecessor, but Shakedown: Hawaii is far more subversive. The ways in which it pokes fun at rule-bending multinational corporations, market manipulation, and slavish consumerism is clever, topical, and thoughtful.

Equally thoughtful is the gameplay loop that sustains the narrative. Like Retro City, Shakedown is a top-down open-world action game, similar in perspective and mayhem to the early Grand Theft Auto titles. Quite unlike Retro City, Shakedown injects into its sandbox formula a significant simulation element. Not only will the CEO find himself carjacking and tangling with police; he'll also find time to purchase buildings, manipulate the housing market, and manage a portfolio of assets and income streams. It's a combination that could go sideways fast, but under Provinciano's light touch, the two disparate pieces marry well.

Unexpectedly, the business side of things emerges the winner. Shakedown ditches much of the minutiae of business strategy, focusing on the most approachable and understandable parts of empire-building. From a map of the island, players can purchase hotels, convenience stores, and eventually larger pieces like malls, then increase each property's revenue with hilariously-sarcastic multipliers—add "sponsored content" to a building to increase proceeds 3.5%, for example. From another screen, they can get a bird's eye view of company assets, daily revenue, personal salary, etc. It's easy to learn, and more than a little addictive.

Some shops won't sell at first; it's here where the game's signature shakedowns come into play, and where business strategy and real-time action dovetail. Playing as the CEO, or one of two other playable characters, players can demand protection money from a shopkeeper, thus opening the business up for purchase. While the early shakedown attempts prove amusing and interesting—some owners or franchisees will call in a gang of thugs, while others won't relent until you damage enough goods—the process turns repetitive before long. 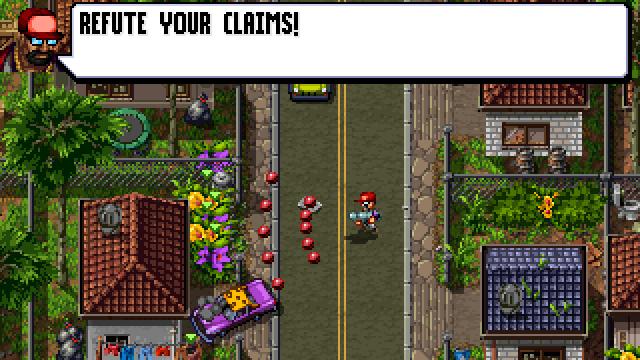 Repetition is the most glaring issue with Shakedown: Hawaii, in general a clever, entertaining genre mash-up. The game can only do so many inventive things across 83 shakedowns, 15 side quests, 111 main missions, and 415 properties on the market. Eventually the tasks repeat, and the novelty of real estate collection wanes. It hurts too that many quests are short and forgettable. Fewer, longer missions would improve the experience.

The freedom and accessibility of Shakedown's open world offset some of these structural issues. Players can come and go as they please, stealing vehicles, entering dozens of buildings, participating in weapon and score challenges, collecting charging cables, playing mini-games, and unlocking achievements. Controls are smooth and intuitive, twin-stick aiming comes naturally, and vehicle commands—assuming you picked the automatic option—are some of the most buttery you'll every try. If you'd prefer to bounce around Hawaii on your own, sans a narrative thread, you can skip or delay the game's 8-10 hour campaign, and head straight for Free Roaming Mode. 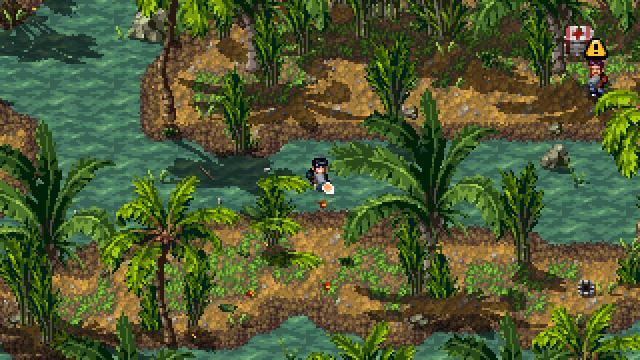 Whether in Free Roaming Mode or Story Mode, you'll probably stop to take in the game's luscious 16-bit graphics. Featuring animated NPCs, destructible environments, verdant jungles (seriously, the trees alone are almost worth the asking price), and chunky sprites, it's a game that caters toward both 90s era nostalgia and modern indie expectations. Music, by Matt Creamer, is a perfect complement. The synth beats celebrate the game's old-school sensibilities and wink at a protagonist stuck in the 1980s.

Shakedown: Hawaii has a lot to do and see, and maybe even more to say. Its musings on the state of the business world and the consumer are funny and often edifying, and the way it makes players complicit—by empowering them to lie, cheat, and steal toward success—is ingenious. Some tedious missions and repetitive tasks notwithstanding, it's a winning combination of social satire, business strategy, and open-world action.

This review is based on a digital copy of Shakedown: Hawaii for the NS, provided by the publisher.