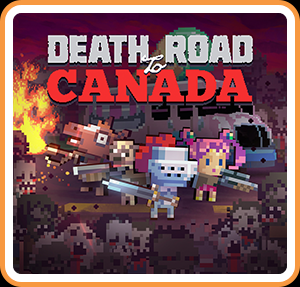 Take a road trip through the zombie apocalypse in this fun, repetitive rogue-like.

Death Road to Canada is the baby of Oregon Trail and The Walking Dead, delivered by Dudley Do-Right. It's a rogue-like zombie survival game with a heavy choose-your-own-adventure element and a dark, irreverent sense of humor. You will join a ragtag group of survivors on the long trek from Florida to Canada, a rumored place of safety, comfort, and universal health care.

There's not much of a narrative in Death Road to Canada, apart from the cross-country odyssey through zombie-infested locales. Since everything is randomized, there aren't specific NPCs to meet or landmarks to visit. That said, each recruited survivor has his or her own personality, which reveals itself in funny dialogue throughout the trip. Basically, the game's story has only a fixed start and end point, and the pages in between are written by you the player. 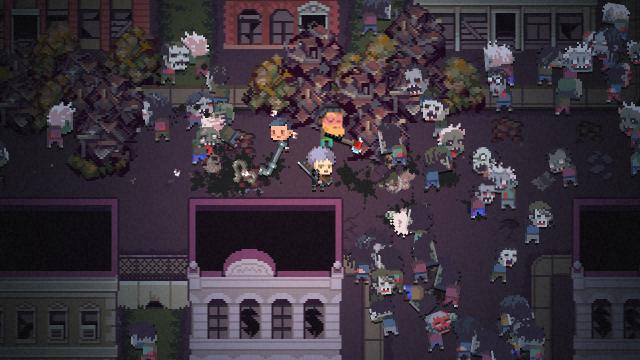 This high degree of randomness and freedom of choice makes every experience in Death Road to Canada a new one. You can't prepare for or predict what the game will throw at you, which, of course, is the blessing and curse of the rogue-like. If you get unlucky and stumble upon a bandit camp midway through your travels from Florida to Canada, your trip might end prematurely; conversely, your party might encounter a super-strong special character, who carries the rest of the team on his or her back, all the way north.

Unpredictability affects equally both stages of the game: decision-making and fighting/looting. During driving (or walking, if you're unlucky enough to run out of gas) sequences, Death Road to Canada poses to the player a series of dilemmas. When confronted with robbers in the middle of the road, do you confront them or waste extra gas to drive around? Do you recruit a new survivor to bolster your ranks, even though it means another mouth to feed? Picking the right option at the right time might mean the difference between life and death; sometimes, true to reality, there isn't a right option. 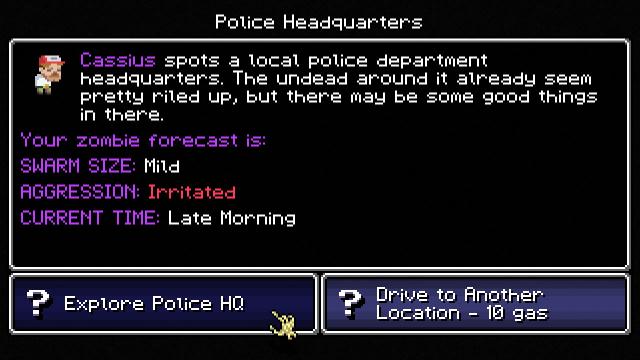 You will need to make frequent pit stops, and it's here where the game transforms from the academic to the visceral. The action sequences in Death Road to Canada play out like a simplified version of a 16-bit 2D brawler, e.g., Final Fight, Streets of Rage. Once you pick your destination — an abandoned apartment building or an arcade, to name a couple of examples — you'll equip your survivors with up to three weapons (fewer for certain special characters) and send them out to loot. Resources like gasoline, food, medical supplies, bullets, and unique weapons are vital for the journey, and they're mostly found amid hordes of the undead.

Fighting is a very basic affair: players can attack with the Y button and swap weapons with the A button. While everything is mechanically simple, it's sometimes thrilling — at least before the "been there, done that" feeling kicks in. Each derelict building and (supposedly) vacant apartment might hide a cache of food or a hunting rifle; it might also hold a horde of zombies. That's the simple joy of Death Road to Canada: facing the unknown.

Death Road to Canada is punishing. It makes you pay for mistakes and, sometimes, it makes you pay regardless if you made all the "right" calls. Death comes easily and is permanent. Whether you enjoy the game depends greatly on your pain threshold, and your capacity for dealing with a heap of randomly-generated bad luck. The game's final gauntlet — two back-to-back timed survival episodes followed by a mad dash across the bridge to Canada — is especially arduous. If you frustrate easily, this isn't the title for you. 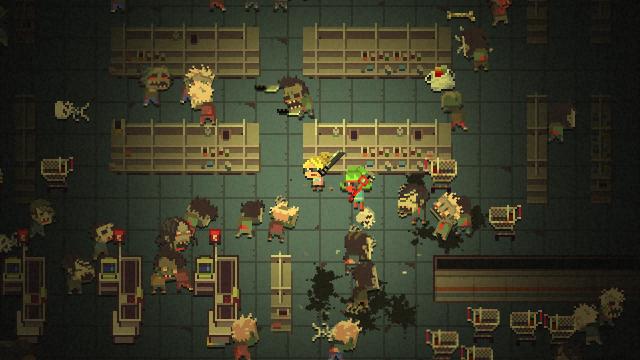 Fortunately, the game includes a few concessions to make subsequent runs less painful. Hidden at random throughout the game are "zombo points," which are used in the main menu to unlock perks and attributes that can then be assigned to custom-made characters. Starting a new run with a custom character with higher-than-average healing or shooting skills gives players a fighting chance in the zombie apocalypse.

There are also several optional modes, some of which are ostensibly easier. There's "Familiar Characters" mode, where most recruits are based on custom characters. "Make your friends and family, and they'll show up in the game!" says Death Road to Canada. There's also "Rare Characters" mode, where the rarest and most powerful survivors are more likely to appear, and "Long Winding Road" mode, where the number of driving days is higher, but the time to prepare for the gruelling final day is extended. All these and several others are playable with a friend in local co-op.

While a plethora of modes and a nifty character creator tool add a lot of diversity to Death Road to Canada, the game starts to lose its novelty after a half dozen runs. Yes, randomized environments and moral dilemmas bring spice to each adventure through zombie-land, but the nuts and bolts of the game remain steady despite the narrative curveballs. You can only loot so many stores and bash so many zombies before you've looted and bashed them all. 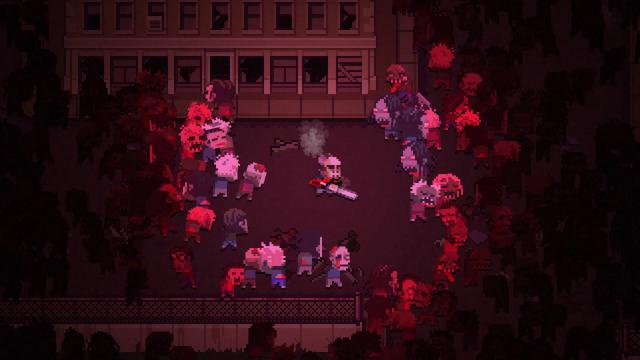 It doesn't help either that the game has a relatively simple aesthetic and soundscape, with many recycled assets and tunes. The lack of audiovisual variety is mitigated, however, by some fascinating rare characters — including Valkyrie, a Norse warrior woman with a winged helmet who carries Mjollin'er (a play on Mjönir) — and a clever sense of humor with plenty of pop culture riffs.

Death Road to Canada is a game that's fun in small bursts, especially for rogue-like fans. While its gameplay loops start to age after a while, its collection of modes, character creation tool, and naughty, knowing sense of humor keep things interesting.

This review is based on a digital copy of Death Road to Cananda for the NS, provided by the publisher.