It's Lemmings meets Pikmin, in VR.

Pop-Up Pilgrims is the VR love child of Lemmings and Pikmin. It's a cute, colorful puzzle-platform game where a floating cloud god directs a troupe of pilgrims on a quest to reclaim sacred scrolls stolen by demons. Developer Dakko Dakko's use of VR is effective and immersive, and its paper craft aesthetic is lovely. Unfortunately some of the game's admittedly smart platforming and puzzle ideas are left unexplored, and many of its levels and bosses are too easy.

The premise of Pop-Up Pilgrims is simple and straightforward. A horde of demons has absconded with the floating cloud god's sacred scrolls. Powerless without them, the god summons a gang of faithful followers to retrieve his missing property. On their quest, the puny pilgrims will cross chasms, build bridges, slay demons, and topple boss creatures, all along a series of 2D platforms. 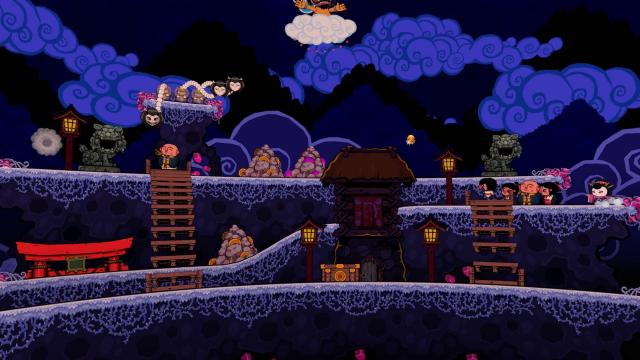 The point of each of the game's 60+ stages is to 1) get at least one pilgrim from the beginning of the stage to the exit gate and 2) hit a 400 point minimum (surviving pilgrims and collectible octopus statues are worth 50 points each). In true Lemmings fashion, each pilgrim will wander uninterrupted until he/she hits an obstacle or the player, as the floating god, issues him/her a command. Players must use direct commands and, at the same time, leverage items on each stage's platforms to succeed. For example, "guide leaves" send pilgrims into the background or foreground automatically.

The most common command is an all-purpose roll jump, which functions as a jump, an attack, and an item switcher; it's here where the PSVR's head-tracking tech pays off. By looking at an individual pilgrim with the VR headset, and "hooking" them, you'll be able to aim the oblivious believer with a tilt of your head and then launch him or her using the L2 button. It's a remarkably smooth process, and it allows you as the player to quickly send multiple pilgrims in many directions without cycling through them or fumbling with a series of button presses. In a title where split-second decisions mean life or death, VR earns its place at the table. 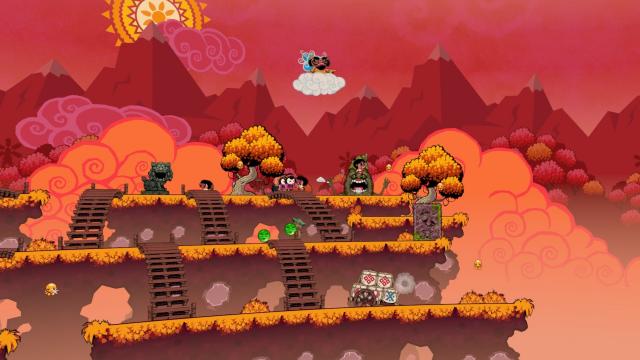 VR will also allow you to survey the beautiful paper craft panoramas of Pop-Up Pilgrims. Inspired by traditional Japanese and Chinese prints, and bearing some resemblance to games like Yoshi's Island and Tearaway, the artwork on display is colorful, stylized, and routinely stunning.

For all its technical efficiency and aesthetic vibrancy, Pop-up Pilgrims stumbles somewhat in the diversity of its mechanics and, in general, a charitable level of difficulty. While each of the game's six worlds enjoys a unique hook — world six, for example, features platforms that shift upon each lightning strike — Dakko Dakko doesn't spend enough time riffing on them. New gameplay wrinkles pop up at regular intervals, yes, and keep things interesting; the appearance, about half-way through the game, of frozen fixtures that freeze pilgrims into slippery blocks of ice is especially refreshing. Yet, you never get the sense that these mechanics have reached their full potential. It's all enjoyable, but on a superficial level. 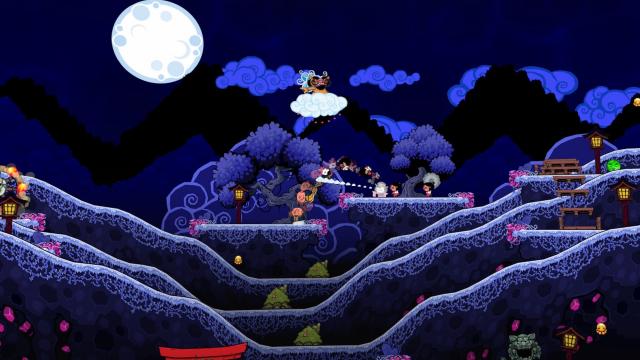 Exaggerating this issue is a very generous learning curve. Apart from some levels in the back half of world six, Pop-Up Pilgrims is a pushover. There's a disappointing shortage of stages with lots of moving parts, where players need to move back and forth across the game map to keep their worshipers alive. A few challenging optional bonus levels would have worked wonders.

Even though it's on the easy side and some of its clever mechanics don't reach their potential, Pop-Up Pilgrims is an entertaining VR experience, particularly for fans of Lemmings, Pikmin, and real-time strategy. Dakko Dakko has implemented its gameplay ideas effectively in virtual reality, and produced some striking visuals that truly pop.

This review is based on a digital copy of Pop-Up Pilgrims for the PS4, provided by the publisher.